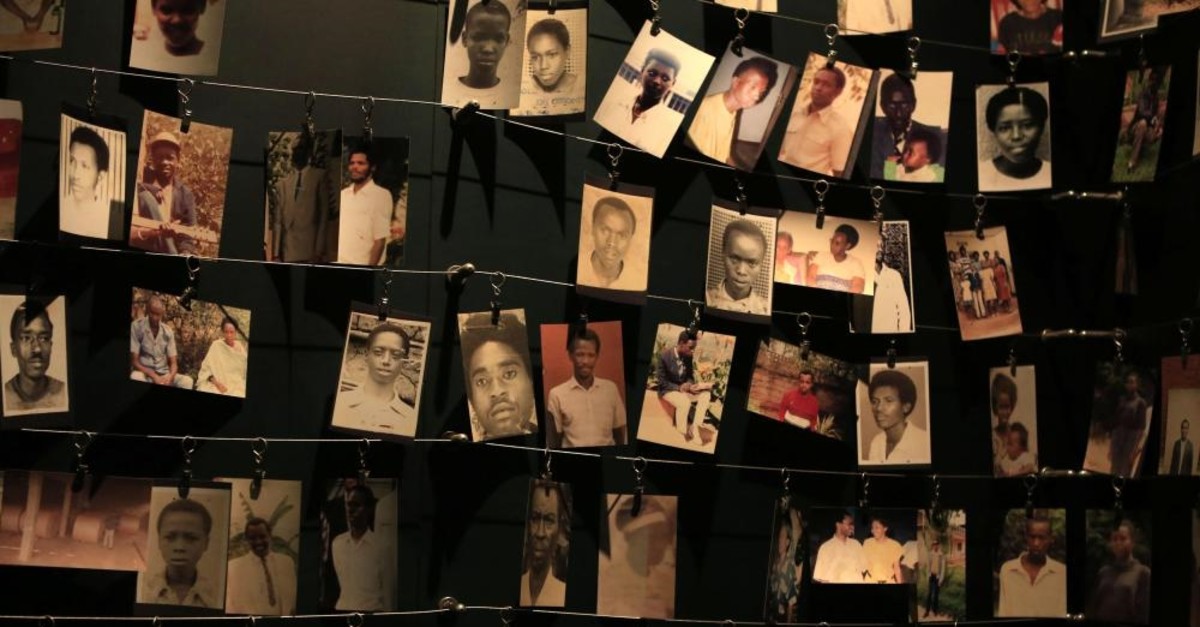 Photographs of people who were killed during the 1994 genocide are seen inside the Kigali Genocide Memorial Museum, in the Rwandan capital Kigali, April 5, 2014.
by Ahmed Al-Burai Apr 25, 2019 12:10 am

President Recep Tayyip Erdoğan has been relentlessly stating that Ankara is ready to declassify more than 1 million documents related to the 1915 events. He's also been calling for the Armenians to disclose their documents. Moreover, he went even further to pledge that if an "independent panel of historians" concludes that this was genocide, then Turkey is ready to be held accountable. Nonetheless, French President Emmanuel Macron signed a "political" decree last week setting April 24 as a day of the annual commemoration of what he labeled a "genocide" against the Armenians. Macron's decision is a fulfillment of one of his 2017 presidential campaign pledges. France is one of the first major European nations to recognize the events of 1915 as "genocide." More than 20 other countries have followed suit, including Canada, Germany and Argentina. Turkey's Foreign Ministry said, "It is inevitable that France's attitude, which is far from amicable, will impact its relations with Turkey in a negative way."

Turkey's Foreign Minister Mevlüt Çavuşoğlu has also criticized the French decision, saying France should "look at its own dark history."

Çavuşoğlu made the comments during a tense exchange of words with a French lawmaker Sonia Krimi, from Macron's LREM (Republic on the Move) party, who criticized Turkish comments saying she was shocked.

Legally, Macron's proclamation recalls the European Court of Human Rights (ECHR) ruling that said the Holocaust is an established historical reality, documented in world courts. However, the events of 1915 do not fall into this category. For a crime to be categorized as genocide, the killings must have been planned in advance and perpetrated for the sake of intentional forcible eviction and annihilation of a certain ethnic group. Therefore, genocide is a very finicky legal notion that, additionally, needs to be sophisticated to be authenticated or substantiated.

At the same NATO meeting in Turkey, Çavuşoğlu said: "France is the last country to teach Turkey a lesson on genocide and history. We haven't forgotten what happened in Rwanda and Algeria."

Critical pundits claim that Ankara's staunchly overreacted with an exaggerated sensitivity, noting that none of the Western governments would feel affronted when historians set their judgment on their ancestors' atrocities.

For instance, those critics argue, the current German government shouldn't be held accountable for the Holocaust. But the irony here is that the Nazi's crimes are incontrovertible. While, when it comes to the events of 1915 some historians, including Turkish, admit the killing of Armenians, yet assert that what happened doesn't amount to genocide, predominantly because the substantiation doesn't exist. Therefore, it's purely infuriating for any sovereign state to accept the accusation of its predecessors of committing genocides. What makes it worse is when the accuser has an indisputable dark history of massacres.

Was the French government happy with the Rwandan government's report accusing French officials of complicity in the 1994 genocide?

The report, prepared by a Washington law firm, concluded that French military forces trained their Rwandan counterparts among the ethnic Hutu leaders provided them with munitions even after an arms ban and gave cover, under the patronage of a U.N.-sanctioned humanitarian mission, in the last moments of a genocidal campaign. Some 800,000 people, mostly Tutsis, were killed.

Similarly, France is not expected to be ecstatic when the archives of another opaque page in her recent history in the former colony Algeria is opened. Hundreds of thousands of Algerians were massacred; as estimated in 1964, the nearly eight years of revolution against French occupation caused 1.5 million deaths from war-related causes.

Likewise, would the U.S. be happy to have another country designating what happened to Native Americans as genocide or perhaps class the transatlantic slave trade in the 15th-19th centuries as a crime against humanity?

Will Germany accept its ancestors' massacres of indigenous Namibians a century ago, an estimated 10,000 from the Nama tribe, and 24,000-100,000 of the Herero were massacred.

One has to legitimately wonder, why hasn't Germany formally labeled its ancestors' crimes as genocide, still it willingly takes full responsibility for the Holocaust?

What about the white settlers and British forces who crushed the Mau Mau rebellion in Kenya in the 1950s. At least 320,000 Kenyans were forcibly evicted to concentration camps. Over a million innocent civilians were placed in circumvented villages. That might be assessed as a minor felony when compared to the ferocious heartless carnage against Indians. Mike Davis reported in his book "Late Victorian Holocaust" that the policies of the British state killed between 12 million and 29 million Indians.

The list goes on with the West's merciless mayhem: the Tasmanian genocide, the use of collective punishment in Malaya, the bombing of villages in Oman, the dirty war in North Yemen, the evacuation of Diego Garcia.

Hey Western democracies, are you serious when preaching moral lessons?

All those recent massacres were not admitted and neither forgiveness nor redemption was asked for the victims' families or even an apology. What does this highlight if not Europeans' double standards and hypocrisy? If the object is truly ethical and Europe is morally motivated to ask Turkey to accept its history, then principally, these "democracies" need to reconcile with their own dark ages.

Any state is naturally upset when another country dictates its history. The tribunals that were held in 1915 convicted a great number of soldiers of dereliction of duty by committing various offenses and massacres against civilians. Turkey acknowledges its history, adding that many ethnic Turks also suffered in the conflict, but it doesn't put this into the category of genocide.

It seems absolutely peculiar for Western "democracies" to give themselves the privilege of being the moral arbiter of the world; it can only be perceived as a form of expiation for its own historical sins and to divert attention from the dark chapters of their own histories.