Military coups and the death of colonialism 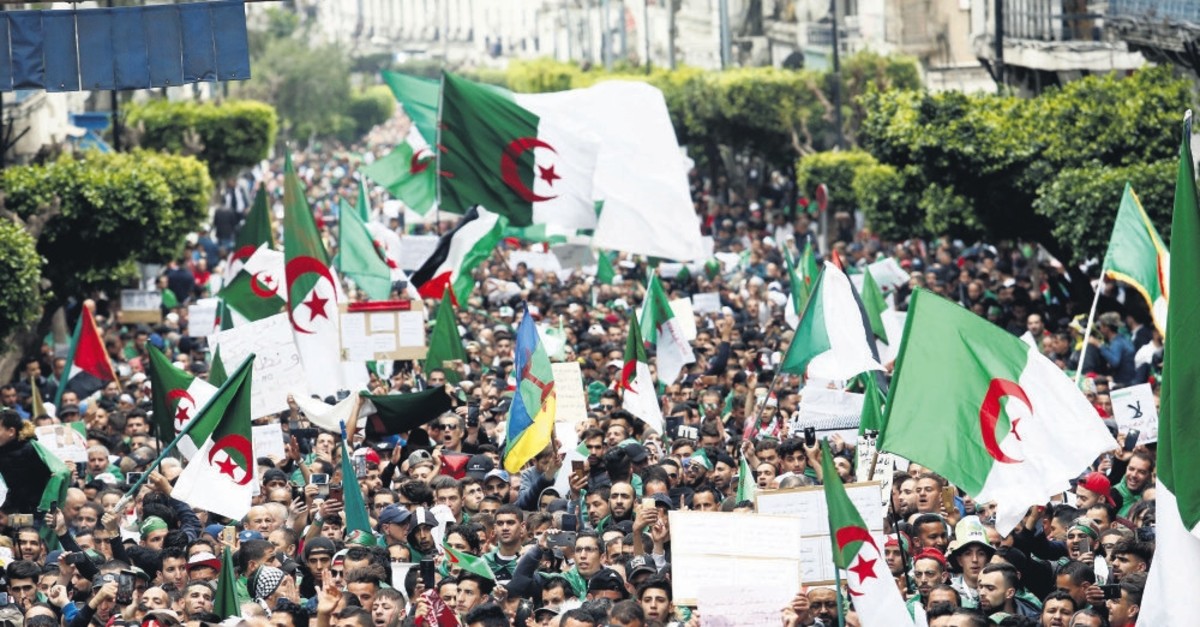 Demonstrators hold flags and banners as they return to the streets to press demands for wholesale democratic change well beyond former President Abdelaziz Bouteflika's resignation, in Algiers, Algeria, April 19, 2019.
by Abderrahmane Amor* and Nazmus Sakib** Apr 25, 2019 12:10 am

Upon independence, liberal states in the international arena establish founding principles for their growth. One of these core principles is a commitment to the flourishing of the democratic will, regardless of the costs it may incur. Often times, there are attempts to compromise this commitment, either through foreign actors — often the former colonizers — influencing and dictating the internal affairs of a state, or from within in the form of the deeply entrenched military state, or a fusion of both of these phenomena. Regardless, these attempts to abandon this commitment often come into fruition through military coups, plaguing the history of newly independent states in North Africa and the greater Middle Eastern region as a whole. These coups were, and are, reminiscent of the actions of the former colonizer and ought to be seen as transgressions against the ideal of democratic representation. Preventing military coups requires institutions and individuals committed to the principles of the representative foundations of the state, be it liberal or otherwise.

Whereas former colonies inhabited by European settlers, termed "neo-Europes" by many scholars, benefited from the institutional structures of their colonial past, newly independent states in the Middle East and North Africa (MENA) region were deprived from these institutional advantages by the design of their extractive colonial past.

The Algerian civil war of the late 1990s began with an election in which the Islamic Salvation Front won 54 percent of the popular vote – more than double the votes were won by the ruling party. One of the party's leaders, Ali Benhadj, famously vowed "to ban France from Algeria intellectually and ideologically, and be done, once and for all, with those whom France has nursed with her poisoned milk." But the results were not recognized, as generals canceled the election results and staged a coup which was followed by a prolonged and bloody civil war. It was these generals who followed in the path of their former colonizer, and it was this episode that killed the popular dream at infancy.

The Algerian experience, juxtaposed with that of an early American decision to avoid military interference is a stark but real contrast. In 1783, American revolutionary soldiers of the Continental Army of the United States were unhappy that they had not received promised pay or pensions. As a result, a conspiracy to enact a military coup began, with an anonymous letter being circulated around the army camp in Newburgh, New York on March 10, 1783. Five days later on March 15, commander-in-chief and first president of the United States George Washington successfully quelled talks of rebellion in an emotional address to his officers commanding that they support the supremacy of Congress.

Washington's command is foretelling of an American history devoid of military coup attempts; a mere seven years after independence from King George and the British, Washington had placed the ideals and principles of the success of the state over the whims and desires of his troops, despite real and valid complaints of a lack of compensation by these soldiers. Moreover, Washington realized the importance of maintaining the end of the British colonial era and all of its baggage and ensuring the continuation of the new American democratic venture. Washington was free of the burden of satisfying an external power, and more importantly, he had successfully defeated the former British occupier. But a rebellion would have created a new colonizer named George, only this time his title would be president.

Like Washington's wisdom, similar intentions were, and are, required in the establishment of new states post-colonization. In Africa and Asia, many formerly colonized states of the global south strived to decolonize by combating and challenging the direct military rule of European imperial powers. Often times, independence came after hundreds of years of colonial plunder, enslavement, genocide, famine and an absolute degradation of human dignity.

Post-independence, authoritarian regimes established themselves as defenders of the previous decolonization effort. From Sukarno of Indonesia to Bourguiba of Tunisia, these dictators stayed in power for decades. Their rhetoric varied, their titles varied even more so, but almost all of these regimes had and continue to have one thing in common: They serve the economic and geopolitical interests of their ex-colonial masters. The reality is such that the former colonizer sees true democratization as a worst-case scenario; true democratization entails a loss of influence by the former colonizer.

In turn, former colonial powers ensure the safety of their throne. What changed post-colonization was merely that the state's affairs would be managed by representatives of the colonizer, rather than the colonizer themselves. Without acknowledging this path dependent institutional difference, any analysis of why developing countries or Muslim-majority countries do not democratize will be erroneous. True decolonization can only take place after hegemonic powers are repelled from interfering in the domestic political processes of the countries of the global south. Colonialism remained in these states in the form of authoritarian regimes, who oftentimes utilized and continue to utilize the deep military state and military coups. This is the case of Algeria and its long-ruling FLN, or National Liberation Front. The French colonizer realized the need to physically abandon the former Algerian colony, transferring power to a new colonial presence, the army itself.

In essence, military coups elongate the path to democratization by replacing the former external colonizer with an internal one. Both see their vision as being inherently superior to that of the people, and both rule, rather than represent or serve. We are witness to many examples of this reality, including in Algeria today.

We say this to say that the days of external military colonization by imperial powers in most of the majority-Muslim world are numbered. However, intellectual colonization, as well as internal colonial structures are still at play. Algeria may have achieved physical independence from its French colonizer, but 57 years later, France still must verify and approve major changes. A military coup in the early 1990s and a continuation of the rule of the military state are no coincidence; the FLN continues to rule as the defender and representative of the independence effort.

The revolutionary zeal today in the streets of Algeria and throughout the region is a continuation of a deeper decolonization process envisioned by anti-colonial revolutionaries of the 20th century. The people of the global south's struggle to assert their right to self-determination cannot be hindered by military coups or military influence. These protests are only the symptoms, only the tip of the iceberg, and still only the beginning of a dying colonialism.

* Former staffer of the Bernie Sanders for President Campaign and a Ph.D. student in the Department of Political Science at Texas Tech University

** Ph.D. candidate in the Department of Political Science at Texas Tech University