The transformation of Turkish politics since the AK Party 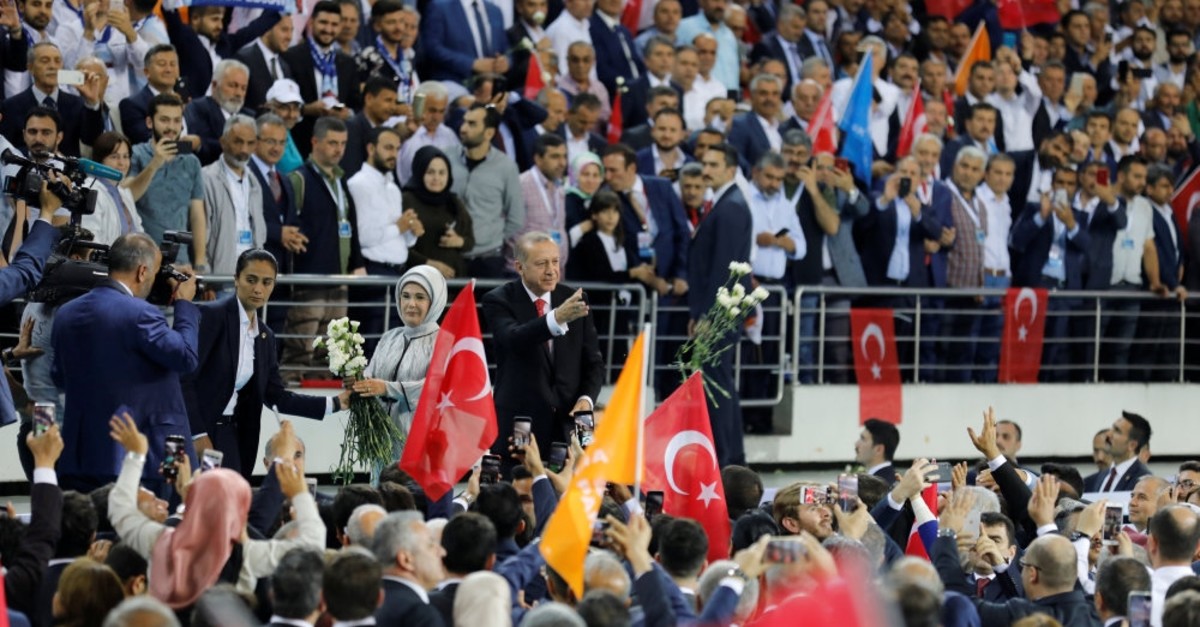 President Recep Tayyip Erdou011fan, with his wife first lady Emine Erdou011fan, greet their supporters as they arrive at a meeting to announce his ruling AK Party's manifesto for the March 2019 local elections, Ankara, May 24, 2018.
by Muhammet Ali Güler Apr 30, 2019 12:10 am

As an emerging economy, Turkey should continue to strengthen its national presence in all fields while focusing on eliminating economic dependence on other countries

Modern Turkey is the cultural heir of two very prominent empires: The Ottomans and Seljuks. A nation such as Turkey, with thousands of years of history behind it, should have a visionary and fundamentally coherent state system for its long-term domestic and foreign policies for its interest and survival.

However, when viewing Turkey's domestic and foreign policies before 2002, it would seem the opposite occurred. Usually, whenever Turkey starts to renew itself both economically and politically, the nation would find itself in a chaotic atmosphere due to internal and external economic, political and social factors.

Turkey has faced dilemmas in its foreign policy due to incidents inside and outside of Turkey, such as military coups, social and political unrest, economic crises, World War I and World War II, the Cold War, the slump of the Soviet Union and the Iraq-Iran War.

Domestically, ever since the establishment of the Turkish Republic, Ankara has hosted different governments, including coalition and military administrations. Unfortunately, Turkey had been the victim of daily internal political rivalries between political parties in most of its modern history up until 2002. It seemed that each government brought its own plans, policies, initiatives and so on. Hence, Turkey could not break the chains holding it back from becoming a true regional and global influencer due to discontinuity, inconsistency and incoherence in both domestic and foreign policies with other countries. However, there have been remarkable changes since 2002 with the continued election victories of the ruling party.

In academic circles, some claim that Turkey has adopted security-oriented, economic-centered, multinational, proactive foreign policies and so on. However, these descriptions did not help Turkey achieve long-standing steady relations with neighboring countries, even among those counted as allies. At the end of the day, Turkey was forced to defend itself after being accused of multiple allegations by many. Therefore, Turkey's past is a rational sample that could project the future of Turkey's prospective interests both regionally and globally.

According to the results of local and general elections since 2002, including the last local elections in 2019, there is no doubt that the Justice and Development Party (AK Party) is one of the most supported and popular political parties in the country's history. It has followed two main principles in its foreign policy; the first being to invigorate Turkey with a robust economy and to re-establish relations with forgotten allies and nations once under Ottoman control.

Economic, political and social disturbances in Turkish policies in domestic and foreign issues have been either eliminated or restored throughout the governments of the AK Party since 2002. There have been critics of the AK Party's foreign policy pertaining to the Syrian crisis, the crisis in Iraq, the Arab Spring, relations with the U.S., Russia and China, and the list goes on. However, there have been both effective and ineffective initiatives and policies in the AK Party's era as well. The following are such examples.

Turkey has seen improvement in economic and humanitarian fields thanks to the efforts of state and private agencies, such as the Turkish Cooperation and Coordination Agency (TİKA) and the Humanitarian Relief Foundation (İHH), in various countries such as Indonesia, the Philippines, Thailand, Somalia and so on. Turkey's emergency and humanitarian aid fund increased remarkably between 2015 and 2019, from $3.2 billion to $8.2 billion. Furthermore, Turkey was the most charitable country with a budget of over $8 billion in 2017. The voice of a Somali individual still resonates in my ears. He said, "Turkey respects Somalis, sees Somalia as equal partner and does not steal Somali resources like some other countries do."

There is also the thriving credibility of Turkish military forces that have been stationed as peacekeepers in many nations such as Afghanistan, Bosnia-Herzegovina and Qatar. As a result, Turkish recognition has been increasing day by day thanks to the Turkish military forces stationed internationally. There is a consensus that the cooperation between the ruling party of Turkey and the Turkish Armed Forces (TSK) on regional and global issues reflects quick, decisive, preventive and deterrent policies.

Influence in the Muslim world

Furthermore, increasing Turkish influence has been felt across the globe, mainly in Muslim nations. This has been aided by certain developments, such as an increase in the number of Turkish cultural centers, like the Yunus Emre Institute and the Turkish Maarif Foundation, around the world.

There has also been an increase in the participation and activeness of Turkish private sectors across the world in educational, trade, humanitarian, social and cultural initiatives.

The alliance between the AK Party and the Nationalist Movement Party (MHP) shows that lawmakers from different backgrounds can come together to work for the sake of Turkish people. This would have a positive impact on both domestic and foreign policies due to increasing political and economic stability. Hopefully, this alliance, called the People's Alliance, will be both beneficial and long lasting for Turkish regional and global interests.

Objectively, these types of effective initiatives and policies during the AK Party era have played vital roles in establishing a positive, ascendant and stronger image of Turkey in other nations.

As an emerging economy, Turkey should continue to strengthen its national presence in economic, political and social fields while focusing on eliminating economic dependence on other countries. It should be noted that Turkey has achieved tremendous success in its defense industry, such as manufacturing domestic military equipment.

However, the next focus should be on the Turkish economy, since a powerful, resistant and resilient economy will be able to block internal and external manipulation, such as the attempts by the Donald Trump administration in late 2018. Hence, a strong economy will be a critical instrument in restructuring Turkish foreign policy more independently. In my opinion, Turkey should try to change its stances on some issues, a few of which are provided below.

Taking the side of one party over another, rather than being a mediator, such as supporting Hamas and the Muslim Brotherhood only – this is how people perceive it, may not deliver the anticipated results in some regions and cases. Turkey should be open to all sides for better and efficient results. During the AK Party era, Turkey has shown an eagerness to be a moderator between clashing sides. Some instances where this is the case include the Russia-Georgia crisis, the Syrian crisis and the support in the peace process in the Philippines. In some cases, Turkey has accomplished, and in other cases has not been able to accomplish its favored outcome, which is quite normal as a mediator.

World issues shouldn't always be taken on personally. Private organizations or nongovernmental organizations can sometimes handle them, as well.

Sometimes being excessively emotional regarding some policies is naturally related to the characteristics of the Turkish people, and may bring heavy burdens on Turkey, its people and other related parties.

Operationalizing its leadership's constructive, inclusive and moderate stance in domestic and foreign policies could be a solution. While Turkey's humanitarian foreign policy is admirable, a more realistic, pragmatic and economic-centered approach to foreign policy may work for Turkish interests

in the current anarchic atmosphere. This would work in the long run while, at the same time, taking pains to avoid sharp and confronting remarks regarding any other nation unless necessary.

Policies that lean on its global role within and outside international organizations, such as NATO, can be followed. For instance, as an important member of NATO, Turkey has fought against terrorist organizations such as the PKK, its Syrian wings and Daesh while striving to protect the presence and reputation of NATO in this fighting.

If Turkey fails in fighting these international terrorist organizations, it would be frustrating for the alliance. At the same time, there would be question marks in the minds of other member nations who desire global peace. Furthermore, a lack of response by NATO would imply that the organization is unable to provide full back up or would be delayed in responding to threats against its member states. There have been times when history has repeated itself for Turkey. Once again, there are unprecedented events taking place where Turkey has been involved, such as the alarm bells of war between Iran and Israel, or Iran and Saudi Arabia, Iran and the U.S., and the Syrian civil war, the chaos in Iraq, as well as injustices and hypocrisy targeting Turkey. Hence, Ankara has tried to minimize the risks to its people, its survival and neighboring nations. Ankara seeks to optimize the issues in accordance with its economic, political and social capabilities.