Will populists hijack the May 2 England, Northern Ireland votes? 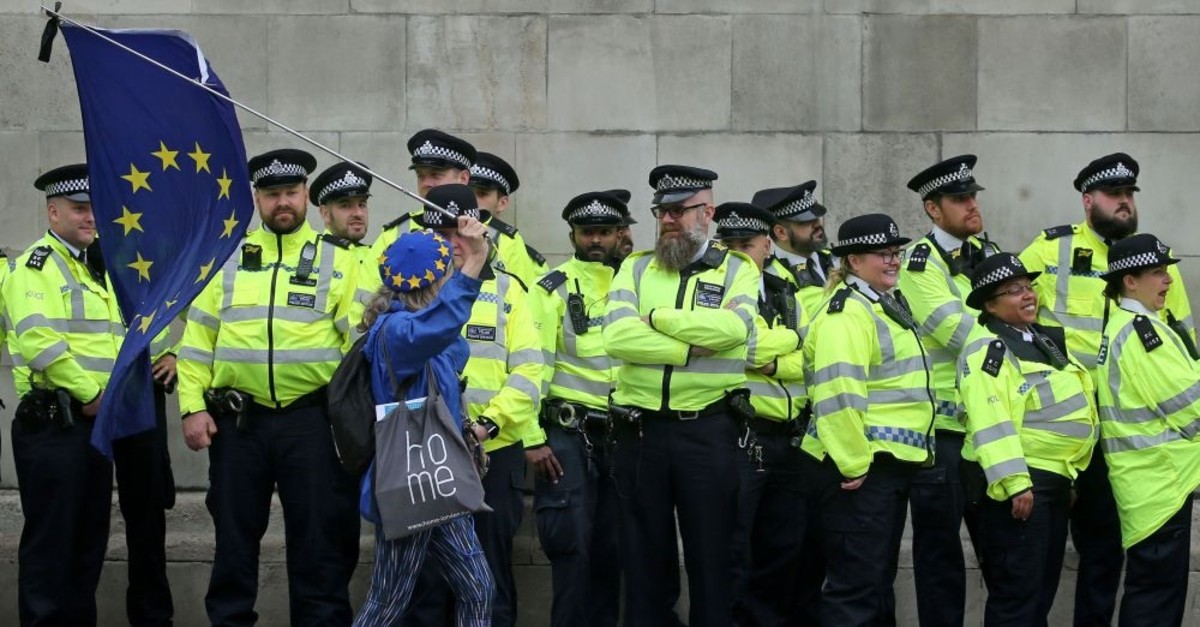 An anti-Brexit demonstrator carries an EU flag as she passes a group of British police officers during the ongoing Brexit and Extinction Rebellion climate change demonstrations, near the Houses of Parliament, London, April 23, 2019.
by Jurgens Klaus Apr 30, 2019 12:10 am

Voter allegiance does not shift overnight yet at times of great uncertainty and during local elections, people may decide to issue a warning note to the central government. Exactly this might happen in a week's time from now when almost all English councils, six directly elected mayors and all of the 11 Northern Ireland councils are up for grabs on May 2; or will it? Exercising this much cherished democratic right – underlining that there is so much more to politics than forming a nation managing government in London only – involves choosing well over 8,000 representatives; by all standards, a more than fair insight into the political mood of the country or at least, very large parts of it. Before we continue let us briefly recall that in the U.K. not all local councils and councilors are elected on the same day, respectively, hence the situation where constituencies vote for their representatives in different years.

The British system is based on the "first past the post" model, for local and national elections as it stands, European Parliament elections are a different matter altogether. Often misunderstood abroad let us look at it by means of a fictional town.

In this imagined constituency, 10,000 voters are eligible to cast a ballot. Now we assume for the sake of clarity it is a highly politicized constituency and each and every citizen decides to go out and vote.

Ten candidates from 10 different political parties stand. Upon the counting process being completed the following result emerges: Candidate A: 4,800 votes, candidate B: 2,700 votes, candidate C: 500 votes, the remaining votes (2,000) distributed amongst the seven other candidates. And the winner is even without having obtained an overall majority (5,001 votes) candidate A, as they came in "first past the post."

On the one hand, this underlines the advantage of the British system – newcomers at least theoretically have a chance of jumping beyond the threshold if strong local issues make an alternative view to the incumbent office holder representing a major party a "hot pick" – just above 1,700 independent councilors already benefit from this opportunity and hold office.

On the other hand, achieving a swing of 1,101 votes (example above) for candidate B to come out on top of candidate A is quite an effort, not even mentioning filling the gap between candidate C and candidate A. In small towns, partisanship is extremely well developed in Britain hence something extraordinary must happen before huge swings of more than 10 percent are ever possible. Let us not forget that the term "from the cradle to the grave" is often linked with describing trade union membership or socialist voter intentions over the generations, similar allegiance levels might hold forth for the Conservative Party, too.

Has voter Brexit dissatisfaction led to new red lines amongst the electorate?

In an off-the-record comment, a high-ranking British politician told me, whilst researching for this piece on location in England, that both major political parties (Labour and Conservatives) will get a hammering at the European Parliament elections on May 23. Journalists should make little use of "anonymous" sources in general, but concerning Brexit and what is about to happen with British politics, few would speak up about their real intentions in public, hence Chatham House it is so, as to better understand.

His take on things is that regardless of which of the two major political colors you sport none of them accepted the will of the people and either watered down Brexit or aimed at stopping it completely, thus rendering the 2016 referendum all but invalid.

So what about local issues? He argues that people have lost trust in mainstream political parties in principal and that there are only two possibilities left to show this to the government, as well as to the opposition: Vote for alternative parties on May 2, and if European Parliament elections are being held, May 23, too. Unless of course there is a snap national election, a scenario not entirely ruled out, and thus a third, or the main opportunity to show the red card.

Can extreme movements prepare for stronger showing at the next national vote?

"Forget Brexit, we fix potholes" – so or in a similar fashion would campaigners go about the May 2, 2019, local elections' context. It seems as if the governing Conservative Party wishes to distance itself as far as possible from any Brexit chaos it itself orchestrated whilst the major opposition Labour Party argues that early national elections are the only way forward. What both (perhaps soon formerly) dominating political movements may have completely overlooked is that uneasiness is growing day by day amongst exactly those voters they aim at keeping at bay – their hardcore base, their grassroots members.

With a split between former U.K. Independence Party (UKIP) teammates ever more visible, in particular after Nigel Farage formed his own Brexit Party to contest the European Parliament elections, comments made by Gerard Batten, new UKIP chair, are indeed worrisome, as he had labeled Islam a "death cult."

Hence it would be foolish for established mainstream parties to ignore growing voter resentment vis-a-vis how they have handled Brexit. Recent polls including a YouGov poll (https://www.politico.eu/) put Farage's Brexit Party at 27 percent, Labour at 22 percent and the Conservatives at a shockingly low 15 percent.

But extreme ideology seldom goes along with proposing precise alternative policy-making scenarios, most definitely not on the local level, where rolling up one's sleeves counts first and foremost convincing voters of your plans. Think housing, environment, tax cuts, council tax, public transport and so on and so forth, not even to mention the fixing of potholes, which amazingly turned into one of the hottest election campaign items as of late.

Not May 2, rather May 23 and beyond is the danger zone

One thing seems certain, luckily so if observers have the future well-being of British democracy on their mind: May 2 will not see a landslide victory for any extreme political movement no matter whether left or right leaning; with no experience in how to manage local councils bar a few notable exceptions, hence little chances to come out victorious.

The danger, however, is that the European Parliament elections, as useless as it may be, (with Oct. 31 as the current departure date, once Brexit is duly completed, hence all seats must be vacated by then) will be now seen as a national vote against the government. In addition, if recent polls prove correct it will have devastating impacts on potentially both Labour and Conservatives.

Should extreme political thoughts ever come to the majority commanding pole position in the U.K. and even challenge mainstream democratic parties and take over the government, it is only one segment of society, which must blame itself: Exactly that very same mainstream parties' establishment having dramatically failed their voter's concerns. Are we there yet? No, and hopefully never.