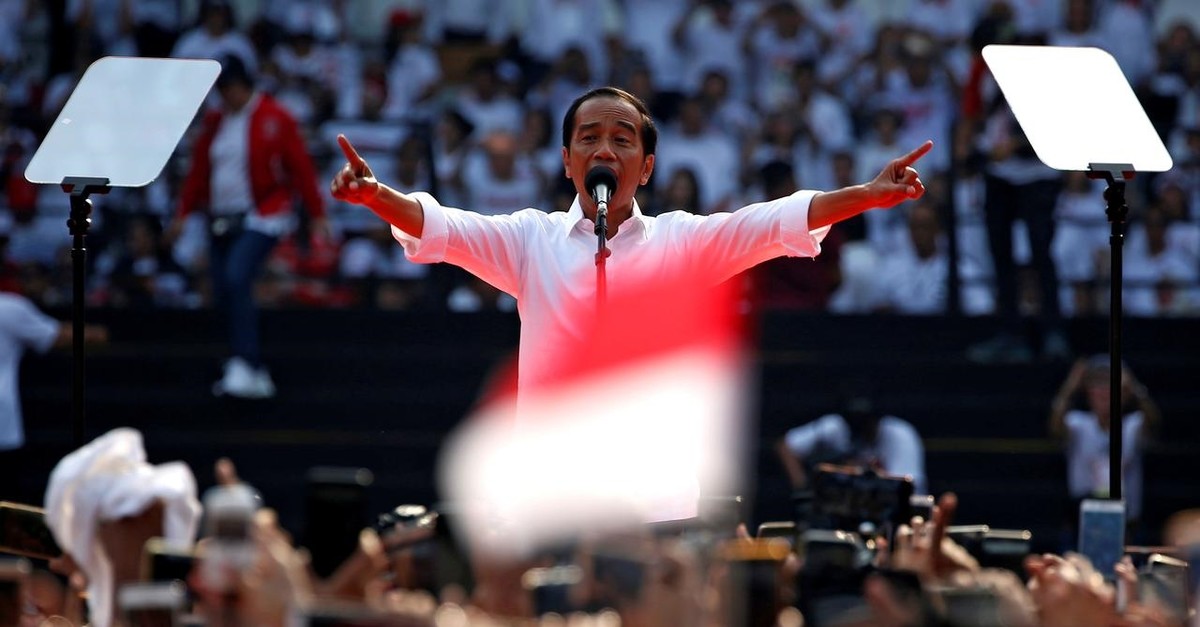 Indonesia's President Joko Widodo during a campaign rally at Gelora Bung Karno Stadium in Jakarta, Indonesia, April 13, 2019.
by Muhammet Ali Güler May 09, 2019 12:08 am

The Indonesian elections have shown that Indonesians are well aware of the economic advantages, while at the same time realizing that economic power does not clash with Islamic values

Over 190 million Indonesians went to the polls on April 17 to vote on the continuation of Joko Widodo's leadership or to let his rival, Prabowo Subianto, run the largest economy in the Association of Southeast Asian Nations (ASEAN) and the world's third-largest democracy. The primary difference between this election and the 2014 election was the increase in the number of eligible voters to around 193 million. In addition, the 2019 election was considered to be special since presidential, parliamentary and regional elections were held on a single day.

Significant surveys were conducted to predict the possible result between the two sides in the presidential election. According to several pro-election surveys from Kompas, Saiful Mujani Research and Consulting, Australian-based Roy Morgan, LSI and Denny JA, President Widodo led with a respectable amount of support; support for Widodo fluctuated between 49 percent and 58 percent, while support for Subianto fluctuated between 29 percent and 43 percent.

On April 17, the presidential candidates were the incumbent President Widodo, once the Governor of Jakarta, and Prabowo Subianto, a general. The first time both Widodo and Subianto contested the presidential election was in 2014. Widodo won that election with over 53 percent of the votes, while Subianto had a little over 46 percent. President Widodo was expected to have difficulties winning in 2019 since there were claims that the gap between the two candidates might continue closing all the way until election day.

However, it seems the gap between Widodo and Subianto in the 2019 election was similar to the result of the 2014 election. Widodo won the 2019 election with 55% of the vote, while Subianto managed to garner only 44 percent. It should be noted, however, that the official results would be announced between April 25 and May 22.

Election campaigns have been contested on major issues based on economic agendas such as reducing unemployment (5.34 percent), one of the highest in ASEAN, creating more jobs, sustaining economic growth (from 5 percent to 7 percent) and the decreasing value of the Rupiah against the U.S. dollar. In addition, education and health care remained controversial issues.

However, two issues took precedence over many others. One such hot-button issue involved Chinese-led projects in Indonesia. It is very likely that the Indonesian-Chinese partnership will improve, a sign that would lead to many projects being brought to Indonesia as Widodo looks for foreign investment, including from China. Widodo is expected to attend the Belt and Road summit in Beijing this year.

However, some circles have criticized Widodo as being pro-Chinese, with another shared concern being the transparency of Chinese loans. In this regard, his rival, Subianto, said he would welcome Chinese investments if it could be mutually beneficial. He pledged to deal with China in a fairer way due to the growing trade deficit before the election. According to the Ministry of Trade, the total trade volume was over $72 billion in 2018. Indonesian exports to China were slightly over $27 billion, while imports from China were $45 billion. The trade gap between the two countries was over $18 billion.

Another issue of concern involved religious accusations against Widodo. In response to the religious criticisms, Widodo chose Ma'ruf Amin, the chairman of the Indonesia Clerics Council in 2016, as his running mate. On the side of the opposition, Prabowo received supported from many religious groups.

According to a study by the Pew Research Center in 2017, over 70 percent of Muslim Indonesians were in favor of designating Sharia as the official law of the country. Nevertheless, it does not mean Muslims are not thinking of economic considerations in daily life. Voting or supporting a party that puts economic projects at the forefront does not mean Muslims have put Islam aside or that Islam clashes with economic discourse. In fact, Muslim societies all over the world place more attention on economic promises, discourses and projects. This is how the results of the 2019 Indonesian presidential election, in the world's most populous Muslim nation, should be interpreted.

The election showed that Indonesians are well aware of the economic advantages, while at the same time, realizing that economic power does not clash with Islamic values. This is mainly due to the assertive promises of Widodo and his alliance with Ma'ruf Amin, an Islamic scholar.

Widodo's economic rhetoric overshadowed that of Subianto in the election. During Widodo's second term, Indonesia will tackle environmental problems through ongoing initiatives that focus on the issue of waste plastic, a project worth over $300 billion to connect its 17,508 islands, transformation of the Indonesian economy into a leading manufacturing hub, creating millions of jobs (100 million), attracting more foreign investments and eliminating poverty. Thus, Indonesia will continue to focus on reforms and projects, ranging from education, bureaucracy to infrastructure and so on.

New voters play a crucial role in any election in any country. Indonesia, as one of the most populous countries in the world, has a remarkable number of young and middle-aged voters. Thus, millennials, those born in the 1980s and 1990s, played a key role in this presidential election. According to the General Elections Commission of Indonesia, the number of eligible millennials was around 40 percent: about 80 million voters. Votes were cast in over 800,000 polling stations, while more than 200,000 candidates competed for over 20,000 national and local legislative seats across Indonesia. It could be said that Widodo's economic agenda and his ability to efficiently respond to demands of millennials, played a vital role in gaining more support in the election.

Furthermore, I have spoken to several Indonesian friends who voted in the single day election with a majority throwing their support behind Widodo over Subianto. A few reasons provided for this support for Widodo include the completion of the first Mass Rapid System (MRT) project in Jakarta, which, according to the 2017 INRIX Global Traffic Scorecard, has the 12th worst traffic in the world, and providing water and electrical support to East Indonesia. In addition, Widodo was held responsible for Indonesia hosting Asia's biggest sporting event in 2018 for the first time: the Asian Games.

Widodo and his vice-presidential candidate, Ma'ruf Amin, were supported by nine parties. On the other hand, both Prabowo, and his vice-presidential candidate Sandiaga Uno were supported by five parties. The parties that supported Widodo are the Crescent Star Party, Indonesian Democratic Party of Struggle, National Awakening Party, Party of the Functional Groups, Nasdem Party, Indonesian Unity Party, United Development Party, Indonesian Solidarity Party, People's Conscience Party and Indonesian Justice and Unity Party. The parties that supported Prabowo and his running mate are the Berkarya Party, Great Indonesia Movement Party, National Mandate Party and Democratic Party and the Prosperous Justice Party.

Indonesia has seen notable improvements in some sectors, such as infrastructure, health, and education under incumbent President Widodo. In addition, he was successful in creating 10 million jobs in his first term. However, more needs to be done in a faster and efficient way to fulfill his promises during his second term. Another indication of improvement under the current president would have to be the shift in Indonesia's position on the World Bank's 2019 Ease of Doing Business Index from 120th in 2014 to 73th in 2019. This improvement occurred in tandem with Indonesia's strategy to attract more foreign investment.

During the election campaigns, candidates prioritized solutions that would encourage political and economic stability, diminish corruption, create more jobs, maintain robust economic growth, diversify various sectors as well as transforming the economy from one that is externally dependent to one that is self-sufficient. These needed changes allow developing countries to narrow the economic and technological gap with developed nations.