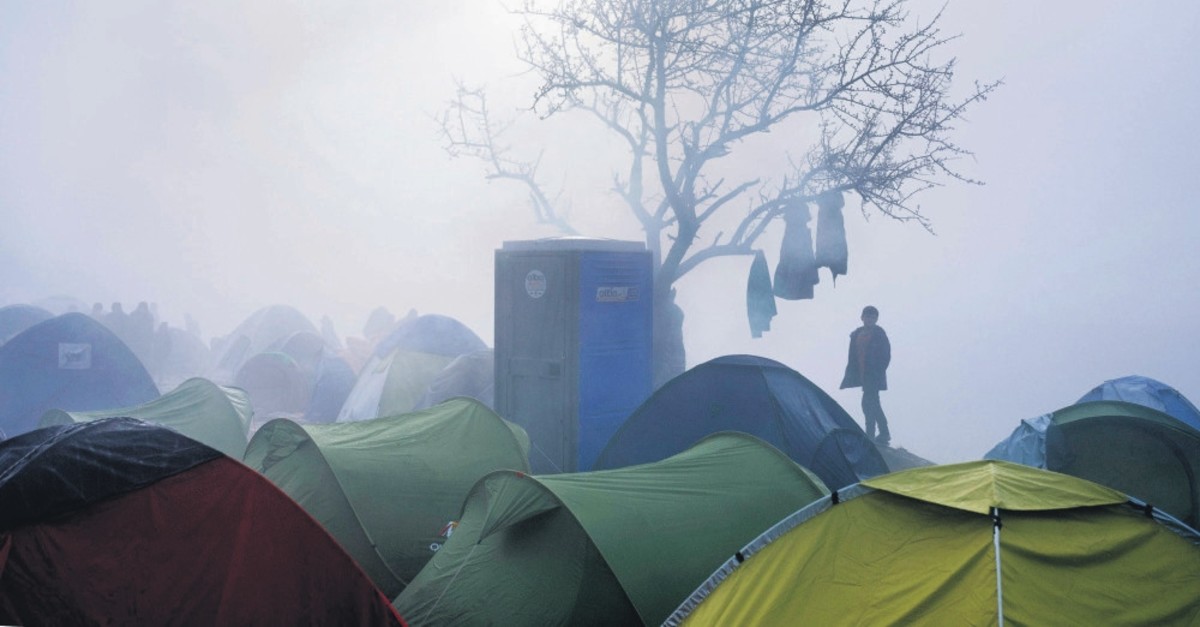 A migrant boy stands among tents during a foggy morning at a makeshift camp at the Greek-Macedonian border near the Greek village of Idomeni on March 8, 2016.
by Tarık Oğuzlu May 17, 2019 12:06 am

The more international and domestic environments intermingle with one another, viz. intermestic, the more challenging it becomes for decision makers to legitimize their foreign policies on moral/ethical grounds. Three alternative conceptualizations of legitimate political communities stand out in this regard: nation-state, international society and world society.

In mainstream realist understanding of international relations, foreign policy is considered to be one of the social domains in which morality plays a minimum role. The prime reason for the paucity of moral considerations in foreign policy is assumed to be the predominant role of states in this realm. States, in contrast to human beings, are artificial creatures that operate on the logic of instrumentality/consequences. The main question decision makers should ask is which particular courses of actions/strategies yield the highest amount of payoff in a world of anarchy. The moral considerations and principles that can be pursued among individuals inside borders should not dictate states' interactions with actors lying outside territorial boundaries.

The realist approach values the nation-state above all other political communities and contends that the legitimacy of nation-states derives from their capability to provide welfare, security, order, justice and prosperity to their subjects. Human beings can acquire such benefits only by becoming subjects of their nation-states. Citizens are expected to direct their duties and responsibilities to their fellow men who live in the same political community. Realism holds that whereas the domestic arena is considered to be the realm of morality where doing good things with altruistic motivations is quite possible, the international arena is the realm of immoral power politics where every actor is for himself/herself and the logic of survival trumps all other logics.

Rulers will first and foremost consider the major needs of their citizens, and they would do whatever it takes to help ensure that their subjects live in good conditions. The likelihood of rulers remaining in power hinges on their ability to fulfill the basic human needs of their subjects. This is to say that rulers would not be constrained by the same moral considerations in their external actions as they uphold at home. The end of providing a secure and good life at home would justify all kinds of means adopted abroad. Rulers would hardly feel any responsibility towards people living outside the borders of their states. This approach to morality is also known as communitarianism, to which the quest for universal morality is a futile exercise and morality can only be defined in relative terms, viz. relativism. A moral and decent life can only be lived within the sacrosanct boundaries of nation-states and the bond of citizenship is the ticket to this. The realist perspective holds that preaching good and pursuing moralistic policies abroad would likely invite further chaos and confrontations.

Rulers would be deemed legitimate actors in their internal affairs, yet their efforts to damage the orderly relations within the international society would be punished. This approach shares with realism the view that nation-states are the best agents that could provide security and other goods to their subjects. However, unlike realism, the international society approach holds that moral considerations are also valid at the international level. Designing foreign policy from this perspective would yield more sensitivity to the sufferings of people who live in other nation-states. Yet, this sensitivity would mainly emanate from the idea that unless people feel themselves safe and secure in their home countries, this might negatively affect the orderly relations among states. Migration is a typical example of such understanding. Why should the developed countries of Europe do something more to help improve the living conditions of people in the Middle East and North Africa (MENA) region?

Finally, according to cosmopolitanism, the prime referent of morality questions should be the individual himself. Human beings are the main subjects of morality both at home and abroad. Cosmopolitanism holds that nation-states, which are considered to be artificial creatures by realists and forming an international society among each other by the international society approach, cannot be dissociated from the human beings themselves.

All human beings are entitled to the same universal rights by birth, which are inalienable by any worldly authority. This universal claim to humanity is the sine qua non for the world society to emerge. From this perspective, the prime responsibility of state leaders is directed not only to their citizen-subjects but also human beings living outside their national boundaries. Forming particular political communities in which people of all kind of differences would be entitled to the same moral standing should be the ultimate foreign policy objective of rulers. If this were not possible, then rulers should take decisive actions with a view to ensuring that people of other countries do also live good lives. The crux of the issue here is that caring for people in other countries should solely emanate from a pure respect for human beings in general, rather than the strategic calculation that turning a blind eye to the sufferings of others might in the medium-to-long term culminate in negative consequences for national interests.

What is the trend?

Foreign policy thinking and behaviors of many actors in recent years suggest that compared to others the realist approach to morality has been on the rise. Eschewing global responsibilities, investing too much in the idea of great power competition, adopting "making America great again" like discourses, focusing on incessant economic development at home and pandering to nationalist feelings to garner legitimacy in the eyes of citizens might not portend well for the emergence of moral foreign policy practices.

Doing something good for others with altruistic motivations is becoming rarer each passing day. Adopting foreign policy choices on their expected material payoffs would likely continue to be the main driving logic of the foreign policy making process in the years to come.

Good/moral foreign policy starts at home. If state leaders don't provide public goods to their citizens, they cannot pursue morally justified foreign policies abroad. Yet, of all, it is cosmopolitanism that holds the greatest possibility of being identified with a moral foreign policy.

In an ideal world, doing good to others in the name of humanity would have much higher moral standing than caring only for the citizen-subjects at home or nation-states themselves.However, one particular current of cosmopolitanism should be avoided in this process, for that might detract from moral/ethical/good foreign policy. Some countries might deem themselves as exceptional and above others. They might believe that their moral values and norms hold the highest position in the ladder of morality, and they are entitled to promote such values abroad, sometimes even at the point of a gun. This thinking proved to be dangerous in the past and will yield no positive results either in the future.

The world is changing at great speed and constructing foreign policy on solid moral grounds is becoming a daunting task in the emerging multipolar environment. Yet, the multiplication of issues and actors, the growing need to build network oriented cross-cutting and overlapping relations and transformation of the world into a much smaller place each passing day seem to make it urgent that we all give priority to morality in foreign policy thinking.

* Professor in the Department of Political Science and International Relations and Director of the Center for Social, Economic and Political Research (SEPAM) at Antalya Bilim University