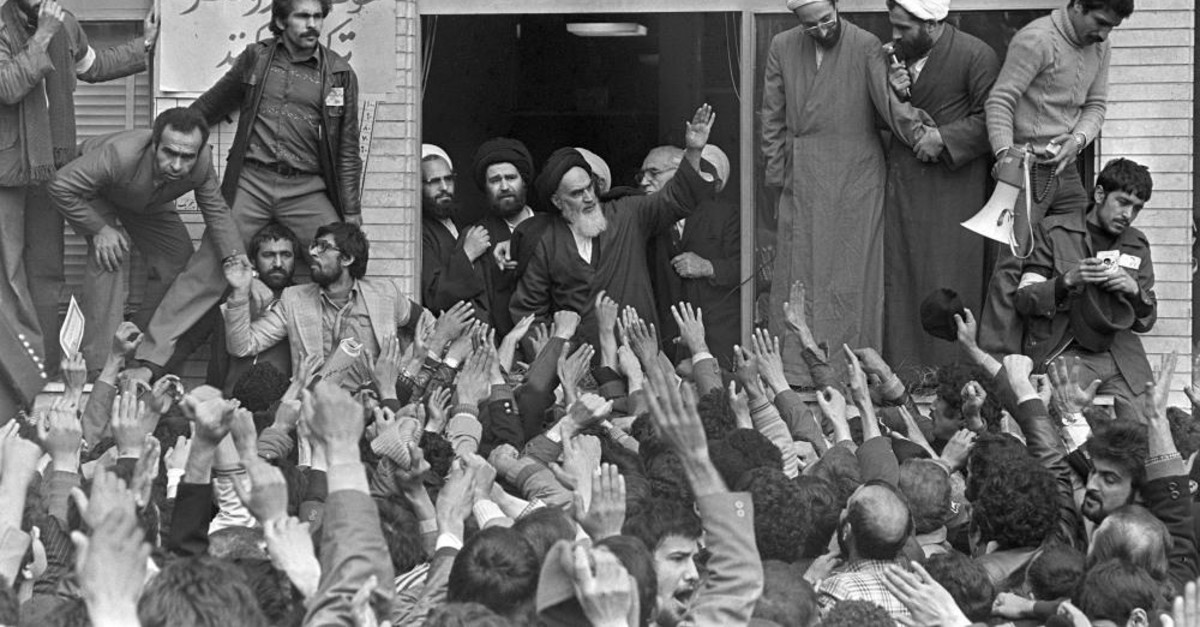 In this Feb. 1, 1979 file photo, Ayatollah Ruhollah Khomeini, center, waves to followers as he appears on the balcony of his headquarters in Tehran, Iran.
by Mojtaba Barghandan May 21, 2019 12:04 am

Nowadays, Iran cannot generate new solution-oriented mechanisms to solve its problems and isn't heading in the right direction. Unless it takes measures based on logical reforms, the future seems ambiguous

In my previous pieces, I discussed people's role as the main force behind any potential socio-economic and political transitions in a country. The impacts of outside pressures, the geopolitical situation, et cetera were also underscored. Iran, for example, is a pure example of this. As I penned on Jan. 2, 2019, the domestic and international challenges that Iran has faced are worth examining in order to reveal the true role of people in a country's political fate. Iran's domestic struggles and the threats raised against it need a deep, critical rewind.

Iran has entered a fresh new year by introducing significant socio-economic initiatives; however, its currency the rial hit a new-low against globally major currencies. Inflation, unemployment, along with many other challenges, are ripping up in Iran and are threatening the ideals of the 1979 Revolution, causing sociocultural disintegration.

According to various historical evidences, outside factors are not the only threats to national sovereignty. There are many domestic factors as well that provide grounds for outside forces to easily manipulate the foundation of the system. Knowing this, the aim is to address some major basic parameters that may better clarify the domestic causes of the ongoing situation while the severity of the outside's pressures on Iran is not underestimated.

During the Middle Ages, the priority was to conserve the established beliefs and forms of government. Any suppressing changes in society were seriously resisted. Religious authority was so strong and its belief in the maintenance of order so fundamental that the church directed people to accept the inequities of power, instead of upsetting the stability of society.

Going back further in history, we observe that the ancient Greeks had a similar belief and attitude toward authority, society and revolution. Similarly, many revolutions, at least in contemporary history like those in the Middle East and North Africa region, have been following similar principles.

The fate of many of these revolutions indicates a constant and ingrained code of beliefs and a religious based revolution like that of the Middle Ages Europe would have difficulties to survive or their survival would ultimately lead the country to a dead end.

Knowing this, evidence signifies that Iran is also trapped by the principles of '"Middle Ages Europe;" the Iran has inflicted a gradual decay in some basic aspects of the revolution besides moral and cultural values dilapidated.

We have learned from history that moral and cultural values are so precious that if they become flimsy, either the system or society will be vulnerable to a revolutionary upheaval or, at least, the road map to development will be ruptured.

The Iran needs an urgent spring-cleaning in its structures in the hope of more compatibility with the wishes of its own people and society as well as with the norms of the international communities. It is because society is the main force behind a potential collapse of a system or its progress. Compatibility with international norms is the route to both the promotion of socio-economic welfare and empowerment of the system or government itself within the international communities.

The fulfillment of the norms upon which the Iranians overall prosperity and comfort are based is one of the most urgent measures the Iran should adopt. To this aim, the system needs to be more pragmatic both in its domestic and international affairs.

When Iran was established, the revolutionaries specified that they want to make it exemplary, based on the principles of an inclusive revolution. The other themes were such as the establishment of justice at home and in the world and the idea of independence, and fight with the oppressors.

They still insist on being exemplary and have even transcended some areas that the West sees as regional and international red lines. Thus, it has been provocative and controversial and is still instrumentally misused by the West and is causing a constant headache for the Iran.

Iran's position in international relations and global politics reminds me of the fact that acting according to the prevailing global realities does not always mean surrendering or yielding to imperialism whatsoever. Rather, insisting on utopian ideals will endanger the system in the long run.

In fact, acting according to the prevailing global realities might mean as entering into a policy-setting process resting on the country's existing capacity and strength. A country which sets its policies according to the necessities and urgencies of the particular time and place is usually more pragmatic and ambitious while at the same time following soft diplomacy.

Turning a blind eye to the realities of the international system is often interpreted as the lack of understanding of power equations and sending a threatening signal to the surroundings, the repercussion of which can be sometimes immeasurable and unpredictable, such as national humiliation and security threats.

In other words, in the political game, one may eat a mouthful, but should not make big promises. Global politics is a platform for a possible power and action game. So to speak, a regime or a system should both avoid talking thoughtlessly and hastily and unsettling the balance of power.

For instance, the Joint Comprehensive Plan of Action (JCPOA) aimed to be based on a win-win policy. However, this agreement may not necessarily mean for every leader a "fifty-fifty" agreement, since that agreement may not be compatible with one side's policies in a particular period or condition.

The different approach adopted by the Trump administration compared with its predecessor and adoption of d​ouble standard policies by major European countries is proof of this argument.

This is a functional strategy for revolutions that are perceived (with bias) as potential threat to the international system and have always been under scrutiny. Such a revolution should not deduce a win-win approach as an absolute "fifty-fifty" based agreement. Rather, it should and has to, perhaps, conclude it based on the prevailing capacity in order to win necessary time to make money off the situation.

There is no doubt that U.S. policies endangered and devastated the norms of global governance and international cooperation but this is the reality of the major international actors' policies, and others, consequently, should adopt a sort of repulsive tactic.

In the revolutionary discourse, Islam and revolution define the independent identity of Iran, and thus, Islamic principles should always be the only reference to cite.

That is, the country is rebuilt by religious ideals through which various sections of society are held together.

Thus, as expected according to evidence from the history, religion has been widely at the service of politics. As a result, a sort of sociopolitical divergence emerged. Consequently, religion and politics were damaged. It not only caused the loosening of the public beliefs but tore up the very fabric of society. Society's means of defense is not always weapons. Rather, a strong sociopolitical fabric would help the country and society get rid of all kinds of soft or hard mal-intent.

Adding more flaws to its adequacies, the system felt the need to refer to the reforms and reformist principles with conditions that the reform process should be in full compliance with Islamic principles. That is, all various stages of reforms should be based upon the values of the Islamic system. Introducing a new inclusive stimulus discourse and creating a consolidate discourse capable of overcoming some induced currents in domestic politics which is called by revolutionaries as "fake polarization," has been the main goal.

The removal or putting under house arrest some politicians with significant impacts on the system's decision-making process since the first days of the 1979 Revolution is based on this understanding, which has made the system much more vulnerable just as it has intensified fake polarization. In a general point of view, reform and fundamentalism are not compatible. The combination of these two streams of thought has not been functional, at least in the case of Iran, since both the reformists and the fundamentalists have used their intellectual and ideological principles as inputs in the foreign policy decision-making process.

This approach has deeply damaged the practicality of Iran's domestic and foreign policies as well as important decisions regarding social-economic welfare policies, since the output from these political wings as a form of executive policies have not only not conformed to the general policies of the system, but also do not match the standards and norms of global politics and international communities. As a result, a climate of political and social bewilderment emerged that has baffled the system in some areas. Thus, a reformist fundamentalism is by no means appropriate for Iran.

The efforts of the members of the new revolutionary front to gradually modify the contents of the new domestic reform package has distracted them to practice the ideals of the Islamic Revolution, so they are called a fake wing of revolution that created harmful polarization.

Their efforts have brought forth some changes. The system indispensably takes no stances to upset the ongoing big sociocultural change or deformation, as the fundamentalists call it.

However, decisions in foreign affairs are still made based on revolutionary ideals while the capacities are ignored. Acting according to the realities of the international system makes the country's position in the chain of power equation more stable.

Similarly, as the result of some treacherous policies, the system has become much lesser compatible with society, which has made both the system and society more vulnerable to domestic and international threats.

The ongoing climate of political and socio-economic bewilderment has baffled both the system and the loyalists to the revolution. Formulating a comprehensive socio-economic road map based on the existing capacities and resources is the best practice that would empower the system.

The system also should mull over the role and impact of religion on political decisions in order to prevent the death of religion; if religion is destroyed, as this is a long-term focus of the malicious adversaries, the foundation of the revolution would become shaky, since the Iran was established by a religiously inspired revolution and is governed by Islamic Constitutional Law. The similarity of Iran's basic principles with that of the Middle Ages is terrifying. Despite comprehensive progress in various fields and significant achievements, Iran - for the reasons defined here is not heading in the right direction. Of course, this does not undermine the country's unalienable rights to ambitious progress for defensive policies.