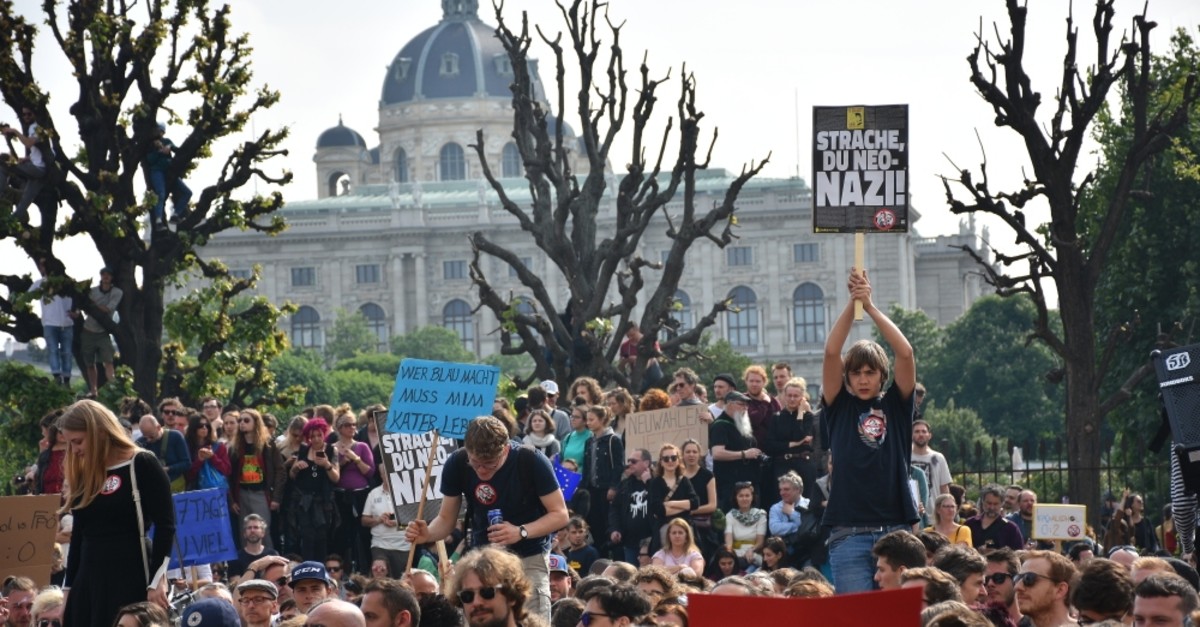 Demonstrators protest the controversial leaked footage of Heinz-Christian Strache, a leading politician of Austria's far-right Freedom Party (FPu00d6) and call for snap elections, in the capital Vienna, May 18, 2019.
by Jurgens Klaus May 22, 2019 12:10 am

A dramatic chain of events has culminated in Austrian Chancellor Sebastian Kurz announcing that his country would head to the polls early should President Alexander Van der Bellen accept his request. A short while later Van der Bellen spoke to the electorate confirming that he has granted a snap election. Labeling both short speeches emotional would be an understatement – clearly something extraordinarily grave led both leaders to choose the unusually straightforward words they did.

At stake is sensational video footage leaked to local and German media shot in 2017 allegedly showing Heinz-Christian Strache and Johann Gudenus – at that time two leading politicians of the far-right Freedom Party (FPÖ) – in supposedly secret talks with a wealthy woman of Russian origins, a family member of a Russian oligarch. By now, we know that that foreign person was a fake and the whole conversation a setup.

Yet, Strache confirmed the meeting had taken place and much more worrisome, the dialogue, secretly taped, had indeed happened as presented. He immediately decided to resign as vice chancellor and party chairman and apologized first and foremost to his wife. He admitted it was an alcohol-fueled night and referred to its contents as catastrophic. However, he insists nothing criminal took place in a holiday home in Ibiza.

The first clip put online of the all-in-all apparently six-hour get together in Spain focused on Strache and Gudenus suggesting and then agreeing that the foreign woman would be offered lucrative public contracts in return for helping the FPÖ win big time in the upcoming elections, which at the time of the video were to be held in the near future. Precise names of publicly tendering enterprises were mentioned, which in the future would not get a single euro.

Also mentioned were business leaders, who supposedly donated cash to the FPÖ – many of which already refuted those claims yesterday. Both were subjects of the talks, as well probably meant to make the FPÖ more attractive to foreign investors.

Strache's plot was based on the fake Russia-linked woman taking control of one of Austria's most influential newspapers, Kronen Zeitung. In other words, she would buy it or at least take over majority control. The FPÖ politician is then heard suggesting that three to four leading journalists need to be sacked at that publication to turn it into an FPÖ-friendly public relations machine.

What shocked ordinary citizens here in Vienna and everywhere else in the country the most are two issues. First, how could representatives of a supposedly "clean" political movement intending on showing the established peoples' parties the red card and win at the ballot box employ vocabulary so utterly unsuitable for elected office holders, or even candidates for that matter?

Linked to that is another question. Although there is a certain albeit ideally negligible acceptable difference in how to behave in public and what might be said in private, one must acknowledge that the tone, language and gestures used by both Strache and Gudenus provided insights into both men's personalities in general, meaning neither of them were truly suitable for high political offices in the first place. So, the public is now wondering whether perhaps other such "discreet" events took place once Strache was elected vice chancellor, as well. Could other deals of this nature perhaps have been made with real people?

Second, and onto the agenda discussed in Ibiza, Strache basically declared Austria a Banana Republic in which a politician can sell out his country to a foreign investor in return for getting the job he dreams of. It demonstrates the disrespect Strache – and to a lesser extent Gudenus, though he is not the man in the spotlight at the moment – has for Austria and his fellow citizens. It also blatantly disregards the Austrian Constitution. And to top it all off, Strache does not seem at all worried about the security risks involved in allowing Russian interests to run a leading Austrian newspaper.

Strache vows legal action, public asks 'Who did it'?

Innocent until proven guilty; yet, as Strache admitted himself, the evidence in the video is damning, meaning that universally promoted assumption no longer applies. He now wants to take legal action against those who set the trap for him and his party colleague. Whether he will succeed, only time will tell, but that is no longer the major focus of the current debate.

There is, however, an intertwined issue that must be properly scrutinized and has turned into a hot topic in the capital late last night. The question is this: Who did it?

Those with knowledge about video cameras, information technology and other details linked to such events agree that it is top quality work and that the whole affair must have been organized by very well-trained – albeit technically speaking illegal – operators. The meeting as such must have been preplanned, otherwise no cameras would have been on location. Hence, it was a prefabricated trap, not a chance encounter involving too much alcohol in a sunny spot, which was Strache's first take on it once the story broke.

Conspiracy theories are a plenty and will for sure be part of public discourse for months to come. But this is nothing more than just the other side of the same coin minted in the denomination of disrespect. Regardless of if a foreign power or a domestic organization or anyone in between is responsible for the setup, Strache is at fault because he should have never ever spoken and acted in the manner he did. He simply cannot transfer the blame for his unseemly behavior onto those who taped him.

"Enough is enough," said Chancellor Kurz when calling off the so-called Turquoise Coalition between his Conservatives and the FPÖ shortly after 5:45 p.m. yesterday. He admitted it was not an easy decision but that there was now no alternative left. He then said he didn't think changing figures would change the mentality of the FPÖ's leaders and that offering the Socialists the chance to come onboard halfway through a term was impossible due to differences in policies. Finally, none of the smaller parties could secure a majority government due to a lack of numbers.

Thus, falling on the chancellor's shoulders, he declared snap polls should the president agree.

They could be held as early as June or not before September. The fact is, there is another vote coming Austria's way before that – the European Parliament elections held all over Europe between May 23 and May 26, and there are three distinctly differing scenarios.

First, Kurz's conservative party, the New People's Party, could win and benefit from disgruntled FPÖ voters, thus stemming the tide of a rise in far-right shares of the public vote currently witnessed almost everywhere across the European Union.

Second, solidarity may become a buzzword among FPÖ aficionados and thus leading to stabilizing their share of the vote.

Last but not least, all other parties including socialists, greens and liberals might come out on top. They may believe that whatever the FPÖ does is wrong at this point and whatever Kurz's Conservatives are up to is perfect for them.

Politically speaking, it is going to be a very hot early summer here in Austria, and the final days before the European vote will for sure be very interesting. And one other thing is certain, too: Sebastian Kurz has demonstrated statesmanship by taking over complete leadership and responsibility, fit for a chancellor. One may say the exact opposite about far-right amateur politicians, who confuse running a democracy with a toy shop.