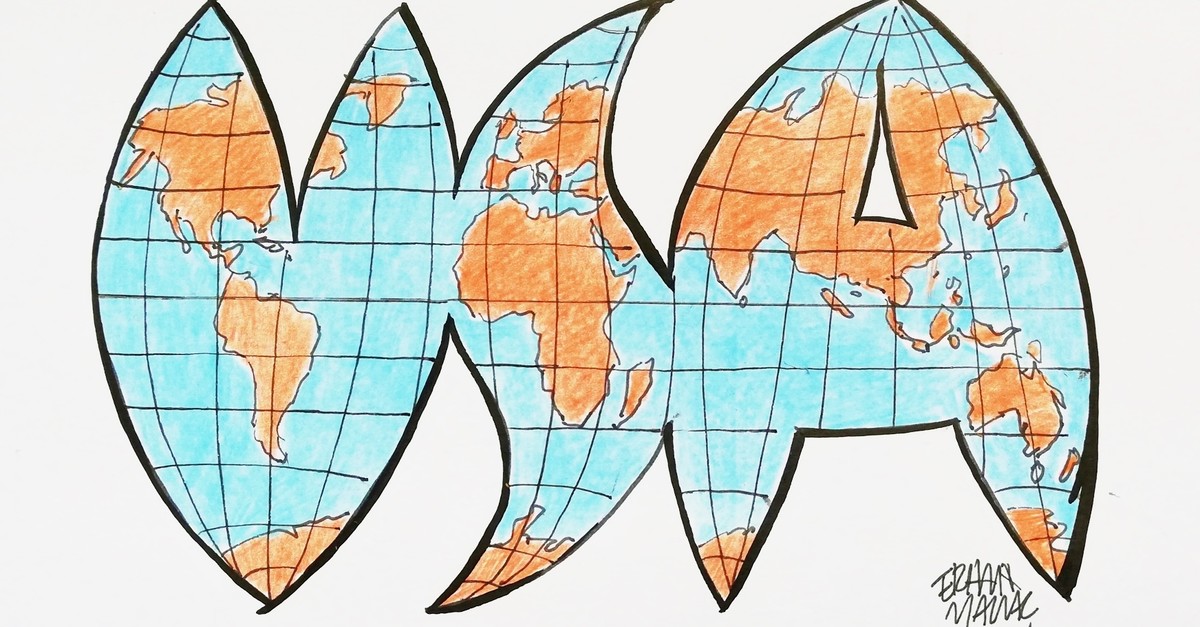 With the impending changes in the multipolar system in world politics, Turkey and Malaysia are demonstrating the first examples of the consequences of maneuvering between superpowers

The last ideological, political and military confrontation was between the United States and the Soviet Union during the Cold War years, ending with the dissolution of the Soviet Union in 1991. Since then, the U.S. has been the sole remaining superpower with international politics transformed from a bipolar to a multipolar system in the last few decades.

There have been several reasons for American dominance in the world. First, since the collapse of the Soviet Union, there has been no superpower with equal political, economic and military footing to the U.S.

America has showed itself an advocate of values such as democracy, freedom and human rights, which are to spread American dominance everywhere. There are nations that see America needing to share or impose these values globally.

There are no other powers that dare to begin a face-to-face standoff against the U.S. in any way, at least until the past couple of years.

However, the last few decades have seen the U.S. losing these privileges since Russia has mostly recovered from the collapsed heap of what was once the Soviet Union. In addition, China has evolved out of the ruins of internal strife.

The U.S. has been called a "bullying hegemonic power" by many countries due to its unwelcome "America first" policies. Moreover, American influence and power in international structures such as the United Nations, the World Bank and so on are seen as interference. International organizations have long been used as strong American policy instruments toward other countries so as to spread its influence and power. As an example, there are many countries such as Russia, China, Turkey, Iran, North Korea and Venezuela that have faced political, economic and military sanctions.

What about the Chinese position?

There have been many questions about China's future role in global politics. The West is aware of Chinese influence across the globe through the Chinese economic agendas. It is even claimed that there are hidden agendas in China's economic expansion, such as the Chinese debt trap policy. For China to continue its expansion, the growth of China's economic power plays a crucial role from Asia to Africa and to Europe.

China has initiated its own style of international organizations such as the Asian Infrastructure Investment Bank. Billions in Chinese economic assistance, grants and loans have spread to countries such as Cambodia, Sri Lanka and Sudan.

Therefore, middle or smaller countries have been trying to find other ways to break American and Chinese domination through other possible strategies such as alignment with opposing, or emerging powers. In this regard, the U.S., Russia, China and Japan have been alternative poles against each other's dominance, while Turkey, Saudi Arabia and Iran have been regional alternate countries in the Middle East.

There have been times when the policies of the U.S. and China sometimes have bothered some regional and international nations. The Americans have had brushes against its allies such as Turkey and some nations in the European Union. In addition, the Chinese have had problematic issues with some countries such as Malaysia. These troubling policies have been increased during the Trump presidency (the attitudes of Trump) in Washington and Xi Jinping (the assertive policies of Xi) in Beijing.

Is it possible to break the hegemonic/bullying behaviors of big powers by creating new alliances?

I would like to explain Turkey's situation against the U.S., and Malaysia's case against China. Both Turkey and Malaysia are developing countries and have political and economic vulnerabilities. However, the way that Turkey and Malaysia have allied against or toward bigger powers may be a domino effect over the world in dealing with hegemonic or bullying or bigger countries but at a heavy price.

Through the use of diplomatic channels, Turkey has relayed its concerns to the United States in regard to its policies on a couple of issues, including the Gülenist Terror Group (FETÖ) and the terrorist PKK and its Syrian wings, the People's Protection Units (YPG) and the Democratic Union Party (PYD), and the Syrian crisis. These issues are relevant to Turkish national security. Turkey has the right to ask any means of assistance from its allies, including the U.S.

Unfortunately, the stance of the U.S. in regard to Turkish security issues has frustrated Turkey, so Turkey

Additionally, President Trump continued his intimidating discourse against Turkey in several incidents, such as the incident involving the American pastor Brunson, and the conflict regarding the PKK/YPG/PYD. President Trump tweeted "Will devastate Turkey economically if they hit Kurds."

In response to Trump's tweet, the Turkish Presidential Communications Director Fahrettin Altun tweeted: "Turkey is not the enemy of Kurds but their protector. Turkey does not have any issue with the Kurds. Our only issue is the PKK terror group and its extensions in Syria. The PYD and YPG are terror organizations."

In addition, Turkish Presidential Spokesman İbrahim Kalın emphasized the same remarks. Unfortunately, the Trump administration does not want to understand that Turkey's fight is not with the Kurds, but against the terrorist foundations threatening its security along the Syrian border. The U.S. shows the world that it fights against global terrorism, while at the same time, ignoring Turkey's worries about PKK affiliated terrorist groups that are attacking a NATO ally, Turkey.

However, these brushes with the U.S. cost Turkey a heavy economic price due to the Trump administration's unfair and open economic operations against the Turkish economy. For example, the dollar had briefly climbed to over TL 7 a few months ago, while there was a 60% loss in the Turkish Lira's value against the dollar in 2018.

However, the relationship with China has been placed under review by the new government in Putrajaya, Pakatan Harapan, which came to power in 2018. The current Malaysian government has shown discomfort with several Chinese projects, such as the $20 billion cost of the East Coast Rail Link (ECRL), and the natural gas pipeline in Sabah due to their excessive cost to the Malaysian economy.

Negotiations lasted for months despite China reducing its cost for the ERCL due to Malaysian discomfort. In the end, Malaysia and China agreed that the project would cost RM 44 billion, down RM 21 billion from the initial figure of RM 65.

However, these suspensions or cancellations of various Chinese projects by Malaysia resulted in negative effects toward the tourism sector, which saw a slump of 35% in Chinese travelers during their weeklong National Day break in 2018.

Furthermore, Mahathir, the prime minister of Malaysia, warned against a new version of colonialism through economic means. During his visit to China in 2018, he said, "You don't want a situation where there's a new version of colonialism happening because poor countries are unable to compete with rich countries in terms of just open, free trade." These kinds of remarks by Mahathir sparked controversy, and some circles called him anti-Chinese. However, he denied those allegations in subsequent remarks.

Consequently, Malaysia felt the need for an alternative country for its national interests. Hence, Malaysia, under the leadership of Mahathir, has directed efforts toward Japan in a political and economic sense as a new alternative to China. In reducing the cost of the ERCL by over 30%, it seems Malaysia has collected the fruits of this maneuvering policy in dealing with China. Additionally, following the "mutual beneficial deal" on the ECRL, it is expected that the number of Chinese tourists coming to Malaysia would be 3.5 million and 5 million in 2019 and 2020, respectively; a rise from 3 million in 2018. Relations between the two look on track after all. Moreover, Mahathir was one of the speakers at the Belt and Road Initiative (BRI) forum this year.