The cost of trusting India to achieve peace 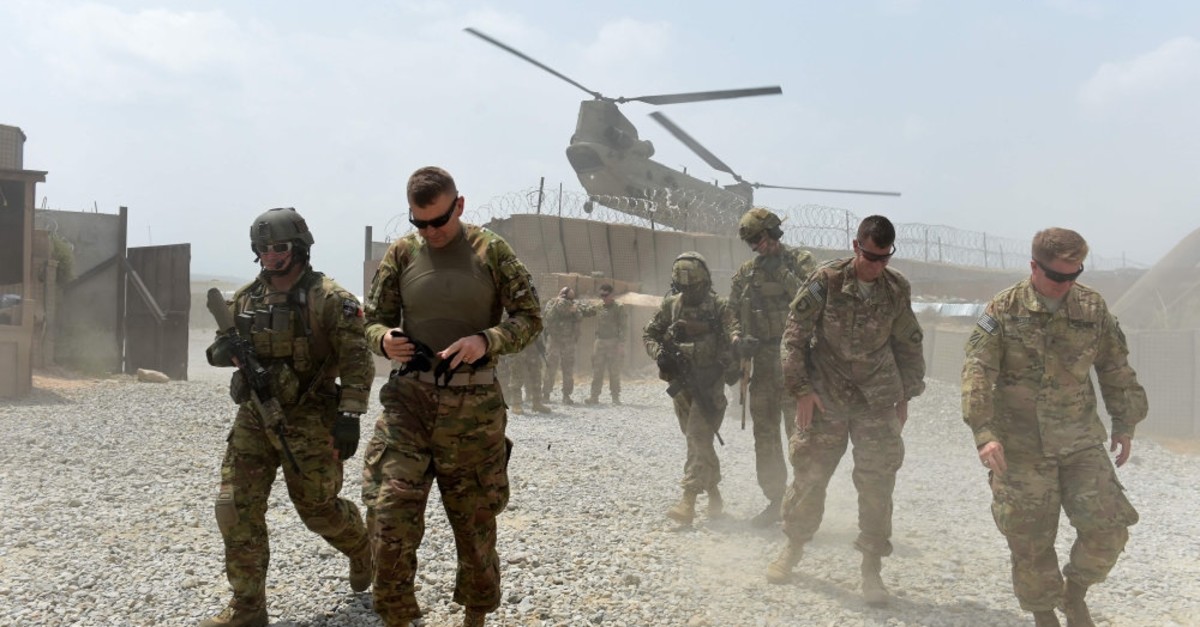 U.S. soldiers walk as a NATO helicopter flies overhead at coalition force Forward Operating Base (FOB) Connelly in the Khogyani district in the eastern province of Nangarhar, Afghanistan, Aug. 12, 2015.
by Irfan Ashraf Jun 11, 2019 12:01 am

U.S. Special Representative for Afghanistan Reconciliation Zalmay Khalilzad announced their acknowledgment and gratitude for the role Pakistan played in the stability of Afghanistan during his visits to Pakistani officials on April 6, 2019. The reconciliation process initiated by the U.S. is a move in the right direction, yet a slight diversion from the actual path will stop it from achieving the intended goal. And unlike Russia's intentions, the goal is definitely not to leave Afghanistan in a state of civil war. The U.S. also does not intend to spearhead chaos in the region by letting India enjoy freedom in Afghanistan nor will it allow the tension to affect Pakistan in any way.

The last half of May has seen names like Abdul Ghani Baradar, a cofounder of and representative for the Taliban, emerging in Afghan peace talks held in Moscow, demanding the full withdrawal of U.S. troops. But we should ask whether there is any foreign presence other than the U.S. in Afghanistan hindering the peace process, how it all began, where it is all leading and where should it all lead to. These are all complicated questions, yet not impossible to answer.

Sixteen years and counting, the U.S.-led war in Afghanistan enflamed all the stakeholders involved in it. Pakistan, who has been blamed time and again for housing the militants, has borne the burden of this war the most after Afghanistan, losing 65,000 precious lives, while Afghanistan lost 147,000. The death toll given by the WATSON Institute report of November 2018 points out the collateral loss that, in turn, turns each precious life into a mere number. What it doesn't point out to is possible gaps in the Afghan war and any possible stakeholders whose presence in the region create more chaos than peace. South Asia's two major rivals, India and Pakistan, and their roles in the Afghan peace process shape the unrest in the region.

The TTP carried out multiple terrorist attacks in Pakistan, even in the capital city, terrorizing the entire country. This rage engulfed Pakistan, who was later torn apart when it had to bear more than 100 coffins of students on Dec. 16, 2014. The Easter attacks in Sri Lanka and the training of terrorists in India as pointed out by a Sri Lankan Army chief remain matters of concern for Pakistan, who fears the presence of the same mastermind in Afghanistan. The May 2019 attack on the Sufi Shrine Data Darbar in Lahore, the culprit of which has been traced by the Pakistan law agencies as one of the three major terrorist networks of the outlawed TTP, is just a glimpse of how the Indian presence in the Afghan war can make things worse.

The creation of Daesh to fight the Taliban and the provision of supplies to it through Afghan air space is, according to Ashraf Ghani, the Afghan president himself, a matter of huge concern. Rather than monitoring and disciplining Pakistan's enemy, the American president urged India to help restore the physical infrastructure of war-torn Afghanistan. It should also be noted that India's refusal to send troops for peace keeping processes indicates the unreliability of the alliance with India for the U.S.

In fact, with its consulates in Kabul, India had easier access to Pakistani soil. India's $3 billion aid to Afghanistan, security assistance in the form of training and supplying utilities and helicopters is worrisome for Pakistan, while the TTP entering the regional turbulence later intensifies the situation. Additionally, Pakistan faced an invasion of infinite Indian spies like Kulbhushan Jadhav, who used Afghan soil to infiltrate and destabilize Pakistan. In response, Pakistan carried out three military operations to wipe out the militants created in the post 9/11 scenario.

Fatal mistake that prolonged the war

Lethal consequences of the erroneous decision of the U.S. to allow India into Afghanistan spoiled all peace efforts. Although Baitullah Mehsud, the then-TTP leader, was killed by American drones and the war on terror made use of all possible options, allying with India made all the efforts futile and cost the U.S. a lot. It created further maneuverability for terrorists like Aslam Baloch, one of the leaders of the Baloch Liberation Army (BLA), and plunged the region further into chaos. He had been involved in almost two dozen cases that intensified destabilization in Pakistan. He was later killed in Afghanistan, but it did not stop the erroneous consequences of letting India into the Afghan war. Another mastermind of the Baloch separatists, Brahamdagh Bugti, who planned terrorist attacks against Pakistan with the covert help of Afghan and Indian forces, was given haven in Kabul, an allegation by the then-Pakistani leader Pervez Musharraf and which President Ashraf Ghani later secretly succumbed to. Bugti was provided safe escape to Switzerland in 2010.

The U.S. mistakenly allowed India into Afghanistan as its strategic partner, who used Afghan soil, officially and unofficially, to undermine its decade-old enemy, Pakistan. The fence project at the Pakistani-Afghan border, which is projected to be completed in 2019, speaks to the threat Pakistan faces across the border. The attack of 50 to 60 TTP militants on May 1, 2019 on Pakistan's army personnel who were working on fencing in Alwara, North Waziristan is an example of how difficult and necessary this process has been.

Evidence has brought to light the support of militants from India for the BLA, the TTP and other terrorist organizations. Indian army aviation has been flying choppers over every nook and cranny of Afghanistan. Ignoring it all, Pakistan has mediated dialogue between Afghanistan and the U.S., but the lack of sincere stakeholders in the process resulted in catching the mistrust of Afghan Taliban who considered Pakistan a partner in crime. Gradually, it became easier for the enemies to attack Pakistan using its closest neighbor, Afghanistan.

Change of actors for stable peace

Unlike India, who has unfriendly relations with the countries across the border, namely the Afghanis and the Taliban, the U.S. should involve Turkey to rebuild Afghanistan because it is acceptable to all the stakeholders, even for the Taliban. Turkey, as a neutral and acceptable party to all, could not only be a peaceful stakeholder for the rehabilitation of Afghanistan but also its forces can help retain the peace-keeping mission. Turkey is a member of NATO, which gives it a further edge in this regard.

Moreover, the U.S. will have to give credence and consideration to what the Taliban has to say in order to achieve a long-lasting peace. In this regard, the famous release of the Taliban Five by the U.S. on June 1, 2014 along with others to date points to the untiring efforts of the U.S. to help sustain the peace. Even the smallest diversion from the right path could spoil the efforts. Recently, the sixth round of peace talks between U.S. negotiators and Taliban members ended in the Qatari capital, Doha. However, the outcome of this process is highly dependent on the right decisions by the U.S. side.

Analyst on international relations based in Islamabad, Pakistan.
RELATED TOPICS