Trump in London: Is Britain simply a small America? 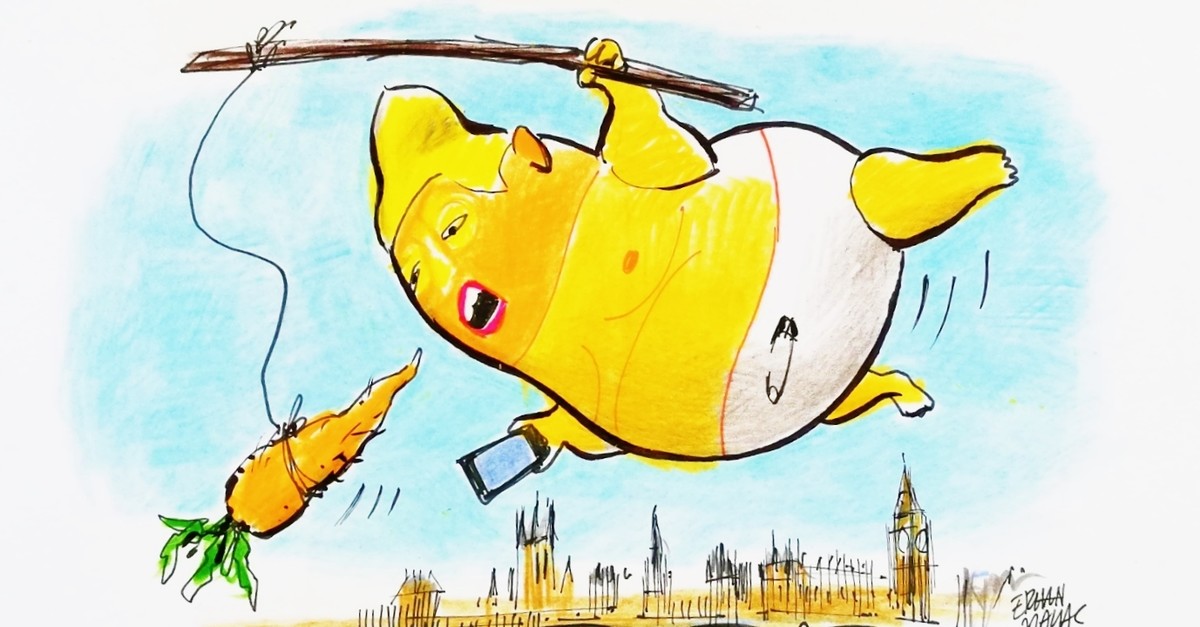 Trump's visit to London and the mayor's reaction has revived discussions about whether the U.K. is simply a smaller version of America and whether Trump's remarks on Brexit hold any particular significance

"I don't drink coffee, I take tea my dear" are the famous opening lines of a song by pop artist Sting first released in the year 1988. "Englishman in New York" was a tune with indirect criticism expressed via America's gun culture; yet, it was perceived as a certain form of declaration of admiration, a certain way of saying British and Americans disagree and are yet in harmony, a certain type of fashion statement in a sense basically, we are one. We shall come back to this latter point and whether it was ever true, and if it is still applicable in the 21st century at all.

U.S. President Donald Trump's state visit to Britain on June 3-4 was unfolding as this analysis was being penned and is a perfect occasion for a reflection about Britain's perhaps misperceived role as a small America or whether this was and is nothing but a cheap cliché.

Besides the topics making headlines, including Huawei, trade and climate change, one might be tempted to look underneath the bilateral carpet so to speak.

The journey had begun before it actually kicked off. London Mayor Sadiq Khan's labeling of President Trump as a global threat was swiftly rebuked by Trump calling Khan a "stone cold loser" before even touching down at Stansted Airport on Monday. Khan continued by saying this is childish behavior. What had led to this exchange was mostly done via social media. The refusal by Khan to attend a red carpet state banquet held on Monday night hosted by the queen – with 150 official guests – was not a small affair by all accounts.

What seems to be clear is that Khan is positioning himself as the defender of all things anti-Trump, riding on the waves of some public dissatisfaction as seen in many parts of the world and most certainly here in the U.K. as well. There will be an election coming up in London and the mayoral race may be wide open. Not necessarily replacing a Labour frontrunner with a Conservative winner but what about an independent or the newly found Brexit Party, which had a landslide victory on May 23. One must only recall the disastrous results in the most recent European Parliament elections to understand the quite justified panic attacks among both Labour and Conservative party candidates.

Fair enough. But considering a London mayor is supposed to represent all Londoners and not just one political movement, and if a survey would be carried out one could assume that only a minority opposes Trump heading to town. That said, an elected mayor should bite his or her tongue and act as what she or he is voted in for: the representative of London as a city open to the world and not by pulling up mental draw bridges by refusing to attend a dinner hosted by the queen to welcome a foreign head of state.

And London's role in a post-Brexit world brings me to our next issue.

Never shying away from straightforward comments, President Trump spoke about Brexit and how he would deal with such a situation. CNN London quoted Trump as saying he would not pay a $50 billion divorce bill, and the BBC cited him as suggesting the U.K. should walk away if the EU does not give Britain what it wants.

At times of complete chaos in Britain about how Brexit could or should finally materialize and a few days after Prime Minister Theresa May's decision to resign as party chairperson by June 7 and subsequently as prime minister once her party chooses her successor; Trump may actually find open ears and minds about the subject.

With sensationally high gains at European Parliament ballot boxes for Brexit party chairperson Nigel Farage – probably best characterized in the public mind between two sides, those who adore or those who abhor him – mainstream parties might just want to listen to Trump and take some of his outspoken words to heart. Even more so May's successor – either a strong defender of a hard Brexit if all goes awry until Oct. 31 or a softer candidate willing to ignore former red lines and hammer out a deal most would say is in favor of the EU instead of Britain and Northern Ireland in particular – could employ some of Trump's strongman negotiating strategies and advice. A free trade agreement is of course a priority for London after Oct. 31 as are other issues that have led to some sort of confusion between both countries, notably climate change and for example, Huawei mobile phone technology.

Is the U.K. really nothing but a small America?

Talking about clichés, one all-time favorite was the assumption that Britain is basically an American outpost, somehow accidentally separated from the U.S. mainland and left isolated someplace in the eastern waters of the north Atlantic. Granted, after World War II both nations enjoyed ever closer relations and friendships and quite understandably so as after all it was America's intervention that turned the war around to rid the world of the evils of Nazi dictatorship. But there was something else – or said rather more correctly not simply one but many further emerging issues that led people in both countries and many international observers to come to the conclusion that the United Kingdom and the United States were nothing but two sides of the same coin, two chairs at the one and same table. Yet, was this ever really true? First, let us start with language. For sure, when citizens of two nations speak the same language everything is much easier as communication works out perfectly well and nothing is lost in translation, so to speak. Perfect examples can be seen in business, politics or tourism and perhaps most importantly, literature. If children are able to fully understand "foreign" writers because the language employed is identical, one day soon they will understand how that "foreign" nation's authors see the wider world, too – with differences for sure but common ground as well.

Second, an often overlooked phenomenon is pop culture. Both nations' younger generations embarked on a never-ending love affair with listening to dance, disco and other forms of pop and rock. It makes one feel automatically more at home should the radio in the airport restaurant at either end play identical tunes. There are variations, and the U.S. market was always considered tougher for foreign music imports, but it is fair to say that chart toppers from either the U.K. or U.S. would be recognized and making the airwaves regularly in both countries. We know we are "there" and not "here" but nevertheless. Third, there is a certain principal way of going about daily chores and leisure. Both nations use modern shopping malls not just as a place to buy goods, but to spend fun family time out, too. Both countries like it big – think sports stadiums, cinemas and themed restaurants.

These three points are the tip of an iceberg and chosen to make a point not for topical completeness. But due to apparently similar interests, declaring both independent countries as an entity per default only separated by an ocean would ridicule the people of both nations. The word "independent" must be looked at more closely. Those close relations and mutual friendship – current political debates about U.S. foreign policies aside for a moment – are based on the free will of the citizens and not on cleverly manipulated public relations campaigns. It is based on and in history and not a trendy new social media invention. And as was expressed by some members of the public during Donald Trump's state visit this week – including vociferous criticism toward a number of Trump administrations' current policies – we end this opinion piece by mentioning another verse of Sting's song. Further down the lines he sings "takes more than combat gear to make a man… takes more than a license for a gun."

Hence, Britain was never a "smaller America." To the contrary, it was probably the one and only European country ever taken fully seriously by America and its leaders – seriously as in independent, seriously as in trustworthy – an ally and global confidante sharing many similar values and attitudes.

But friends must be able to share justified criticism, too. History will tell whether Trump's state visit has cleared the bilateral air of some of the present policy-making misconceptions stateside or was just another protocol trip.