A passage to Southeast Asia through Malaysia 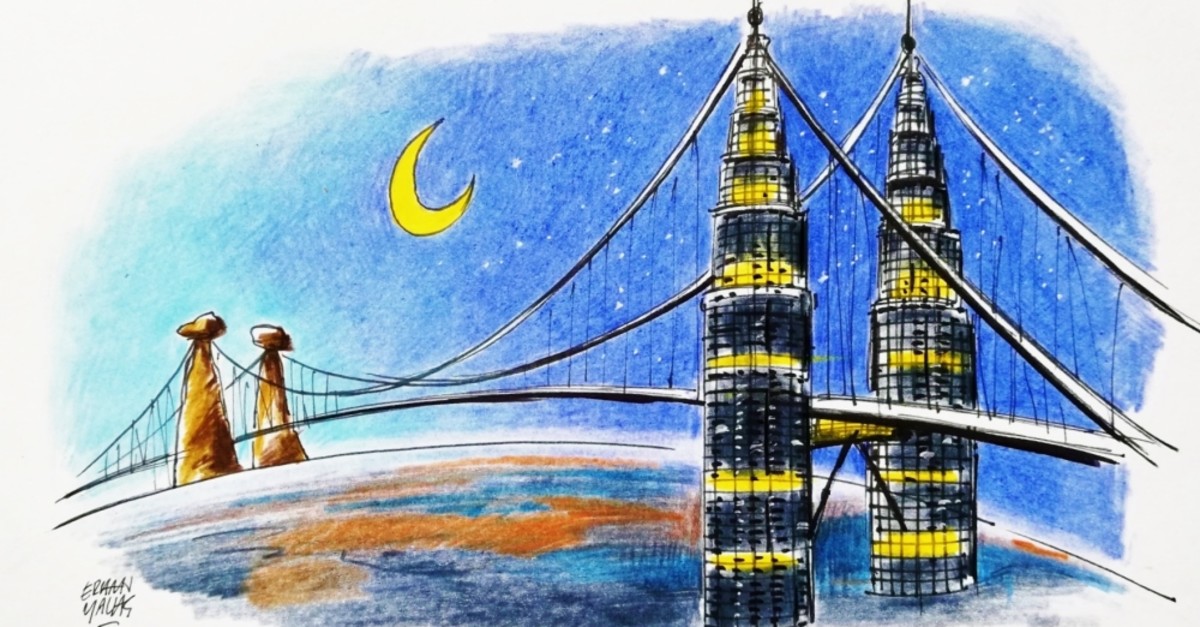 Malaysia is a Muslim majority country in Southeast Asia, with a population of over 30 million consisting of Malays (67.4 percent), Chinese (24.6 percent), Indian (7.3 percent) and other races (0.7 percent). Muslims make up slightly over 60 percent of the total population, followed by adherents of Buddhism (19.8 percent), Christianity (9.2 percent), and Hinduism (6.3 percent). In addition, indigenous religions such as Animism are practiced as well. It can be said that all religions and ethnicities coexist together harmoniously in Malaysia.

The arrival of Islam in Malaysia can be traced back to the 13th century via Arab and Indian Muslim traders and its spread across the country took place between the 15th and 16th centuries. Since then, Islam has been at the center of daily life in every Muslim household. Peace, harmony, unity and tolerance are vital components in the hearts of Malaysian Muslims as well practitioners of other religions in Malaysia. Therefore, it is easy to see Islamic, Western, Buddhist and Hindu influences in Malaysian society.

Since Malaysia's independence from Britain in 1957, these vital components have brought Malaysia political stability, economic welfare, as well as social and cultural harmony. Between 1957 and 2018, the political, economic and socio-cultural arena in Malaysia has seen enormous changes. These changes have been observed by many economists, experts, intellectuals and travelers from different countries and backgrounds

.Economic opportunities for TurkeyMalaysia is a fast-growing economy. It is the world's 36th largest economy and the 3rd largest economy in Southeast Asia according to the 2018 GDP rankings. Malaysia has a strong and diverse manufacturing economy focused on high-tech, electric, electronics, rubber and palm oil products. In addition, Malaysia is the global leader in Islamic finance, the 2nd largest palm oil producer after Indonesia, the 23rd country in Doing Business report by the World Bank, and a trustworthy and effective passage to the Association of Southeast Asian Nations (ASEAN).

Optimistic reports and research on Malaysia and the Malaysian economy attract more foreign attention to Malaysia in comparison to other South East Asian countries. The amount of foreign direct investment in Malaysia ranged between $9 billion and $12 billion between 2010 and 2017. According to data from the Malaysian Investment Development Authority (MIDA), the top five countries in terms of foreign direct investment are China, Switzerland, Singapore, the Netherlands and Germany, while key sectors for foreign capital are service, manufacturing, and mining.

Malaysia is a remarkable technological hub among other Southeast Asian nations with its own national brands, such as Proton which sold 49.9 percent of its shares to the Chinese car producer called Geely, during the rule of the previous Barisan Nasional (BN) government in 2017. On the other hand, Mahathir Mohammad, the leader of Malaysia since May 2018, has been displaying his desire to produce a new Malaysian automobile brand on every occasion. In addition, it is estimated that Malaysia's internet economy will see tremendous growth from $5 billion to over $20 billion throughout the next decade. Research conducted by both Google and Temasek Holdings since the last three years produced a joint report which predicted contributions of the internet economy into Southeast Asian economies will exceed $200 billion by 2025.

I have been living in Malaysia for six years. The main reason for my extended stay in Malaysia is that I feel at home here, and I really love the Malaysian people. I consider Malaysia to be my second home. I have not only visited many of the cities and surrounding islands, I have also met fantastic people during my journeys from Sabah and Sarawak, to Penang, Malacca and more states in this country. If I keep writing on the positive views I have about Malaysia, it would be a long storybook. However, apart from the positive aspects on Malaysia, I have seen small and manageable sectoral problems in the country during my journeys.

First and foremost, there is a cultural clash that is discussed by even many Malaysians, when it comes to the working environment between locals and foreign workers in terms of cleanliness, service, kindness and interaction in Malaysia. This is a sectoral problem that can be mostly seen in the service sector – restaurants and shops being prime examples. This small, but still burdensome problem can be overcome through basic training programs. In this regard, Turkey and Malaysia can cooperate on training foreign workers through their Tourism Ministries or NGOs as Turkey has one of the best service sectors in Europe. As an example, the Yunus Emre Institute and Independent Industrialists' and Businessmen's Association (Musiad) in Malaysia could play a role in this project. Tackling this problem will place Malaysia up to its desired position in the world tourism market.

Nonetheless, I am not satisfied when it comes to relations between Turkey and Malaysia despite political, economic, social and cultural ties that have been progressively enhanced. There have been various agreements, initiatives, reports, researches, visits and talks about ways to upgrade this friendship to a higher status, such as through the 2015 free trade agreement between Turkey and Malaysia (MIFTA). The total trade volume between the two countries is around $1.7 billion. However, the trade imbalance is in favor of Turkey, which imports products worth a total of roughly $1.4 billion from Malaysia, and exports products worth around $360 million to Malaysia. It should be noted that there are very strong indications that both Turkey and Malaysia would like to achieve more together in the coming years.

These two nations have the capacity to complement each other in many sectors such as education, health, defense, technology, tourism and trade. In this regard, Turkey was represented by significant names in the Turkish defense industry namely, ASELSAN, ASFAT, HAVELSAN, ROKETSAN, TAIS and TAI at the Langkawi International Maritime Aerospace Exhibition (LIMA-2019), which was held from March 26-30 at Langkawi Island. During the LIMA-2019, a Memorandum of Understanding between Turkish Aerospace and the Malaysian Aerospace Industry Association.

What are the few essential ways that Turkey has lacked in seeing the real picture of Malaysia?

To encourage more joint intellectual, social and cultural activities between universities. To find a common ground for Turkish businessmen to cooperate on economic terms. To open a Turkish market or street which should be undertaken by the consensus of business people. To truly understand the Malaysian market from the beauty sector to technology, and to consider Malaysia as a marketing hub to reach out to neighboring countries.