The haphazard Western response to the Bosnian genocide 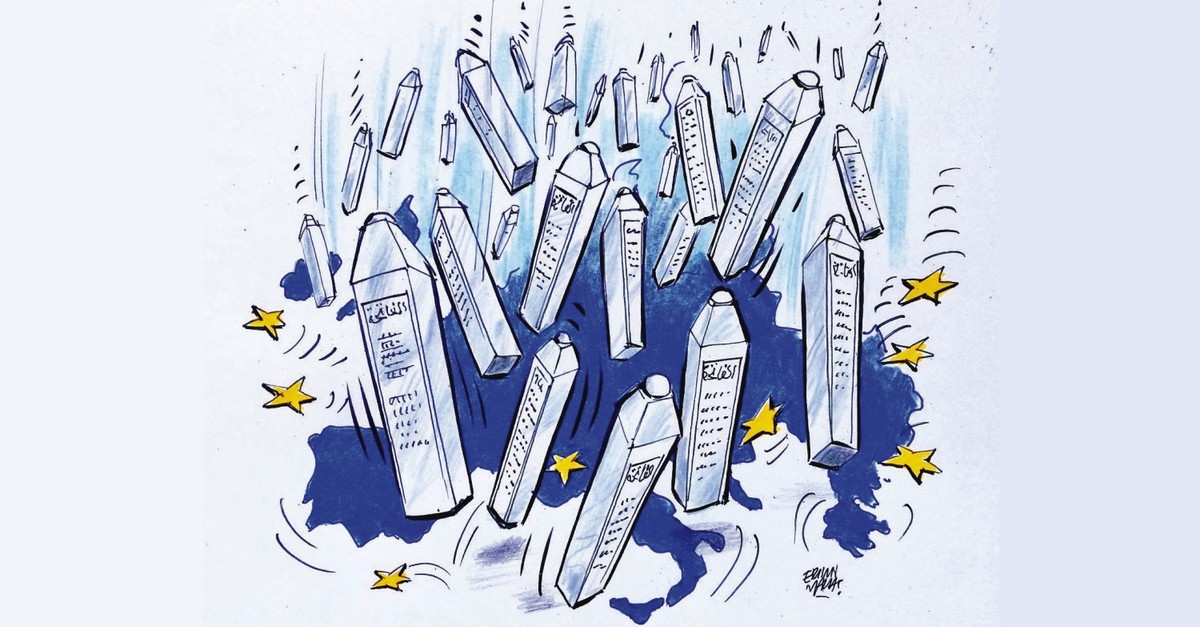 The former Yugoslavian republic of Bosnia-Herzegovina witnessed the longest and most violent European war in the second half of the 20th century. Seeking to avoid the moral responsibilities of responding to the Srebrenica genocide, many Western countries chose to view the conflict as a form of ethnic cleansing carried out against the Bosnian Muslims rather than genocide.

However, over the years the discourses pertaining to the Bosnian War and particularly the atrocities committed in Srebrenica (where over 8,000 men and boys were massacred) started to move along a linear path of truth.

The indictment of the culprits such as Gen. Ratko Mladic and Bosnian Serb leader Radovan Karadzic by the international tribunal for the former Yugoslavia (ICTY) was a day of victory and equal sadness for the victims of the war. Justice seemed as though it had been served, as both had received life sentences for the systematic genocide of Bosnian Muslims, however 24 years on and after the investigation the ethical and moral questions of global justice surrounding the non-intervention approach by the West vis-a-vis Srebrenica did not wither away.

As such it is imperative to revisit and ask why the international community was so slow at responding? Why did they take a non-intervention approach? Perhaps even question the complicity of Western nations in these crimes? These are the type of questions that arise when trying to comprehend the haphazard Western response to the Bosnian war and Srebrenica. Moreover Bosnia will forever remain a stain on the conscience of the West and as such the failure to act within due time warrants these ethical and moral questions surrounding their complicity in these crimes.

ERUPTION OF THE WAR

The collapse of communism in Eastern Europe added powerfully to the revival of "ancient hatreds" and communist rule had merely fossilized ethno-nationalism and power politics between different ethno-religious groups by driving them underground, meaning that ethnic and religious nationalism became the most natural vehicles for expressing anti-communism. In addition, political instability and economic uncertainty precipitated by the collapse of communism were a perfect breeding ground for a form of politics that offered an organic sense of collective identity.

This was most clearly demonstrated by the breakup of Yugoslavia in the 1990s through a growing stress on the politics of national and ethnic identity, which resulted in a series of wars and, for example, left the former Yugoslav republic of Bosnia divided into ethnically pure Muslim, Serb and Croat areas.

The war in Bosnia erupted after the people of Bosnia requested a referendum for an independent Bosnia encouraged by the European Community. This rejection of an independent Bosnia by the Serbian macro-nationalists in the Yugoslav army led to Bosnian Serb irregulars to launch a brutal ethnic cleansing campaign against non-Serbs to create a greater Serbia in Bosnia in March 1992.

When news spread to the international community regarding the violence in Bosnia, there was widespread acceptance among journalists that this conflict was simply a further manifestation of the unchecked nationalist hatreds that had been widely reported. However, this violence was far from a manifestation of unchecked nationalist hatreds, it was a campaign designed to expel and eradicate Bosnian Muslims and Catholic Croats from their land.

The European Community's response to the massacres of Bosnian Muslims was more concerned with the cost of intervention. The British and the French were similarly concerned with the cost of intervention. The British were one of the biggest obstacles in coming to a collective decision on Bosnia. Even Tadeusz Mazowiecki, the first democratically elected prime minister of Poland, and United Nations rapporteur on human rights, observed in May 1993; "any time there was a likelihood of effective action, a particular Western statesmen intervened to prevent it."

British statesmen and diplomats were fully informed of events on the ground and the magnitude of the human rights violations taking place in Bosnia. They were fully aware of the atrocities that were taking place in the rape camps, before these barbarities became public knowledge.

Since the beginning of the Yugoslav crisis, Britain sought to sabotage any kind of international political and later military intervention to curb Serb aggression and ethnic cleansing. Not only was Britain alone in opposing the idea of an armed intervention to safeguard the passage of humanitarian aid to Bosnia, but also they dismissed U.S. plans for lifting the arms embargo on the Bosnian government, as they feared it would lead to more bloodshed. Britain worked to wreck any initiative on behalf of the Bosnian government, which it regarded as rash or unhelpful, particularly those involving a military dimension.

Even by early 1995, the British policy on Bosnia had not changed; policy on Bosnia had reached a complete dead end. London continued to argue that the Bosnians should not be allowed to protect themselves because that would endanger the troops sent to protect them, but who had failed to do so. More importantly, the deployment of the United Nations Protection Force (UNPROFOR) was nothing more than a failure, as U.N. commanders on the ground called for military intervention.

In 1992 U.N. commander Gen. Abdulrazek stated "we are not making any progress. The situation is deteriorating… All our efforts here to save lives and restore utilities have failed." Furthermore, he demanded a deadline against Bosnian Serbs to be accompanied by the threat of force. The calls from these men on the ground did not rush British statesmen to rush and endorse their calls for intervention. Better yet, it allowed them to reiterate their concern that any military action would make the situation worse. However, this inaction has certainly damaged Western, in particular British, credibility.

Britain's inadequacy to deal with the Bosnian war, delivered by Margaret Thatcher remains as valid today as was in 1992 and deserves to be quoted in full:

"We could have stopped this. We could still do so. We have sent a small number of our brave highly professional servicemen to accompany inadequate supplies before the Serbs and the winter kill them. But for the most part, we in the West have actually given comfort to the aggressor. We have continued to treat this war of aggression by Serbia as if it were a civil war. We have repeatedly stated in public that we will not intervene militarily, so removing even a nagging uncertainty from the minds of the generals in Belgrade. We have accepted the flouting of successive Security Council resolutions by Serbia, whose aircraft are still free to drop cluster bombs on women and children."

It is clear that Britain was a great obstacle to collective action on Bosnia, it is clear they were very aware of the atrocities that took place in the death camps and refused to act. As such, they bear a heavy share of responsibility for the atrocious crimes committed against the Bosnian Muslims and as such remain complicit in the crimes committed against the Bosnian Muslims.

As the violence became worse in the former Yugoslavia, international perception on the conflict dramatically changed. The world started viewing the Bosnian Muslims as victims and as such demanded action to be taken to put an end to Serb aggression.

Even world leaders started to sense that the growing violence, coupled with what they viewed as Serb aggression, would inevitably spill over into Kosovo, Macedonia and Albania. Hence, finally the decision was made to intervene.

This decision remained driven by the escalation of geostrategic threats to the Western world and was a response to unspeakable crimes committed in Srebrenica. After years of fighting the inability of the Western world to come to an agreement on how to handle Serbian armed forces, forced NATO to intervene.

This intervention became more imperative as the international community grew restless. It was on February of 1994 that NATO issued an ultimatum to all forces fighting within 20 kilometers of Sarajevo to hand over their heavy weapons and to refrain from attacks within the area.

If they failed to do so, heavy weapons of any of the parties found within the exclusion zone, along with their military support facilities, would be subjected to NATO air strikes. However it is important to note that the NATO strikes on the Bosnian Serb forces were more of a moral obligation and because of the inconclusive Western policy toward Bosnia did nothing to stop the systemic genocide of Bosnian Muslims in Srebrenica.

The mass increase of international coverage made it increasingly difficult for governments to censor better yet restrict information thus their sense of moral responsibility to their own people. As such world leaders succumbed to pressure by the public to take action against Bosnian Serb forces.

In the case of Britain the conservative government was not only well disposed toward Milosevic's Serbia, but determined to prevent any U.S. action against it. In the case of the United States, President Bill Clinton succumbed to the pressure of Congress to take action against the Bosnian Serb forces. Additionally, in that same year Francois Mitterand replaced Jacques Chirac as French President, and as a result changed the position of France in relation to the Bosnian conflict.

The horrors of the Bosnian war were not just a derivative of war, rather the primary aims of Serbian forces and involved practices so wicked and evil that they defeat language and defy comprehension. In July of 1995 the Bosnian Serb military forces under the control of Ratko Mladic and Radovan Karadzic besieged the United Nations designated safe area of Srebrenica. As a result of the relentless Serb aggression the Bosnian Muslim residents decided to flee to the nearest United Nations safe zone in Potocari or in large volumes to the district of Tuzla. Those who were either captured or could not make it were taken in droves and subjected to the most obscene acts one can imagine. The killings by Bosnian Serb soldiers, under the strict command of Karadzic and Mladic resulted in the deaths of thousands of people. The International Criminal Tribunal judge Fouad Riad described the barbarity in these words;

"Thousands of men executed and buried in mass graves, hundreds of men buried alive, men and women mutilated and slaughtered, children killed before their mothers eyes, a grandfather forced to eat the liver of his own grandson. These are truly scenes from hell, written on the darkest pages of human history."

The Research and Documentation Center in Sarajevo reported that "over 100,000 Bosnians were killed between 1991 and 1995" and of these "80 percent were Muslims" moreover, it is important to note that the atrocities committed against Bosnian Muslims were no means a byproduct of war. It was indeed planned and systematic genocide. The conflict was formally ended by the signing of the Dayton and Paris Peace Accords in November of 1995.

Fears of domestic repercussions and different national interests have most definitely played a role in defining the haphazard Western response to the crisis in Bosnia. The claim that ancient hatreds were the only causes to such atrocities committed by the Bosnian Serb forces is to deny the persecuted Bosnian Muslims justice and agency.

It is clear to the international community that the offensive by the Serbian forces was indeed a systematic campaign of violence, that was designed to exterminate Bosnian Muslims and ethnic others to fulfill their irredentist dream of creating a greater Serbia.

It is also clear that the role of Bosnian Muslims as the other was due to their historical Ottoman heritage, which isolated it from the West and thus fueled decisions for non-intervention. The inaction to prevent the atrocities reminiscent of those implemented in World War II makes the West complicit as they stood idly by and allowed Serbia to wage an irredentist war. Consequently, they will forever bear a heavy share of responsibility for the atrocious crimes committed against the people of Bosnia.