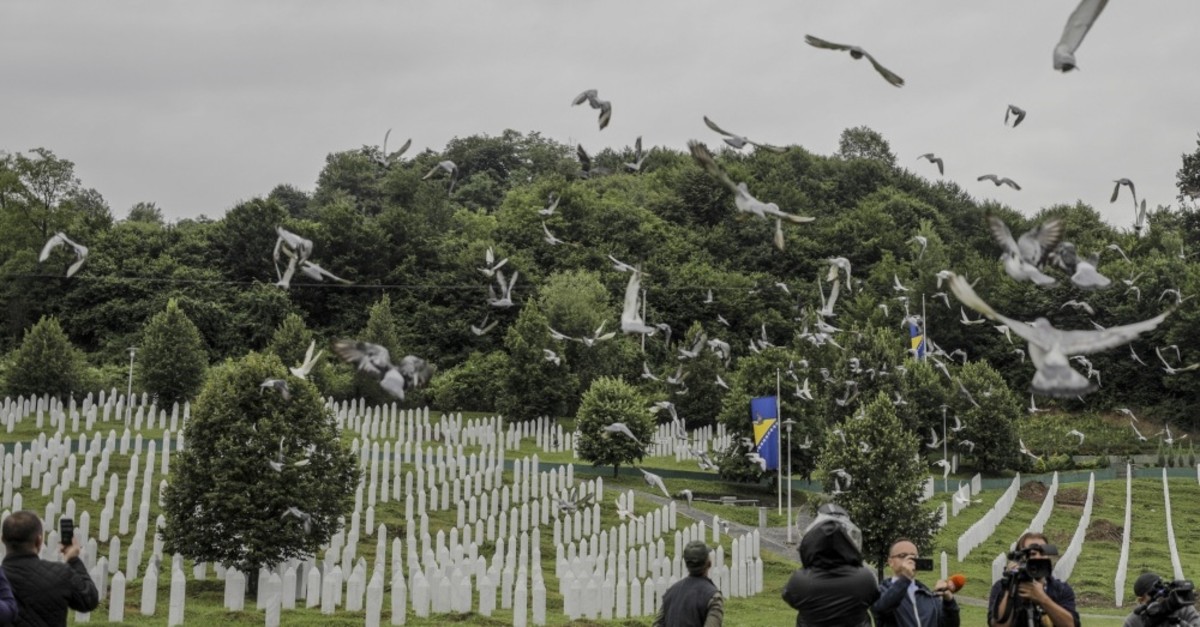 Pigeons fly over as people visit the memorial cemetery of the victims of the Srebrenica genocide, in Potocari near Srebrenica, Bosnia, July 10, 2019.
by Elif Selin Çalık Jul 12, 2019 12:51 am

Women's peace-building and reconstruction efforts in Srebrenica must be supported, not only because it is the right thing to do, but also because most nations consumed by conflict need the strength of their women

In July 1995, the safe haven of Srebrenica in Bosnia-Herzegovina was attacked by Bosnian Serb forces resulting in the deaths of between 8,000 and 10,000 individuals.

The Srebrenica anniversary is organized annually on July 11 and attracts and mobilizes local and international human rights activists, relatives, survivors and governmental representatives from around the world.

However, no U.N. secretary-general has ever visited the graveyard and every year, tens of thousands of people gather to pay their respects to the dead and bury those who have been found and identified after years of being missing and a number of heads of state have made their way to Srebrenica-Potocari to express their condolences and remorse.

Additionally, we have gotten used to seeing pictures of crying Srebrenica mothers every year in July. These images are the symbol for the more than 800 people slaughtered in Srebrenica. But, are they reflecting the real power of women from Srebrenica? It is sure that these women's power is beyond these suffering images.

On March 6, 2008, a newly elected prosecutor of the International Criminal Tribunal for former Yugoslavia (ICTY), Serge Brammertz, in his first visit to Bosnia-Herzegovina met representatives of the government, the State Court officials. He also spared his time to meet with the representatives of the local nongovernmental association "Mothers of Srebrenica."

As a Turkish researcher living in Sarajevo, Brammertz's visit triggered my curiosity. Why did Brammertz, the representative of the most important institution dealing with war crimes in the former Yugoslavia, prioritize a meeting with a group of elderly and semi-literate women on such a short visit?

The "mothers" play a significant role in the complex processes of transitional justice in Bosnia, while lobbying at the same time for prosecutions, truth and reconciliation. Their struggles and gains are contextualized in this piece of writing with an aim to explain at least some of the reasons why it was necessary for Brammertz to meet with the mothers. The mothers use a variety of non-violent methods, such as symbolic demonstrations, peaceful marches and public gatherings and speeches as well as media exposure, to achieve their goals.

These mothers explicitly state that they are not feminists who are "fighting for women's rights" but mothers searching for their loved ones, these women create an important space for widows and displaced women to share their concerns and support each other.

Timeline of the activism

In July 1995, the safe haven of Srebrenica in Bosnia-Herzegovina was attacked by Bosnian Serb forces resulting in the deaths of thousands.

Members of the Dutch battalion who were responsible for the safeguarding of the enclave were completely overrun by the forces of Gen. Ratko Mladic.

On June 4, 2007, lawyers representing 10 women from Bosnia-Herzegovina issued a writ of summons at the District Court of The Hague commencing a civil procedure against the United Nations and the government of the Netherlands. The Association of the Mothers of Srebrenica represent 6,000 women who lost family members during the Srebrenica genocide in 1995. They filed the civil suit to receive compensation and the acknowledgment of the responsibility of the Netherlands and the United Nations.

On Nov. 7, 2007, leave to proceed against the United Nations was granted by the court in the failure of the latter organization to appear in the proceedings.

On July 10, 2008, the District Court of The Hague held that the U.N. enjoyed absolute immunity and that the court did not therefore have jurisdiction to hear the case.

The Mothers of Srebrenica appealed to the Supreme Court.

In September 2012, our association received a prize from the World Women's Congress in New York for our fight for truth and justice. The association, in partnership with the Victims and Witnesses of Genocide Association, organized the international conference "The research process, documentation and prosecution of genocide in Bosnia-Herzegovina." The conference was held in June 2015, and attended by then president of ICTY, Theodore Meron and current President Carmel Agius, Brammertz – chief prosecutor at ICTY, as well as current and former prosecutors including the first U.S. Ambassador for War Crimes, David Scheffer.

On July 16, 2014, the District Court of The Hague decided in the civil case filed by the Mothers of Srebrenica against the Dutch State that the Netherlands is liable for the loss suffered by relatives of the more than 300 Muslim men who were deported by the Bosnian Serbs from the Dutchbat compound in Potocari on the afternoon of July 13, 1995, the majority of whom were then killed.

In the present decision, the Supreme Court upheld the earlier decisions of the District Court of The Hague and the Court of Appeal of The Hague confirming that the U.N. enjoys absolute immunity from prosecution, even in light of the gravity of the accusations alleged by the Mothers of Srebrenica.

Genocide joins together the Greek "genos" (race) with the Latin "caedere" (to kill) to name behavior that had been known as not defined conceptually and legally. In the 21st century, as genocide continues to be in evidence in the world, the hardest lesson may be that human beings are rarely able, as individuals or working as nations, to prevent or postpone the wholesale slaughter of innocent groups.

Women survivors of the genocide, such as Mothers of Srebrenica, have continued their struggle for international recognition of the wrongdoings committed in and around Srebrenica in July 1995, and this has been reflected in their publication, "The United Nations and Srebrenica's Pillar of Shame," as well as in court cases against the U.N. and the Dutch government.

Compensation for the survivors of the Srebrenica massacre should be secured. All indicted and suspected war criminals, and all those complicit with genocide, should be arrested and brought to trial."

While these mothers were fighting for justice, some researchers and politicians used the Srebrenica genocide only for their benefits. "Many people have acquired their doctorates degrees studying us, but no one helps us," one member of Mothers of Srebrenica said bitterly during our interview in 2013.

We cannot expect women to do all this alone. Their efforts must be recognized, valued and supported. To build peace and contribute to the rebuilding of their countries, women need resources, skills, authority. Despite the work they have done on the ground, they are not at the peace table when warring factions sit down to negotiate. No one is held accountable for the enormous crimes committed against women.

Women's peace-building and reconstruction efforts must be supported, not only because it is the right thing to do, but also because most nations consumed by conflict need the strength of their women. The women are the ones who held their families and communities together during the worst of the fighting, even while on the run from armies. They keep a measure of stability during times of chaos and during displacement. Now, as peace accords are negotiated and countries are rebuilt, those contributions must be recognized.