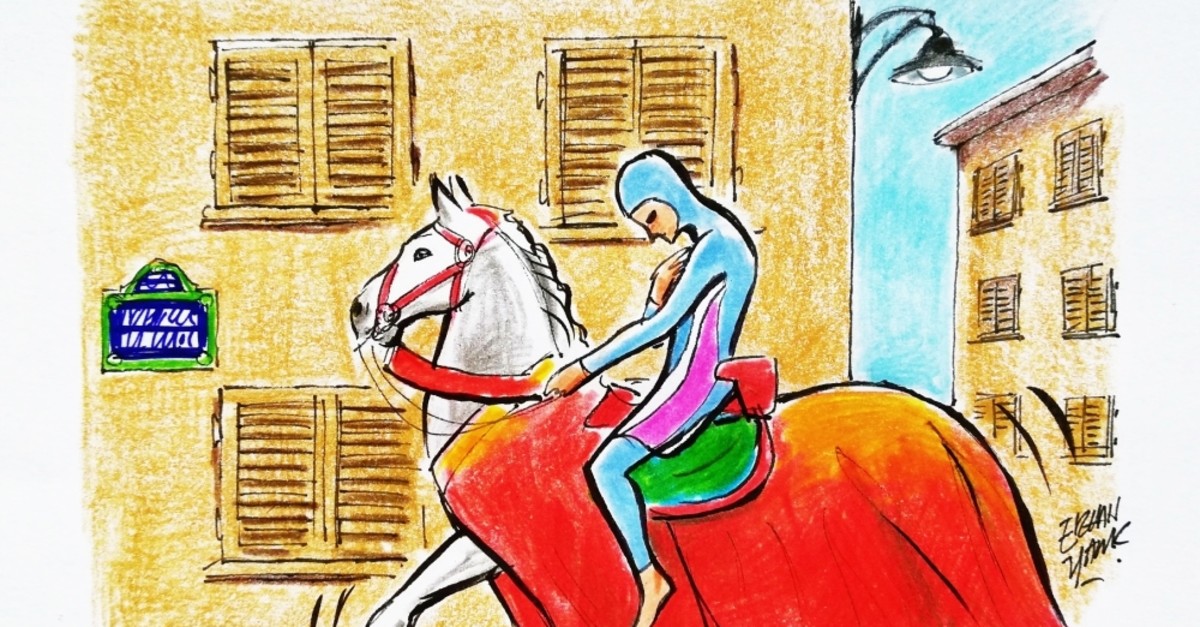 The poignantly disturbing image of armed policemen forcibly removing a piece of clothing called a burkini from a woman on a beach in France is a very sad reminder of the new state of an increasingly intolerant world.

An act that could echo only with the moral police of the despised theocracies of the world, this particular secular charade by French authorities is yet another low on the part of the liberal democracies in what has widely been perceived as a war of ideas between two supposedly different civilizations – a view revitalized since Sept. 11, 2001, when al-Qaida terrorists wreaked havoc in the United States. Curbing liberty and choice, resistance to diversity, aversion and fear for the other and violently forcing minorities to strictly conform to the "norm" set by the mainstream, these hallmarks of a totalitarian regime have slowly and silently crept their way into the land considered the epitome of "liberty, equality and fraternity."

Causes of the ban

In this French brouhaha surrounding the burkini issue, at stake is not just the impact of this ordinance or its subsequent overruling on the immediate effected population, Muslim women, but it also essentially inflicts a severe dent if not an all-out rupture in the enlightenment project of modernity, of which France has been a strong admirer. The two argued legal points underlying the ban, namely overtly religious symbolism and the risk to public health and hygiene, are ludicrous at best, clearly indicating interpretative fallacy with closer scrutiny. Aware of the wider implications, the higher courts have rightly questioned the link of clothing to a dangerous effect on public health.

Coming in the immediate context of the Nice attack, this ban is bound to provide more fodder to extremists on both sides of the ideological fulcrum – far-right Christians and Islamic fundamentalists.

Realizing its pernicious consequences on the collective psyche of an entire community and its impact worldwide, the United Nations has been prescient enough to warn about the prospect of this ban fueling further intolerance and stigmatization of Muslims in France. Terming it a grave and illegal breach of fundamental freedoms, United Nations Human Rights Office spokesperson Rupert Colville emphatically underlined, "By stimulating polarization between communities, these clothing bans have only succeeded in increasing tensions and as a result may actually undermine the effort to fight and prevent violent extremism." This could very apparently be seen in the behavior of the onlookers on the beach when the French policemen implementing the burkini ban were supported by a chorus of "Go back to where you came from," "France for the French only" and other such slogans.

Feeding itself on the recent rightward shift in European politics, the generally popular argument in support of the ban is the irrational perception that whoever "willingly" comes to a different culture must conform to the prevailing norm.

Parallel with the existing rule in theocracies like Iran and Saudi Arabia is also very comfortably appealed contentedly. If after so many years of debate around the issue of multiculturalism in Europe, the leaders of the mainstream parties of France make clothing the issue of their electoral campaign, it is seriously a matter of grave concern. Moreover, the French claim of basing the ban on strict adherence to laicité, or secularism, doesn't seemingly have much ground as the timing and the context of the injunction sufficiently prove otherwise.

Furthermore, a state with more than half of its national holidays conforming to a particular religion can't be more blatantly hypocritical if it offers the principle oflaicité as a plea for the burkini ban.

Politicization of the human body

While it is tempting to sweepingly minimize the complexity of the prevailing predicament in the upsurge of growing Islamophobia worldwide and the strict adherence of France to laicité, it is urgently important not to miss the point that, even in the 21st century, human bodies have, once again, become the site of political contest. This is not just sad but regressive beyond condemnation. The notion of a virile prince coming to the help of the "damsel in distress" is somehow insidiously implicit in this burkini row.

"Their" women who are in distress need to be rescued has all along been one of the pertinent justifying principles of European colonialism, which the discerning work of Edward Said, "Culture and Imperialism," has thoroughly explored.

Extending that same logic, the burkini needs to be forcibly removed because "we," white men, could only know what is good for "them" – the uncouth, uncivilized and ill mannered. Former French Prime Minister Manuel Valls' characterization of the burkini as a "symbol of enslavement of women" and the other aspiring candidate, former French President Nicolas Sarkozy's, open remark that court rulings would be undone by parliamentary amendments are cases in point.

This emerging intolerance, which lets the French policemen forcibly remove the apparel of one's choice publicly, is indeed a terrible manifestation of extreme racism and overt sexism women are subjected to.

In the loud din of men's voices, women's take, no matter how intellectually sound and legally tenable, fails to find takers. Mentions may be made of Osez Le-Feminism, the famous French feminist group which, for example, has vehemently criticized the anti-burkini ordinance, pointing out that on the pretext of potential religious exploitation, French authorities are actually forcing Muslim women "to live under religious oppression," thus clearly suppressing their fundamental freedom.

Similarly, pointing out the uniqueness of this shrewdly designed apparel, Aheda Zanetti, the creator of the burkini, has fervently reiterated the liberating aspects of this piece of clothing.

Underlining that the burkini is not something that should be mistaken for oppression or an overt symbol of Islam, it is a garment to suit a modest person or someone who has skin cancer, or a new mother who doesn't want to wear a bikini. However, under a misguided notion of ultra-superiority, evident all the more in terms of fashion and reminiscent of the erstwhile French colonial arrogance, these nuanced arguments about the burkini by feminists fail to break through the media noise.

In the atmosphere of ever-increasing religious extremism the world over, the banning of the burkini in France on the assumption that it symbolizes dangerous, overtly religious exceptionalism marks a really sad moment in its history. It not only distressingly highlights the deepening social fissures in French society but also underscores religious tensions prevailing worldwide.

This has all the indications of a future catastrophe as the post-Brexit U.K., Trump's United States, the bleeding Middle East and resurgent Russia along with revitalized Iran, bruised Saudi Arabia and religious India all show signs of growing religious intolerance in different degrees. Emboldened by this French move, they may try this comfortably easy route of division, creating tactics leading to further sectarianism and enhanced xenophobia. There will be broader regional ramifications and global strategic implications from this French move, whose effects will be felt both intrinsically and globally.