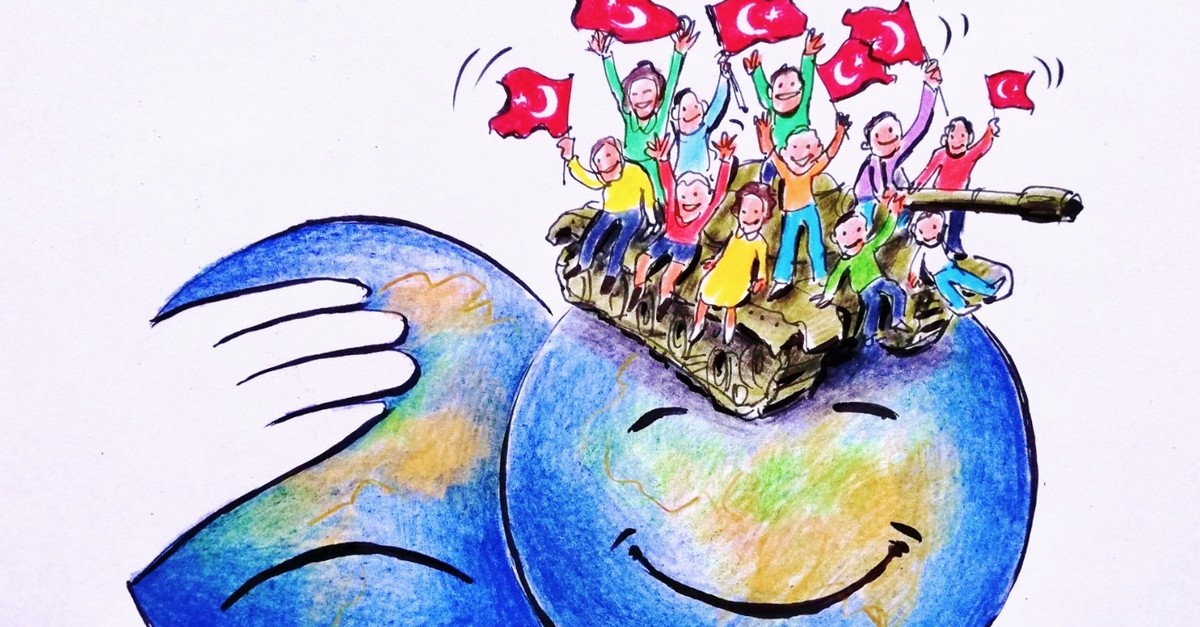 Three years have passed since the attempted military coup staged by the Gülenist Terror Group (FETÖ). Our nation experiences the proper pride of defeating that attempted coup under the leadership of President Recep Tayyip Erdoğan. For what we witnessed on that night was an epic story that is rarely seen in history, with people standing up to heavy weapons with their bare hands. Orchestrated by the Gülenist elements nested in the army, disciples of the fugitive terror suspect and FETÖ leader Fetullah Gülen, who currently resides in the U.S., the attempted coup aimed to topple Turkey's elected and legitimate president Erdoğan and overthrow the legitimate Justice and Development Party (AK Party) government, which secured 49 percent of the vote in elections only seven months ago.

However, on the night of July 15, the political will, citizens, patriotic soldiers and police officers and the media joined forces and thwarted the coup. All of them were victors on that night. Not only did democracy triumph, but also the putschists and the mindset they represented lost. The other two losers of the night included global political actors and the global media or foreign journalists. The attitude of foreign media outlets, with a special focus on their content, has been examined in numerous reports in Turkey. These can be accessed in both Turkish and English.

Whereas, if the issue had been approached from the perspective of the universal acquisitions of democracy, Western media outlets would have been able to provide people of the world with reports covering the exemplary and heroic deeds of ordinary people: the bravery of those who stopped tanks with their bare hands, whose bodies were mutilated by bombs dropped by warplanes. Such reports would have not only turned them into legends but also made a great contribution to the collective memory of humanity. But somehow Western media organizations have chosen to ignore these examples. Western reporters still mention in articles and reports the famous "Tank Man," who stood in front of a column of tanks in China's Tiananmen Square in 1989 on various occasions. But their willful ignorance of the epic resistance on the night of July 15, 2016, during which many similar incidents took place, is definitely a conscious choice. The surest sign of it is that they not only ignore July 15, but also try to portray it as far from the truth as possible.

It's hard to say that a new approach has emerged during the past three years in the mainstream Western media. On the contrary, while they highlight contents that support their early stance, they also offer marginal perspectives that draw upon this negative background and frame a discourse that directly targets Turkey and President Erdoğan. In this context, it's possible to show how much the perception of Turkey in Western media has gone beyond democratic boundaries, by examining one of the most remarkable examples.

Tobias Huch, a correspondent for Yahoo News, posted a message on his social media account in February 2018. The content of the message, which directly targets President Erdoğan, has been debated recently. Shared by a lot of users on social media, the content sparked huge reaction. Huch's post included a photo showing Saddam Hussein, former president of Iraq before the American invasion, moments before his execution. A hangman in black balaclava slips the noose over Saddam's neck. What happened next is known to the whole world. Saddam Hussein, whose country was invaded and divided, was hanged on Dec. 30, 2006, on the first day of the Muslim feast of Eid al-Adha. If Tobias Huch had only posted this photo, he might not have drawn the attention of the Turkish public so much. But he placed the following note on the photo: "Next: Erdoğan." In other words, the next to be hanged is Erdoğan. Grisly, but true. With this note, he reveals to the public that he wants Turkey's President Erdoğan to meet a similar fate. That a journalist from the Western media targets Turkey's president in such a vulgar way is inhuman behavior in the first place. Setting aside international codes of conduct that describe the limits of journalism from a humanistic perspective, it is incompatible with human rights and basic values when a person targets another person and posts content calling for his execution. Since the targeted person is a leader who governs his country with the support of millions of voters, the posted message targets not only the leader but also the Turkish people's will.

Of course, implications of this social media post's meaning are not limited only to that. From a semiotic reading, the message "Next: Erdoğan" is the explicit meaning. In other words, the journalist unambiguously calls for the execution of another country's president. This approach represents first and foremost a hostile attitude that rejects respecting democracy and fundamental rights. The implied meaning of the same signifier is open to interpretation. It allows for different readings. But the first thing evoked by the message about Saddam Hussein is what happened to Iraq before his execution; namely, invasion and disintegration. This is highly probable. To put it differently, it's not hard to conclude that by posting this message, Huch also calls for the invasion of Turkey like Iraq.

What this case implies is far beyond the boundaries of journalism. That a journalist did this reveals the extent of hate that the image of Turkey and Erdoğan in the Western world is faced with. Seizing upon a conducive atmosphere, Turkey's president and, by extension, the Turkish nation can be targeted. For this reason, such approaches that are totally incompatible with democratic and journalistic principles should be condemned first by Western journalists through their media outlets. Undoubtedly, there are also other journalists working for Western media organizations, who take a more levelheaded stance on this issue and on different countries. But it seems that their voices are suppressed by the noise of a biased crowd. Maybe they cannot speak out. That they kept silent in the face of such blatant targeting of a president and the epic resistance during the July 15 coup raises suspicions. As a result, the perception of Turkey in Western media continues to be negative. It appears that, instead of objectively evaluating issues like Turkey's purchase of the S-400 missile defense system from Russia to protect its territory and trying to understand it, these moves are exploited for further hostility.

Ultimately, we can claim that the atmosphere that gave rise to this example persists. If Western media organizations had approached the issue from the perspective of democratic standards, instead of accusing Turkey during the three years since the July 15, 2016, they could have easily recognized both the FETÖ network and the threat it poses to their own countries in the long run. Surely, there is still a chance to do it. They still can do this and at the same time remove the atmosphere that paves the way for the emergence of marginal messages and content that target both a president and, by extension, the popular will.