What's going on in Moldova? 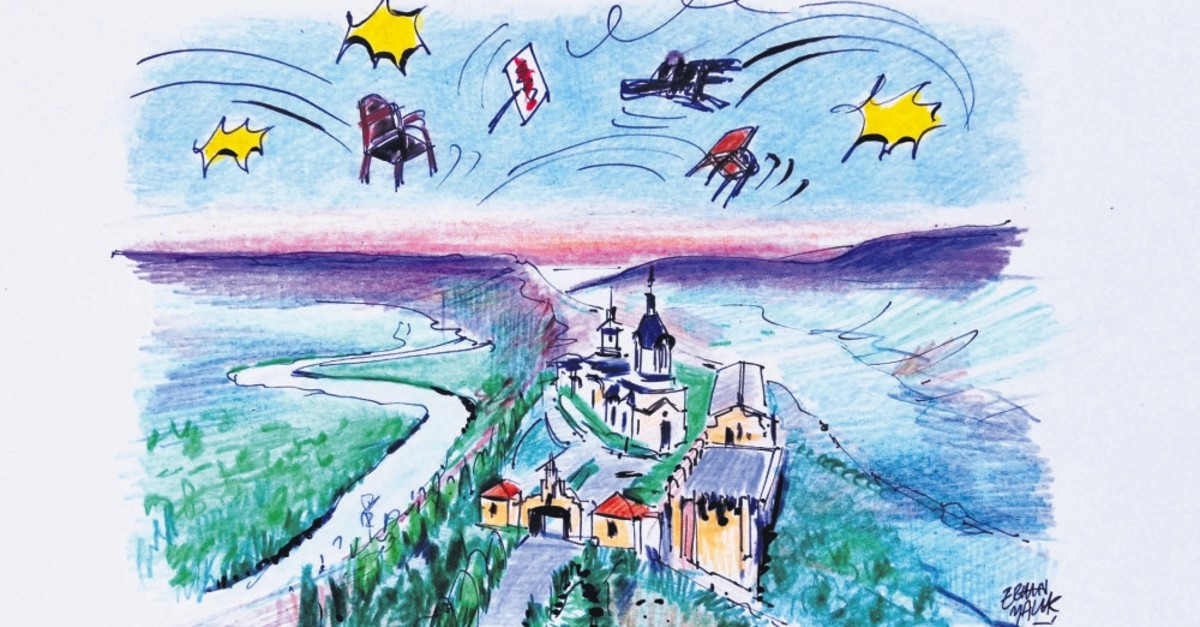 The flamboyant political activity experienced globally in June somehow overshadowed the events in Moldova, Turkey's close neighbor and partner, which put an end to the vicious regime of robber baron Vladimir Plakhotnuk who had de facto ruled the country until recently.

The situation in Moldova had become increasingly absurd when the corrupt robber baron Plakhotnuk monopolized the country in pursuit of his extensive business interests and political ambitions. The situation turned into a matter of joint concern for Russia, the EU and the U.S., the three most powerful regional actors, when Plakhotnuk resorted to skillful manipulation and games leading to a potential clash of interests.

The developments eventually produced a surprisingly successful collaboration between Russia, the EU and the U.S. who revealed a rare unanimity in their approach to the situation in Moldova in June and resolved the power crisis. Their concern was centered on the emergence of two parallel sovereign powers which could have spilled into an open conflict.

Eventually, the Plakhotnuk regime was ousted from power and the coalition of the pro-Russian socialists led by Igor Dodon and the pro-Western ACUM bloc headed by Maia Sandu took rule over the country.

The resolution to the Moldova crisis is a unique example of the successful collaboration of Russia, the EU and the U.S. since the 2014 Ukrainian crisis, although it's an exception rather than a potential scenario for resolving other regional conflicts.

As for Moldova, its current concern is to build stamina and develop as an independent and sovereign state and safeguard itself from turning into a zone of special interest for a single regional actor. The program of the newly-elected government, jointly approved by Dodon's socialists and Sandu's ACUM, envisions the EU association agreement to serve as grounds for Moldova's reforms and the measures to be introduced by the government.

The prime minister is an adamant supporter of the European way for Moldova's development, while President Dodon is Russia's man in Moldova.

Although it is resolved now, the power crisis in Moldova erupted on June 8 when the socialists supporting Dodon and the pro-Western bloc of Sandu made a coalition in parliament that deprived the democrats of Vladimir Plakhotnuk of power.

Having lost to the coalition, the democrats had nevertheless refused to leave office and recognize the new government of Prime Minister Maia Sandu; they declared themselves the only functional power. Both governments resorted to substantiating the legitimacy of their claims that produced a bizarre and ridiculous situation of duality in the ruling power in Moldova.

As a next step, the democrats, in actual control in the country, labeled the coalition government as the "Kremlin's puppets" and made the police and special forces block their access to the government central offices and other administrative buildings.

Furthermore, they declared former Prime Minister Pavel Filip, a close affiliate of Vladimir Plakhotnuk, as their recognized head of government and brought protesters supporting them onto the streets.

The situation became weird indeed. The new Moldovan authorities, regardless of enjoying a parliamentary majority, found themselves in no position to enter their administrative headquarters to perform their duties. The stalemate that emerged was brought to the attention of the Venetian Commission under the Council of Europe that, having given a preliminary consideration, agreed a "fully functional government" was established by the national parliament "based on an achieved majority established by a political agreement." However, the commission's final decision became unnecessary when the three regional actors, Russia, the EU and the U.S., brought the situation in Moldova under control and resolved it.

On June 8, revealing rare unanimity, the EU and Russia recognized immediately the government of Prime Minister Sandu as legitimate, while the U.S. joined them later to establish a consensus.

The last bit that went in favor of the coalition government was a visit to the Democratic Party's office on June 14 by Dereck Hogan, the U.S. ambassador to Moldova, and his 15-minute private conversation with Vladimir Plakhotnuk, still in de facto control of the country at that moment, after which the robber baron stepped down. The developments revealed the dependence of Moldova on external actors, while the lion's share of the contribution was shouldered by Russia. They also symbolize, the first in years, of the meaningful success of the Russian effort in Moldova.

The government of Maia Sandu faces the demanding task of building a better life in the country now. "Moldova would become more democratic and the living standards would improve if we learn from the EU how to better govern our country and what kind of economy to build," believes the prime minister. In impoverished Moldova, an average salary hardly exceeds 6,446 leu (around $350) and the pension is 1,793 leu, unemployment is chronically high and the outflux of those seeking a better life abroad increasingly grows thanks to the close relations with Russia and a visa-free regime with the EU.However, Moldova is divided into two, namely the supporters of European integration and those for closer ties with Moscow. President Dodon is a staunch follower of the pro-Russia course although Moscow has favored the socialists' alliance with ACUM, even a temporary one, in order to cleanse the government agencies from Plakhotnuk's people and to build conditions for unbiased and independent national elections.

As such, the coalition of the pro-Russian socialists and the pro-Western ACUM has emerged as a situation-based alliance backed by a temporary political agreement. Its job is to fully demolish the robber baron regime of Plakhotnuk and built anew the government institutions.

"If the people had not been so intimidated by the Plakhotnuk's regime, our coalition would have never happened," admitted Sandu, "Everybody wanted to get rid of him, the supporters of both the European integration and those who want closer ties with Russia."

Dodon was soft and compromising by saying on June 14: "The previous government has recognized its defeat and left office, and this decision is important and symbolic."

For years, the Socialist party was formally considered pro-Russian, while held hooked by Plakhotnuk and playing on his side, and its current alliance with ACUM is an earned result of Russia's effort. When commenting on the established coalition government, Kremlin's spokesperson Dmitri Peskov acknowledged "Russia's readiness to work with the new government of Moldova."

Following up on the positive feedback, Dodon voices an opinion today that the Socialist party and ACUM, having made a time-framed coalition to oust from power Plakhotnuk, and may well sign a fully fledged alliance agreement to stay in power through the whole four-year parliamentary term.

Sandu was more direct and concrete in her June 14 address: "For clarity, the government that doesn't exist can't resign… [Pavel] Filip's government stopped existing on June 8."

She proceeded by promising to bring to justice all those who "abused the law by blocking access to the government offices, resorted to threats and blackmail and the assistance of paramilitary groups, attacked journalists and refused to recognize the legitimate government. They will answer for all they have done and very soon the independent judicial authorities will punish citizen Plakhotnuk and all those who abused the law by carrying out his orders."

The prime minister is an adamant supporter of Moldova's future development free from the robber baron's rule and dependence of geopolitics while focused on EU accession. "One day, Moldova will be ready to join the EU," she has said.

Moldova requires a reboot, and "newly building its democratic institutions and restoring badly damaged public trust in the country's authorities," is what is needed acknowledged Sandu when visiting the EU's headquarters in Brussels on July 3.

The EU welcomes Moldova's readiness to proceed with reforms, according to the EU Commissioner Johannes Hahn. He said, "We are pleased to note the de-politicizing efforts and strengthening independence of the government institutions, and in the fields of law and justice and fighting corruption particularly. The latter looks to be deeply rooted and is likely to pose the biggest problem before the government."

Trade and economic relations with Russia are pivotal for Moldova, and the former's support of its reform effort is important. Unimpeded exports of Russian gas are crucial and talks are ongoing these days on gas price reduction and the extension of the gas contract, which expires at the end of the year.

In 2018, Moldova bought 3 billion cubic meters of Russian gas that accounted for an 8.5 percent increase on a yearly basis. In the beginning of 2019, Russia's Gazprom had raised the price of gas to Moldova by 25 percent, and made it close to $240 per thousand cubic meters.