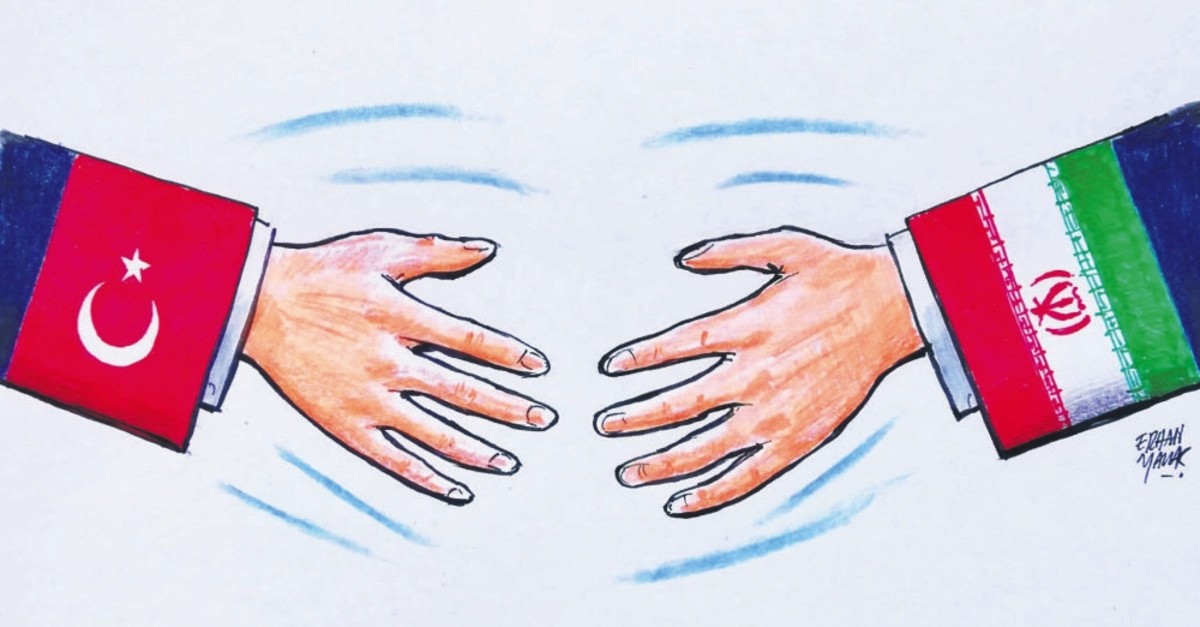 Turkish-Iranian relations have been competitive since the early sixth century, with the systematic expatriation of Turkic tribes toward Persian territory particularly increasing the interaction between Turkic and Persian people, which ultimately altered the nature of Persian culture and vice versa. Over time, this led to the emergence of a Turkic diaspora in Iran, which today makes up half of Iran's population.

Following numerous wars between the two dominant powers in the region, both sides abandoned their claims of achieving superiority over one another, substantially in military and cultural terms. In this regard, although pertaining to different religious sects, the Turkic-speaking Shiite population in Iran played a key role in preventing Turkey and Iran from taking military action against each other since the Treaty of Zuhab (or Qasr-I Shirin in Persian) was signed, defining a border between Iran and Turkey in 1639.

Therefore, it would not be wrong to claim that the complex nature of Turkish-Iranian relations includes contrasting features such as rivalry-cooperation, dispute resolution, and war and peace. These ebbs and flows in Turkish-Iranian relations have also been reflected in the policies of the post-Turkish declaration of the republic in 1923 and the post-Islamic Revolution in Iran era after 1979, which then turned into a regional rivalry between two different state ideologies – the religious revolutionary state of Iran versus the secular Republic of Turkey.

From competition to co-opetition

However, the implementation of Turkish Foreign Policy has visibly changed with the arrival of the Justice and Development Party (AK Party) to power in 2002. After years of isolating itself from the East, Turkey commenced its "active engagement" policy, by re-establishing its ties with the countries in the Middle East and Central Asia. As a result of this shifting axis in Turkish Foreign Policy, the economic and political relations with Iran visibly improved.

Although the historical co-opetitive (competitive-cooperation) nature of Turkish-Iranian relations have not yet changed; both countries are obligated to collaborate on many issues, both in internal and external affairs.

First, the political ambitions of the Kurdish minority brought Turkey and Iran to the same side to proceed with their cooperation both in Iraq and Syria. From the Iranian perspective, the prospects of a declaration of independence by Iraqi Kurds would diminish the influence of the Shiite population in Iraq, over whom Iran has traditional control.

From the Turkish perspective, the establishment of closer ties with Iran and Russia against the U.S.-backed PKK fractions in Syria is the only approach to prevent them from forming an independent state.

This reality forces Iran and Turkey to merge their powers as they share fears that any independence bid by neighboring Iraqi and Syrian formations could provoke similar secessionist demands at home.

For instance, although there is no joint anti-Kurdish military operation between the two countries in Syria, they continue to take a common stance and refused to recognize the Iraqi Kurdish referendum in 2017. Following this, a conditional rapprochement brought the Iranian chief of general staff, Maj. Gen. Mohammad Bagheri, to Ankara in August 2017, whose visit marked the first military summit between the Turkish and the Iranian officials since 1979. Accordingly, both countries have agreed to act together against any Kurdish bid for independence, including military operations, if necessary.

Second, concerns shared by both countries can be seen as an aftermath of the Gulf crisis. In this regard, it must be noted that these two prestigious civilizations have competed with each other for regional leadership in the Middle East throughout history.

Hence, exposing themselves as linguistic and ethnic groups distinct from those of the Arab nations, both countries share parallel strategies and ambitions toward shaping the region in their favor. In fact, it has always been Saudi Arabia and other antagonist Arab states that reaped the fruits of Turkish-Iranian competition.

Therefore, their political rapprochement now worries most of the Arab states for which Iran-led Shiite ideology and the Turkey-backed Muslim Brotherhood movement represent the utmost danger.

Therefore, the struggle to form a post "Arab Winter" regional order has alarmed both Turkey and Iran. This concern reached its peak with the outbreak of the Gulf crisis, which was interpreted by Iran and Turkey as a Western-orchestrated artificial crisis. Accordingly, as Galip Dalay argues, the Saudi-Emirati-Egyptian axis backed by Israel and the U.S., attempted to form a new regional order based on the philosophy of political Islam.

This axis has concerns about Turkey and Iran expanding their power; therefore, it prioritizes demonization of both countries. As this anti-Turkish and anti-Iranian block is detrimental to the interests of both countries, they naturally found themselves on the same side opposing the Saudi-led axis.

Apart from shared concerns, the two countries strive to enhance their economic relations. This particularly stems from international sanctions imposed on Iran, which have already crippled Iran`s economy and as such Iran embraced Turkey as a gateway to the rest of the world.

Likewise, following recent political crises between Turkey and its traditional Western allies, Turkey has gradually moved away from the West. This undoubtedly led to a radical shift of axis in Turkish foreign policy, particularly in terms of forming temporal, reluctant and skeptical alliances in political and economic spheres with its historic rivals such as Russia and Iran.

In fact, the agnostic nature of Turkish-Iranian relations and their long-standing distrust of each other have impeded both countries from meeting the designated political and economic goals so far. Although Turkey imports 20 percent of its gas and 30 percent of its oil needs from Iran, the trade volume between the two countries has fallen short of expectations in recent years.

The ultimate indicators have shown that the trade volume between the two countries stood behind $10 billion dollars, despite the expectations that this trade volume would surpass $30 billion in 2018.

In addition, there are other sociopolitical and economic interests overlapping between the two countries, which confine and obstruct the cooperation between Turkey and Iran. This limited cooperation is particularly evident in the aftermath of the Arab uprisings, as this period was clearly marked by diverging interests and conflicting ideological and religious perspectives between Turkey and Iran.

Take for example the Syrian crisis. Turkey is determined to overthrow the Shiite Bashar Assad regime, hence continues its support of the Syrian opposition, mostly Sunni groups; whereas Iran insists on preserving the status-quo. These conflicting and incompatible interpretations of what took place in Syria led tensions to climax in 2015 with Iranian leaders hurling insults and threats at Turkey, while President Recep Tayyip Erdoğan accused Iran of sectarian policies.

Today, the détente in Turkish-Iranian relations over Syria is mostly due to the fact that the ferocious and blood-soaked nature of the war in Syria has transformed into a frozen conflict.

In this regard, the worsening situation in Idlib stands as the most fragile issue between the two countries, as both sides insist on changing the existing conditions in their own favor. Notably, Idlib has become a crucial point in terms of imposing regional superiority for Tehran over Ankara and vice versa, in which Russia enjoys its "watchdog" and "referee" role.

Moreover, Idlib also revealed the overlapping geopolitical ambitions of both sides, which stand as the most evident obstacle toward establishing a genuine and strong alliance between the two countries. Therefore, it can be said that the Turkish-Iranian co-opetition will be witnessed further in Idlib, particularly in terms of whether it is a stable cooperation or another competition between the two sides.

Ultimately, the past and future of Iraq, post-U.S. invasion, is another problematic issue between Turkey and Iran. Ankara has long been concerned with the sectarian trend, or Shiite influence, in the Iraqi state.

The transition of power from the Sunni Baath regime to the Shiite Nouri al-Maliki government has marginalized the Sunni population in Iraq. Turkey could not turn a blind eye to this, and both countries have found themselves in another conflicting situation, in which Turkey sought to support the Sunni groups, whereas Iran undertook the role of "protector" of the Shiite population.

In fact, Tehran now also supports the Iraqi central government`s sectarian policies and the use of Shiite militias in the areas that have been cleared of Daesh.

As a result, the Iraqi government demanded Turkey withdraw its military forces and close down its military base in Bashiqa, in northern Iraq, which was established to help train Iraqi Sunnis from Mosul for the eventual liberation of the city from Daesh. This issue soon gained sectarian momentum, as Iran did not want the Sunnis to regain power by Turkish assistance and further demanded Turkey retreat from Iraq.

The triumph of realism

It is quite apparent that Iran has recently reactivated its intractable and aggressive foreign policy. Accordingly, over the past two weeks, Iran seized a Japanese oil tanker, shot down a U.S. military drone and threatened to capture U.K. trade and oil tankers in and around the Strait of Hormuz.

This raised serious questions among Turkish decision makers whether an ever-bellicose Iran, with the capacity for producing nuclear weapons, can be a credible and trustworthy ally.

For instance, declarations coming from Iranian top brass and high-level officials, particularly last Sunday, clearly indicate Iranian determination to not forgo their aspirations to exceed the uranium enrichment limit. Moreover, in obvious defiance of Israel and the West, they outline the fact that Iran will keep reducing its commitments in the Joint Comprehensive Plan of Action (JCPOA) nuclear agreement every 60 days unless the sanctions on Iran are lifted.

For Turkey, this created another grey zone and oscillation in its foreign policy, particularly regarding choosing a concrete side between the West or the de facto Russia-Iran union.

More specifically, when the Iranian sanctions were reinstated, U.S. senior policy adviser Brian Hook openly blackmailed others by threatening to implement further sanctions on those countries "who are engaging in sanctionable conduct."

On this specific matter, Foreign Affairs Minister Mevlüt Çavuşoğlu underlined that the U.S. has been waging a clandestine war to push Turkey to buy oil from Saudi Arabia and the United Arab Emirates (UAE), which he defined as inadmissible.

This established another stalemate for Turkish foreign and energy policy, partly because, as widely discussed above, energy-hungry Turkey is reluctant to diversify its oil exportation from hostile Arab countries. However, as of now, the Turkish side has only managed to condemn Washington over the reintroduction of Iranian sanctions and froze oil imports from Iran to comply with U.S. waiver requirements.

For Iran, it can be argued that their country is highly dependent on the Turkish consumption of gas due to the lack of infrastructure for refining gas. Specifically, Iran currently does not have the capacity to liquefy its gas, as international sanctions prevent the country from obtaining certain technology.

Apart from this, Iran also has further geopolitical and strategic plans, in particular in terms of bypassing the Strait of Hormuz and conveying its gas through the Mediterranean via Turkey. Therefore, Turkey stands as an indispensable partner that Iran cannot afford to lose.

Consequently, Turkish-Iranian relations do not promise stability, sustainability, continuity and genuineness. On the contrary, they include simultaneous contrasting features such as conditional cooperation on specific matters but rivalry and competition on other issues.

Therefore, the future of Turkish-Iranian relations seems dependent on the possibility of establishing a solid partnership that can overcome the negative perceptions related to ancient experiences. It could be argued that history is still a factor, and the mistrust continues between the two countries, periodically examining the potency of the Turkish-Iranian partnership.