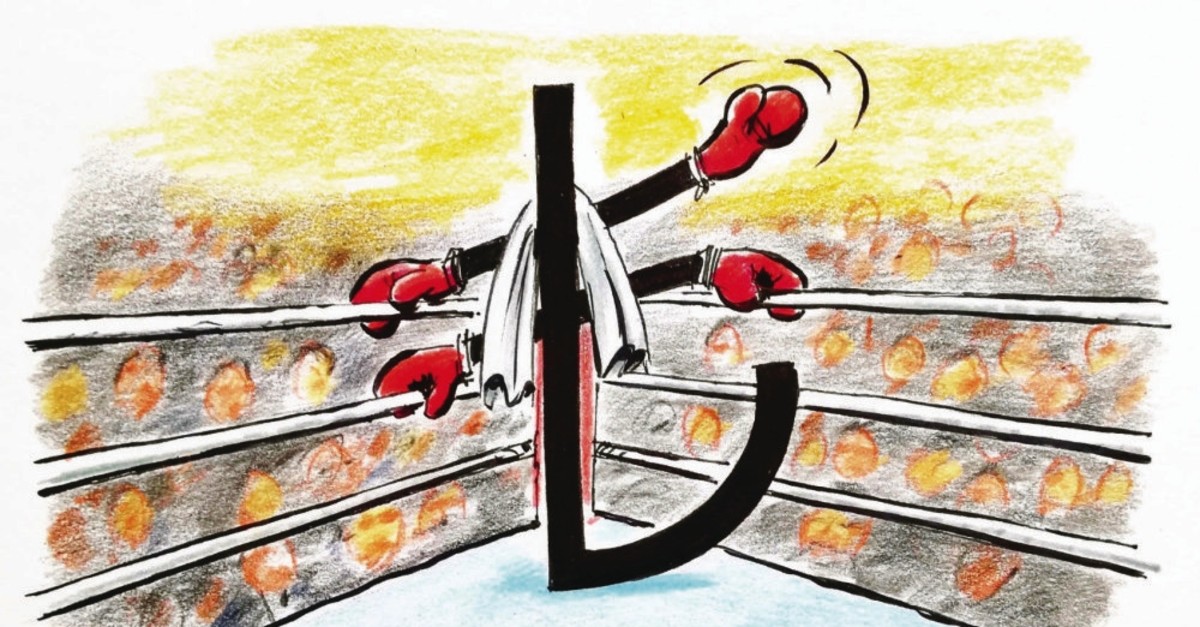 Turkey's central bank now has an unexpected opportunity and if the dollar exchange position that will arise from U.S.-China tensions is read properly, Turkey can launch its 5% to 7% growth trend in no time

An unprecedented opportunity for the Central Bank of the Republic of Turkey (CBRT) has appeared as the Turkish economy nears the end of one of the toughest financial and real sector storms it has faced.

The economic vulnerabilities, whose first warning signals became visible in 2016, became chronic in 2017 with the rise of production costs and reached a peak in 2018, have been fixed through a specific trend in the past 10 months. The fall in foreign reserves, which led to the rise in CDS (credit default swap) risks for Turkish bonds creating the ground for foreign rating agencies to lower Turkey's credit rating and the demand fiscal tightness causing global trade wars seems to have come to an end.

Seeing the first supporting examples of this in the rise in the consumer confidence index and heavy industry and services sectors in April, economists also found similar data figures in the following months. Likewise, the environment of confidence ensured by the gradual rise of the Turkish lira against the dollar, has also been supported with the decrease in agricultural inflation costs. Additionally, the 400 base point fall in the CDS risk, which reached the most stable period in the past two years, has led rating agencies like the Japan Rating Agency (JCR) to re-establish their recognition.

The Turkish lira, which negatively dissociated from its rivals South Africa, Poland, Russia and Asian countries before the dollar in 2018, has also been placed in the return-making instruments by some of the leading agencies of the market like QNB Finans Invest and Garanti Invest, thanks to its positive trend in the past three weeks. Likewise, it was noted that the support resistance of the TL/dollar parity is now priced at 5.70 or 5.72 levels, with the effect of the decline in policy interests, and will reach an even further positive dissociation after this is passed.

Foreign news outlets, which note that there is constructive data in Turkish bonds and wealth and not just in the lira, underline that the Turkish economy, which will go through an election-free period in the next four to five years, will dissociate from other countries with upcoming structural reforms. According to a story published on June 24 by BBC Turkey, the Turkish lira reached 5.71 against the U.S. dollar, recording the highest rise against the dollar among all currencies throughout the world by 1.8%.

The signals regarding the reduction in political risks caused by the S-400 crisis with the U.S. has been adopted by the market. Foreign-based economists underline that the Turkish economy, which gives the signal that the gains will continue, especially with the end of the elections in Istanbul. Timothy Ash, a strategist from the BlueBay Asset Management said that President Recep Tayyip Erdoğan's constructive remarks have instilled confidence in the market.

His remark was supported by Japanese Mizuho Bank's Tokyo-based emerging markets exchange expert Hironori Sannami. Noting that the Turkish lira will benefit from the atmosphere as investors generally buy high-interest emerging-market assets, Sannami said that things will work in Turkey's favor. From the European side, emerging markets strategist at Rabobank, Piotr Matys, told Bloomberg that the exchange rate will fall back as far as 5.50 if outside conditions are favorable.

Iş Investment's statement saying "Turkey, which will focus on the economy and reform process until the 2023 presidential elections, can become a center of attraction for the global capital again if it is able to resolve the tensions with the U.S. regarding the purchase of S-400 missile defense systems [from Russia]" supports the potential I have been trying to explain.

As it is seen, the global and local players which have been portraying nothing but a gray and black picture in the past year, have taken a position for the Turkish lira and lira assets. I anticipate that the foreign currency input in the country will triple compared to the same period last year, with the addition of banking and special funds in the portfolios of traders in London. In this regard, it is possible that the Turkish lira will take a rallying position if confidence is established about not having snap elections and the implementation of structural reforms.

Let us see what the CBRT has done in the past year in light of all this information and will deduce from the market's current situation. The CBRT administration, which has especially supported strong liquidity and low-risk credit volume in the September 2018 to April 2019 period, when the tightening policy was fully felt, did not allow the interest corridor in June by not making a compromise from these strategies in June. How much this situation, which looks like a warning to the markets about the lira's ongoing volatility, will affect the negative contribution to Turkey's growth projections, will only be revealed by time. I think it will not be right for both manufacturers and large sector players – whose stocks regarding the procurement of raw materials are melted – to make moves based on foreign markets in a period when capital is so costly.

We have mentioned dozens of times that the U.S. Federal Reserve has been making a mistake in its interest decisions. I do not even need to mention how much danger the rumors about the U.S. attempting to revive its economy by devaluing its currency pose to world trade.

The CBRT needs to leave aside foreign policy and risks and immediately support an interest policy that is real-sector friendly. We all see how much damage financial markets not based on production cause to emerging economies. As someone who has been fully supporting the central bank's interest corridor for the past three years, I think it is about time that they loosen the valves. We need to remind readers that each country that acts extra cautiously will suffer the costs in some way.

The CBRT has an unexpected opportunity and if the dollarization position that will arise from the U.S.-China tension is read properly, Turkey can take off in its 5% to 7% growth trend in no time.