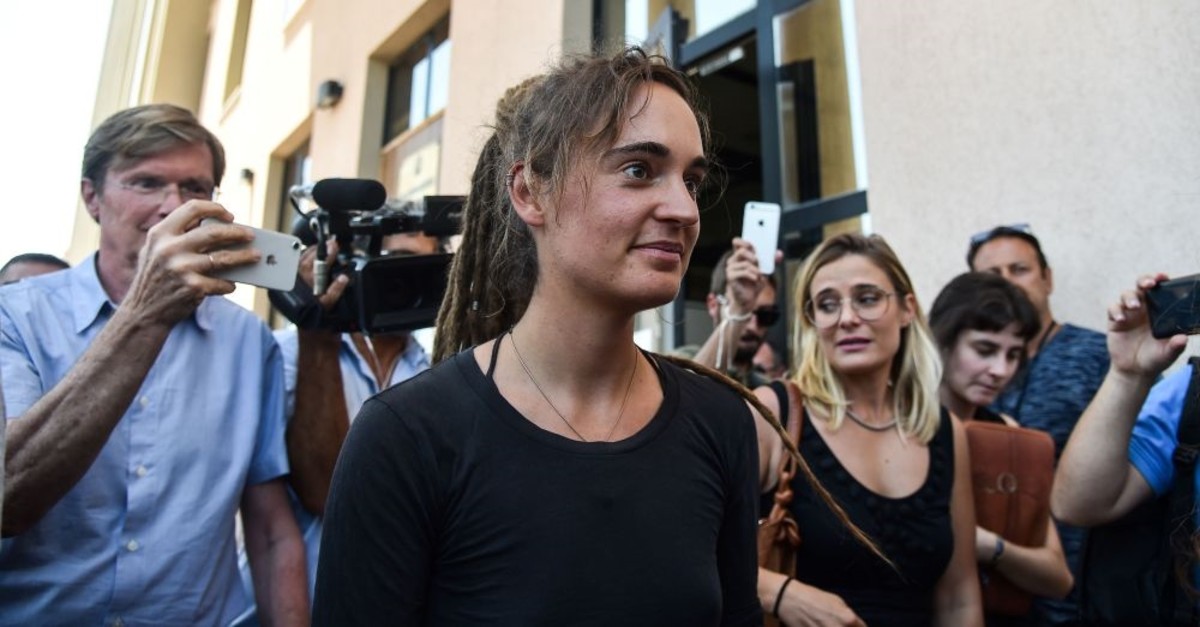 German captain of the Sea-Watch 3 Carola Rackete (C), who sparked international headlines by forcibly docking at an Italian port with rescued migrants, leaves the courthouse of the southern Sicilian town of Agrigento
by Valeria Gianotta Jul 26, 2019 1:05 am

In Italy, the case of Carola Rackete, the captain of the nongovernmental organization (NGO) Sea-Watch 3 ship that forced the naval blockade on the island of Lampedusa to rescue migrants, is polarizing public opinion, while the city of Paris has announced that it will assign her the Grand Vermeil medal as "support for women and men who work to save migrants on a daily basis."

Rackete will be decorated with a medal, and 100,000 euros ($111,425) will go to the NGO in support of "a new sea rescue campaign for migrants, despite numerous legal impediments. Associations like Mediterranean NGOs and Sea-Watch honor us and force us to face the inertia of European governments," Patrick Klugman, the deputy to the mayor of Paris responsible for international relations, stated.

Italy reacted to this statement with Interior Minister Matteo Salvini saying: "French hypocrisy (…). The French lined up with an NGO that made politics in Italy and with a person who rammed a patrol boat, putting at risk the lives of the Italian soldiers."

Despite any speculation or fanatic enthusiasm, Rackete embodies one of the most critical issues for Italy and the whole Mediterranean region. By having forced a naval blockade on Lampedusa and having landed 41 migrants who were on board the Sea-Watch 3 ship after more than two weeks off the Italian coast, the captain was arrested at the end of June upon the accusation of aiding illegal immigration. She was released by order of the prosecutor of Agrigento.

In this dispute, which heats up spirits as if it is a sports competition, the crucial immigration issue is open to different interpretations. Indeed, on the one hand, forcing the blockade and ramming patrol boats of the coast guard is a matter strictly related to national laws and sovereignty, while on the other hand, it is essentially seen as the subject of humanitarian ethics.

In other words, as immigration is the main file of current Italian politics, everything revolves around Salvini and his anti-immigrant positions.

According to many, Salvini enhances hate messages, while for many nationalists he is acting in the national interest of Italy, a country greatly exposed to migratory flows from the Mediterranean. In terms of people arriving by sea from the MENA (Mediterranean and North Africa) region , Italy is one of the leading countries in Europe; thus, domestically the fight against immigration has become a key issue.

Furthermore, recent data reveals that some neighboring countries such as Germany, Austria and France used to send back to Italy a number of migrants higher than those that arrived directly to its territory.

Due to this emergency, some restrictive policies have been adopted and a harsh, populist rhetoric started becoming the leitmotiv in the Italian political arena. In his social media profiles, Salvini defines Rackete as an "outlaw," "delinquent," author of a "criminal" act, responsible for attempted murder because she "tried to kill five Italian soldiers" and an "accomplice of the traffickers of human beings." And from these affirmations the young captain has built her own defense, denouncing the minister's statements as defamation and an instigation to commit crimes. Furthermore, there was a formal request for an EU intervention to welcome all refugees in Libya.

Despite her legitimate positions, Rackete remains under investigation for aiding and abetting, as well as for the crimes of refusing to obey warships, resistance or violence against warships and navigating in a prohibited area, while Minister Salvini will have to answer for the accusations against him, which are not the first ones since he has held ministerial office.

However the case ends, the long-standing question concerning application of effective measures acceptable to all parties will remain open.

Indeed, to what extent are the political reasons of state compatible with moral ethics? And to what extent can politicians behave differently from common morals?

In this case, it is clear that ethical issues may be particularly thorny in a frame of sovereign laws and national interest; thus, state ethics and moral ethics seems destined to remain divided for quite a long time.