Is this Britain's 'Donald Trump moment?' 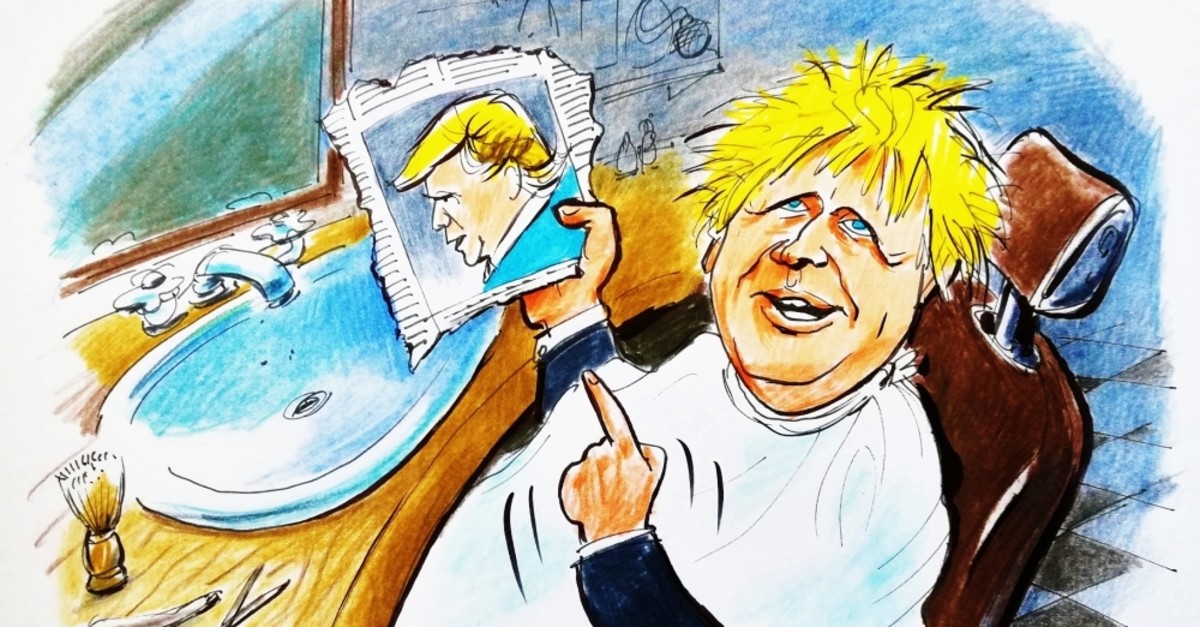 Prime Minister Boris Johnson is going to shape the future of the U.K. in the near term. Will this take long? Is he capable of achieving a ‘no-deal' Brexit? Finding answers to these questions is no easy task

Who would have thought that Alexander Boris de Pfeffel Johnson, or just plain old Boris Johnson, would become prime minister of the U.K. Perhaps not the "world king" that he predicted as a child, but nonetheless wielding all the levers of power in one of the most powerful nations on earth.

This is just two years after a farcical bid for the top job following a tumultuous referendum where the British decided by the slimmest of margins to leave the European Union – a referendum in which Johnson was instrumental, riding the wave of racism and xenophobia that has characterized Western political discourse in recent years with his promises of curtailing immigration and whipping up fears of Turkish EU membership.

He also promised huge amounts of money for public services which would come as a dividend for not paying EU membership fees, failing to mention that much of these were recovered in grants and rebates while the rest was for ensuring tariff-free access to the world's largest single market. All lies and exaggerations of course, but in an era where memories last barely longer than the last tweet or Instagram post, it did the trick.

Having tricked and deceived his way to success in the referendum, it made sense to seize the moment and go for the ultimate prize, but that bid for power failed due to Michael Gove, hitherto his ally and partner in crime in the referendum campaign, claiming in a rare moment of honesty and in a twist worthy of Shakespeare that he "cannot provide the leadership or build the team for the task ahead." Such a knifing would have ended the political ambitions of most politicians, but not Johnson, and not in these extraordinary times.

The moment is coming

Some political commentators have stated that by voting to leave the EU, the U.K. had its "Donald Trump moment" even before the U.S. did, but it seems like the U.K. was not content with its one slice of bacon and it is now going for the whole hog, so to speak.

So, the U.K. now has, by process of selection rather than election, a prime minister whose previous political incarnation as mayor of London was littered with controversy and debacle. He has described black Africans as "piccaninnies" with "watermelon smiles," has lamented Britain's relinquishing of its colonies, has described the burka as oppressive and described Muslim women who wear the niqab as resembling bank robbers and letterboxes.

He has also reserved some of his most toxic comments for the Turkish people and their president. But perhaps we should reserve some sympathy for him bearing in mind that he is the great-grandson of an eminent Ottoman Islamic scholar and journalist that served his government and people with great distinction, and Johnson, being Eton-educated and reliant upon on the votes of an overwhelmingly white and aged membership of the Conservative Party and the Unionist Party, would no doubt have had to prove his loyalty to their cause beyond any shadow of a doubt.

Johnson's ascension to power is horrific news then for every type of minority, and especially Muslims, but aside from vitriolic rhetoric, what can we expect from his premiership?

The U.K. is in a serious political and economic bind due to the uncertainty following the referendum result which he was so influential in achieving. If history is an indicator then like many other populist leaders who seek to restore their country's fortunes after a period of inexorable decline, Johnson will probably be high on rhetoric and gimmicks but short on real solutions.

Perhaps a quick dash to Washington for the obligatory photos with President Donald Trump and talk of another huge yet bogus trade deal would be very convenient at a time when Trump himself has been singing the praises of Johnson right after Johnson refused to stand up for Sir Kim Darroch, Britain's ambassador in Washington, who had made less than flattering statements about Trump's leadership qualities. This will fuel the fear that rather than the vassal state of the EU that Johnson once warned Britain could become, it will become a very real version of the caricatured poodle of the U.S. it has become famous for in recent years.

Political beast in a radical era

Domestically, the impasse in Parliament which meant that Theresa May was unable to deliver any type of Brexit deal will continue, forcing Johnson to call a general election in the hope that a new Parliament will deliver the majority he requires to exit the EU with a deal, or no deal, of his choosing. This was, of course, exactly the same idea that Theresa May had before him, but Johnson is a very different type of political beast to May.

His ability to overcome the odds should not be doubted, especially when we are in a new era in political history where the postwar consensus that forced both major political parties to have a broad membership and return to the center-ground of politics in order to win a majority in Parliament is over. In an era of powerful soundbites and strong personalities, and with Johnson being ever prepared to go lower than his opponents in order to attain what he wants, this could be his time.

As interesting a character as Johnson is, and while historians may remain enthralled by the types of leaders that lead their nations to destruction following tumultuous events, it should not be forgotten that such characters remain mere individuals, and these individuals are themselves enabled by events, very often political or economic, that are the real drivers of change – change sometimes so profound that it breaks all previous notions of consensus and the very way people think.

Going back in history, we should not forget that it was the political and economic turmoil that followed World War I, and in particular the Treaty of Versailles and the Great Depression followed by German Chancellor Heinrich Brüning's austerity measures that fueled the rise of many small extremist groups, which in turn led to a huge increase in the share of the vote for the Nazi party. The suffering due to austerity radicalized the German electorate who then cried out for a strongman to fix the problem, and the rest is well known. Similarly, Boris Johnson becomes prime minister at a time when the U.K. has recently lost two major wars and following on from the worst financial crisis since that Great Depression.

Living standards have plummeted and politicians, ever keen to divert attention from the real problems, are only too pleased to play the racism and xenophobia card, distracting people from the fact that it was their wars and their economic policies that caused the very economic misery and refugee crises which people are up in arms about. Membership of the EU was an early casualty but a lot more may follow.

Will Boris last? Well, he is a battler and survivor as much as he is a chancer, and people said about his compadre Donald Trump that he would never become president and then when he did that he would be out of office in a flash. Yet three years on, it looks very much like he will be a two-term president. With Johnson we know that beneath the buffoonery and the bluster lies a very manipulative and tactically aware man. We would write him off at our peril.

And finally, for the high-minded who prefer to talk about ideas rather than individuals, perhaps it is a better idea to look closely at what it is that has led us to the point where there is the very real prospect of such individuals attaining power and having control over the fates of hundreds of millions of lives. Perhaps finding and addressing these root causes would be a good place to start.