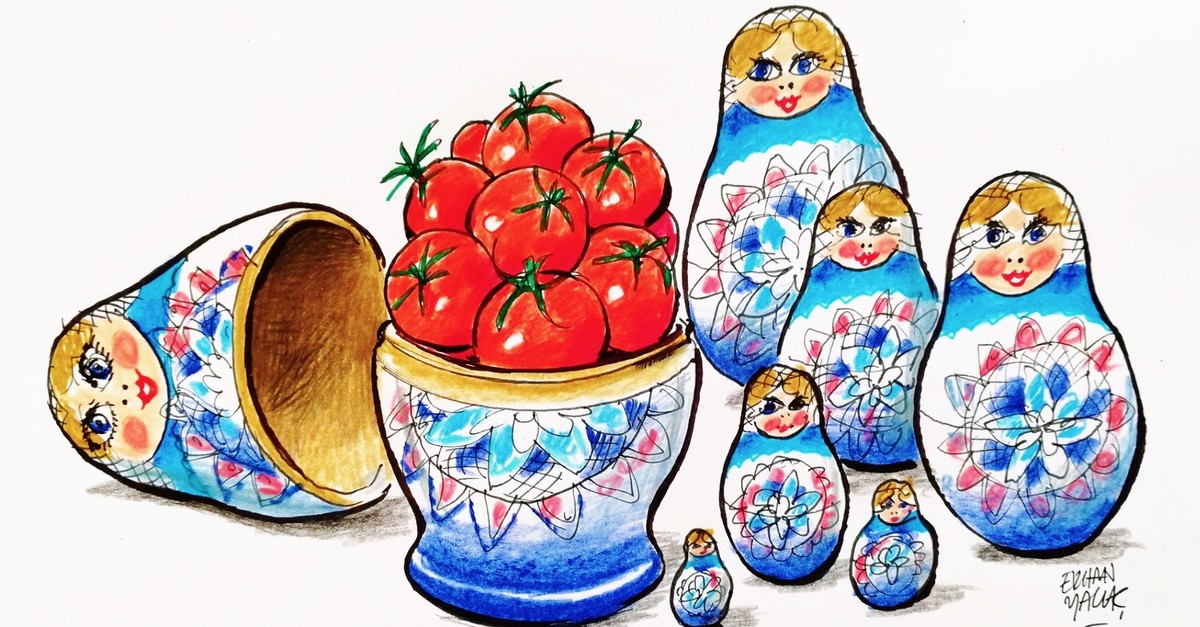 Short-term improvements in Turkey and Russia's relationship, particularly in energy, construction and defense, may turn into a long-term model through sustaining mutual efforts on the ground

Today, the headlines are dominated by the delivery of the Russian-made S-400 missile systems to Turkey to protect its airspace. It's a benchmark development and its global impact still waits for us to witness. As for Turkey-Russia relations, one thing is clear: They've reached the level of cooperation never experienced before and with prospects of further progress.

During the past decade and a half, Turkey-Russia relations have gained steady momentum and have started to intensely develop after the November 2015 jet crisis was amicably resolved a year later. Today they are enriched with sophisticated instruments of cooperation, military technology and a trilateral mechanism on a peace settlement in Syria whose regular round of talks took place last week in Nursultan, Kazakhstan.

Growing cooperation in energy, trade, tourism and culture is a prime mover of Turkey and Russia's progressing interactions. Their main vehicle, the Intergovernmental Commission on Trade and Economic Cooperation, held its 16th session on July 24-26 in Antalya, Turkey. It "plays a big role in organizing our economic cooperation," mentioned President Vladimir Putin, "helps to develop direct contacts between entrepreneurs of the two countries, including those representing small and medium-sized businesses."

Geographic neighborhood implies close relations while far from always good and fiduciary, and this is what Turkey-Russia relations are about. In the course of their 500 years of shared history, the countries witnessed intervention and hostility, rapprochement and friendship that have jointly produced today an exclusive model of cooperation.

Trade has always been at its core, and in natural gas particularly. Lasting from the 1980's, Turkey-Russia gas cooperation is special; it's immune to political squabbles around the Russian gas monopoly and is guided by economic necessities.

Turkey is the second-largest Russian pipeline gas consumer and its economy relies on it by up to 60%, which makes diversification of gas supply sources a hot item on the Turkish agenda. The Turkish pipeline gas imports continue growing through higher contracted deliveries from Azerbaijan and Iran in parallel with an increase in volumes of Russian gas imports. In the meantime, Turkey decreases its dependence on pipeline gas by importing higher liquefied natural gas (LNG) volumes that went up to about 20% in 2018 while the pipeline gas overall share of imports has decreased to 80%.

A benchmark of Turkey-Russia cooperation in the field of natural gas became the countries' October 2016 agreement on construction of the transit-free TurkStream pipeline. The agreement is a joint product of the countries' sovereign ambitions and economic necessities. For Russia, it paves the way for further building a southern export corridor to Europe, while to Turkey, it's an instrument to help it become a regional energy hub.

Moreover, TurkStream may well add to Turkey-Russia relations of seller and buyer a capacity of joint providers of pipeline gas to third markets. This is prone to change the nature of the established Turkey-Russia interaction in the gas field and trigger respective modifications in line with the evolving realities. Composed of two lines of equal capacity (15.75 billion cubic meters each), TurkStream will supply the Turkish consumer with additional volumes of Russian gas, while in parallel providing for its eventual delivery to southern and central Europe.

"Gas pipelines are built not for making someone angry, but out of economic necessity," said Austrian Foreign Minister Karin Kneissl, when in Moscow this March, revealing once again the truth that for a foreseeable future, Russian pipeline gas will remain an indispensable energy resource.

Recently, the Turkey-Russia cooperation in energy has acquired a new dimension by expanding to the nuclear sector. Currently, Russia's Rosatom is engaged in the building of Akkuyu near Mersin, Turkey's first nuclear power plant (NPP) to have four energy units of total capacity of 4,800 megawatts. The venture marks a launch of the nuclear power sector in Turkey, virtually a new venue for the country's energy development. The NPP's first block is to be commissioned in 2023, by the centenary of the Republic of Turkey, and the facility will meet 10% of Turkey's energy demand.

Economy: A pillar of stability

Mutually beneficial economic ventures build pillars for relationship stability, and Turkey-Russia cooperation is an example. Besides the energy sector, the construction industry is another field of intense interaction.

Since the 1990s, Turkish contractors are actively engaged with sophisticated and high-profile construction projects in Russia including those for the Sochi Olympics and the 2018 FIFA World Cup. Those implemented in recent years only amount to $70 billion in value.

Trade, finance and investment are the areas of Turkey-Russia interaction gaining current momentum. In 2018, trade increased by 16% to reach almost $26 billion, while mutual investments went up to $20 billion.

In April 2019, Russia's Direct Investment Fund and Turkey's Sovereign Wealth Fund signed an agreement on a $1 billion investment platform to facilitate implementation of their joint projects. "I believe," commented President Putin that, "with such investment capital our business communities will be able to raise at least $5 billion for miscellaneous projects."

Joint initiatives in the real economy buttress grounds for cooperation to ensure regional security, and to build peace in Syria particularly. While "our approach to certain developments may differ," Putin said in December 2014, "we clearly share a desire to resolve acute global conflicts."

Turkish and Russian leaders are actively engaged in personal communication on pressing matters. "Our intense dialogue is evidence of productive partnership in bilateral and regional matters," President Recep Tayyip Erdoğan said in December 2017, adding that "our consent on political issues positively affects cooperation in trade, tourism and energy."

Under the Astana process, launched in 2017, Turkey and Russia along with Iran have assumed the guarantors' role for peace settlement in Syria.

In September 2018, to prevent a coming humanitarian disaster in Idlib, Turkey and Russia stepped in and reached the Sochi agreement that envisaged a demilitarized zone of 15-20 kilometers between the warring parties and evacuation of heavy weapons and radical groups.

Nevertheless today, nearly a year later, the situation in Idlib remains unresolved and provisions of the September 2018 agreement are not fully fulfilled. Turkey is stalled in effort to dissolve Hayat Tahrir al-Sham (HTS), by now in full control of the rebel stronghold, and tries to prevent the Syrian regime military advance northwards. Since April and in breach of a cease-fire, the regime's bombardment of northern Hama and southern Idlib has become regular, while the Russian airstrikes over terror strongholds have intensified in parallel. If continued, the hostilities may well prompt a new refugee influx and result in the worst possible humanitarian catastrophe in overcrowded Idlib.

Still, and regardless, the Turkey-Russia agreement on Idlib remains standing as an instrument for offensive containment to prevent a humanitarian disaster. Furthermore, the countries' leaders reaffirm their belief in the necessity to preserve the sovereignty, independence and territorial integrity of Syria while considering unacceptable its division into the zones of influence.

"In order to prevent the regime's massacres in Idlib, like it has already done in various provinces, we've come up with a trilateral structure with Russia and Iran. Through cooperation with Russia on the ground, we've achieved stability in Idlib", said President Erdoğan on July 14, "although the regime continues to violate the cease-fire, we continue to have unity with Russia over providing security in Idlib."

Accordingly, the Astana process guarantors brokered a new cease-fire agreement between the Syrian regime and the opposition forces on Aug. 1-2 in Nursultan that has the potential to save the overcrowded Idlib demilitarized zone from the looming humanitarian catastrophe.

Turkey-Russia relations are multifaceted and continue evolving in a volatile environment. Better knowing each other and each other's history and culture is indispensable for the people of Turkey and Russia for the benefit of building lasting trust and mutual respect between their countries. Ties in science, education, literature and the arts, and tourism have always helped to promote understanding between them.

"A high level of tourist exchanges is typical of Russian-Turkish relations," believes President Putin. Turkey is getting more popular with Russian tourists, and on top of the world-famed Turkish resorts they come to visit its numerous historical and cultural landmarks as well. In 2018, Russia, with 6 million tourists, ranked first again in terms of the number of visitors to Turkey.

The countries' leaders attach high importance to developing humanitarian contacts. This year was announced as the Year of Culture and Tourism of Russia and Turkey that was officially launched in April by performance of the Turkish "Troya" opera on the stage of the Bolshoi Theatre in Moscow. In turn, the famed Moscow Virtuosi orchestra, conducted by Vladimir Spivakov staged a performance in Antalya in May.