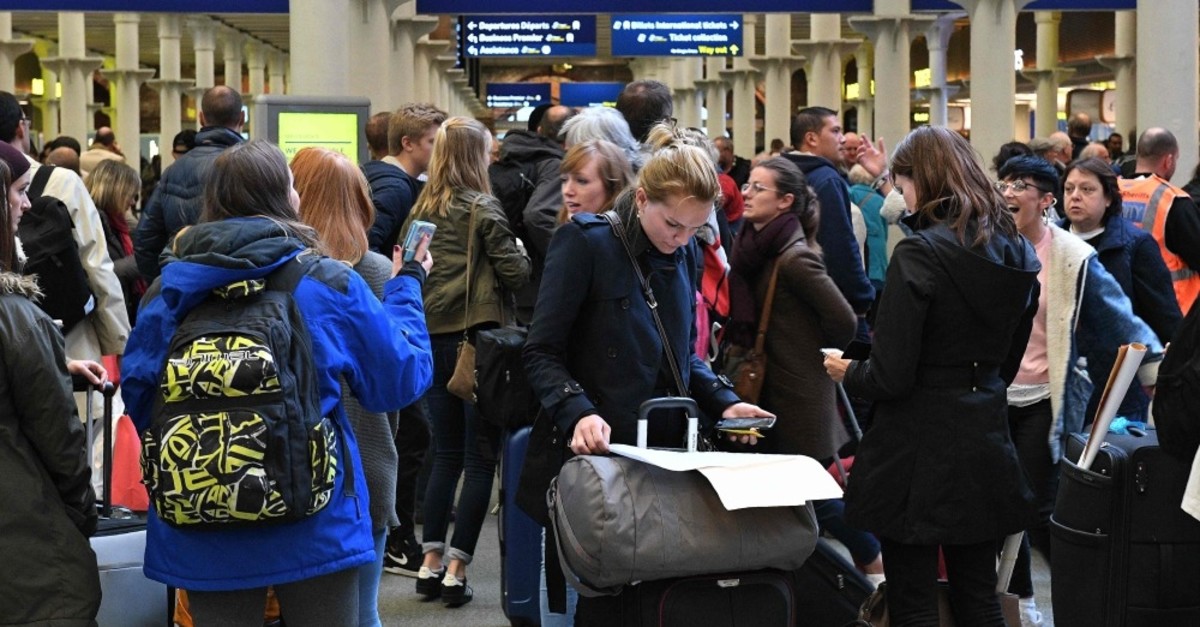 Passengers wait near the International departures area at the Eurostar terminal at the London St. Pancras train station, Oct. 18, 2019.
by Jurgens Klaus Aug 20, 2019 12:08 am

As of late, there has not been a dull day in British politics. By the time this article was penned, the Brexit clock stood at 80 days and eight hours hence no chance to sit idle. As if the uncertainty about how the colossal task of leaving the European Union will actually be delivered would not produce enough food for thought another issue has made it to the commentator's pole position: What is on everyone's mind is whether Prime Minister Boris Johnson himself will decide to risk an early general election or whether he will be forced to do so by losing a vote of no confidence in Parliament; also, what would the date be?

Initially it was assumed that Johnson would first deliver Brexit and then head to the ballot box as opinion surveys published shortly after he became prime minister indicated his Conservative Party could come out on top as the winner. Interestingly enough questions asked included both scenarios: A structured exit from the EU or what is called a "hard exit." Thus written, one has to attest that the majority of the British public simply wants to get on with it no matter how. Now and some weeks into his time in office another possibility has been floated: What if those polls forecast Johnson's party could significantly increase its share of the vote even before Oct. 31, the magic leaving date?

But the ball is far from only in Johnson's court. Those who are in favor of remaining in the EU could trigger a vote of no confidence in Parliament. Should that pass and regardless of whether there is a caretaker minority government managed by the opposition or whether Johnson himself stays temporarily in office, would thus lead to early general elections unless a new opposition politician prime minister would be able to have the backing of a majority in Parliament, which is highly unlikely.

We are talking about billions, not millions of pound sterling: Johnson has announced huge public investments and in particular so into the ailing National Health Service (NHS). Only yesterday it had been revealed that on average patients would need to wait two weeks before an appointment with their doctor could be made, so there is a lot of homework waiting to keep the electorate happy.

Then there is word of harsher sentencing for those who have committed a crime as well as increasing the number of prisons. Thousands of additional police officers shall be hired to make the streets safer.

Law and order, and health – observers might just think that these are perfect topics to kick-start a general election campaign. It might very well distract the electorate's scrutiny from how the prime minister aims to deliver Brexit. Currently the government would have access to those enormous sums even without raising taxes which would, of course, negate any positive outcome originally intended, as higher taxes are a vote loser by definition.

But whether the public would really buy into it is an altogether different matter.

Let us first focus on the "twice early" scenario. Twice early because not simply a snap vote sometime before the end of the year probably in November but twice early as in taking place even before Brexit!

Legally Johnson needs six weeks to pull that plan off if the vote should precede Oct. 31, hence a Thursday in mid to late of that same month is still possible. What might make Johnson pause for a moment are two of his most recent predecessor's decisions.

First, David Cameron gambled his very own political future by calling a referendum about EU membership in 2016 which he lost, and second, a year thereafter Theresa May opted for a snap poll which saw her majority in Parliament decrease instead of going up so that per result a minority government with the support of the Democratic Unionist Party (DUP) became the only option in order to stay in power. In both cases, a majority of pollsters would have argued the other way around.

Johnson is faced by the same dilemma: Trust your own instincts and ignore whatever outcome is predicted, or only rely on the constant stream of pre-vote opinion surveys? And what happens if he loses and someone else becomes prime minister? Could Brexit be postponed or Article 50 completely revoked? Could "remainers" gain the upper hand in Parliament?

Second, there is the alternative option: Get Brexit done with and head to the electorate straight thereafter but stay on as pre-Brexit prime minister who would then enter the history books as the very same post-Brexit prime minister who managed to get Brexit through in the first place. This latter possibility of course only makes sense once he is certain that the U.K. will be leaving the EU on Oct. 31 come what may.

Or both perhaps! With the arrival of Dominic Cummings in Johnson's inner circle it has become a fact that one of the masterminds behind the "leave" campaign now not only has access to the PM but will influence his policy-making decisions to a great extent. Whereas the previous government under Theresa May would always favor a structured deal with Brussels and thus almost completely neglected any serious no-deal Brexit preparations, now the tide has turned. Johnson still thinks a deal with the EU should materialize but has drastically stepped up no-deal preparations, too.

What in all likelihood is going to be the decisive factor in all the potential scenarios discussed in this article is the role of Parliament. Can Johnson unite his very own party plus the DUP which together hold a wafer-thin majority for the case that there will be a last-minute deal with Brussels? Would Parliament finally say "yes?"

Alternatively if there is no agreement with the EU and a hard exit seems probable would he manage to cling on to power beyond Oct. 31 without losing a vote of no confidence in Parliament; would all of his party and the DUP back Johnson?

Which brings us back to the gist of this piece: The only logical reason for going to the polls early and even before Brexit is to get a better majority in Parliament, perhaps even a single-party majority back on track.

David Cameron gambled his personal political career on a referendum and lost. Boris Johnson might gamble his career as prime minister by going to the polls early and actually losing big time, too, thus allowing the opposition to come to power probably shelving Brexit, at least for the time being; asking the EU for another extension.

Dominic Cummings and his advice is thus the major factor. If he is certain the British public will accept a no-deal or a structured deal as long as Brexit happens on Oct. 31 he might suggest letting the public give us that extra (seats in Parliament) backing. If there is any doubt about that, a pre-Brexit general election is off the table.

Whilst the Brexit clock continues to tick and will soon reach the 70 days seven hours mark, one thing if any is certain: Never a dull day in British politics indeed!