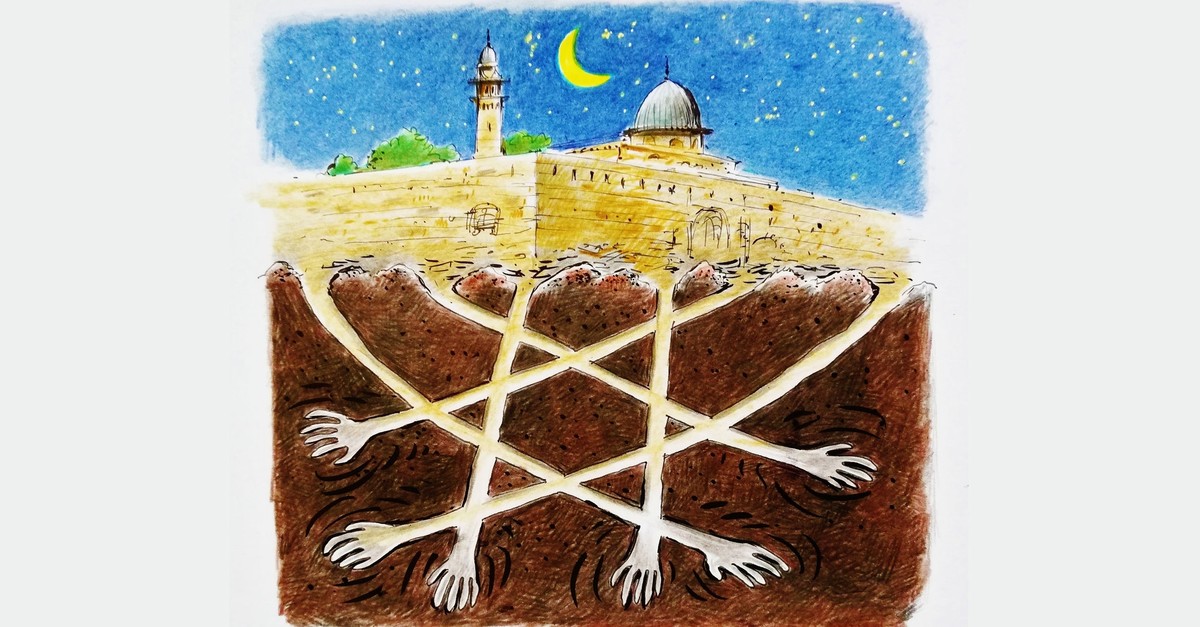 Fifty years after the burning of Al-Aqsa Mosque, an escalating Israeli policy of targeting the mosque has been crystallizing only to be countered with a deteriorating Arab stance which seems to be embracing the normalization of relations with Israel at the expense of the Palestinian issue.

Apparently, the Israeli occupation has achieved major steps in its attempt to Judaize Al-Aqsa, benefiting from the absence of a serious Arab position, and from an environment marketing Israel, now more overtly, as a friend and ally.

The historic status quo in Al-Aqsa is defined as the terms prevalent since the Ottoman rule until 1967 whereby the Islamic Endowment (Waqf) managed the entirety of the mosque. However, Israel's attempts to change the historic status quo have not stopped since the 1967 occupation, accompanied by its efforts to enforce the modifications it has introduced, especially after Al-Aqsa Intifada.

On June 7, 1967, Israeli troops broke into the Al-Aqsa Mosque, announcing their victory and declaring that the "Temple Mount is now in our hands." Subsequently, Israel attempted to place the mosque under the control of the Ministry of Religious Affairs; however, the Islamic Endowment refused and forced then-Army Minister Moshe Dayan to maintain the status quo by which only Muslims pray in the mosque whereas non-Muslims could visit the mosque after buying tickets from the Islamic Endowment.

This was made more possible as the rabbinical establishment held to Jewish religious law, which prevents Jews from entering the site given that they are "defiled by contact with the dead." Even more so, the Israeli Supreme Court supported the government's position as it upheld Jews' "right" to pray in Al-Aqsa but restrained that "right" with the need to maintain order and public security.

Following the break out of the Al-Aqsa Intifada in 2000, the Israeli Occupation Authorities (IOA) completely banned non-Muslims from entering the Mosque. This situation remained intact until 2003, when then-Public Security Minister Tzachi Hanegbi allowed the resumption of settlers' break-ins.

Simultaneously, the number of rabbis supporting Jewish visits to the mosque was increasing, and more verdicts were issued by Israeli courts supporting Jews' "right" to pray at Al-Aqsa. Still, Israeli police would not allow Jews to pray on the site, at least not openly, for fear that going to an extreme might have security reverberations. Parallel to the increasing break-ins and pressure by Temple organizations, attempts were pursued in the Knesset to make a major breakthrough that would ultimately lead to allowing Jewish prayer in Al-Aqsa. Thus, from 2012 to 2015, Knesset members – mainly from the right and sometimes from the so-called left – advanced and supported different bills suggesting the temporal division of Al-Aqsa between Muslims and Jews, ending Jordanian control over the mosque and putting it under full Israeli sovereignty, and allowing Jews to pray on the site.

In addition, seminars were held in the Knesset in support of the settlers' claims to Al-Aqsa, including a conference held in December 2017, which called on Israel's chief rabbinate to reconsider its stance regarding the mosque.

Reckoning the route via the Knesset or courts of law was not leading to the sought results, the IOA shifted to a new strategy tailored to diminish Muslim presence in Al-Aqsa. Coming to the conclusion that Muslim worshipers and sentinels (Murabitoun and Murabitat) were a major hurdle preventing the occupation from completely executing its schemes and plans, an orchestrated campaign started to dismantle this human shield defending the mosque against Israeli infringements.

To this end, then-Army Minister Moshe Yaalon issued a decision on Sept. 8, 2015 outlawing what it called Murabitoun and Murabitat groups as they were "undermining Israel's sovereignty on [the mosque]," according to a statement by Yaalon's office.

In the same vein, Israeli Prime Minister Office distributed a press release on Nov. 17, 2015 that said the security cabinet has declared the Islamic Movement-Northern Branch as "an illegal organization," a decision which would ultimately undermine the movement's role in organizing visits to the mosque from the Palestinian territories occupied in 1948.

Prior to these two decisions, particularly in August 2015, Israeli police issued a list with the names of 20 Palestinian women prevented from entering Al-Aqsa and on Sept. 3, 2015, a list with 40 names was distributed based on claims that the blacklisted women were causing chaos in Al-Aqsa. The IOA has banished some of these women from the mosque and prevented others from entering Jerusalem or its Old City.

In addition, Israel prosecuted some Palestinians for affiliation with an "illegal group," referring to the Islamic Movement, given their involvement in activities aiming at defending Al-Aqsa.

Besides this line of aggression, Israel continues to impose age, categorical and geographic restrictions on Palestinians, thus preventing them from reaching Al-Aqsa and constricting their right to pray there to a number of permits it issues to make their influx to the mosque narrow, difficult and limited. This Ramadan, for example, Israeli restrictions included preventing men under 40 from entering Jerusalem without a permit from the IOA, taking into consideration that permit applications might be rejected for no given reason.

As Israeli aggression on Al-Aqsa continues and escalates, there seems to be growing Arab negligence of the situation as can be seen in the increasing marketing of normalization, calls for "historic reconciliation" with Israel and, worst of all, readiness by some countries to pave the way for the "peace plan" promoted by the current U.S. administration and aiming to liquidate the Palestinian issue.

It is true that Israel's aggression on Al-Aqsa and its attempts to impose its rules to replace the historic status quo have been recently driven by different internal factors, including the rising influence of Temple activists and supporters.

Yet, it is equally true that this trend is being nourished by the deteriorating Arab stance and the failure to embrace a strong position that would curb Israeli policies targeting the mosque. As the scene in the region unfolds, Arab governments seem to be stepping further away from Al-Aqsa, and from the whole Palestinian issue, to redefine the foe and the friend in a way which can by no means defend or restore Palestinian rights usurped by the occupation.

An eye resisting the awl

As the Arab official stance boils down to a point where it cannot stop Israeli aggression against Al-Aqsa, major responsibility has been taken by the street, particularly by Jerusalemites and the 1948 Palestinians. This was demonstrated in the Bab al-Asbat uprising in July 2017 when Palestinians foiled Israeli attempts to introduce further changes to the historic status quo and forced the IOA to remove metal detectors placed at Al-Aqsa's gates under security claims. It was also shown in February 2019 when Palestinians opened Bab al-Rahma and managed to restore the status quo in the building, which had been closed by the IOA since 2003.

As sands in the region are shifting and stances are shuffling, it remains important to reiterate that threats to Al-Aqsa are a fact not an illusion. Remarkably, Jerusalemites and Palestinians of the territories occupied in 1948 continue to be the major factor fending off Israeli aggression against the mosque amidst the absence of serious Arab stances.

So far, Israel has enforced its rules in Al-Ibrahimi Mosque while Arabs watched and acquiesced. The developments unfolding today trigger one question: Will officials continue to watch as Israel imposes an Al-Ibrahimi Mosque scenario in Al-Aqsa, or will they respond to the popular mood?

* Op-ed contributor based in Lebanon