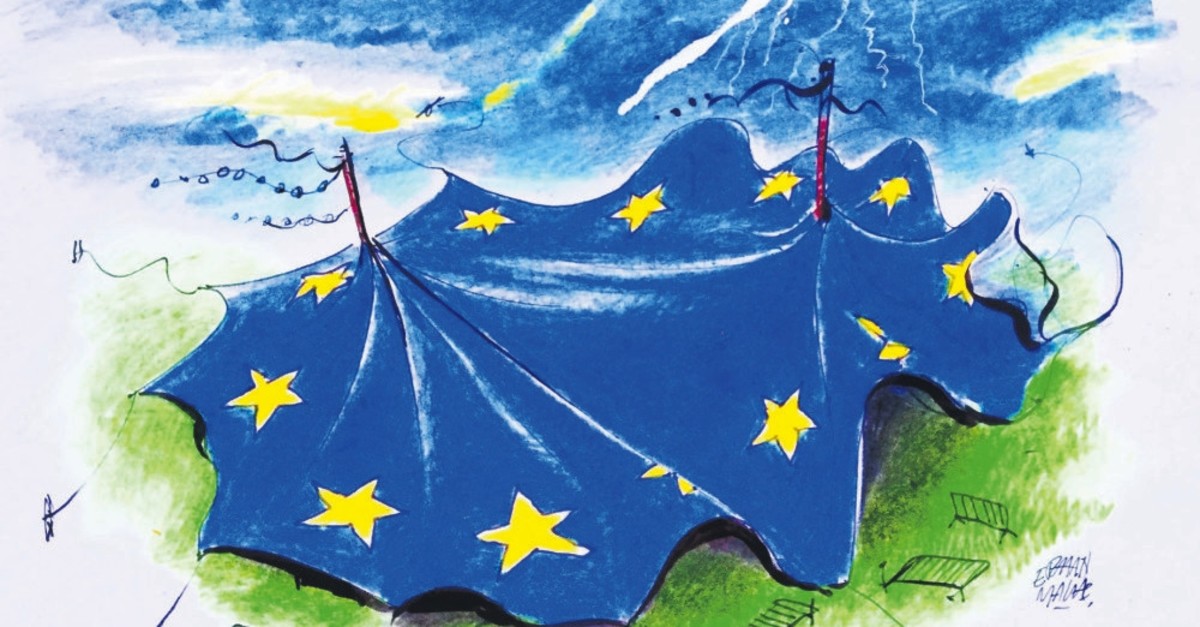 The loss of self-doubt and self-criticism has caused a crisis in European politics; this situation is bad for both the EU and Turkey

Alarm bells for Europe already rang in the 1990s, when the Berlin Wall fell, the USSR collapsed, the two Germanys reunited and the Eastern Bloc broke down. It's debatable whether this was an alarm bell or an opportunity. At this point, however, it seems that the risk is still there and it was an opportunity missed.

The outcome of World War II can be summed up by the occupation of Western Europe by the U.S. and Eastern Europe by the USSR. It was Britain, which had some military presence in Germany, but it mostly counseled or tried to counsel the U.S. on the reconstruction of Europe. It had handed over the title of the hegemon to the U.S., supposedly to take it back later. American brawn and dollars, together with British brains, had to usher in the new world order.

Had Europe deserved so much humiliation? Exactly! After World War I, borders changed but people stayed where they were. World War II, however, evolved into a cynical campaign to get rid of minorities. Not only during the war but also in its aftermath, many minorities were sent to the lands under Joseph Stalin's control, and thus the European countries got rid of their minorities.

Exploiting the world outside Europe, eviscerating other cultures, introducing genocidal technology to the world, killing more people than all previous wars combined in single world war in two stages, marked the dark face of European civilization. In short, some like intellectual Stefan Zweig committed suicide saying, "There is no place on earth left to go."

Either way, Europeans are very fond of pragmatism and utilitarianism. They had fallen so deep into shame and sunk so low that, as Tony Judt aptly observed, they had to "forget" to be able to make a fresh start. And this they did with such ease!

A total $208 billion in today's dollars (nearly $20 billion at the time) was pumped into the continent, while its western parts were occupied by U.S. soldiers and military bases. We are talking about hundreds of bases here.

Meanwhile, the USSR built its atomic bomb and attacked Korea. It was believed that Stalin was preparing to invade Western Europe and the attack on Korea was seen as a warm-up. But many prominent historians argued that there had never been such a risk or intention.

In fact, like all czars in the past, Stalin obviously expected an invasion from the plains of Eastern Europe. After all, it was Russia, not Europe, who faced three invasions from this direction throughout history.

After choosing to forget, however, Europe managed to move from hell to bliss in a few years, with the help of American dollars and soldiers. And this should be appreciated in any case.

Many European thinkers say they lived in a kind of heaven until the 1980s. That era of prosperity was made possible by the gush of U.S. dollars, U.S. protection, cheap labor imported from countries like Turkey, and by the opportunities typical of every postwar period.

Incidentally, when talking about forgetting, it must be mentioned that a great deal of the allegedly new bureaucracy in Western Germany consisted of former Nazis. These details have long been swept under the carpet. The French, on the other hand, reckoned with the infamous Vichy past by shaving the heads of miserable prostitutes who serviced German occupiers. Now, let's move on to the present day.

A new wave of dynamics

Ultimately, it appears that there will be no free protection for Europe anymore. U.S. President Donald Trump has stated it clearly. The postwar world order has basically collapsed. Europe got rid of its minorities during World War II, but those minorities were replaced by Muslims and Asians.

Europe was caught unprepared by multiculturalism and this has led to the rise of far-right. The EU has lost touch with ordinary citizens and turned into a worn-out bureaucratic and elitist structure. Nowadays, in many parts of Europe the people are in the center again through far-right movements and parties, and are taking revenge on the establishment.

Indeed, since centrist parties cannot shake off their lethargy yet, the angry masses, caught in a spiral of accelerating impoverishment, have no political medium to turn to other than marginal parties. There is only the exception of the Greens.

Now, EU leaders have decided to set up a 100 billion euros ($111.18 billion)wealth fund, the so-called European Future Fund, probably to pave the ground for a European army. Let's hope for the best.

Firstly, although the talk of creating a European army can be appealing, it would be a very difficult job. I am pessimistic on this issue. The EU is unlikely to tackle this issue unless it implements radical reforms to its structure serves ordinary citizens in Europe, and, in short, rises from its deathbed.

However, that does not alter the fact that Europe is facing huge challenges, not only in refugee and racism problem but also in trade, defense and energy. President Trump threatens Europe with increased taxes on imports and withdrawing from the defense of Europe.

Roughly, half of Europe's energy consumption is met by imports from Russia. In any case, it is a cause for concern. It's no surprise Britain is packing up for exiting the union.

Europe's political establishment, which failed to realize an avalanche that was about to hit Europe during the 1990s, is also unable to see that Europe's fate is closely tied to Turkey.Whether it is about refugee problem, trade, safe and cheap energy, or about Europe becoming a global power, it's ludicrous even to imagine an EU without Turkey. However, the rise of populism in recent years, euroskepticism and Euro-centrism has got out of hand so much that a rational assessment of Turkey would require a miracle.

It's simply impossible to transfer the energy resources from the Eastern Mediterranean to Europe safely and cheaply without the involvement of Cyprus and Turkey. But the EU shamefully supports Greece, the Greek Cypriot Administration, Egypt and Israel, which intend to bypass the rights of Turkey and the Turkish Republic of Northern Cyprus (TRNC).

It is obvious that Turkey will not renounce its rights. Isn't this too much of a double standard on Europe's part? What kind of absurdity is it to oppose Turkey and the TRNC defending their legitimate interests while those having no right in this region speak out and demand a share?

And what about the security of the EU's southern and eastern borders? Turkey's powerful army protects Europe's southern borders and it has obviously paid a huge price for this. Europe has shamelessly failed Turkey during the Syrian civil war. As for the PKK and the People's Protection Units (YPG), its Syrian offshoot, terrorism, it has protected, even supported these groups. The EU has remained silent in the face of the July 15 coup attempt by the Gülenist Terror Group (FETÖ). Just like PKK militants, FETÖ members move freely within Europe and are protected.

Without a doubt, Europe is a valuable civilization. But it is in the grip of a serious crisis. It seems to have lost its tendency to self-doubt and self-criticism. The weakening and especially collapse of Europe would bring no good to either Turkey or the world. We would like to see common sense return to the continent.

Even so, however, an uphill battle awaits Europe. We will be watching our neighbors anxiously.