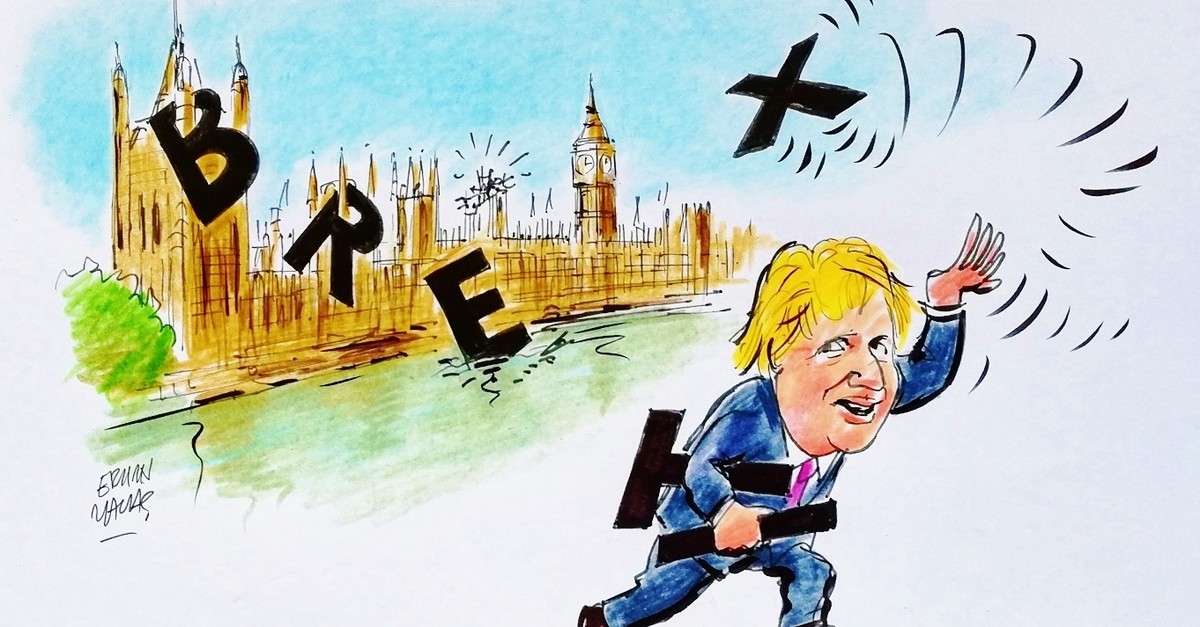 Since the beginning of Boris Johnson's bid for Tory leadership I have been joking about his Turkish heritage and how the Ottomans have been playing the long game. Johnson has been obliging me – as he has been obliging British commentators – with more and more ammunition for this extended satire. I'm not sure if the joke can be extended any further but he has done it. Boris Johnson, the Ottoman son, has returned the favor of May 1920 – when British forces closed down Istanbul Parliament – by closing down the British Parliament in August 2019.

In her memoir "The Turkish Ordeal," Halide Edib quotes her husband Adnan Adıvar, an Istanbul deputy, the night before British forces closed down the Ottoman Assembly, "Let the peoples – let the English people – see to it that their government, the oldest parliamentary government in existence, does not do injustice to a representative institution."

Adıvar is determined to go to work the next morning although they have heard that the Brits will storm the Assembly. "I was sure that he was taking what he thought to be the bravest and the best course; if the parliament was closed and the deputies were finally taken from a representative institution, the appeal to the popular sense of justice, he thought, would be enormous. Had I not realized with terrible clearness how painfully and irrevocably there existed in Europe two separate standards of humanity, I would have accepted his decision."

Luckily, Halide Edib persuades Adıvar not to go and they make the passage to Ankara where they help Mustafa Kemal with the founding of the new Parliament. The next day British troops storm the Bab-ı Ali, arrest the deputies and send them to exile in Malta.

I doubt if Johnson has any plans of sending his colleagues to Malta and the British Parliament isn't on lock down quite yet. Although social media understandably exploded at the news that the Queen had agreed to prorogue the Parliament, the document – all "privy council," "lord president" and "high chancellor" (yes, I was half-expecting High Septon to pop up) – says "order proroguing Parliament no earlier than Monday, Sept. 9 and no later than Thursday, Sept. 12, 2019 to Monday, Oct. 14, 2019."

So that means Parliament will open again only two weeks before the Brexit date of Oct. 31, and many believe that the members will not have enough time to negotiate a Brexit deal they can all agree on. One month more, one month less, at this point no one believes the British Parliament can agree on a deal and a "no-deal" Brexit seems like a certainty. It is the audacity of Johnson to make use of this measure to have his way that has shocked the British people and I assume rather entertained the prime minister himself. I think even Halide Edib would have been scandalized; though she thought the British wouldn't bat an eyelid closing down other people's parliaments, they would surely stop at their own?

When the Queen issued the order, Twitter historians were quick to inform us about "the last time Parliament was prorogued" and of course couldn't quite agree what counted as prorogation and what as dissolution. However, I think the general consensus is that the last "getting the monarch involved and everything" sort of prorogation happened in the 17th century. This then makes Boris Johnson, now the prime minister, the deputy for the 17th century, representing yet another glorious period of the British Isles like his conservative colleague Jacob Rees-Mogg, the deputy for the 18th century. Rees-Mogg's, incidentally, is the first name that appears on the fateful document (maybe it's not valid because it's not on vellum?) as counselor. Turkish Twitter added their voice to the melee to say that the last monarch to prorogue Parliament was Abdulhamid II, who has been reintroduced to Turkish and international audiences as a no-nonsense sultan in yet another madly popular Turkish drama. Could this series be the medium through which Johnson's puppet masters have been sending him coded messages about prorogation? You all thought it was Russia but hey, the long game.

Like the enraged Twitterati of today, in her memoir Halide Edib (who was no fan of Abdulhamid's prorogation either) calls the British move a "coup," or "coup d'état," which reminds us that both the Brits and Turks use words from other languages to express this blow to the running of a country. The Brits use a French word, and the Turks use an Arabic one, "darbe," both words meaning a hit. British people took to the streets the very evening for demonstrations against the coup, and of course my roving eye returned immediately to Rory Stewart who had said that he would set up an alternative government when prorogation raised its strange head during the Tory leadership campaign in June. Will he now keep his promise and set up an Ankara-style assembly somewhere in the vicinity of, say, Wolverhampton? Is all that walking part of his a cunning plan to identify the township that would be most hospitable to his rogue parliament? Will later generations refer to him as Ata-Brit, as Alex Christie-Miller suggested in a tweet?

I may still be making jokes, but I see signs that the British public has finally, finally, stopped finding Johnson funny. More surprisingly there seems to be real frustration with the Queen, that seemingly most unassailable of British authority figures, because she has not found some secret code written on animal hide, some parliament horcrux that could've stopped Johnson's punch to the system. There's still quite a bit of time till Sept. 12, and there's no telling what Boris Johnson may still have in store for British politics.