Behind the smokescreen of Erdoğan-Putin negotiations 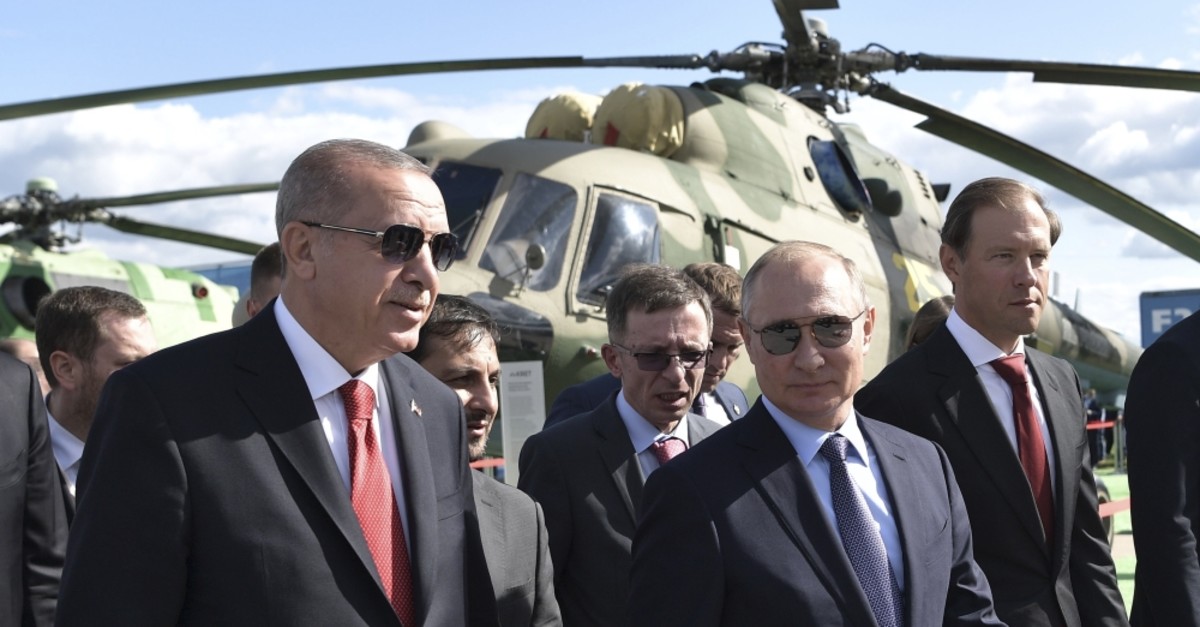 Spontaneous meetings between the presidents of Russia and Turkey have been taking place on a regular basis as of late. Most of the get-togethers are in fact a requirement due to the developments in Syria, which have reached an important intersection.

Everyone understands that President Recep Tayyip Erdoğan and Vladimir Putin are discussing extremely serious issues that affect not only affairs in Syria, but, without exaggeration, the fate of the Middle East as a whole. The nature of bilateral negotiations is clearly seen, even from the laconic remarks made by the two leaders after their meetings.

In general, observers are left wondering about the scope of the meetings, with both sides opting to not release detailed information about possible agreements that have been reached. Erdoğan and Putin often engage in "information fasting" with the media, limiting themselves to general phrases about territorial integrity and their commitment to continue the fight against terrorism in Syria.

In this sense, President Erdoğan's prompt visit to Moscow on Aug. 27 was perfectly furnished, much better than other negotiations of such sort. The annual International Aviation and Space Salon (MAKS) 2019 served as an excellent smokescreen for serious negotiations between the two leaders on the situation in Syria.

In addition, MAKS-2019 became the platform from which the Russian Federation and the Turkish Republic found it extremely convenient and timely to send certain signals to the outside world.

Of course, not only that, there is good ice cream in Russia and sometimes it is eaten without spoons. Putin, as a hospitable host, treated his Turkish counterpart and showed Erdoğan how ice cream is eaten in Russia.

No press conference of the two leaders aroused such genuine public interest in Russia as the video of the two leaders enjoying ice cream. This storyline became excellent "viral content," and exploded in Russian media, with significant public attention given to it during the summit.

Did Vladimir Putin and Recep Tayyip Erdoğan have Russian ice cream together? They did. So, the Russian public reasoned, everything is in order in Russian-Turkish relations, despite the different views of the parties over Syria. This means, we, as Russia and Turkey, are continuing to cooperate as normal.

The ice cream was just dessert to the main dish intended for the general public, an hours-long inspection by the two presidents of the latest products of the Russian aviation industry displayed at MAKS.

Other important news for the Russian media: Erdoğan showed genuine interest in MAKS, personally examining almost every exhibit at the fair.

The only thing that could compete with the ice cream was Erdoğan's inspection of Russia's newest fifth-generation Su-57 fighter jet alongside Putin. This became the main course of MAKS-2019, reinforced by news from Ankara that the second phase of deliveries of the Russian S-400 air defense systems to Turkey began on Aug. 27.

Of course, the days that Turkey acquires the Su-57 from the Russian Federation are still far off, even after Putin's personal presentation.

The Turkish struggle to stay in the F-35 project continues. However, with MAKS-2019, the Turks sent a very serious message to the United States – the F-35 could be replaced by the Su-57 just like the Patriot system was replaced by the S-400. In general, cooperation in the defense industry between Russia and Turkey looks like it has a great future, although it is not welcomed by those Putin neutrally calls "Western partners."

And yet, it is unlikely that President Erdoğan hurriedly arrived in Moscow on Aug. 27 to send signals to Washington. Although he did not miss the opportunity presented to him to do so from the Russian Tribune.

A serious matter, much more than Russian ice cream and the newest Russian Su-57, was hidden from the general public behind the dense smokescreen of MAKS-2019. It was the difficult situation developing in Russian-Turkish relations because of Idlib.

It is by no means accidental that on Aug. 27, the day of the Moscow talks between Putin and Erdoğan, complete silence reigned among the truly serious experts on Russian-Turkish relations. Russian experts were politely asked from above not to engage in public discourse about what was happening in Russian-Turkish relations and what to expect, specifically at this sensitive time.

Relations between the two countries, before everyone's eyes, are being tested by what is happening in Idlib. Almost a year ago, the result of President Erdoğan's visit to Russia was the achievement of the "Sochi agreement."

In September 2018 it was decided that, with the direct participation of Turkey, the moderate Syrian opposition would be separated from radicals and terrorists, and the latter would lay down their arms.

It was this formula that enabled Russia to hold back the offensive pressure of Damascus in the fall of 2018, guaranteeing, from its side, the implementation of the Sochi plan. However, day by day, it is becoming more and more difficult. If a year earlier the territory of Idlib controlled by radicals was only around 50%, today this figure has reached 90%.

Such dynamics resemble the growth of a cancerous tumor at the last stage, when chemotherapy cannot save a patient and the doctors have to consider a surgical knife. With this, it has to be remembered that in fact Damascus has already won the civil war and Idlib remains the last hotbed of tension, which will have to be eliminated, one way or another and sooner or later.

Russia cannot endure the offensive impulse of Damascus indefinitely – the Syrians are fighting on their land, and, although Russia is an important participant in the settlement of the Syrian conflict, yet we are an invited side. Russia, in this sense, is not the United States, which is trying to act not as a guest, but as the host in every foreign country.

Likewise, Russia cannot just ignore and be silent when it comes to terrorist attacks on its military bases from Idlib. The statistics regarding this issue are extremely unfavorable: Over the past year the number of attacks from Idlib has increased many times over.

Moreover, the unresolved issue of Idlib does not allow parties to move to a full-fledged political settlement in Syria. It is clear that it is impossible to form a constitutional committee and talk about the post-war structure of Syria without eliminating the country's last hotbed of terrorist threat. All talk of a constitutional committee against this background looks hasty and premature.

As President Putin has repeatedly emphasized, Russia understands Turkey's concern about its security, and also shares the Turkish alarm about the possible exacerbation of the humanitarian situation in the region if a full-scale operation in Idlib begins.

These statements by Vladimir Putin do not mean that there are no contradictions between Russia and Turkey over Syria. However, the Russian position in relation to Turkey is the position of a partner interested not only in maintaining what has been achieved, but also in the further development of Russian-Turkish cooperation.

The fact that Russia and Turkey have space to maneuver, in particular, was shown by MAKS-2019, which was held for the first time in the history of bilateral relations with the personal participation of the presidents of our countries.

But whether the parties will be able to convert the existing opportunities into further movement forward, will, in many respects, be determined by how Russia and Turkey approach the solution of the Idlib issue.

It is worth underlining that Russia is extremely scrupulous in its relations with Turkey and what is constantly being demonstrated to the Turkish side. However, hour "X" is coming, when Russia and Turkey will have to decide on something in Idlib.

The meeting on Aug. 27 occurred without any statements on this matter by the parties. However, not far off is another meeting in the Astana format in Ankara on Sept. 16, which should bring something more specific than general statements by Russia, Turkey and Iran.

Let's hope that the presidents of Russia, Turkey and Iran, in the Turkish capital on Sept. 16, will not only try Turkish ice cream, but also take the next concrete step in the Syrian settlement.

No doubt Turkish ice cream from Maraş is equally famous and delicious. But if there is good news from Syria it will get a very special flavor – that is that the aftertaste of the dangerous "Idlib turn" in Russian-Turkish relations has successfully passed. Both Russia and Turkey are equally interested in this.