400 years of Ottoman rule in Lebanon: An uneasy negotiation 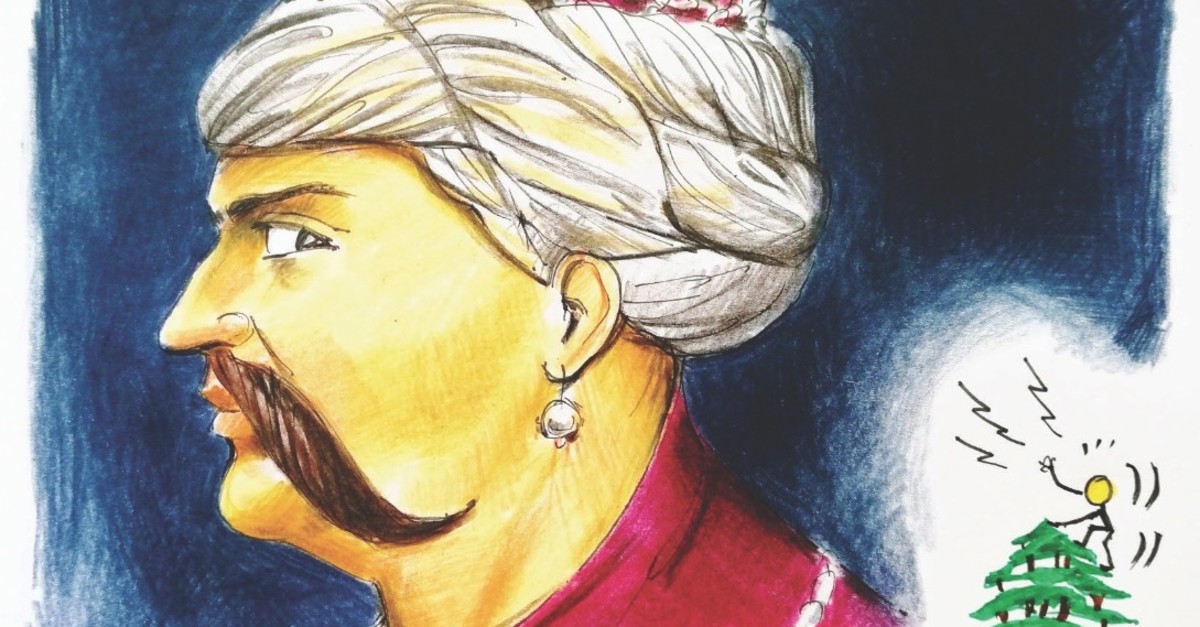 Arab nations pointing to Ottoman rule as the cause of the region's current 'backwardness,' as the Lebanese president recently did, forget it is largely a problem of modernity and the new nation-state structure

Arab nations tend to point to Ottoman rule as the root cause for the region's current backwardness and interpret that 400-year period primarily as an era of repression and terror.

This is largely a modernity-related problem of the new nation-state structures that emerged in the Middle East following World War I. Modern national identities are shaped through the imagination of an "other" in the past and further beyond that past, of a "golden era" waiting to be recovered.

And it's no different for Lebanon, either. But Lebanon, which rejects an identity based on Arab and Islamic heritage but prefers one based on a blend of Mediterranean, Western and Phoenician elements, differs significantly from other Middle Eastern nations: During the 400-year Ottoman rule, Lebanon (or Cebel-i Lübnan [Mount Lebanon], as it was referred to under Ottoman rule) enjoyed the greatest autonomy among the Arab-populated provinces.

Basis of the dynamics

What shaped the general pattern of Ottoman rule in Mount Lebanon was the recognition of the dominance of great and powerful families in the region. Collection of taxes and maintenance of order was enough for Istanbul.

Relations between these families, which still keep their dominant position in Lebanese politics today, formed the basis of the dynamics of conflict during the feudal period as well. These families (zuama) basically recognized each other's equal status, and one of them held dominance in the capacity of the emir of Mount Lebanon.

The Sublime Porte (Bab-ı Ali) carefully watched the balance of power in the emirate, which covered a much smaller area than today, and restored the balance by supporting other families when one family became too powerful. Supporting the Shihab family in the 17th century after the revolt of Fakhr-al-Din II, a Druze Ma'ani emir of the Mount Lebanon Emirate, resulted from that policy.

In the modern period, Mount Lebanon's cosmopolitan makeup composed of different sects and faiths became a ground for potential intervention by European powers. Lebanon's ports, which served as key conduits for the transfer of products from Syrian cities like Damascus and Aleppo and from Iran, came to hold greater significance.

For European merchants, consuls and Catholic Jesuit and Protestant missionaries, Lebanese lands became productive places from the 18th century onward. The rule of Muhammad Ali Pasha, Ottoman governor of Egypt, who rose to power after the invasion of and withdrawal from Egypt by Napoleon, over Syria and Lebanon had far-reaching effects on the political atmosphere.

In an age of revolutions, the idea of the motherland (patrie) had become a topic constantly pondered by Arab intellectuals, and visions of Egypt, Lebanon and Syria as separate, unique and independent entities began to form. As the Maronite-Druze conflict, the roots of which can be traced to that period, evolved into a bloody civil war with the intervention of European powers, the Sublime Porte had to adopt a different administrative approach in the region. Devised by Fuad Pasha, an adept statesman of the Tanzimat (Reform) era, the new system both brought about an atmosphere of peace in Lebanon for nearly 60 years and introduced into the political system various dynamics that formed the basis of the modern state system in Lebanon.

The resulting provincial government, the Mutasarrifate of Mount Lebanon, appointed a Christian as the governor of Lebanon, while also creating a governing assembly composed of members from other sectarian groups in the country.

Representatives from the Maronite, Druze, Greek Catholic, Greek Orthodox, Sunni and Shiite communities would have equal say in the assembly. The Christian administrator to be appointed as mutasarrif (governor) had to come from outside of Lebanon, and the Sublime Porte chose the best possible candidates for the region, which was becoming ever more sensitive due to the fault lines of sectarian divisions.

That system, which entailed the formation of a mixed police force reflecting the sectarian demographic composition within its jurisdiction, caused the last 60 years of Ottoman rule in Lebanon to be called as Pax Ottomana.

A general result of Tanzimat reforms in Ottoman lands was growing bureaucratic centralization. Yet, as a result of that process the reforms in Mount Lebanon took a completely opposite direction and Lebanon came to be governed through a modern system that confirmed its autonomy from the center in the administrative sense as well.

During the reign of Abdülhamid II, certain initiatives were launched to break the hegemony of missionary schools, and the number of state schools in Lebanese cities and particularly in Beirut increased considerably.

Though the loss of the Balkan territories during that process forced the empire to form a new policy with the vision of a Sunni Muslim identity, Lebanon kept its unique position among the Arab provinces of the empire.

Ottoman rule in Lebanon, which was implemented via certain families during the feudal period and which was far from strict domination and conducted through a system of covert negotiations, focused in the modern era on preserving the delicate balance between religious and sectarian groups.

The nationalist fervor that spread to every corner of the empire from the late 19th century onward entered Arab lands via Lebanon. Although this was related, to a large extent, with the growing popularity of Eurocentric ideas introduced by missionary schools in Lebanon, the pluralistic structure engendered by the mutasarrifate system also played an important role.

In the end, the Nahda (awakening or renaissance) movement, which was shaped by Christian Arab thinkers, laid the foundations not only of Arab nationalism and Arab national consciousness but also of regional loyalties like Syrian and Lebanese identities.

As a consequence of political movements born out of that fertile ground, the forms of modern citizenship, as we know today, which are based on territorial integrity, took root in the Arab world.

As World War I ended and new political borders in the Near East were being drawn by Britain and France through negotiations, the structure of the French administration in Lebanon and Syria was shaped in line with the principle of creating a separate political entity for every ethnic-sectarian group in the region.

Accordingly, Lebanon was formed as a separate state where a Maronite majority lived, with Arab and Islamic traditions being excluded. Symbolic elements emphasizing historical continuity were created for the Lebanese identity, which was regarded as an extension of the ancient Phoenician identity.

The holy cedar tree, which is frequently mentioned in the Bible together with these lands and which the Phoenicians used to build their ships, was included in the Lebanese flag as a motif. While the images of the Ottoman and Turk became the "other" of the Lebanese national identity, the Phoenician past was recast as a "golden era" waiting to be recovered.

Ma'anid emir Fakhr-al-Din and the other Lebanese who had rebelled against Ottoman rule were turned into cult figures as the sublime defenders of national consciousness. And Lebanon's past under Ottoman rule, including the mutasarrifate period, was interpreted as a 400-year-long story with the struggle for independence engraved in it.

Beginning with its foundation, images of the Ottoman and Turk served, just as those of Arab and Islam, as reference points with negative connotations for Lebanon. For a long time, textbooks used in state schools were written by scholars of St. Joseph University, which had been founded by Jesuit missionaries.

And history and geography books tried to remake Lebanon as a Western political unit that is unique and totally free from all these images.

Over time, it has turned out that Lebanon cannot rely on being an exclusively Maronite enclave, a central base for the Christians of the Near East, and the demographic composition underwent a dramatic change with the increase in the country's Muslim population.

Under these circumstances, pro-Phoenician Lebanese nationalism was also revamped and consensus among sectarian groups, like in the mutasarrifate period, became important again. Lebanon's independence from the French mandate was achieved through the determined efforts of representatives from every sectarian group in the national assembly.

The consensus among leaders of Christian and Muslim communities shaped Lebanon's new political structure, and, as in the mutasarrifate system, a "consociational" model emerged in which certain positions were left to certain sectarian groups. Lebanon's independence from Syria and France has come to have equal importance, and an uneasy consensus between Muslim Arab nationalists and Christian Lebanese nationalists arose, which made the state of Lebanon possible.

In other words, President Aoun's social media post contains many factual errors. And the statement "With Lebanon entering under French influence, a new chapter of our history began," amounts to disowning the memory of the country's first president, Maronite Bishara al-Khouri, and other Lebanese nationalists, who had made a lot of sacrifices trying to gain independence from France.

That Lebanese nationalism has stopped being the constituent/official ideology after independence in 1943 and come to have an increasingly defensive position had significant consequences for Lebanon. After all, nationalist Arabs of the country do not remember the Ottoman past with gratitude due to [Ottoman general] Djemal Pasha's actions in 1916.

Besides, the Armenian population of Lebanon surged after World War I. All of this has rendered it irrelevant and pointless for the groups that stood out in Lebanon's political dynamics in some way to portray the country's Ottoman and Turkish past in a positive light.

As Aoun's tweet also proved, attacks on the Ottoman past still have a high chance of garnering support from almost every group. Lebanese society is too sectarian to agree to hate or love anything, but every sectarian group has its own reasons for seeing the Ottoman past as the "root cause of backwardness."