What comes after Brexit? 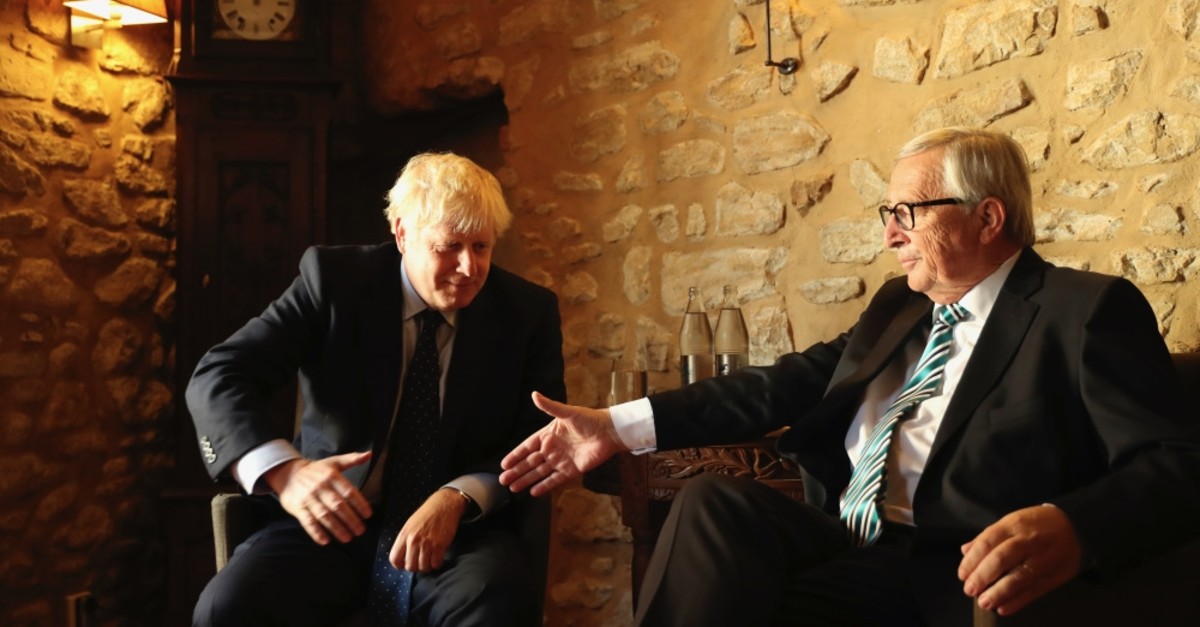 European Commission President Jean-Claude Juncker (R) reaches out to shake hands with British Prime Minister Boris Johnson prior to a meeting at a restaurant in Luxembourg, Sept. 16, 2019.
by Tarık Oğuzlu Sep 17, 2019 12:48 am

In June 2016, a slight majority in Britain voted to leave the European Union. In March 2017, formal negotiations between the United Kingdom and the European Union concerning the modalities of the British withdrawal began.

The hope was that both sides would reach a deal by the end of March 2019, thereby the United Kingdom would leave the union with a deal that would mitigate the negative consequences of Brexit and Britain and the EU would have a new arrangement concerning their relationship in the post-Brexit era.

However, the March 2019 deadline passed with no mutually-satisfactory outcome having been reached. The EU offered the United Kingdom a new deadline – Oct. 31, 2019. By then the conservative British government would do its best to make sure the British Parliament would approve a managed-divorce – soft-Brexit – so that the United Kingdom would remain a part of the EU customs union while the rights of European citizens living and working in British territories and British citizens living and working in EU members are protected.

However, Theresa May had to resign as prime minister because Parliament voted against her proposed deals. Boris Johnson took up her post and geared up his efforts to stick to the Oct. 31 deadline.

As of today, it is uncertain if Prime Minster Johnson is going to get the Parliament to vote in favor of his preferred solution – Britain leaving the EU without a deal – hard-Brexit, as the majority of British parliamentarians is against this option.

Johnson's Conservative government is now in a lame-duck position because a sizeable number of conservative deputies resigned from the party and openly argue against the option of hard-Brexit. All options are now on the table, ranging from a new referendum to new elections that might potentially bring to power a new government being more receptive of a soft-Brexit arrangement.

What matters at this juncture is that the outcome of Brexit, either in soft or hard versions, will certainly affect the future of the European Union as well as the transatlantic relationship negatively.

The first thing to note in this regard is that with Brexit the supporters of nationalism and particularism will gain more clout in international politics to the detriments of globalizers and ardent supporters of universalism. The hallmarks of the liberal international order will further erode and the ones who argue against unchecked globalization will gain further ground.

On the eve of the Brexit referendum back in 2016, the Brexiters pointed to the negative consequences of unchecked deregulation of economic markets, centralization of economic and political decision-making processes at supranational levels, opening of boundaries to outsiders, the corrosive impact of outsiders on national culture and communal values, the growing wealth gap between globalized elites and technocrats on the one hand and the working people employed in the traditional manufacturing sectors on the other, the gradual erosion of national sovereignty against transnational centers of loyalties, the growing feeling that the people on the street are no longer in command of their lives and increasing terrorist attacks and the growing appeal of religious extremism.

This thinking will be boosted by the simultaneous rise of Chinese and Russian models of illiberal authoritarianism on the one hand and nativist and "firstist" turn in Donald Trump's America. It is no wonder that Trump, Vladimir Putin and Xi Jinping offered verbal support to Brexiters.

Brexit will likely boost the forces of particularistic nationalisms in Britain and across the globe. For instance, people of Scotland and Northern Ireland might demand their own states believing that they would not be able to derive positive benefits from the EU in post-Brexit Britain.

Brexit will signify the fallacy of liberal internationalist belief that unity in diversity could be achieved at the international level under such cosmopolitan polities as the European Union.

In addition to their assaults on the negative consequences of the globalization process in the realm of economics, these circles are predisposed to put identity-related concerns at the center of their opposition to the globalized ruling elites in their countries. They do not want to lose their jobs to outsiders in the name of driving further economic benefits from the outsourcing process. They want to see real increases in their wages.

They do not want to suffer the negative consequences of the economic policies supported and adopted by globalized economic and political elites. They do not want to mingle with outsiders in the name of helping prove universal rights and values right. They want to protect their traditional social and cultural values.

Change of the mainstream

Brexit will likely shore up the "realist, pragmatic and isolationist" foreign policy tendencies in the United States while emboldening "anti-integrationist and anti-federalist" circles across the EU. This also suggests that mainstream-center political parties across the western world will find it more difficult than ever to attract the support of voters should they continue to offer status-quo oriented, neoliberal, globalist solutions to the real and daily problems of ordinary people.

In a post-Brexit world, striking an optimum balance between freedom and security in Western societies might be more difficult to achieve as people will either try to preserve their freedom behind fortress borders by pursuing isolationist policies or acquiesce in the gradual curtailment of liberal freedoms in the name of providing security while the globalization process continues in full swing.

Paradoxically though, post-Brexit EU might evolve into a more supranational federal polity mainly because this might be the only route for the EU to survive in the game of geopolitical competition among traditional great powers.

Neither Germany, nor France, nor any other EU member state can successfully survive in the emerging post-liberal international order on its own capabilities. In fact, since Brexit referendum in the summer of 2016, some steps have been taken along this way. PESCO was activated and French and German leaders expressed their support to further policy convergence in the realms of economics and foreign and security policy.

With Brexit now becoming a reality the EU will most likely turn out to be a more intergovernmental than a supranational beast and the idea of multi-tier EU will gain further ground.

Such a turn in the European integration process might further dilute the EU's international clout while simultaneously re-inviting the dynamics of balance of power politics in the continent.

Absent the United Kingdom inside the EU acting as a power balancer and an ardent supporter of free market economics and transatlantic linkages, the European Union might come under further German hegemony and this might help reawaken the old fears of Germany.

The United Kingdom has been the most important link connecting the two shores of the Atlantic to each other. Unlike France, Germany shares with the United Kingdom that the foreign and security policy identity of the European Union should be crafted in a NATO friendly pro-transatlantic fashion. With the U.K., alongside France, having the much needed hard power capabilities to endow the EU with strong international identity, Brexit might inadvertently push the German leaders to redefine Germany's international identity in more traditional manners, which Germany has for a long period of time succeeded in avoiding.

The pressure on Germany to devote more resources on traditional security and defense will certainly increase in the post-Brexit era for another reason as well. Trump's critical stance on the U.S.-led liberal international order and his growing criticisms of such multilateral platforms as NATO and EU will offer additional incentives to German and French leaders to ratchet up their efforts to play more credible and responsible geopolitical roles in the emerging era.

The ability of a post-Brexit EU to cope with the negative consequences of growing geopolitical competitions among great powers will increasingly require robust French and German leadership.

Given Brexit and the strong support of Trump's America to this outcome, the bonds between the two shores of the transatlantic ocean will further weaken. The possibility of the United States to secure European cooperation against Russia and China should not be taken for granted in the post-Brexit environment either.

The EU and Russia are neighbors and share the same geopolitical environments. The EU and China abhor Trump's mercantilist approach to international trade and financial globalization and still believe that they derive immense benefits from multilateralism and economic globalization.