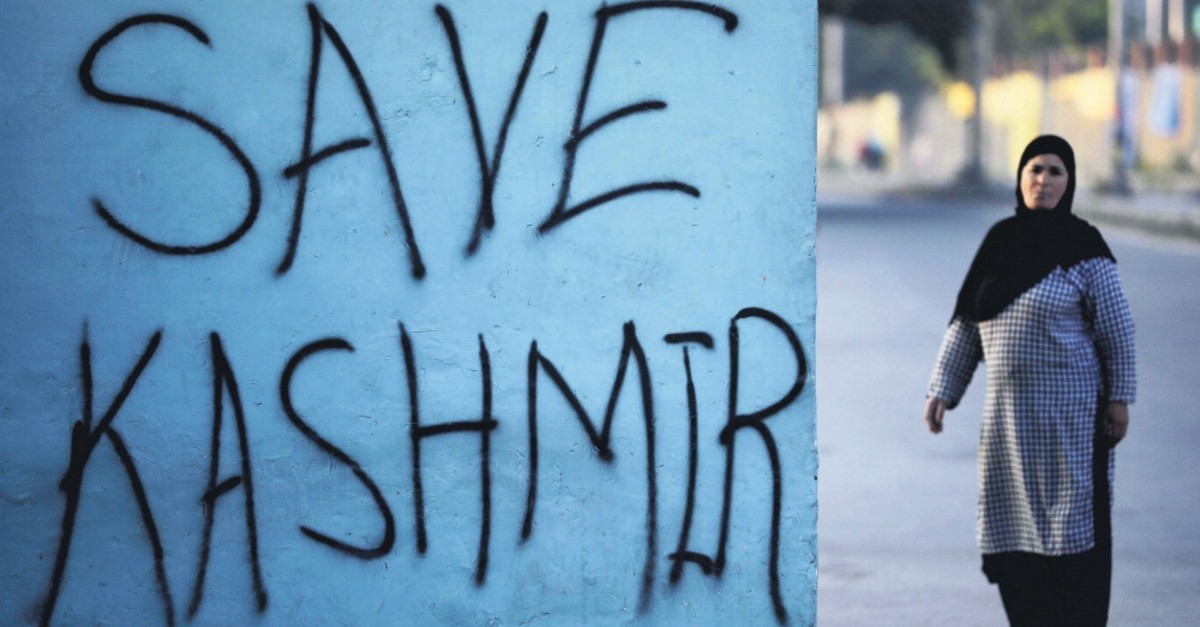 What happened with U.S. President Donald Trump's unprecedented drive to mediate between India and Pakistan in the Kashmir dispute? Trump's mediation turned into "Modi-ation" in the final scene.

This final scene was played last month in France where Trump met India's Prime Minister Narendra Modi on the sidelines of the G7 meeting and said India and Pakistan could handle their dispute over Kashmir on their own.

Ironically, Trump left the dispute to the countries, which have been unable to resolve it in 70 years bilaterally on their own. What they did do on their own is flight three wars over Kashmir and they are presently set to fight a fourth war, which might take an ugly nuclear turn.

Trump's mediation drama actually triggered India to annex the disputed territory. Was it Trump's mediation or "Modi-ation" on Kashmir? It was "Modi-ation" because Donald Trump pushed Modi into playing India's trump card first time in 70 years on Kashmir, which he played on Aug. 5 by a revoking the special autonomous status of Kashmir.

The Modi government trampled all the international laws and conventions, bilateral agreements and U.N.resolutions under its feet and split a disputed territory into two unions and put it under direct control of New Delhi, enforced curfew, imposed a communication blackout and deployed 28,000 more troops in the territory with an already heavy military deployment.

What was extremely disappointing was Washington's reaction to New Delhi's unilateral move. Why did the U.S. not strongly reject New Delhi's mantra of "an internal matter" over its unilateral measures vis-à-vis Kashmir, a disputed territory documented in numerous U.N. resolutions?

Trump's month-long mediation drama began on July 22 in a White House meeting with Pakistani Prime Minister Imran Khan when Trump for the first time offered to mediate between the two South Asian archrivals in the Kashmir dispute.

He said, "I would love to be a mediator." Trump reiterated his offer a few days before Aug. 5 when India militarily annexed the disputed territory of Kashmir. Had Trump winked at Modi through "repeated mediation offers" for a "go ahead" with his unilateral Kashmir plan? The change of the legal status of Kashmir was presumably the second episode of Trump's mediation drama.

Trump actually dangled Islamabad a carrot by offering to mediate on Kashmir because he wanted Pakistan to extend full support to broker a U.S. peace deal with the Afghan Taliban. Though India raised eyebrows over Trump's mediation offer and bluntly rejected third-party mediation repeating its old mantra of bilateralism, Trump continued to play the mediation song.

The drama however reached the climax in the post Aug. 5 situation when Trump talked to Modi and Khan on the phone and urged both sides to exercise restraint. At the climax, Trump practically assumed the role of "de facto mediator" as he declared at this stage that he would do his best to mediate in the "explosive and complicated" Kashmir dispute between nuclear-armed India and Pakistan.

Trump in the final scene of drama was easily convinced by Modi in a meeting in France and his mediation ended up in "Modi-ation." Is there a Trump-Modi nexus behind developing Kashmir situation? And what about this scene that could be tragic for over a billion people in the region?

Realistically speaking, Kashmir is not India's internal matter, nor is it even any longer a bilateral dispute between India and Pakistan, it has become a potential nuclear flashpoint raising global concerns about a nuclear nightmare on this planet. Will the U.S. let a sparking Kashmir light the nuclear fuse of South Asia? By abolishing the autonomous status of Kashmir, India has pushed the dispute 70 years back to 1947 when the two South Asian nations were in a state of war on Kashmir.

Tensions today are at an all time high between India and Pakistan. Adding fuel to the fire, the Indian Defense Minister Rajnath Singh hinted on Aug. 16 at abandoning India's "no first use" doctrine. Prime Minister Khan has vowed that Pakistan "will go to any extent" to support the cause of Kashmir. Nuclear weapons are Pakistan's main line of defense to prevent India from both conventional and surgical strikes that would lead to penetration through the country's defenses.

Now Kashmir is virtually sparking, as the war hysteria on both sides of the Kashmir border grows higher and higher and could light the nuclear fuse of the region. The U.S. think tank Stratfor has timely warned that a potential nuclear conflagration cannot be anything other than a matter of international peace and security. In its report last week it said, "The specter of nuclear war haunts tensions between India and Pakistan, and the disputed territory of Kashmir could provide the spark that lights South Asia's nuclear fuse."

U.N. intervention in Kashmir is inevitable as the dispute has all the potential to trigger a nuclear conflict between the two countries.

* Freelance op-ed contributor based in Karachi, Pakistan, contributing analyst at the South Asia desk of Wikistrat