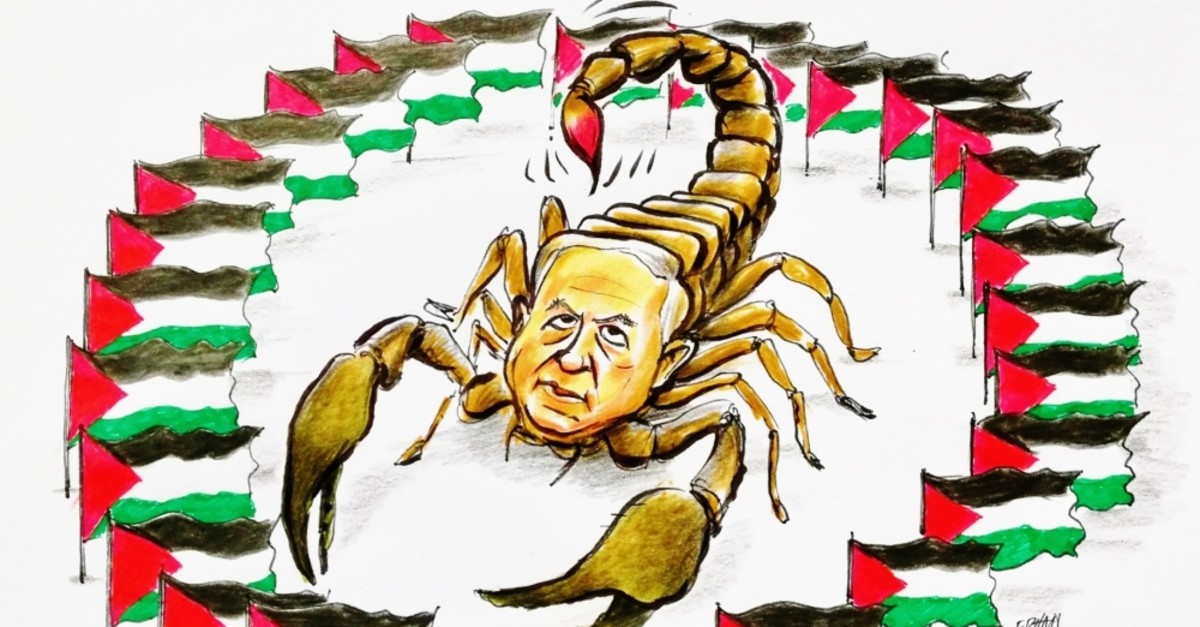 Benjamin Netanyahu vows to annex more Palestinian land, disregarding all international humanitarian and ethical calls, thereby adding to the misery of Palestinians under the occupation and destroying the possibility of any future peace solution

Despite the illegality of the Israeli settlements as well as its violation of international law, Israeli Prime Minister Benjamin Netanyahu reaffirmed last week his pledge to annex all Israeli settlements in the occupied West Bank. "With God's help we will extend Jewish sovereignty to all the settlements as part of the [biblical] land of Israel, as part of the state of Israel," said Netanyahu, aiming to boost the conservative voter base for the Sept. 17 elections.

Another provocative movement that Netanyahu recently made was a contentious visit to Hebron, a city in the Palestinian Territories following plans to increase settler presence in the area.

"We are not strangers in Hebron, we will remain here forever," Netanyahu said during a speech that he delivered outside a contested holy site known to Muslims as the Ibrahimi Mosque and to Jews as the Tomb of the Patriarchs.

The city of Hebron, where 200,000 Palestinian citizens live and 800 settlers are distributed, has long been a flashpoint and a continuous troubled area.

Israel's policy of settling Israelis in the occupied Palestinian Territory by displacing the local population and confiscating their lands is a grave breach of international humanitarian law.

The establishment and constant expansion of settlements have impacted Palestinians hard with regard to their loss of homes, fields and water resources along with restrictions on their movement and serious threats to their physical security. These impacts relate to continuous Israeli settlers' attacks on Palestinians and their properties due to the absence of adequate law enforcement by Israeli authorities.

Since the 1967 war, Israel has relentlessly implemented a settlement program in the occupied Palestinian territories, including East Jerusalem, and since the establishment of these settlements, settlers moved in and thousands of Palestinians were displaced by force from their legally owned lands and homes.

Israeli settlements are meant to be permanent places of residence and economic activity for Jewish Israelis and for annexing more lands from Palestinians.

Settlements spread throughout the West Bank are connected by a network of roads that surround all major Palestinian cities, towns and villages. The number of illegal Israeli settlements in the occupied Palestinian territories has reached 503, with 474 located in the West Bank and 29 in East Jerusalem, while the number of settlers exceeds 600,000, mostly in Area C, the potential place for urban agricultural and economic development where Israel retains exclusive control, including over law enforcement, planning and construction.

Israel blocks any Palestinian development in this area by designating large swathes of land as state land, firing zones, nature reserves and national parks; allocating these lands to settlements and their regional councils; or by introducing prohibitions to the area now trapped between the Separation Barrier and the Green Line (the boundary between Israel's sovereign territory and the West Bank).

Israel restricts Palestinian construction by seldom approving requests for building permits, whether for housing, for agricultural or public uses, or for laying infrastructure.

In contrast to the restrictive planning for Palestinian communities, Israeli settlements are allocated vast tracts of land, drawn up detailed plans, connected to advanced infrastructure and the authorities ignore illegal construction by settlers. Recently detailed, modern plans have been drawn up for the settlements, including public areas, green zones and, often, spacious residential areas to enjoy a massive amount of land, including farmland that can serve for future development.

Israel's policy in Area C is based on the assumption that the area is primarily meant to serve Israeli needs, and on the ambition to annex large parts of it to the sovereign territory of Israel.

To that end, Israel works to strengthen its hold on Area C, to further exploit the area's resources and achieve a permanent situation in which Israeli settlements thrive and Palestinian presence is negligible.

In doing so, Israel has de facto annexed Area C and created circumstances that will leverage its influence over the final status of the area.

Through this critical policy of settlement expansions, Israel added radical changes to the map of the West Bank, precluding any real possibility of establishing an independent, viable Palestinian state in fulfillment of the right to self-determination thereby.

Although the West Bank is not part of Israel's sovereign territory, Israeli has applied most of its domestic laws to the settlements and their residents. As a result, the settlers enjoy almost all the same privileges as citizens living in Israel, while Palestinians continue to live under martial law systematically deprived of their rights and denied the ability to have any real impact on policy making with respect to the territory in which they live. In creating this reality, Israel has formed a regime in which a person's rights depend on his or her national identity.

This is the real policy of the Israeli right wing, as can be seen in their campaigns during Israeli elections: Netanyahu pays provocative visits and vows for more Palestinian land annexations, disregarding all international humanitarian and ethical calls, thereby adding to the misery of Palestinians under the occupation and destroying any possibility of any future peace solution.