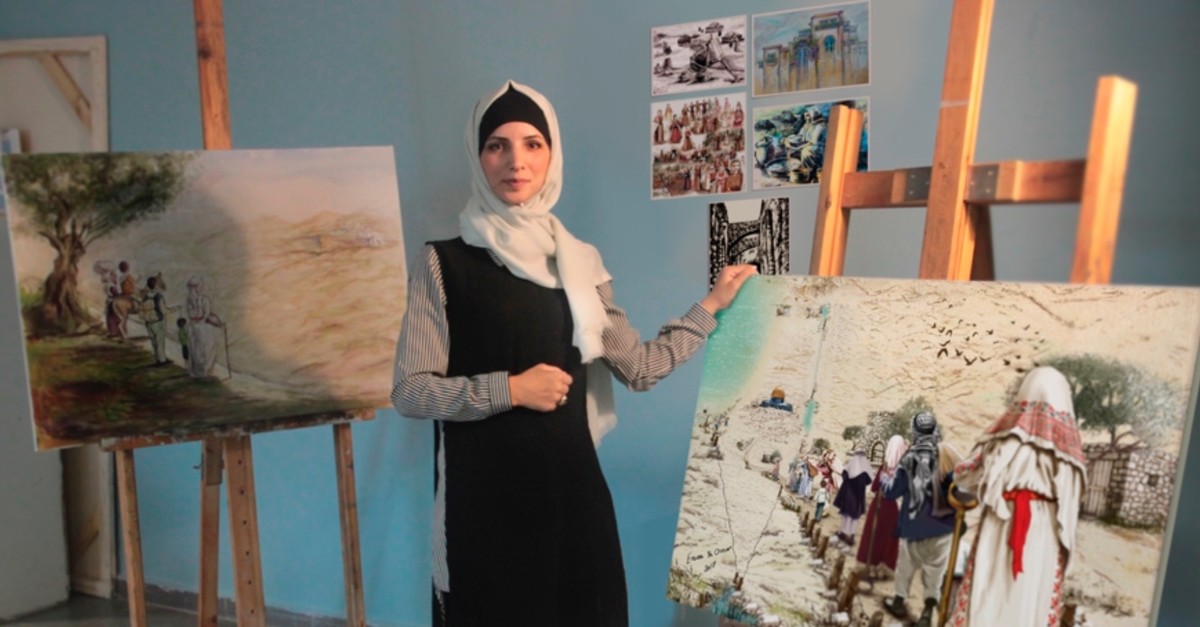 Palestinian artist Iman Abu Arra poses with her paintings in her studio at Hacettepe University in Ankara.
by Ali al-Hasan * - Zaid Isleem ** Sep 23, 2019 12:00 am

‘Our dream to return is huge, and the political and international circumstances stand against us, but at least we have the right to dream, and once our dreams are drawn, this is the first threshold of being achieved'

A few minutes is insufficient to discover the inner meanings of Palestinian artist Iman Abu Arra's paintings, especially her "Last Return," which is a symbolic rendition of the Palestinian people's Right of Return to their homes in historical Palestine.

While pondering the "Last Return," the viewer can see several moving scenes portraying hope, resolve and the love of one's homeland. It is a "poem without words," as the celebrated Greek poet Horace once said.

In hope of better understanding the rhythms of Abu Arra's visual music, let's accompany the painter in her studio in Hacettepe University in Ankara, where she is currently pursuing a master's degree in fine arts.

"Last Return" has proven enormously popular on social media platforms, drawing tens of thousands of likes, comments and shares, while countless Palestinian and Arab users have adopted the iconic image as their profile picture.

"The story of the 'Last Return' reflects the personal story of each Palestinian refugee who is languishing in the refugee camps for decades whether in the Gaza Strip and West Bank or in the diaspora-based camps, each Palestinian is envisaging every now and then to go back to the lands of historical Palestine," says Abu Arra.

Since the Palestinian Nakba took place in 1948, the Palestinian artists used to draw works on the pains of exodus and suffering forms of refuge, and it is very rare to find paintings imagining the day of return, she argued.

"Last Return," Abu Arra points out, was a bid to tell Palestinians that your big dreams for return are not only reasonable, but viable.

"I know that our dream to return is huge, and the political and international circumstances stand against us and make our life harder, but at least we have the right to dream, and once our dreams are drawn, this is the first threshold of being achieved," she adds.

Abu Arra went on to note that every single person who sees the "Last Return" is glad since he/she envisions that the scene of return "got translated into the views we have seen in the painting."

"Millions of Palestinians scattered around the world have one hope, one dream and one goal, which is to return to the historical Palestine. The 'Last Return' managed to enter the hearts of Palestinian people before their houses since it carries the dream of each Palestinian citizen looking forwards to return back to the places and villages from where they were driven out in 1948," she says.

Regarding the motives prompting her to draw this idea, she said, "Our first purpose was to emphasize that the right of return is a humanitarian right, before being a Palestinian, and this right was guaranteed by the all international legitimacies and laws."

"We also meant," she continued, "To send a message for Palestinians abroad not to forget their own cause no matter the huge attempts to make them ripped off their rights." "Here we are also redefining the Palestinian cause as not a cause resulted from the 1967 war but a genuine cause started with the 1948 events that led to the forcible evacuation of hundreds of thousands of Palestinians from the historical Palestine."

The Palestinian Right of Return is a principle that guarantees for Palestinian refugees, around 6 million, the right to return to their villages and areas from where they were forcibly driven out in the 1948 war and also protects their right to their property they left behind or were forced to leave in the lands inside the current state of Israel.

The Palestinian artist spoke in detail about the scenes she depicted in the painting and the ideas she sought to convey.

"We see in the panting that the returning Palestinians are wearing almost the same uniform their grandfathers used to dress in before the Nakba in an attempt to affirm that the Palestinian identity still present despite the decades of refuge and displacement," she said.

In the piece, we see that the children are jogging, and asked the artist if that was intentional. "They are jogging as they want to arrive first," answers Abu Arra, adding: "Since, they are more curious about seeing historical Palestine than their parents or grandfathers who already know its places, villages and each part of it."

"It is said before that the old Palestinian generation will die and the new ones will forget their cause; here we see that the children are taking the lead while returning to their homes," she affirms.

Regarding the covered faces in the painting, she said they were meant to not represent a single person and to help in a way that "each person sees him/herself as being meant by this work."

But as for the abandoned small houses we see in the painting, she said: "They tell the story that the spirit was uprooted from there as a result of the occupation since the homes are the same as people, their walls feel homesick towards their migrant owners. I do claim that homes miss their factual owners."

The people depicted are first heading to Jerusalem, and we asked Abu Arra about her message behind that. She said: "Because it is the first key for the entire Palestine, as Palestine is Jerusalem and Jerusalem is Palestine. There is no sense for Palestine if Jerusalem is absent since it's the cradle of humanity and handful of civilizations."

"Here, we see that not only the people who are returning, but also the images and fictions that were accompanying the Palestinian people while they were leaving. Here the people, the dreams and hopes are returning," she added.

"The path people are walking on gives us an impression that the dream of returning to Palestine is enduring, and no power can end that dream," she replied after we asked about the surreal dimension of the painting.

According to Abu Arra, the painting of "Last Return" had inspired thousands of Palestinian demonstrators in the Gaza Strip who are taking part in the weekly protests known as Great Return March.

"During the first weeks of the marches, I saw hundreds of Palestinians putting the painting as their profile picture in Facebook accounts, and it got shared thousands of times via the various social media platforms," she said.

She went on to assert that the Gaza-based marches prove that the drawn dream in the "Last Return" became a reality and added, "I am quite sure that the return marches would trigger soon in the West Bank and other bordering areas."

"I saw a video for a Gazan protester carrying the painting and saying we will return to Palestine. It is a proof of the Palestinian people's awakening and high-level understanding for their right of return," she emphasized.

Since March 30, thousands of Palestinians have been staging weekly protests close to the security fence with Israel.

As of the 28th Friday of the protests, at least 190 Palestinians have been killed and scores of thousands injured by the Israeli soldiers deployed close to the fence.

The protesters demand the return to the villages and areas of historical Palestine from which they were forcibly expelled in 1948, the Nakba year, to pave the way for the establishment of the Israeli state.

The Gazan demonstrators also demand the end of the Israeli decade-long air, sea and land blockade, which worsened the already miserable living standards in the coastal enclave.

* Freelance journalist who has written for Middle East Monitor, Daily Sabah and Peninsula