How far will the US-YPG partnership go? 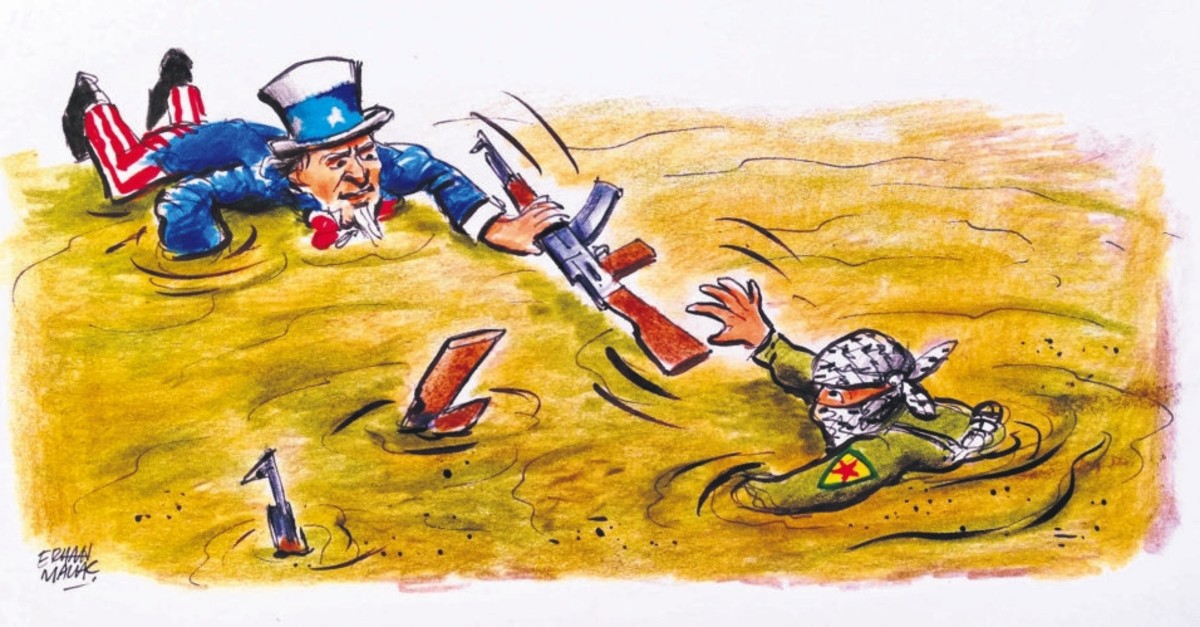 The most rational choice for the Trump administration is to stop cooperating with PKK-linked terrorist groups and look for ways to strengthen ties with regional states, especially NATO ally Turkey

In a recent letter to U.N. Secretary-General Antonio Guterres, Syria's Bashar Assad regime targeted the Syrian Democratic Forces (SDF), a front organization of the PKK and its Syrian offshoot, the People's Protection Units (YPG), for the first time and stated that it will destroy the group as it did other terrorist organizations.

The regime expressed that the SDF, which it labeled as "separatist terrorist militias," has created a de facto situation in the areas under its control on the pretext of fighting Daesh and is trying to carve out a state thereby changing the demographics of the region. The letter accused the SDF of operating in line with schemes of the U.S. and Israel and said the Syrian government will liberate territories captured by the militias and will never allow Syria to be divided.

It would be naive to assume that the letter is unrelated to the trilateral meeting of the presidents of Turkey, Russia and Iran in Istanbul the same day, the fifth summit under the Astana process.

Though Turkey severed ties with the Assad regime because of its brutal slaughter of civilians, it has always defended the territorial integrity of Syria.

In a joint statement following the meeting, the three leaders emphasized their strong commitment to the sovereignty and territorial integrity of Syria and condemned the U.S. administration's decision to recognize the annexation of the Golan Heights by Israel.

More importantly, these three leading countries have targeted the YPG/PKK presence in northeastern Syria for the first time, with such explicit language:

"We reject in this regard all attempts to create new realities on the ground under the pretext of combating terrorism, including illegitimate self-rule initiatives, and express our determination to stand against separatist agendas aimed at undermining the sovereignty and territorial integrity of Syria as well as threatening the national security of neighboring countries."

Assad condoned the PKK presence in the north for a time to concentrate on other areas and fight Daesh – and certainly to push Turkey into a tight spot as well. Of course, every side would like to use this group when there is a chance. Sadly, it's obvious that an armed terrorist group in the Middle East that can send Kurdish youth, and even children, to the front lines and have them fight and get killed is quite useful for hegemonic powers.

But the Daesh threat, which has been widely deemed "artificial," has disappeared. On the other hand, for Russia and Iran the real ally is Assad, not the YPG. Surely, the U.S. and Israel will not easily forsake the YPG project. But the U.S. has failed to legitimize the PKK/YPG despite all its efforts. As expressed in reports by the U.N. and various human rights organizations, the PKK/YPG is a terrorist group that recruits child soldiers, abducts youth to the mountains and forcefully keeps them there, and which routinely targets its Kurdish opponents and even babies.

There is no reasonable ground for carrying out an armed struggle on behalf of Kurds in Turkey – personally, I find resorting to violence utterly wrong, even when there are reasonable grounds. Among the four countries with sizable Kurdish populations, the condition of Kurds in Turkey is immensely better than those in the other three, including in the Iraqi Kurdistan Regional Government (KRG) of Nechirvan Barzani.

Most recently, the PKK killed seven Kurdish villagers in the Kulp district of Diyarbakır in an attack using an improvised explosive device (IED). It's impossible to legitimize such an organization. Even the most influential media organs and billions of dollars funneled by Gulf countries would not help achieve this.

Four key actors, namely Turkey, Russia, Iran and Assad, have adopted a similar stance against breaking up Syria into three states, and their military forces on the ground are quite competent. As President Recep Tayyip Erdoğan stated immediately after the summit, Turkey is determined to launch a military operation east of the Euphrates following a two-week monitoring period. Ankara said it will never allow delays similar to those in Manbij to occur again.

In the name of 'democracy'

Unfortunately, the Syrian civil war has shown us that Western nations preach to the world about issues like democracy but then refuse to intervene in a war that they can end, despite having both military and economic might. Instead they choose to protect their dominant positions in the international system. There appears to be no sincerity or desire to bring the Syrian war to an end. Instead, they watch for opportunities to reshape the region. With the Daesh pretext gone, why is the U.S. still supporting a terrorist group?

Why send thousands of truckloads of heavy weapons to and spend billions of dollars for a terrorist organization operating thousands of miles from its soil? Why does the U.S. refrain from defending Syria's territorial integrity? Why is the U.S. cooperating with an illegal terrorist group instead of Turkey, both a legitimate state and its NATO ally?

No legitimate or ethical answers have been offered for these questions. Undoubtedly, answers do exist, but the U.S. cannot defend them openly and maintain the support of its citizens. Certainly, when the PKK/YPG project of the U.S. collapses, apart from ethical repercussions, some will be called to account for partnering with a terrorist group and for the money spent on that project.

What will happen when it turns out that U.S. taxpayers' money was used to supply weapons to a terrorist organization and that these weapons were used against a NATO ally and were also distributed to child soldiers? Is the U.S. so lawless? Does it not have laws, a judiciary, public opinion, civil society and a media?

On the other hand, Turkey is a leading country facilitating relations with the Balkans, the Middle East and the Caucasus. The U.S., by abandoning Turkey on the issue of Syria and partnering with its enemies, has led Ankara to search for new allies like Russia. Russia has not only forced the West to back down in Georgia and in the Ukraine crisis but also forged closer ties with Ankara.

Russian President Vladimir Putin has turned Russia into a superpower again by capitalizing on the power vacuum left by the U.S. and by taking advantage of the widening rift between the U.S. and Turkey. All of this is because of the misdirected and erratic U.S. Middle East policy.

The U.S., having offended Turkey and coming close to losing its ties with Ankara, has yet to fathom the high price losing such ties will accrue. Since U.S. President Donald Trump was targeted immediately after his election, he has tried to overcome legitimacy problems with the help of the Israeli lobby. If Trump had not been pressed so relentlessly, he would have been able to take much more relevant steps regarding the Middle East and Turkey.

It appears that Russia can establish warm relations with both Israel and the Gulf nations simultaneously and can be quite rational and flexible about its foreign policy. Let's see when the U.S. will realize its mistake and give up on the PKK/YPG project, which I believe has already collapsed, and choose a rational path.