Thomas Cook and the privilege of travel 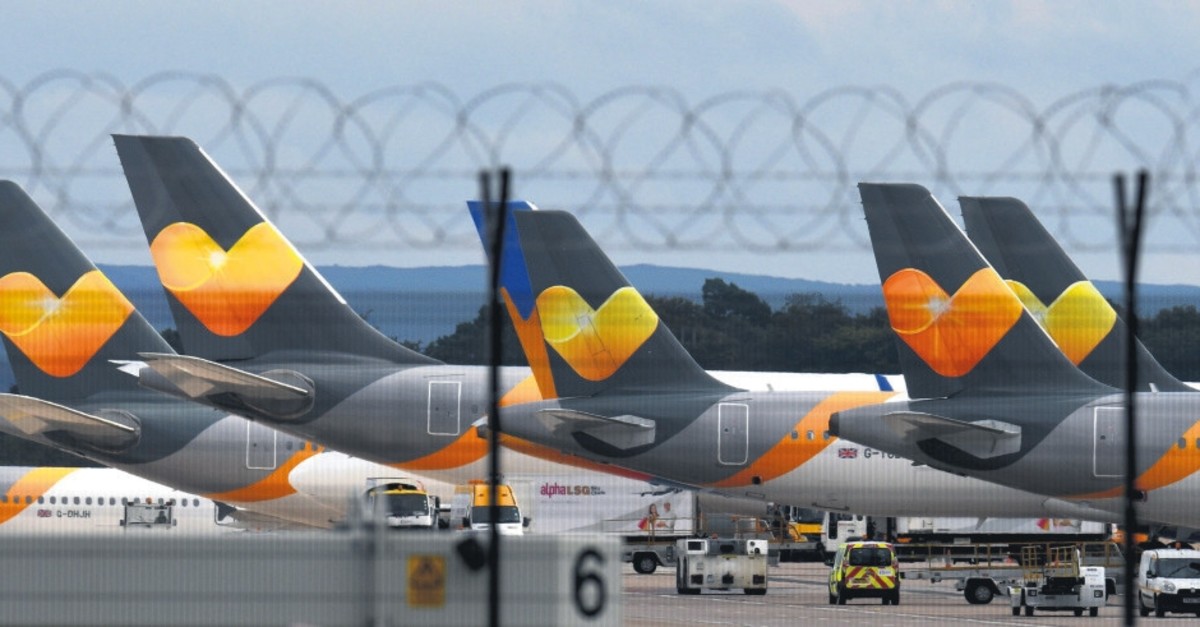 Thomas Cook logos pictured on the tailfins of the company's passenger aircraft parked on the tarmac at Manchester Airport in Manchester, after the company collapsed into bankruptcy, Sept. 23, 2019.
by Nagihan Haliloğlu Sep 26, 2019 12:10 am

On Sept. 23 I woke up early for the first day of classes and turned on BBC World to be greeted with the news that the ailing travel company Thomas Cook had gone bankrupt because of a) Brexit uncertainty b) holidays to Turkey not being as popular because of the unstable situation there. It was more entertainment than I expected from Monday morning news; I chuckled as I pondered how Turkey managed to be the cause of not only Brexit (the centrality of this you can see in the film about Dominic Cummings), but also the collapse of one of Britain's oldest companies.

I had always assumed that Thomas Cook must have a colonial connection, as all travel-related business do, and the name itself called to mind Captain Cook. I had never bothered to look him up and then today, I chanced upon a twitter thread by @afzaque that explained the history of the company. Here are two juicy titbits: "Thomas Cook & Son was also recruited by the Ottoman government for Kaiser Wilhelm II's trip to Palestine in 1898." and "Note that Thomas Cook also served as the official travel agent for Hajj services to pilgrims from British India." But the central gist of the thread is that Thomas Cook was protected by the British Empire, much like the East India Company. Given how BBC Radio explained the lay of the land, would it be too dramatic to read Brexit through the collapse of Thomas Cook, as one would read the end of the British Empire through the collapse of the East India Company?

I took my first Turkish Airlines flight in 1997 when I was 21, for a summer course in London. It was a time when travel agents were still prospering, and I remember seeing Thomas Cook shops and ads advertising holidays on the streets of Oxford and London to Turkey cheaper than what I had paid for my plane ticket. I remember doing mental math to see whether taking the bus to Bodrum and using just the return ticket for one of these holidays might actually have been the cheaper option for me. It was 1997, the EU was still a much-revered establishment, and I remember feeling somewhat flattered that many Brits I interacted with weren't sure if Turkey was part of the union or not. I remember how I would explain how we were "in negotiations."

I was otherwise quite impressed by what the Brits seemed to know about Turkey. Every other person I spoke to seemed to have visited the country (well, the beaches), not only once, but a number of times. One of these people was the always extremely tanned porter of the college I was staying at. As a result of my habit of eavesdropping to improve my colloquial English (a habit I still have today) I heard a conversation about the porter between two undergrads who were praising her commitment to the tan, saying that she took a beach holiday two to three times a year to keep it going. I had marveled at anyone taking international flights two to three times a year; a porter could not be paid that much, surely? Someone, somewhere, was clearly subsiding this porter's way of life.

On the day that I realized that Turkey had basically been sustaining one of the U.K.'s brands, I also received my first call for papers that had a little note for those who wouldn't come in person for the purposes of "minimizing air travel." It is, naturally, something laudable that conferences are providing opportunities to be "present" for those who mind how much carbon they release into the atmosphere. But coupled with the news of a company going bust that had provided cheap holidays to Brits for more than a century, traveling toward the sun releasing carbon to their hearts' content, I got more than a bit annoyed by this "awareness" that came a bit late, after the Brits had left their traces all over the world, taken all the photographs and shot all the documentaries on this battered but still beautiful planet. It called to mind all the times when British people who grew up with summers spent "on the Continent," giving them all their worldly flair, told me how they were watching their carbon footprint, how they weren't taking a "foreign" holiday this year. Saying all this to me, that irresponsible person (and I repeat, someone who boarded a flight for the first time when she was 21) who had just flown four hours to visit bookshops and libraries and the like. Very fine, British discursive shade.

It is no coincidence that this counting the carbon footprint practice started after peoples other than Western Europeans started to travel more widely. As with all things, the Germans are pretty straightforward where the Brits are discreet: I remember going to a conference in Lisbon in 2006 with my German Ph.D. cohort and one of them being horrified at seeing all the Russians and the Indians not just working in the services sector but actually holidaying. Imagine the outrage. I am sure he has not ventured more than a hundred miles from the Rhine since, declaring no doubt that he's being super environmentally conscious.

The fall out from the Thomas Cook debacle is that there are now tens of thousands of Brits stranded in various parts of the world: on the Continent that they so desperately wanted to leave; in Turkey, that they so desperately wanted to protect Britain from; and the rest of the world where they might be visiting to remind themselves of the glory days. The good news for all of us is that the British government (whatever is left of it) has taken over from yet another failed enterprise and will be repatriating the Brits in an undertaking dubbed Operation Matterhorn.