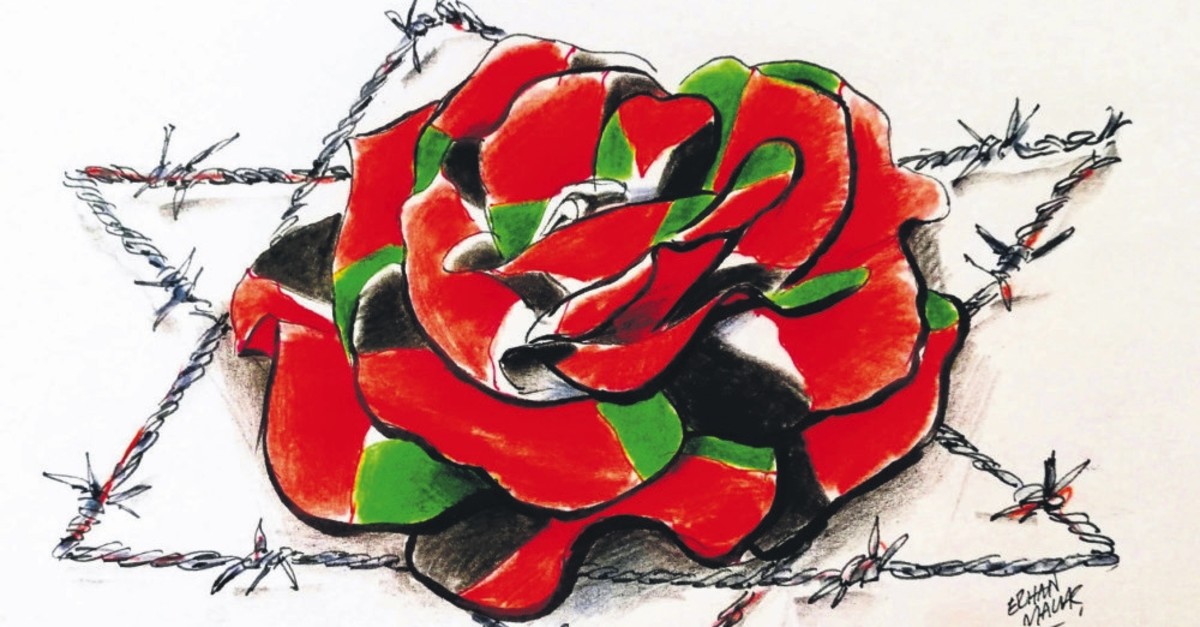 The BDS movement's aims are threefold: the end of Israel's military occupation of Arab lands; full equality for Palestinian citizens of Israel; and the right of return for Palestinian refugees forcibly expelled from their homes

The BDS is a worldwide Palestinian rights movement inspired by the anti-apartheid struggle in South Africa and the boycotts during the U.S. civil rights movement. The initiative, which stands for Boycott, Divestment and Sanctions (BDS), pushes for pressure on Israel to end its occupation, denial of Palestinian refugees' rights and system of racial discrimination, which the BDS movement argues, is akin to the South African apartheid regime.

Despite recent political setbacks in the United States and Germany, the movement has been gaining momentum on college campuses and in cultural spheres, churches, major trade unions and investment funds around the world. As a nonviolent tool to pressure Israel, the movement is still in its infancy (it was founded in 2004), and while its economic impact may be debated, the BDS is undoubtedly affecting the way Israel's human rights abuses are being talked about today.

The co-founder of the BDS movement is Omar Barghouti, a Palestinian human rights defender. Born in Qatar to a Palestinian family in 1964, at a young age he moved to Egypt, where he grew up. In 1982, he moved to the United States, where he lived for 11 years, completing a master's degree in electrical engineering from Columbia University. In 1993, he relocated to Israel following his marriage to a Palestinian citizen of Israel. He has permanent Israeli residency status and lives in Acre. Barghouti actively lobbies for a worldwide economic, cultural and academic boycott of Israel. He also has a master's degree in philosophy from Tel Aviv University.

The BDS movement's aims – as set forth in the BDS call issued in 2005 by the majority of Palestinian civil society – are threefold: the end of Israel's military occupation of Arab lands occupied since 1967; full equality for Palestinian citizens of Israel; and the right of return for Palestinian refugees forcibly expelled from their homes and land since 1947.

Among the international roster of celebrities who have lent their support to the BDS are Pink Floyd musician Roger Waters and Alice Walker, author of "The Color Purple," who withheld further editions of "The Color Purple" from being published in Israel. In September 2018, 140 artists (including six Israelis) signed an open letter endorsing a boycott of Eurovision, while in July 2019, after the Open Source Festival in Düsseldorf excluded the American rapper Talib Kweli for refusing to denounce the BDS movement, 103 artists, including Peter Gabriel, Naomi Klein and Boots Riley, signed an open letter upbraiding Germany for attempting to impose restrictions on artists who advocate Palestinian rights.

Increasingly high-principled Israelis are also among those supporting the BDS. More than 1,000 citizens of Israel, mostly Jewish, have endorsed Boycott from Within, a BDS-related call to isolate Israel's current regime of oppression.

Barghouti does a good job celebrating BDS successes, pointing out French energy conglomerate Total's refusal to invest in Israel, citing in the words of its chief executive, that Israel was too "complex" a country to invest in. Additionally, in another recent instance, in 2019 New York University decided to cancel a trip to Israel because Palestinians weren't able to participate in that study trip.

However, it often happens that entities that initially dare to stand up to Israel are forced to retreat after massive pressure is put on them, as in the case of Airbnb, which this year instituted a policy in which they would stop listing apartments in the settlements. There was a huge uproar, and Israel complained to the U.S., going to some state governors and asking for retaliatory action to be taken against Airbnb, ultimately forcing the company to retract its policy of delisting apartments in the settlements.

The Israeli position on the BDS movement is that it denies the right of Israel to exist and that it is anti-Semitic.

Barghouti strongly disputes this. "After failing to suppress the growth of BDS at the grassroots level, including among progressive Jewish communities, Israel's far-right regime has in the last few years been pushing for the adoption of a revisionist and fraudulent definition of anti-Semitism that is designed to protect Israel from censure and accountability," says Barghouti.

Israel has been actively lobbying governments around the world to prohibit the BDS movement, and in this Israel is not without success. Recently the BDS suffered setbacks in the United States, where Israeli lobbyists ensured that 27 states passed anti-BDS laws, making it illegal to call for Israeli-targeted boycotts.

"Until Trump, the U.S. never directly fought the BDS movement," points out Barghouti, "as boycotts in the U.S. are widely considered a form of expression that is protected by the First Amendment of the U.S. Constitution (the free speech amendment)."

The Israeli lobby has been even more successful in hampering the BDS movement in Germany, where no such American-style protection of free speech exists.

In December 2017, Munich passed a bill decreeing that BDS supporters may not have access to public funds or spaces. In May 2018, the State Office for the Protection of the Constitution in Baden-Württemberg called BDS a "new variation of anti-Semitism."

In September 2018, the parliament of North Rhine-Westphalia, Germany's most populous state, banned BDS and barred public institutions from hosting and supporting BDS groups, while in May 2019, the German Bundestag passed a "symbolic" non-binding resolution declaring BDS anti-Semitic and stating that it was "reminiscent of the most terrible chapter in German history."

The lower house voted down a competing motion from the far-right Alternative for Germany (AfD) party that called for BDS to be banned entirely. The Left Party refused to support the motion, but said they also rejected BDS.

So how do human rights activists around the world respond to the anti-Semitism cudgel being used to silence the BDS movement?

"These are attacks on the right to freedom of expression," said Saleh Higazi, Amnesty International's Deputy Regional Director for MENA. "The right of freedom of expression is at the core of civil and political rights. People should be free to call for boycotts and to participate in boycotts. Banning them goes against human rights, and it goes against the commitments and obligations of these countries."

One of the things that are often debated about the BDS is the economic impact of the movement, which opponents tend to downplay.

According to Barghouti, however, "When BDS impact is debated the most significant indicators of impact are often in the economic sphere."

Barghouti draws attention to the Rand Corporation prediction in 2015 that "if there is no solution and BDS gains traction, it may cost Israel up to 2% of its GDP." Israel's GDP has gone up since, so in today's figures, 2% would amount to approximately $6 billion a year or $60 billion in 10 years.

Barghouti furthermore refers to the CEO of Clarity Capital, a New York and Tel Aviv based investment management firm, who recently argued that if BDS "succeeds in getting 25% of European consumers to boycott Israeli products," that "would represent a 2.8% drop in Israeli GDP. As Israel's current GDP growth rate is 2.5%, this would push Israel into recession."

Despite Barghouti's hyping up of BDS' economic impact, outside observers generally tend to minimize this aspect of the movement's activities.

"Campaigns seeking economic impact are a crucial part of BDS, but their results should not be the only measure of success when looking at the movement," says Higazi. "In my view, putting human rights and international law front and center and helping people see the Palestinian struggle through this lens is a great success."

The real achievement of BDS seems to be in framing the debate regarding Israel's treatment of Palestinians and influencing public opinion, as more and more people, particularly in the U.S., are becoming critical of Israel. This began in 2010, with the Gaza Flotilla, when Israelis killed nine activists in an event that became a kind of rallying cry for the BDS movement and helped to galvanize support, as did Israel's human rights violations in Gaza, which turned many Jews on to BDS as well, says Barghouti.

"Jewish support for BDS has grown exponentially since Israel's massacre in Gaza in 2014, with Jewish Voice for Peace officially declaring its full endorsement of BDS in 2015," says Barghouti. "Even as early as 2014, Jewish millennials' support for BDS was considered as a major problem for Israel."

While many politicians in America still speak glowingly of Israel, you have people like Bernie Sanders, Ilhan Omar and Rashida Tlaib, who talk in a different, more critical tone. This is clearly ringing alarm bells in Israel.

"Israel sees BDS as a strategic threat and is combating it as such both in and out of the country," says Higazi. "This can point to a couple of things: first, that BDS is having an impact. But it also means that there are more attacks against activists and their space for action is aggressively shrinking. There are very worrying trends that we see unfolding. So it is very important today that we continue to expose attacks and attempts to shut down free speech."

"Since 2015, Israel has dedicated an entire government ministry, with tens of millions of dollars in budget per year, for its war on BDS," says Barghouti. "Israel lobby groups, led by AIPAC (the American Israel Public Affairs Committee), have been fighting BDS as a 'top priority.' These facts alone should be sufficient to attest to the movement's impact."

"BDS is a human rights movement on the rise," concluded Higazi. "But whether people subscribe to this form of campaigning or not, I believe that we should all stand for 'the right to BDS' and ensure that it remains protected freedom of expression."

* American writer and journalist based in Istanbul