Thank you Mr. President, Palestinians will not forget these images 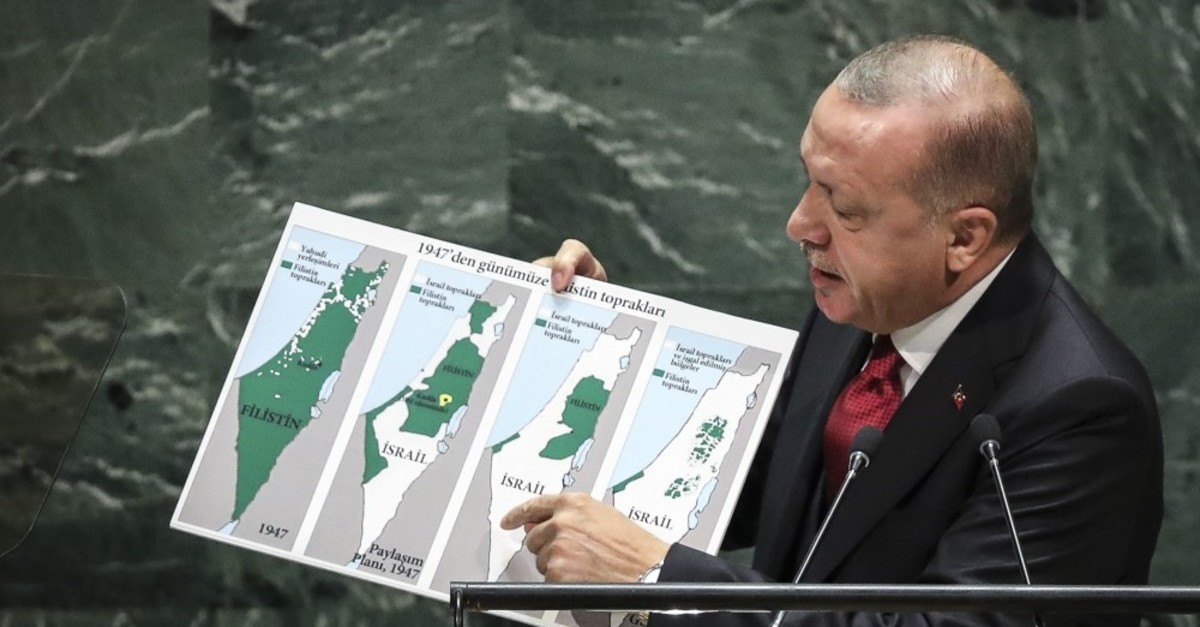 President Recep Tayyip Erdou011fan holds up a map showing the Israeli occupation of Palestinian territories since 1947 as he addresses to the United Nations General Assembly at U.N. headquarters, New York, Sept. 24, 2019.
by Ali Abo Rezeg Sep 27, 2019 2:31 am

In front of world leaders and scores of state officials from around the globe, President Erdoğan managed not only to speak on behalf of the Palestinians, but he also redefined the origin of the crisis for the U.N.

President Recep Tayyip Erdoğan was inspiring as he held up to the world the past and present maps of Palestine during his speech at the U.N. The first map depicted Palestine before being occupied by Zionist gangs in the early months of 1948, following dozens of massacres that left thousands of Palestinians dead and hundreds of thousands displaced.

In front of a handful of world leaders and scores of state officials from around the globe, the Turkish president managed not only to speak on behalf of the Palestinians, but he also redefined the origin of the crisis for the U.N., the biggest international political platform.

Erdoğan said the conflict had much to do with the Israeli occupation and its expansionist policies, which always come at the expense of innocent Palestinians.

The maps summarized the Palestinian cause on three levels: the Palestinians' right to return to the land of their forefathers, Israeli expansionist policies, its bids to annex the entire West Bank and the unrealistic two-state solution.

Firstly, the mainstream media has for decades addressed the Palestinian issue as something that dates back to the 1967 Arab-Israel war by ignoring, wittingly or unwittingly, that the conflict had surfaced in 1948 and even three decades before in 1917 when the British government voiced support for a "national home for the Jewish people" in the Ottoman region of Palestine, later known as the Balfour Declaration.

The maps' focus on 1948 as the flashpoint indirectly reaffirms the rights of people who were extremely affected by the war and have since been scattered throughout 58 official refugee camps in three Arab countries, the Gaza Strip and the West Bank.

Aside from the Palestinian refugees' right of return, the photos depicted Israel's endless bid to grab Palestinian lands over the last seven decades, which led the Turkish president to question how far Israel will continue to expand.

Intending to devour more Palestinian lands, Israeli Prime Minister Benjamin Netanyahu recently pledged to annex the current settlements, which may cut the already torn West Bank and may leave its people living in no more than cantons.

The third photo indicated that Israeli policies in the occupied territories are no more than an ongoing policy to geographically divide the blockaded Gaza Strip from the West Bank. The Palestinian people have been struggling for decades to combine the two Palestinian parts to help in the establishment of a future Palestinian state as part of the proposed two-state solution. The Gaza Strip appeared in the photo as extremely isolated from the heart of any hopeful Palestinian state and the swathes of land that remained of the West Bank appear scattered and dispersed with no territorial unity. This makes the infamous two-state solution unrealistic after Israeli leaders buried any prospect of it.

President Erdoğan's efforts to unmask the ugly face of Israel are appreciated and welcome. Nothing in this world is better than being the voice of the voiceless, oppressed and aggrieved. Palestinians will not forget these images, especially after seeing their deteriorating map featured at the largest political platform in the world.