Not Brexit, but Scottish independence could break up UK 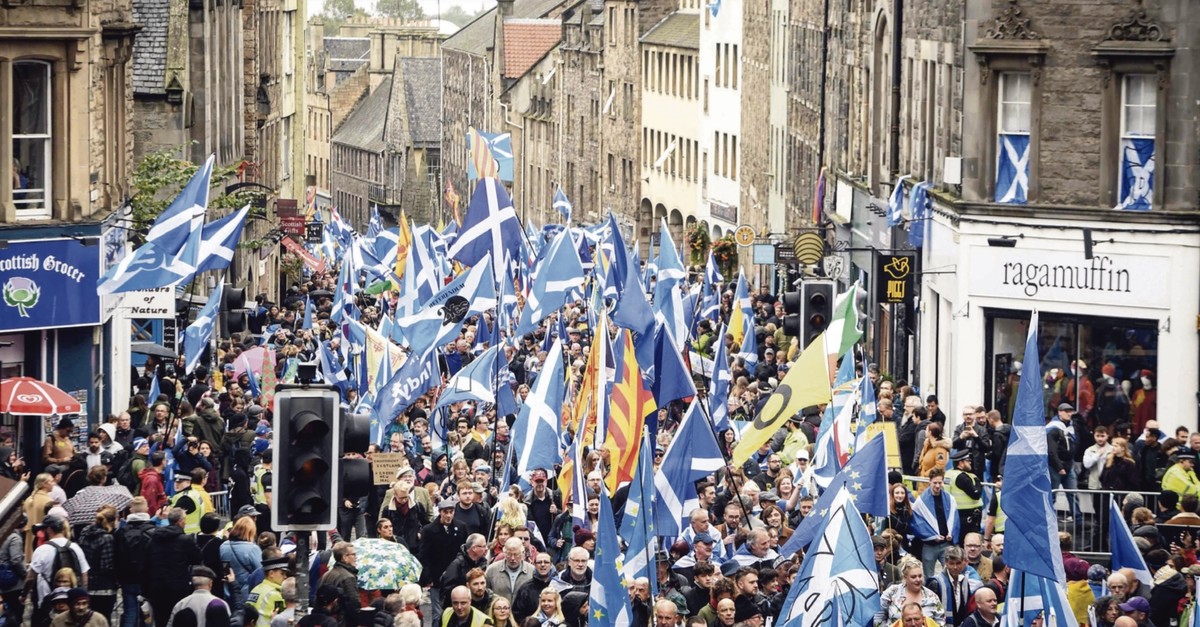 Pro-independence activists wave Scottish Saltire flags as they march from Holyrood to the Meadows in Edinburgh, Scotland, Oct. 5, 2019. (AFP Photo)
by Jurgens Klaus Oct 11, 2019 12:24 am

Welcome to Scottish Borders" reads the sign on the A68 road the moment we leave Northumberland in England. It is a highly frequented, famous scenic route for motorists heading for Scotland, having joined the thoroughfare from the north-eastern gateway of Newcastle or, for example, the port city of Hull further south. Yet there is no border as such – Scottish Borders is the name of one of Scotland's 32 council areas. However, almost every first-time passerby will for sure stop the car or get off their tour bus and take a photo of two rather impressive rocks: One adorned with the word England, the other with the word Scotland, respectively, depending on which direction you are traveling.

Once up here, on that often a rather windy stretch of land, travelers first and foremost marvel at the beautiful scenery. Yet upon reflection, one might recall that in the past both peoples were engaged in lengthy battles and wars. Then there came peace and prosperity, and eventually the U.K.

But today there is a fresh attempt at parting ways: So, what makes the citizens living in Scotland want to break away from the rest of that very U.K.?

As is the case with all demonstrations and public gatherings numbers differ according to whom you speak. Organizers would, by habit, inflate the figures while local authorities and police tend to put out a more realistic figure. Let us thus say many tens of thousands of peaceful demonstrators took to the streets of Edinburgh last Saturday, Oct. 5.

What had been billed as the fourth and final event in a miniseries after Glasgow, Aberdeen and Perth was meant to be a manifestation of the will of the Scottish people to being given the chance for a second referendum about Scottish independence from the rest of the U.K. All Under One Banner (AUOB) is the catchy name of the movement staging these protests.

As the issue is about a second referendum, one feels inclined to ask "what went wrong with the first?" Back in September 2014, the Scottish population had the chance to declare their interest in either staying within the U.K. or opting out. The result was a big blow for all those favoring independence, as a reasonably clear majority voted against leaving (55.3% versus 44.7%). The referendum was the culmination of a process of devolution which had begun earlier including returning many law-making facilities to a newly formed Scottish Parliament in 1999. Exactly that devolution granted by London was apparently not sufficient enough and in particular, the Scottish National Party (SNP) pushed for a complete break.

But the government in Westminster made it very clear from the onset that granting that right to break away was a once in a generation affair and not something that could be repeated year after year until the outcome would suit those in favor of independence.

But in between September 2014 and today, another referendum was held – the Brexit vote of 2016. The SNP has argued ever since that this is a new quality, a change in the legal framework compared to the conditions under which the first Scottish independence referendum was held.

As will be written one day in the history books, then Prime Minister David Cameron gambled away his own political career by allowing the Brexit referendum, hoping that a majority would vote "Remain" and thereby silence all euroskeptics in his own Conservative Party and staying on, not only as prime minister, but also staying in the EU. If only the views of his Scottish electorate, 62% of who ticked the pro-EU membership boxes, were similar to those of the rest of the country.

In this light and ever since the fateful summer of that referendum year, Scottish First Minister Nicola Sturgeon (SNP) has mulled over proposals for a rerun of her independence referendum. The key argument at stake: The U.K. is about to leave the EU and as this is a new legal quality and as her constituents voted by a large margin to remain in the EU, only a second independence referendum is a solution. So one must be frank in commenting about her position – Mrs. Sturgeon wanted to part ways with the rest of the U.K. Her plan failed. Post-Brexit referendum she still wants to break away yet stay in the EU. Without a Brexit referendum chances for another independence vote were slim, to put it mildly. So for her SNP, Brexit could become the catalyst to finally achieve their ultimate goal.

CAUGHT BETWEEN FANTASY AND REALITY

As of late, nothing can be taken for granted anymore in British politics. The most recent case in point is the possibility of Prime Minister Boris Johnson indeed asking Brussels for another extension although he denies just that on a daily basis. Crystal ball manufacturers should have eyed the U.K. market much sooner and would have made a fortune for sure.

Hence and although equally denied on a regular basis, it is not entirely impossible that Westminster grants the Scottish electorate another trip to the ballot box, most likely hoping that it will be defeated thus ending the debate for good.

Current opinion polls put "leave the U.K." voters between 49% and 52% respectively, thus a certain up from 2014. However, there are still many undecided voters and no one can be certain whether leave or remain will win. So let us take a look at the hard facts. According to Eurostat, in

Hence observers could argue that the Scottish economy has transformed itself from mainly food, agriculture and oil into a true knowledge-based economy with an average per capita GDP almost that of the rest of the U.K.

The trouble is how would this situation develop after leaving the U.K.? Would there be tariffs between Scotland and the rest of the U.K.? What about keeping the pound as its currency or going after the euro? What would happen to financial subsidies either arriving straight from London or indirectly from the EU? Assuming the U.K. is leaving the EU at a certain point in the near future and Scotland becomes independent how long would it take to arrange for (free) trade agreements with the rest of the world and without London as a backup? What about passports and visa regimes, what about freedom of movement?

Having written this there are of course further overarching topics that need urgent attention from the side of independence supporters. If their wish is to stay in the EU they would need to be reminded that EU membership was granted for once per automatic system – German reunification.

The same is suggested would occur once the North and the South of Cyprus were reunified. However, those scenarios are unifications and not split-ups.

But then there are even wider implications. Could a breakaway lead Wales and Northern Ireland to walk the same way? What about a hard border between England and Scotland, and a hard sea border between Northern Ireland and Scotland? What about the current level of foreign investment arriving on Scottish soil? What about migration and what would the future workforce look like? What about a separate seat in the U.N.? And above all else, what about the future of the EU as we know it today, which territory would follow suit and turn today's EU into a grouping of not 27, but many dozens of small nations and regions all aiming at being independent? What would the impacts be on peace and stability on the continent?

"Welcome to Scottish Borders" reads the sign, as mentioned in my first paragraph. The one thing no one can imagine if that the sign would read "Welcome to Scotland – passport control to the right."