Saying no to terror: UEFA and the Turkish national team 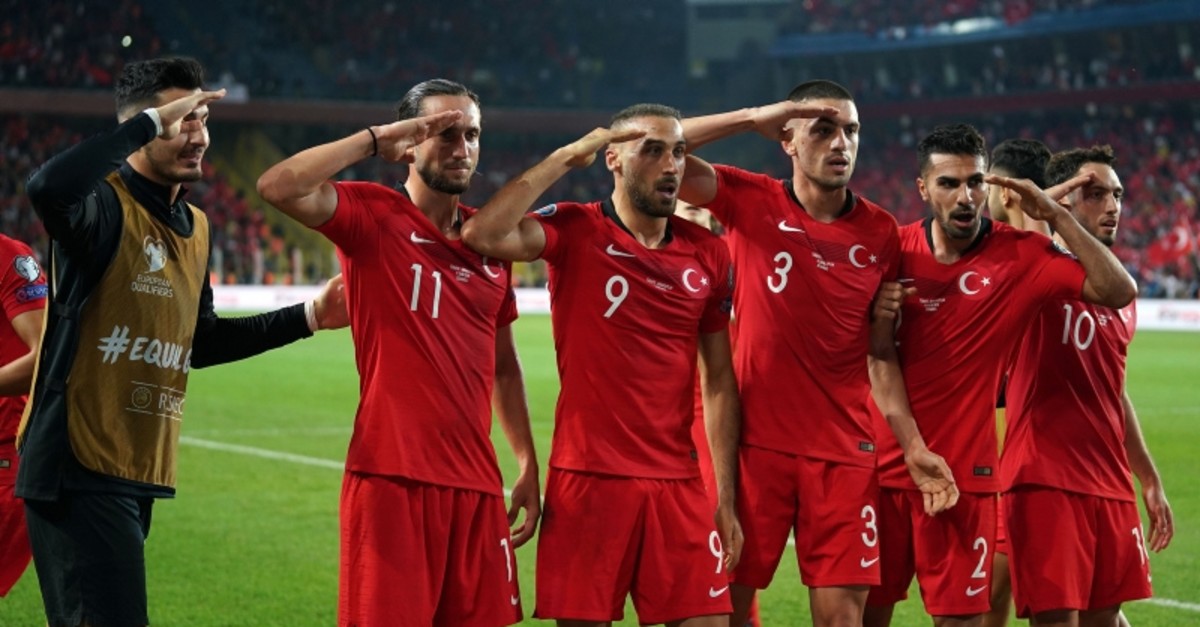 Turkish national team celebrates their last-minute goal against Albania in a Euro 2020 qualifier match by giving a military salute in support of the ongoing Turkish counterterrorism operation in Syria, u015eu00fckru00fc Sarau00e7ou011flu Stadium, Istanbul, Oct. 11, 2019
by Batuhan Takış Oct 15, 2019 3:13 am

When it comes to common threats that affect the world, such as terrorism and racism, we must be one and stand united against it regardless of its region

European football's governing body UEFA warned on Saturday that they will "examine" reports that the footballers of the Turkish national team gave a military-salute in their Euro 2020 qualifier against Albania to show their support for the ongoing Turkish counterterrorism operation in northern Syria.

The press chief of UEFA, Philip Townsend, told the Italian Ansa news agency that he personally did not see the gesture "which could be a provocation." After their 1-0 victory on Friday night, the Turkish football team's official Twitter account posted a photo with the whole squad saluting in the dressing room to "dedicate their victory to our brave soldiers and fellow martyrs."

That picture must have disturbed Townsend, who repeated a question that he was asked, "Does the regulation prohibit references to politics and religion?"

"Yes, and I can guarantee you that we will look at this situation."

Just in case Townsend hasn't had a chance to look at the disciplinary principles of UEFA, here is the regulation he is accusing the Turkish national team of breaking.

Article 16, 2 (e) of UEFA's disciplinary proceedings manual states, "The use of gestures, words, objects or any other means to transmit a provocative message that is not fit for a sports event, particularly provocative messages that are of a political, ideological, religious or offensive nature."

Unaware of the meaning of a salute, Townsend must have thought that the footballers sent a "political" or "ideological" message to Turkey, as both terms are strictly prohibited by UEFA regulations.

Brief info for him: The message of the salute is a bit different indeed. One of the primary goals of sports events is to be a platform where we can unitedly raise our voices against the world's common challenges such as racism, xenophobia or terrorism.

No matter our race, religion or ethnicity, whenever a racist or terror attack claims innocent lives in any corner of the world, we must be one, condemn it and stand against it.

In this regard, UEFA has been one of the prominent global voice that gives a worldwide chance for unity and equality through its events and advertisements.

UEFA's "No to Racism" campaign, as a particular example, has greatly contributed to tackling the common threat of racism. As a matter of fact, it has been more effective than political campaigns or nongovernmental projects carried out throughout the world, including in Turkey.

Terror can neither be different than racism nor can it be something a state can ignore or escape, especially when it directly leads to the massacre of its civilians. What the Turkish military is undertaking along the Syrian border is solely an endeavor to eliminate terrorist groups to provide peace and security for the entire region.

In light of this reality, the salute, given after Turkish striker Cenk Tosun's winning goal in the game in Istanbul, was more than legal and was moral-based support to a very legitimate Turkish campaign in northern Syria.

UEFA's top official may not be aware of the limits of the danger posed against the safety and welfare of Turkish and Kurdish citizens in the region; he may not have heard about the deaths of the innocent children killed in attacks by the PKK-linked groups. However, UEFA, a globally influential voice of our common problems, must be aware of this and it should further its famous anti-racism campaign to include anti-terror as well.

Rather than "examining" the Turkish team's salute, which was seemingly misunderstood by its press chief, UEFA should examine its share in anti-terror campaigns and join the Turkish efforts against the notorious monsters in northern Syria. Condemning terrorism, which tops the list of common problems just like racism, shouldn't be so hard to do.

Considering the spreading bloodshed across the world, particularly in the Middle East and currently, in northern Syria, it is time for both UEFA and other influential global associations to get united and say no to terror, including PKK terrorism.