Why the 2019 Nobel Prize in economics matters 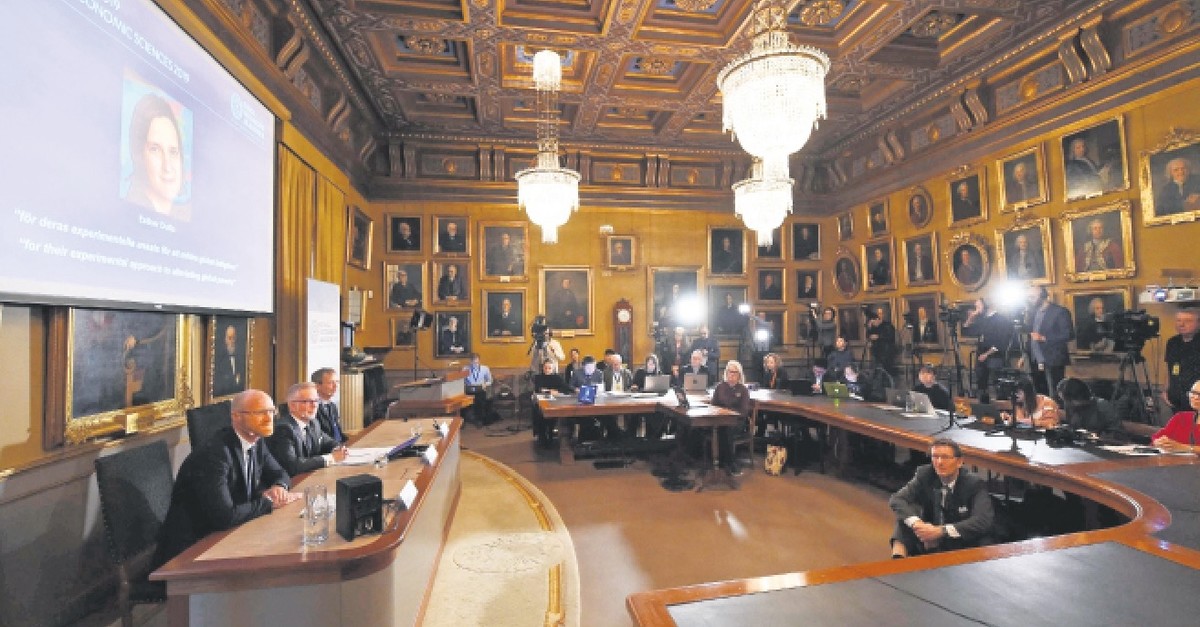 The members of the Nobel Economic Sciences Prize Committee for 2019 during a press conference at the Royal Swedish Academy of Sciences in Stockholm, Sweden, Oct. 14, 2019.
by Usman Masood Oct 21, 2019 1:45 am

An economist wouldn't take a bow to anyone but another economist perhaps – and only if the need is indeed there. In his book, the "General Theory," John Maynard Keynes contended, "Practical men who believe themselves to be quite exempt from any intellectual influence are usually the slaves of some defunct economist."

To isolate the rhetorical transgression here from his intended message is a semantic impossibility. But what is clear is how economists, whether or not they are defunct, have been wearing this on their sleeves ever since.

Unsurprisingly, thus, economics has been a closed space. Where rigor has helped it become sharper and earn a more privileged position among the social sciences, obsession with the same has cost the field a kind of stagnation – difficult to see from within an economist's worldview.

Interdisciplinary research has merely started being accommodated. Of course, the people in the business of transforming this soft into a hard science take deep offense to articles like this, abounding in words but scarce in matter (read: numbers). To them it must be like an amateur social scientist whining about their own exclusion from the much-privileged space of economists.

But on the horizon of what Thomas Carlyle termed as a "dismal science," there seems to be a glimmer of hope. It's almost like economics is rising from the ashes. There is a genuine desire within the field for a shift from the platitudes of trying to explain everything in broad strokes, to a more down-to-earth approach to the actual problems facing the world.

The Nobel Memorial Prize in Economic Sciences, 2019, going to Esther Duflo, Abhijit Banerjee and Michael Kremer, is fantastic, disruptive and exciting – almost like elitist economics being defeated by the ordinary, poor woman, but this time on the back of robust – and for economists, indeed palatable – evidence.

The main thrust of their research, especially for Banerjee and Duflo (apparently a happily married economist couple!) is that grand theories trying to explain everything with simplistic models are wrong and there is no magic pill to end poverty. Relatively modest goals, which aim to make lives less miserable for the poor dimension-by-dimension, are achievable as well as measurable. Social scientists need to develop empathetic understanding of the problems facing the poor and generate solutions accordingly, but one at a time.

"Free markets for the poor" or any other one-size-fits-all formula, do not work.

To develop the crucial understanding of what actually works in development, they pioneered and popularized the use of Randomized Controlled Trials (RCTs) in economics, and more than anything else, the coveted prize went to the trio for this methodological innovation. RCTs have long been in use in the field of medicine, and are also called clinical trials. A treatment group, for instance, would be given a drug, which the control group would be given only a fake (placebo) of, in order to tease out the effectiveness of the drug under study.

RCTs, carried out by economists in the field check for the effect of an intervention – for example, cash transfers – on outcomes of interest – say, happiness levels – sophisticatedly controlling for other factors which may affect individual happiness.

Consider the debate around insecticide-treated bed nets. Every fourth child in Kenya dies as a result of malaria. Bed nets could reduce child mortality rates by 20%, but still only 5% children are able to sleep under a bed net in Kenya, which the poor find too expensive.

Unsurprisingly, economists like Jeffrey Sachs favor free provision of bed nets, because, according to them, it's less costly. If more people get malaria, much more people will catch the disease as it spreads, imposing greater overall costs. Hence, it is a supply-side issue. More bed nets would mean less malaria.

The other camp, among them the respected development economist, William Easterly, argues that free bed nets are destined to be wasted. If people are not ready to pay for them, it signals they do not value the bed nets enough. This casts it as a demand-side issue. No matter how many bed nets you provide, unless people appreciate their importance, they are unlikely to use them.

So should the policymakers be left guessing when experts are – ironically – in such a well-reasoned disagreement?

Pascaline Dupas, and Jessica Cohen, affiliated with MIT's Abdul Latif Jameel Poverty Action Lab (J-PAL), sought out to solve this mystery by doing a field experiment – an RCT. They distributed bed nets to some people for free. Some people were given the same bed nets for a small price. Data was then collected periodically.

What they found was that the usage rate for bed nets was more or less the same among those who had paid and those who had not. Thus, according to the evidence it turned out that free bed nets was an effective strategy to fight malaria. The disease, which is estimated to have resulted in the deaths of 50 billion people – almost half of the historic human population – could be tackled with an intervention as cheap as bed nets. But we have to be sure, and this is where the RCTs come in.

The trio, alongside many other social scientists now, have been running experiments on all things ranging from the best intervention to increase children's attendance in schools, and poor voter turnout in elections, to the effects of data transparency on corruption, and savings decisions of farmers.

Not just that, when they run these experiments, which can last from months to years, the poor participants directly benefit from these interventions – if your village is lucky enough to end up in the intervention group rather than the control (which highlights a pitfall of RCTs which somewhat do treat human beings as lab rats! But then it's not a perfect world).

The allusively-titled book of Banerjee and Duflo, "Poor Economics," is full of examples of many smart RCTs, and a required reading for anyone interested in understanding poverty – until we could get our hands on to their upcoming book to be launched next month, "Good Economics for Hard Times."

The work of Banerjee, Duflo and Kremer is hugely influential. Development economics now has a huge corpus of literature entirely based on RCTs. But what is perhaps even more important is three years after the award went to Angus Deaton, the Nobel Prize has again been announced for cutting-edge poverty research. In a somewhat similar vein, the 2017 prize to Richard Thaler, and the 2002 prize to Daniel Kahnemann – a psychologist by training – is encouraging. Their works put the assumption of human beings as "rational" into question – a basic foundation of almost all economic models. They even favored a greater role for governments in "nudging" behaviors in socially desirable directions; which, by the way, is blasphemous in an economics department where lampooning the government 24/7 is considered chic. These Nobel Prizes indicate a growing openness, and acceptance for more heterodox approaches in the field.

Of course, even today, there are many, pure, down-to-the-core economists, for whom this stuff is alien. Poverty, per se, does not fascinate them. They get frustrated with any discussions of irrationality, because – in their way of seeing it – people don't understand what they had meant by "rationality" in the first place. Their interests lie with theory, in models of economic behavior, of endowments and of constraints that rational humans are faced with, in business cycles, and economic growth, or in smart stuff like modelling uncertainty and the games people play. To them, mavericks trying to help the poor out in the field with experiments is just another fad that will pass. For them the Nobel Prize this year is profoundly unsettling!

But the verdict has nevertheless been given – by the most eminent of economists that make up the jury. It comes with a growing number of publications in the most-respected economics journals on inequalities, poverty, rationality, climate change, and other rather alternative issues in, and approaches to, socio-economic problems (but still with lots of math, which honestly, sans the arrogance of our lot, is not all that bad). Thus, the tacit – but somehow shared – realization among economists, is nudging the field toward a greater emphasis on a more judicious allocation of resources, which is remarkable and should be welcome.

Perhaps the common man has a reason to celebrate the Nobel Memorial Prize in Economic Sciences today. The palatial halls, the majestic suits, the grandiloquent symphonies, are still far away from his rugged world, where he wages a war of survival every day. But his existence is no longer being ignored in a field which should have ideally been about his plight from the very start.

* Lecturer in the Department of Social Sciences at SZABIST University, Islamabad, and currently pursuing a Ph.D. in economics at Ibn Haldun University, Istanbul