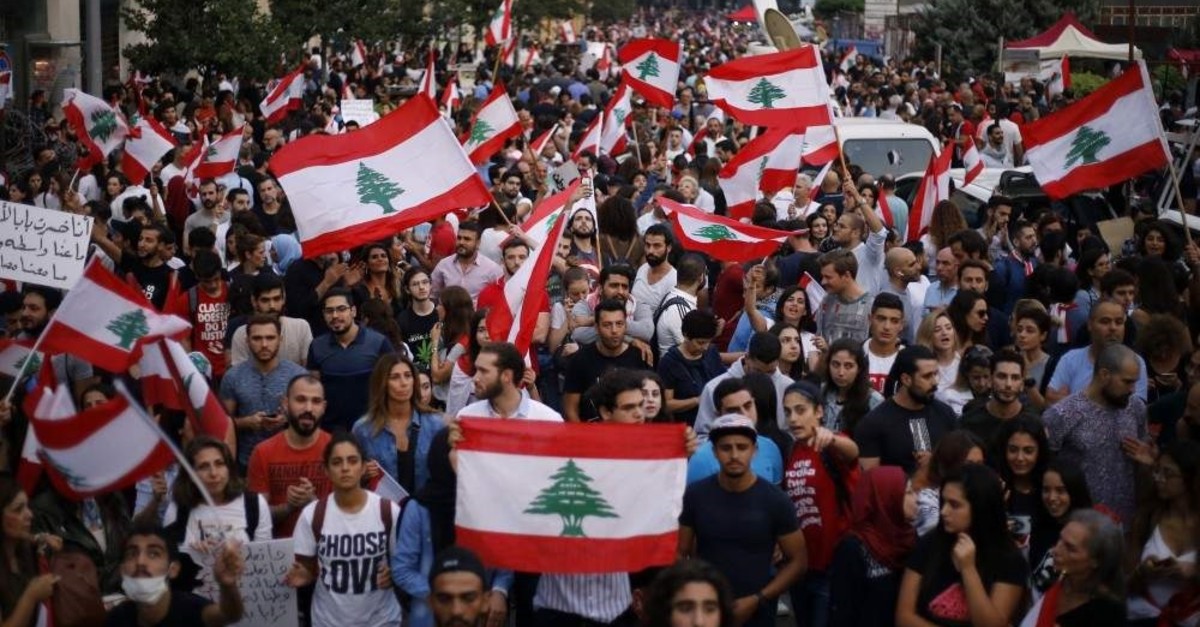 Demonstrators chant slogans against the Lebanese government as they hold Lebanese national flags during a protest in Beirut, Lebanon, Oct. 26, 2019. AP
by Ali Abo Rezeg Oct 28, 2019 12:32 am

The Lebanese people are united against corruption, nepotism and favoritism, and their peaceful protests could become a turning point in the country's history

It is rare to see Lebanese people from different sects, religions and ethnicities come together in one place, chanting one slogan and being unified behind one demand.
Lebanon, a country with 18 sects, has been experiencing one of its largest ever protests, the largest since the assassination of former Prime Minister Rafik Hariri in 2004, the incident that divided the country into two camps, the March 14th Forces and the March 8th Forces.
For more than a week the Lebanese have filled streets and squares calling for the removal of the regime that emerged with the Taif Agreement in 1989. The Saudi-backed Taif Agreement was derived at the time to put an end to the years-long civil war among Lebanon’s sects by asserting on the “mutual coexistence between Lebanon's different sects and their proper political representation."
Commenting on these events, many Lebanese experts noted that the Lebanese people had become fed up with sectarianism and rushed to the streets to stem the decades-long political system that brought nothing but poverty, unemployment and high debt ratios to their country.
We can understand that the Lebanese people are extremely united these days as never in the past, but that doesn’t mean that the protests have reached a level uniting all against sectarianism.
However, the Lebanese are united against corruption, nepotism and favoritism, and their peaceful protests may become a turning point in the country’s history only if they culminate in holding corrupt politicians accountable and introducing a new political system instead of sectarian-based ones.
But, while addressing the Lebanese protests, we have to bear in mind that the situation is much more complicated than we expect. It is a political scene where the Lebanese are not allowed to decide their own fate since the country became an arena for the Iranian-Saudi rivalry in the region. An indication of this was when Lebanese Prime Minister Saad Hariri was forced last year by the Saudis to resign from his post while on an official visit to Riyadh.
Hence, these protests are not against sectarianism, they are directed against the government’s corruption and the failure of consecutive governments to solve the major problems of poverty, electricity and water.
Also, many banners are being raised calling for the resignation of the government and new parliamentary elections to be announced soon. Although I think any snap elections will bring nothing but the same faces into government, given the complexity of the Lebanese political system.
These protests, however, could be used as an advantage by the Lebanese people to get rid of their obsolete political system, which has caused ongoing suffering, by calling for a national conference where a new political system may be discussed to save the country and take it out of its infamous heritage of sectarianism.
The current political system is full of preferential policies that are allocated to only serve the 18 sects. These preferential policies are only advantageous for the historical leaders and prominent families of these sects, which makes the ordinary people predominantly deprived of having their rights in genuine political representation. It is easy to find that when you go back to the names of the candidates for the latest parliamentary elections. The names of the candidates are either the sons, daughters or wives of the historical political elite.
No doubt it is a decisive moment in Lebanon’s political history, since we have a rare chance in which the people may manage to decide their own fate for themselves.
* Ph.D. student in Yıldırım Beyazıt University's Department of International Relations