Institutionalization of a pragmatic discourse: The Arab League 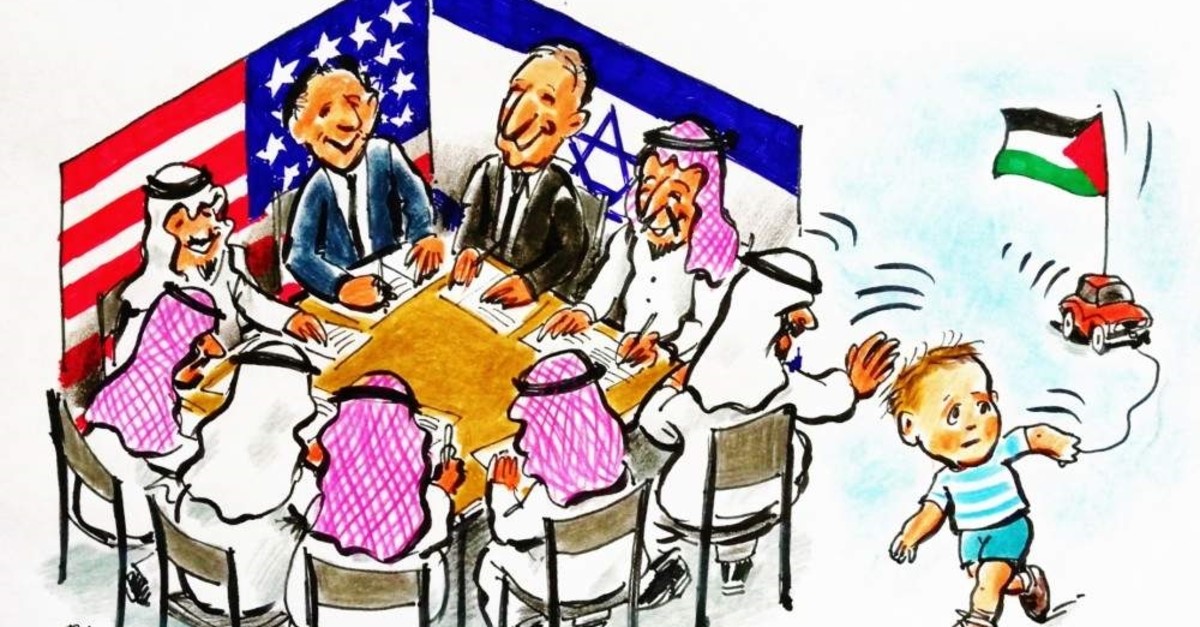 The fundamental problem with emerging nation states in the Middle East following World War I was the issue of offering their citizens identities that would also provide a basis for the legitimacy of their rule.

Under mandate regimes, this job was mainly accomplished by creating distinctly secular and nationalist identities. But the new borders drawn by major powers in line with realpolitik concerns largely conflicted with the socio-political realities within the region. In addition, local policies in Syria and Iraq, particularly regarding the Palestine problem, deepened the distrust in both Western powers and Arab politicians who were in some way cooperating with them.

The main mobilizing ideology in the Middle East during the interwar period between the two world wars was nationalism. Arab leaders who managed to properly consolidate ideologies with different variations could achieve the independence of their countries, becoming the official rulers in the following process.

The Wafd Party in Egypt, the National Bloc in Syria and the top elites in Iraq, including Nuri Said Pasha and the representatives of the Hashemite monarchy, had all constituted a common prototype that shared a certain worldview, received education in Ottoman military schools, had a pragmatic perspective and successfully harnessed populist nationalism.

Although they led their countries to independence, the fact that most of them had pursued their own interests and also maintained good relations with European powers during the post-independence process caused their popular support to largely fade.

In short, many of the newly independent Arab states in the post-mandate period were ruled by troubled governments that sought legitimacy at home and failed to place identity policies on sound foundations.

The fundamental problem within the Arab Middle East during the second half of the 20th century was shaped by an identity-driven issue of belonging while the “callous” politicians of the old order were no longer seen as reliable figures.

Hence, the organization named The Arab League, which was formed by Egypt, Syria, Iraq, Lebanon, Jordan, Saudi Arabia and Yemen – signatories of the “Alexandria Protocol” in October 1944 – resulted from a desire to solve domestic legitimacy problems of Arab states through a common goal in foreign policy that would unite all. In foreign policy, this goal emerged as the Palestine problem. During that period, the only issue that allowed Arab states to develop a common rhetoric in foreign policy was hostility toward Israel.

The Palestine problem, which had become visible with the acceleration of Jewish immigration to the region under the British mandate, soon turned into a vital issue for Arab states in general, and Syria and Egypt in particular.

Though they were divided into various nation states and faiths, the possibility of the establishment of a non-Arab entity in Palestine was unacceptable for Arab peoples.

Hence, for the leaders of new Arab states, the Palestine problem went beyond a security threat in foreign policy, as no such threat was in question at the time. It functioned as a cause showing that they were paying attention to their citizens’ concerns and helped them assume leadership among Arab states.

The Arab League emerged as a platform where Arab states could express their protests over the Palestine problem. For a long time, the organization had served mainly as an outlet for issuing counter-statements regarding the issue.

Britain’s withdrawal from Palestine in 1948 and the establishment of Israel immediately afterward led to the conflict known as the First Arab-Israeli War. Among the member states, Iraq, Egypt, Jordan and Syria sent troops to Palestine but the campaign resulted in Nakba, meaning "disaster," which is still remembered by Arabs today.

Though its original goal was to urge all Arab states to take up a coordinated stance, the Arab League failed to display uniform action during the war and the interests of member states frequently took precedence over the organization and Palestinians. Jordanian King Abdullah’s declaration that he would not enter the war unless given “command over all the Arab forces” was an example of this.

While on a realpolitik level, the Arab League had been organized as a body intended to serve domestic politics, this changed to some extent during the 1950s. Above all, it was the era of Nasserism.

The vision of a Pan-Arab union was derived from a modern nationalist movement whose origins could be traced back to the mid-19th century, and it appeared that for the first time, a leader with a capacity to apply it actively through politics had emerged.

Similar to the wave of revolutions in continental Europe unleashed by Napoleon’s revolution, the charisma of Gamal Abdel Nasser, who overthrew the monarchy in Egypt and founded a republican regime, quickly engulfed other Arab states. During that period, Nasser was trying to transform the Arab League into a functional instrument for the advancement of the Palestinian cause.

The founding of the Palestine Liberation Organization (PLO) in Cairo in 1964 and the election of Ahmad Shukeiri, who was from a prominent Palestinian family and was among Nasser’s close associates, as its leader was a result of Nasser’s desire, and also the desire of other Arab League states, to monopolize the Palestine issue and contain the resistance.

The idea that the Palestinian cause can be pursued only by the Palestinians themselves began to gain currency from the 1970s on, when Nasserism started to decline.

Although its foundations were rooted in pragmatic political interests, the ideal of the Arab League also had a serious intellectual background. For the ideologues who pondered over the political prospects of Arab peoples in the post-Ottoman period, the idea of a pan-Arab confederation with Syria at the center appeared as the first alternative. Devised by Sati al-Husri as a practical form of the ideal of “language-centered” Arab nationalism, this project was later revamped in Syria by Michel Aflaq and Salah al-Bitar as the doctrine of the Baath Party.

The ideal of a socialist and nationalist Baath, which ascended swiftly in Syria, Iraq and even in Jordan, would be realized by Nasser, who came from the same ideological background.

Indeed, Syria, Egypt and Yemen formed a federation in 1958 but domestic political rivalries crippled this project. The Arab League’s stated function was to pave the ground for a federation. But its stance on various crises arising in the Middle East soon revealed both the dissent among Arab states and the organization’s dysfunctional structure.

First, the Baghdad Pact, which was formed by Turkey, Iraq, Iran and Pakistan in 1955 at the urging of Britain, shook the Arab League to its core. Despite Nasser’s efforts to prevent it in any way, Iraq joined the pact that was under the security umbrella of the West.

Similarly, during the Suez crisis in 1956, which began with the joint British, French and Israeli attack on the Suez Canal, apart from symbolic condemnation messages, the Arab League failed to display substantial unity.

And, during the Six-Day War in 1967, the union failed to even implement an “oil embargo,” which was considered the most effective move it could make, due to the lack of central coordination. In the wake of the league's failure to act, Israel eventually occupied Gaza and the Golan Heights.

The 1970s saw the commencement of détente in the Cold War, Nasser’s fall from power, the Palestinian cause coming under the control of armed groups emerging from within Palestine and, most importantly, the rise of groups like the Muslim Brotherhood throughout the Middle East. In this new phase, the Arab League underwent a serious crisis, especially after the Yom Kippur War in 1973.

Egyptian President Anwar Sadat, who succeeded Nasser, reaching an agreement with Israeli leader Menahem Begin at Camp David dealt a severe blow to the legitimacy of Egypt within the Arab League, since Egypt had been the leading actor in the union from the beginning. As the league moved its headquarters from Cairo to Tunis, Egypt was excluded from the organization.

This reaction was perhaps the first and only action by the Arab League since its inception that drew attention and produced concrete outcomes. After all, the cause of Palestine was critical for the Arab League, and for the leaders of countries like Syria, Saudi Arabia and Jordan, and the signal that this cause was still important mattered with respect to their legitimacy.

The void in the league left by Egypt was to be filled by Saddam Hussein’s Iraq. During the Iran-Iraq War first, Iraq’s invasion of Kuwait and the U.S. intervention in Iraq, the Arab League maintained its classical stance and chose inaction when an Arab state violated the sovereignty of another Arab state.

The Arab League’s history of nearly 60 years shows some patterns. Before anything else, the problem of authorization stemming from its structure makes it almost impossible for the organization to make decisions about issues like security and sanctions, and especially about mediation and conciliation initiatives toward solving regional issues.

Adding member states’ divergent foreign policies and social differences to this picture, the Arab League cannot develop beyond a non-functional organization. That the organization could not take concrete steps with respect to issues like the Lebanese Civil War, the Gulf War and the U.S. intervention in Iraq reveals this reality.

The Arab League’s current agenda consists only of lending ineffective support to the policies of Arab states that stand out within the current realpolitik and of issuing symbolic condemnations.

Therefore, as can be observed from the Arab Spring and ensuing developments, the organization has neither social legitimacy nor influence in the eyes of Arab peoples. The league represents nothing more than a forum for authoritarian leaders to voice populist and pragmatic discourses that are meant to maintain their grip on power.

Within the current political atmosphere in the Middle East, which in particular sees Saudi Arabia and other Gulf states edging closer to Israel, the Arab League seems to have fully given up its pro-Palestine stance, which was its founding purpose.

So, relying solely on symbolic "condemnations" issued during crises, the Arab League has no influence whatsoever in regional or international politics. As of today, organizations such as the Gulf Cooperation Council (GCC), which bolsters the Saudi sphere of influence, and the Organization of the Petroleum Exporting Countries (OPEC) have already gotten ahead of the Arab League.