Lebanon's options: Is there hope for a secular democracy? 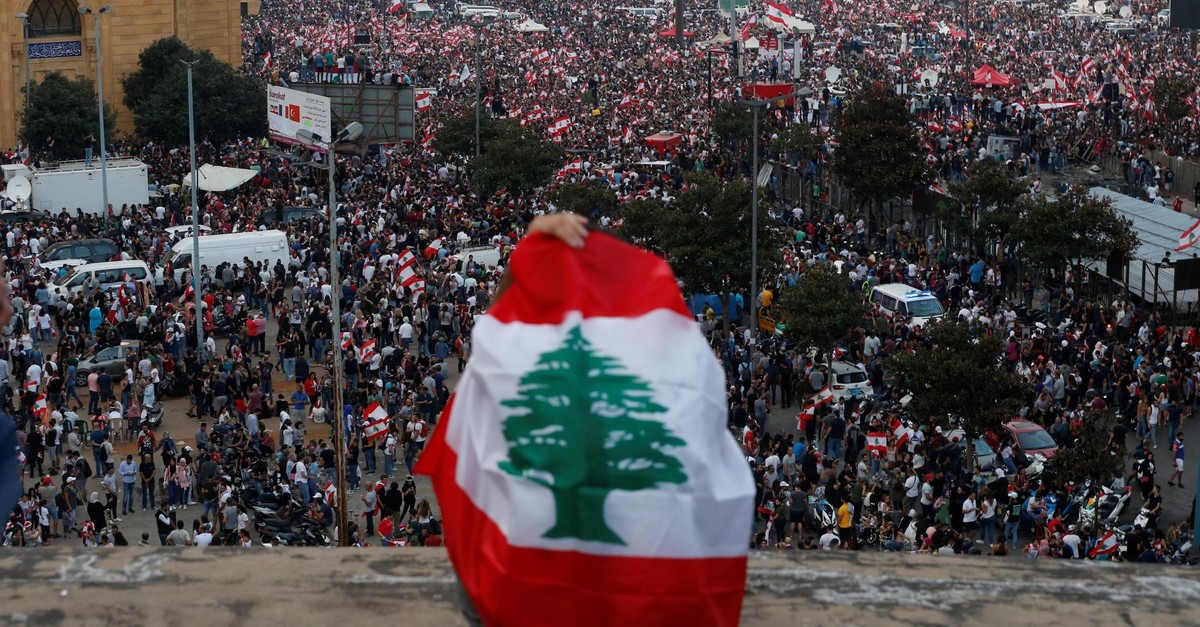 Lebanese people are today on en route to becoming more 'Lebanese' than ever; they are now voicing their demands based on a wider nation-based idea and possibly seeking a new social contract

More than a month has passed since the wave of protests in Lebanon broke out. The resignation of Prime Minister Saad Hariri and promises of reforms by President Michel Aoun through improvements in several areas did not satisfy the protesters.
While Lebanon drifts into a new period of uncertainty, issues like whether the protests will lead to changes within the political system, and the future of a system based on sectarian or confessional power-sharing, are gaining importance.

The foundations of the political system in modern Lebanon date back to the mutasarrıfate (governorate) system implemented by the Ottomans in the region towards the end of the 19th century. That system, which envisages the joint participation of the region's sectarian-based groups in the administration, is known today as “confessionalism” or “consociational democracy.”

The 1926 Constitution prepared under the French mandate rule and the National Pact reached in 1943 when the country gained independence, essentially a gentlemen’s agreement that reflected a consensus between Sunni and Maronite elites, represented the institutionalization of the system in Lebanon.

After the civil war

The 1989 Taif Agreement, which ended the Lebanese civil war, accepted the consociational model while introducing several reforms that would increase Syria’s influence in Lebanon. Eventually, however, since it allowed for the mobilization of confessional groups within the pragmatic politics of powerful families, this system was usually seen as the primary cause of turmoil in the country. The weakest point of Lebanese politics, which had been destabilized by the interventions of Syria and Israel, was the abuse of sub-identities by the elites for manipulative purposes and the resulting neglect of the common Lebanese identity.

In fact, the main source of motivation that added dynamism to the recent protests has been the disillusion of people with confessional politics. In the absence of economic troubles or the "WhatsApp" tax, that backlash might not have been so strong and persistent. But what Lebanese protesters on the streets really want is more powerful actors in national politics, who are not mired in nepotism and corruption, or the new political figures that emerged after the civil war, to not place their own interests above those of the nation, as part of the confessional politics. Warm relations between the protesters and the Lebanese army during the protests indicate this national consensus as well. People’s sympathy for their own national army instead of confessional paramilitary groups reveals what Lebanon wants.

Though the Lebanese historiography tends to extol the ethno-sectarian diversity and tolerance for minorities as the basis of national identity, the “cosmopolitan heritage inherited from Phoenicians” is a major cause of the dysfunctionality in Lebanese politics today. Especially every community’s acting in line with their own rules with regard to issues like education and civil law creates a lot of problems that affect social life in practical terms.

Failure to standardize the school curricula prevents the creation of a common historical discourse that fashions a common past for all Lebanese, a prerequisite for every "imagined community." On the other hand, inter-confessional marriage is still viewed as an "anomaly" and creates huge problems for those who take this risk. An article titled “A nation divided: Lebanese confessionalism," published in 2006 by Maurus Reinkowski and Sofia Saadeh, explores what options Lebanon has as an alternative to the consociational system.

According to the article, dismissing the conservative attitudes of the elites who make the most of the operation of the existing system in terms of economic and political capital, keeping the consociational system with some revisions but dissolving it within a wider and enhanced Lebanese identity, or abolishing the system and establishing in its place a modern secular democracy, seem to be the most reasonable options.

Although both solutions are virtually impossible to implement at once for Lebanese politics, which is intertwined with overly complex alliance ties, they must be absolutely considered since the consociational model is seriously questioned nowadays. Overhaul of the system may appear as a solution that can be achieved through forming a government of technocrats, an oft-expressed idea.

But political balances in Lebanon and a configuration based on the equality of the president and the prime minister, which emerged during the post-Taif process, reduce the efficiency of that option. It would be quite difficult for any government not built upon a consensus between Hariri’s party (al-Mustaqbal, or Future Movement) and Hezbollah to produce active policies in such a critical period. The sudden removal of the confessional power-sharing system seems equally difficult. Still, the protesters who did not leave the streets for weeks on end have the potential to change the patterns of Lebanese politics.

It’s too early to talk about any concrete gains from the protests. Further, it’s also hard to say that the protests smoothed the way for a certain political movement, including the policies of such political actors as Saad Hariri and Samir Geagea who try to appropriate the protests for their own interests. The most relevant remark suggests that the protests led to the strengthening of a common Lebanese identity over all confessional identities, and perhaps paved the way for a new social contract.

The similarities in the wave

As seen in post-Arab Spring Egypt, however, this democratic ground may allow a figure, with ties to external powers to grab the political power, or, as occurred in Lebanon in 1943, a pragmatic system may derive legitimacy from the people’s demands for independence and freedom as well.

Views of Lebanon’s political actors on the protests manifest the difficulty of coming up with a common solution for the future. When the protests intensified, al-Mustaqbal leader Hariri resigned from the government which had been formed with great difficulty after lengthy negotiations and aligned himself with protesters.

Although he has made numerous remarks intended to please protesters and tried to cast himself as a nonpartisan figure, the Hariris, who have close ties with the Saudis, were among those criticized most in the post-Taif order. Similarly, Samir Geagea, a notorious warlord during the civil war and the leader of the Lebanese Forces Party, went so far as to present himself as the “leader of liberated zones.” While Geagea has long been rumored to be trying to become the Saudis’ new “actor” in Lebanon, his bloody past and war crimes make it impossible for the Lebanese to support him.

President Aoun and Hezbollah, who showed the harshest reaction against the protests, insist on linking the incidents with “foreign powers.” Aoun described Prime Minister Hariri’s resignation as the “fall of a consent government.” Hezbollah leader Hassan Nasrallah, on the other hand, warned that the protests could plunge the country into civil war and gave the message that “if Hezbollah takes to the streets, a lot will change.”

At present, the existing system brings the greatest advantage to Hezbollah, which has managed to turn its image of “the defender of Lebanon” into political capital. As the representative of Lebanon’s Shiite community, which is probably (no census has been conducted in Lebanon since 1932) the biggest single section of the population, Hezbollah wants a “dysfunctional political arena” in which it can deploy its current capabilities with its own infrastructure and with its organizational structure that operates like a state within a state.

Nabih Berri, speaker of the parliament and leader of the Amal movement, held a mediating role and has long tried to prevent Hariri’s resignation. Known as a representative of Lebanon’s secular Shiites, Berri was among those political actors who has dwelled most upon on the sectarian divide.

Today’s Lebanon, in which the dichotomy between (the Western-backed) March 14 coalition and (the pro-Syrian and Iranian) March 8 block, or the Muslim-Christian and Shiite-Sunni divides are not much relevant anymore, is discussing the abolition of the consociational system with the help of the dynamism of street protests, perhaps for the first time so seriously.

For the Lebanese, issues like “corruption, nepotism, dysfunctional politics and interventions of foreign powers," which are evoked by the current system, imply that the centuries-old confessional model has become obsolete. The Lebanese demand equality before law and equal rights, regardless of religion or sect. Slogans like “The era of sects has ended” and “A revolution against fear” prove this. People’s desire for a “new generation” of politicians who can genuinely represent them stems from their hatred for political actors with “external backing.”

The Lebanese protests are remarkable in that they offer a vision of secular identity in the Middle East. Moreover, although it tends to be usually overlooked, there are many national figures, memories or “things of the past” that can enable the Lebanese to unite around a common culture today.

While those who view Lebanon as a “project” built by the French on flimsy foundations are likely to omit, it’s quite possible that elements of the historical legacy that refer to the Lebanese identity as a whole can become popular nowadays.

Every civil war ended, every disaster left behind, every moment spent standing shoulder to shoulder on streets, and every social and economic problem faced strengthen a common culture on a community’s journey to becoming a nation. Today, Lebanese people are much more “Lebanese” than ever. And doubtless this is a prerequisite for a secular democracy that becomes possible when national identity takes precedence over any kind of sub-identity.