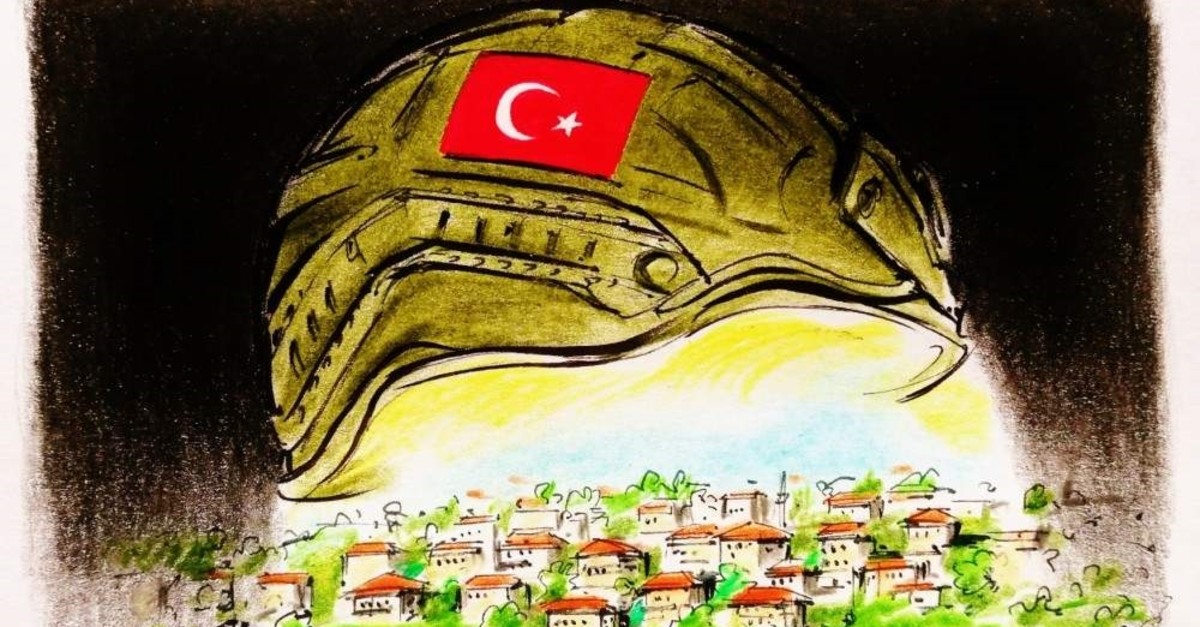 The plan to establish a safe zone in northern Syria promises hopeful displaced locals the chance to return to secure, peaceful homelands after suffering years in exile

Turkey proposed the establishment of a safe zone in northern Syria long before it started its anti-terror Operation Peace Spring to ensure the safety of its civilians and prevent the creation of a terror corridor along its border with Syria.

A safe zone not only promises a secure place for Syrian refugees in Turkey to return to but also ensures reinforcement of Syria's territorial integrity.

Unfortunately, despite Turkey's best efforts, the safe zone was not implemented due to unkept promises and Ankara's frustration over U.S. support for the People’s Protection Units (YPG), the Syrian offshoot of the terrorist PKK.

Though the U.S. and Turkey held intermittent talks, they made no substantial progress until August 2019, when both countries set up joint operations centers to discuss the establishment of a safe zone.

Not long after the last phase of talks between Turkey and the U.S. in October 2019, U.S. President Donald Trump withdrew American forces from northeastern Syria, paving the way for the long-anticipated Turkish anti-terror Operation Peace Spring.

Commencement of the operation proved to be a significant step in breathing life into the safe zone idea as the operation aimed to remove terrorists from a 440-kilometer-long and 32-kilometer-deep area.

Operation Peace Spring began on Oct. 9 at 4 p.m. and continued until Oct. 17, after which it was temporarily halted for 120 hours as part of an agreement between Turkey and the U.S. to allow time for YPG terrorists to withdraw from the designated safe zone area.

Soon after the pause limit expired, Turkey agreed with Russia to halt the operation for another 150 hours so Russian forces could ensure the removal of the YPG from the safe zone area.

Way more than the U.S., Turkey needed the formation of a safe zone in northern Syria because of its proximity to terrorist organizations and the conflict in Syria. Just ask yourselves: What would you expect from your country if a terror corridor was being set up on its border?

I am sure you would expect your country to counter its creation by doing whatever necessary. Turkey has been suffering from PKK terrorism for nearly three decades. The PKK and its Syrian offshoot YPG have claimed the lives of almost 30,000 people. When the civil war broke out in Syria, the PKK/YPG started to relocate themselves to Turkey's border to terrorize and change the demographics of the region.

They capitalized on cities such as Tal Abyad and Ras al-Ayn to launch attacks into Turkey, resulting in mass civilian casualties, including women and children. This had become, and is, a matter of grave concern for Turkey's national security.

Vexed by the developing situation on the ground, Turkey voiced its concerns to world powers regarding the presence of the YPG and proposed the formation of a safe zone. The safe zone helps not only in the removal of terrorists but also serves as a place to relocate about 2 million refugees out of the nearly 4 million Turkey is hosting.

Upon the successful implementation of the safe zone, Turkey plans to be at the forefront, along with other countries, in building infrastructure to meet the basic demands of the refugees, just like it did in Afrin after conducting Operation Olive Branch. Here are some details of the proposed safe zone infrastructure:

The entire residential area in the safe zone will have 11 mosques, nine schools, five youth centers and two indoor sports halls. The construction is expected to cost about $26.6 billion.

Now, with the ever-increasing need for peace and security in the region, the safe zone has provided a glimpse of hope for millions of Syrians willing to go back to their motherland.

What was northern Syria like before Turkey conducted anti-terror operations?

The YPG’s presence in northern Syria was a threat to Syria’s territorial integrity. The lives of innocent civilians were at risk; Kurds were being oppressed; Arabs were being killed. As a matter of fact, the YPG committed war crimes in northern Syria by trying to alter the demographics of the country.

To get to the bottom of this, I sat down with Orhan Sali, the managing director of Turkish broadcaster, ANews. He has extensively covered Turkey’s anti-terror operation in northern Syria, starting from Operation Euphrates Shield.

I asked him what he witnessed firsthand after Turkey liberated cities from terrorists and what details he could get from the locals of northern Syria about the YPG’s oppression. This is how he explained it:

“The counterterrorism operations in northern Syria were conducted to protect Turkish and Syrian civilians. You asked me what I saw while covering these operations. Well, let me tell you, what I witnessed is too tragic to describe,” said Sali. “So many civilians died due to the YPG’s terror, especially because of mortar shells and mines. There was constant incoming artillery into Turkey. I saw 100-kilometer-long tunnels dug to serve as a way to escape for these terrorists. The YPG had also set up training camps in cities such as Ras al-Ayn and Ayn al-Arab. They had been sending people to Turkey through the tunnels to terrorize the region,” he added.

“The first thing that caught my attention after the successful completion of these operations was how life resumed its normal state for the native people in the region. I also noticed how there was no mass destruction like we witnessed in Raqqa after the U.S. military’s operation. People were happy to see Turkish forces in the region because they know Turkey is a state; whereas, on the contrary, the YPG was a terrorist organization oppressing the region and its people. After speaking to people in liberated areas, I can tell you people were sick and tired of the YPG’s presence in Syria. Besides, it is also important to note that Turkey did not abandon the area after clearing it of terrorists,” Sali explained.

According to Sali, the basic needs of the people were met through reestablished infrastructure, including building new hospitals and schools. These are the reasons people in Syria celebrated after the liberation of their cities. Locals in the liberated areas are very happy now.

It is clear from Orhan Sali’s description of the events that Turkey’s anti-terror operations have not only helped in countering the YPG’s oppression but have also bolstered the reconstruction of liberated cities. This is exactly what Turkey intends to do with the safe zone.

If the agreements between Turkey and Russia are successfully implemented without skirmishes, the safe zone is not far from being realized. To end this, I want to emphasize a point: Is the safe zone a permanent solution for northern Syria? Definitely not! However, it is a temporary solution that would pave the way for a permanent one.

*Anchor at A News TV channel, based in Istanbul