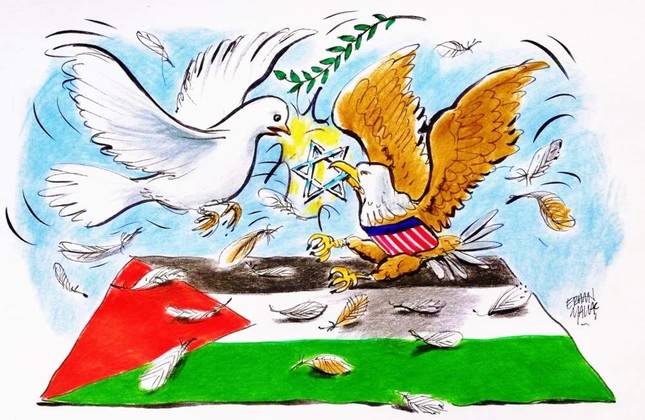 As long as the U.S. administration fuels the fire with controversial decisions and Israeli violence deepens, peace for Palestinians will never come

In a speech to the American Israel Public Affairs Committee (AIPAC) in March 2016, Republican presidential candidate Donald Trump vowed that America would “move the American Embassy to the eternal capital of the Jewish people, Jerusalem.” True to his word, a little over a year after his election on Dec. 6, 2017, President Trump formally recognized Jerusalem as the capital of Israel, reversing nearly seven decades of American foreign policy and moving the United States Embassy from Tel Aviv to the holy city of Jerusalem.

“Today we finally acknowledge the obvious: that Jerusalem is Israel’s capital,” he said. “This is nothing more or less than a recognition of reality. It is also the right thing to do. It’s something that has to be done.” After two years of Trump’s recognition, we find that this decision not only broke the international consensus on Jerusalem but also contributed to prejudging an issue that was supposed to be addressed in the final negotiations between the two sides. The change in the status quo, after Trump’s decision, had deep symbolic interpretation and boosted Israeli sovereignty at the expense of Palestinian rights in the city, fueling more tensions and blocking any hope for any future peace plan.

The importance of the city

The city of Jerusalem has a special meaning for Muslims, Christians and Jews. In general, the issue of Jerusalem represents one of the most sensitive and complex red lines of the conflict between Israelis and Palestinians. For Palestinians, east Jerusalem, or al-Quds, is to be the capital of the future Palestinian state. For Israelis, they believe that the entirety of Jerusalem, or Yerushaláyim, is the indivisible capital of the Jewish state. Given the intractable nature of the dispute and its social, economic and religious implications, multiple attempts at negotiations have stalled over the question of Jerusalem, and there was little sign of change on the horizon. The Israeli policy of severing political, economic and social links between the West Bank and east Jerusalem has caused a serious deterioration in Palestinian living conditions and President Trump’s decision deteriorated the situation dramatically.

Jerusalem has experienced more than its share of sieges, attacks, conquests and catastrophes, with the last 72 years adding new layers of turbulence to its extensive record. Between 1948 and 1967, Jerusalem was a divided city under two states: the Israel-controlled western part and the eastern part, which included the holy city, subject to Jordanian rule.

The 1967 Six-Day War dramatically changed the situation. Israel occupied the eastern part of the city as well as the majority of its suburban neighborhoods. This occupation contravenes international law, confirmed by a series of United Nations General Assembly and Security Council resolutions, which defines the eastern part of the city as an inalienable part of the occupied Palestinian territory. Therefore, the 4th 1949 Geneva Convention on the protection of civilians in occupied territories is fully applicable to the inhabitants of east Jerusalem.

Most of the international community considers Israel's annexation of east Jerusalem and its status modification illegal.

In 1980, Israel unilaterally declared the entire city of Jerusalem the "unique and indivisible capital of the state." This nomination has been contested by the Palestinians as well as by the international community.

The position of the international community on Jerusalem is based on U.N. Security Council (UNSC) and General Assembly (UNGA) resolutions 181, 242, 252, 298, 476, 478 and 2334. Cumulatively, these resolutions call on Israel not to alter the legal status of the city. Israel has categorically refused to observe any of these resolutions, claiming in particular that Resolution 181 lacks a legal basis.

In fact, this 1947 resolution is the foundation of the international legal stance on Jerusalem, stating that the city is a corpus separatum, the status of which must be settled by negotiations. Of the remaining resolutions, it is UNSC Resolution 242 that matters most for the remainder of Palestinian territory. The resolution urges Israel to withdraw from occupied territories and confirms east Jerusalem as the capital of the future state of Palestine. This resolution forms the legal base for the Oslo Accords and for subsequent peace talks, although Israel interprets the text and argues that the resolution does not call for the withdrawal of Israeli troops from all occupied territories and notably not from Jerusalem.

Israel's drive to settle Jerusalem and its environs has completely changed the boundaries of the city, altering demographic trends and the historic skyline in order to achieve the ambitious objective of a "Greater Jerusalem," the capital of the state of Israel, unified and indivisible from the west to the east with a strong Jewish majority. The settlement project in east Jerusalem was entailed by the acquiring, including confiscation, of the greatest possible area of land in east Jerusalem and settling Jewish populations in the surrounding areas of the city.

In the second phase of settlement, which started in the 1980s, Jewish settlements were established and expanded within the territory of occupied Jerusalem. This contributed to increased political, social and economic tensions between Arabs and Jews.

The third and still ongoing phase started with the construction of the separation wall and the imposition of its "curious" path through the Jerusalem governorate, dividing the city from its suburbs, enclosing a number of Palestinian villages. The wall and settlements have jointly strangled the livelihoods of many Palestinians living in east Jerusalem.

Jewish settlement construction in annexed east Jerusalem has spiked since Trump took office in 2017. The expansion of the settlements in east Jerusalem threatens and complicates one of the thorniest issues in the conflict.

The refusal to grant permits to Palestinian residents has confined them to crowded, poorly served neighborhoods, with around half the population believed to be at risk of having their homes demolished. While Palestinians make up more than 60% of the population in east Jerusalem, they have received only 30% of the building permits issued since 1991.

Nongovernmental organization Peace Now found that in the first two years of Trump’s presidency, authorities approved 1,861 housing units in east Jerusalem settlements, a 60% increase from the 1,162 approved in the previous two years. The figures show that 1,081 permits for settler housing were issued in 2017 alone, the highest annual number since 2000, while 1,233 housing units were approved for Palestinians in 2017 and 2018, according to Peace Now.

Settler attacks in east Jerusalem have increased rapidly since Trump’s recognition of Jerusalem as Israel’s capital; these attacks vary between physical assaults, sometimes leading to death and destruction of property. These attacks were carried out either individually or within groups in the framework of Zionist movements and formations who have become responsible for such attacks or support and protect them.

Such attacks have coincided with increased financial support for these settlers from Israeli institutions, including the government. Settlement activity in itself is deemed a constant assault against civilians and their property besides the continued systematic provocative raids on Al-Aqsa Mosque and Palestinian worshippers.

Israel has the upper hand with power and military might in addition to extensive funding. Besides, Israel, with the full backing of President Trump, is unconcerned with what the rest of the world thinks about its apartheid policies against Palestinians.

Although Trump has argued that his recognition does not preclude a final settlement, it is clear that his unbridled support for Israel’s nationalist government has given it a free pass to tighten its grip on war-won lands sought by Palestinians, denying their national identity, aspirations and any future Palestinian state.

Share on Facebook Share on Twitter
Previous in Op-Ed One of the strangest and most brutal terrorist groups in contemporary... Next in Op-Ed Chief Petty Officer Edward Gallagher is the U.S. Navy SEAL at the...
DAILY SABAH RECOMMENDS