Who is the enemy? Redefining and readapting NATO 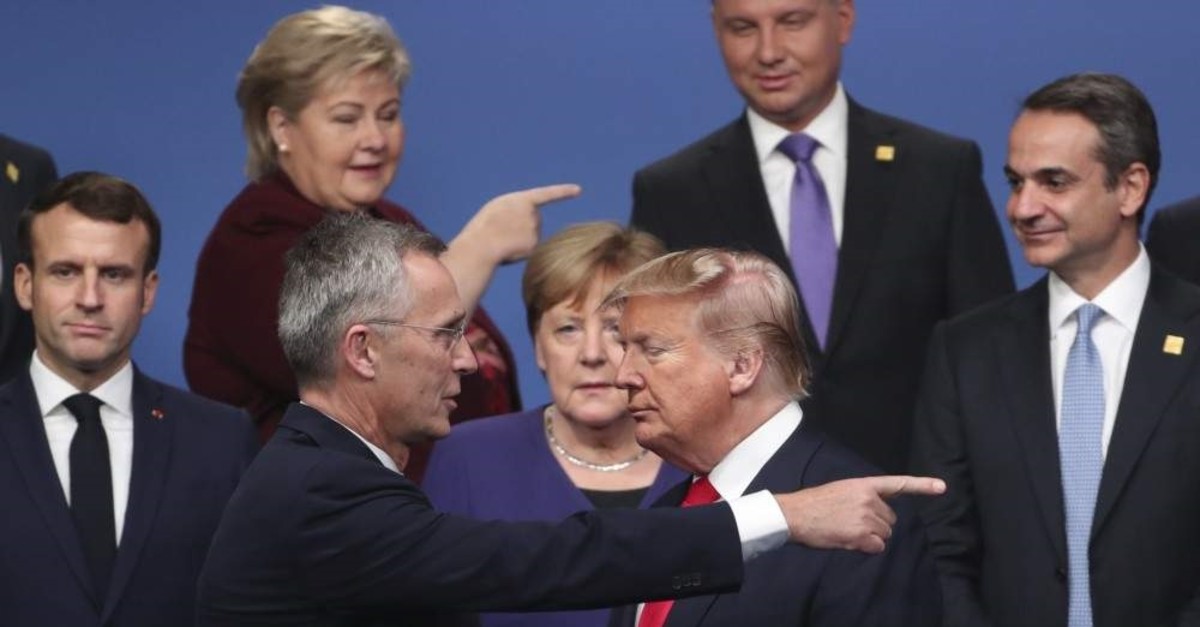 Last week, the much-anticipated NATO summit took place in London. Under the influence of an intense media spotlight, ominous predictions of a NATO in crisis and a summit in dispute were fittingly assuaged by a series of reassuring comments by various leaders as well as the "London Declaration" published after the forum.

Still, the prior eyebrow-raising comments of "NATO's brain death" by French President Emmanuel Macron, U.S. President Donald Trump's tough approach to NATO-spending and Turkey's latest incursion against the PKK terrorist organization's offshoot in Syria are all ample food for thought against which the raison d'être of NATO has been scrutinized.

Having described Russia as a "deeply European country," for example, Macron had stated that NATO should focus on the threat from terrorism rather than Russia. But whether NATO focuses on one or the other is a fallacy, for the problem is simply not an either-or issue. What is, in fact, important is how a possible European rapprochement with Russia may be received in Washington, and whether or not the threat from terrorism is blinded by domestic political issues, regional catastrophes such as the Syrian civil war where not all NATO-members empathize with the unique concerns of others, and other unsettled bilateral political situations between member states.

The case of a possible rapprochement with Russia has reemerged in an era tinged with Trump's "America-first" dictum alongside signals of a more isolationist slumber in its foreign policy. In tandem, there has been growing agitation in Europe to take the security of the continent into its own hands. But if not Russia, who exactly is now the enemy or threat that Europe must reorientate itself against? Where does the fear and apprehension with regards to the broad-brush stroke of European security emanate from? Such profound questions are in a sense welcome if indeed NATO is to continue to be a relevant and effective institution, which is all the more imperative in a contemporary international community described by U.N. Secretary-General Antonio Guterres as an era of greater "anxiety, uncertainty and unpredictability across the world."

In response, over the past few years, there have been various indications by European members of NATO that have suggested the continent is searching for an alternative multilateral security arrangement. The discontent between some members on the issue is well-known. Some members seem to believe that without U.S. support, the continent has a limited chance against the military might of Russia. Others advocate that the union has capabilities and resources if united and coordinated appropriately against any potential enemy. With the latter group in favor of alternative security mechanisms built upon the bedrock of NATO, there are a number of current projects of member states for realizing the dream of an EU army.

In this light, the EU's Global Security Strategy announced in 2016 paved the way for a number of joint defense projects exclusively for EU member states. The Military Planning and Conduct Capability (MPCC), or the Permanent Structured Cooperation (PESCO), is one of the most prominent ones that provides a binding framework to enhance joint defense investment, cooperation and operational readiness among the 25 participating member states. In 2018, the European External Action Service proposed a new off-budget fund worth 10.5 billion euros to fund the common costs of the Common Security and Defence Policy related to the operations conducted overseas. These new initiatives, however, present non-EU members of the NATO with a reason to scrutinize the contribution and support that EU members provide for the security of the transatlantic community.

Above all, Macron, as one of the strongest advocates of the European army, is adamant the "enemy" or the "other" must be redefined, that the spotlight should shine less on Moscow and the perennial threat of terrorism and that the constant "other" that should become the new justification for NATO or perhaps a new European-only security mechanism. This is why he called for closer ties to Moscow and stated: "If we want to build peace in Europe and rebuild European strategic autonomy, we must reconsider our position toward Russia."

Europe, he says, is now on the "edge of a precipice," and NATO is undergoing brain death, with a veiled threat to Turkey's latest incursion against the People's Protection Units (YPG) in Syria, the YPG being, of course, the Syrian extension of the PKK terrorist organization.

On the other hand, the text of the London Declaration wisely referred to "terrorism in all its forms and manifestations" which rightly counteracts possible subjective justifications that may attempt to legitimize terrorism. This is exactly the type of solidarity NATO must be based upon.

Ankara has been infuriated by the U.S. material support for the YPG as its proxy group on the ground, and Macron has been no less hostile to Turkey's concerns by hosting the YPG at the Elysee. In fact, the points of tension between the EU and Turkey have unfortunately simmered for some time, but such brazen support for the YPG touched a very sensitive nerve in Ankara.

From the Turkish perspective, Europeans such as Macron are willing to signal security and the fight against terrorism yet at the same time utterly disregard Turkey's own national security and fight against terrorism. The nature of the association between the PKK and the YPG is there to see if there is a willingness to do so, a relationship that must be reversed with the example of the Kurdistan Regional Government (KRG) in Iraq, which enjoys good relations with Turkey while simultaneously admonishing the PKK.

Perhaps earlier U.S.-led short-sightedness in Syria in the form of emboldening the YPG – which is not there simply to fight Daesh, and earlier reluctance to overthrow the brutal Bashar Assad family regime, and not a blinding obsession with Turkey's president may help those from the European continent understand the nature of the threat in the region, and thereon act accordingly.

Unfortunately, although somewhat understandable, it seems certain European states are far more concerned with barring refugees from the catastrophe that has been the Syrian civil war then they are in addressing either the concerns of Turkey or the root of the conflict in Syria. As the former German ambassador to NATO, Joachim Bitterlich said in an interview with FRANCE 24 on Tuesday, "Where is our discussion with Turkey? To some extent we left Turkey alone."

NATO, of course, does not exist in a vacuum in the sense that both domestic politics and bilateral tensions between member states can sour to the extent that the debate without swift resolution then percolates into the forum of NATO to the sound of champagne corks popping in Moscow.

Turkey's NATO membership is called into question when an unwillingness to understand Turkey's concerns is combined with an arrogance that does not seek to engage, talk or cooperate. It is not France that shares a 911 kilometer border with Syria, as well as Iran and Iraq, a frozen conflict between Armenia and Azerbaijan, a Georgia that has suffered its own Russian invasion, the Ukraine-Russia crisis and the creeping antagonism in the Eastern Mediterranean caused by the lack of resolution for the Cyprus problem.

To downplay and/or to outright ignore legitimate security concerns of some member states cannot be the spirit of an effective alliance, for members such as Turkey will then be forced to take unilateral moves that other NATO members have then felt uncomfortable with. If the core message of the recent summit in London is to have a more engaging partnership by highlighting NATO's enduring core values, then every effort must be made to find equitable and win-win resolutions to friction between member states so that the alliance itself may be strengthened from the ground up. An era of greater animosity calls for an even greater diplomatic effort, nuance and comprehension of the exact nature of the challenges faced today. The greatest enemy may indeed be ignorance instead.

* Öztaş is a Ph.D in International Political Economy from King's College London. He specializes in global security, geopolitical risks and the politics of transnational economic affairs.

** Birgel is a graduate of the School of Geography and the Environment, Oxford. His DPhil. focussed on natural resource conflicts, with particular emphasis on the relationship between the peace and natural gas development processes in Cyprus.