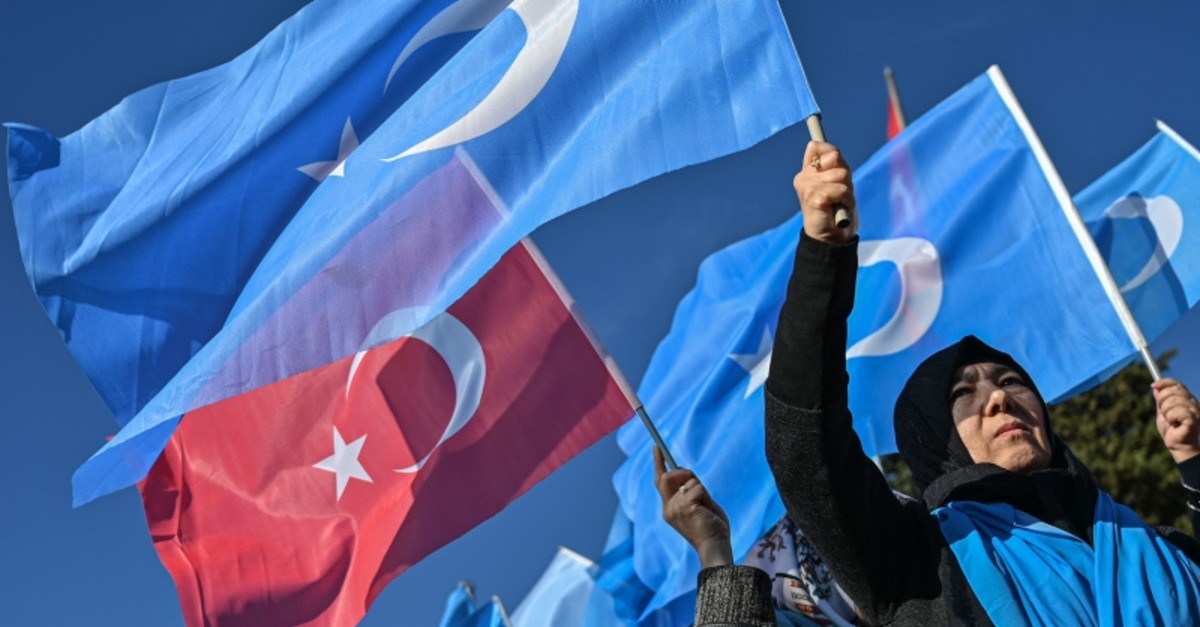 Supporters of China's Muslim Uighur minority wave flags of East Turkestan and Turkey during a demonstration at Beyazu0131t square in Istanbul on December 14, 2019. (AFP Photo)
by Olsi Jazexhi Dec 17, 2019 2:10 am

I was very happy to read your article "What is happening in Xinjiang?" that you published in Daily Sabah on Dec. 9, 2019. The Chinese saying that you mentioned: "To listen to both sides, one will be enlightened, but if heeding only one side, one will be benighted” was very enlightening. We, the people of the Muslim world, need to open up a serious dialogue with China regarding its Muslim citizens – our brothers in Islam.

While I fully understand that China has been suffering from threats of terrorism and separatism in the last decades, the challenges that China has faced should not be translated into a war against the belief of millions of its citizens. While the government of China and the Xinjiang Uighur Autonomous Region (XUAR) has a right to fight terrorism and separatism, this fight should not target innocent Muslim believers and mosque-goers, taking away the rights of its Muslim citizens to believe and practice their religion.

The visit in the region

During our visit to XUAR, it was clear that the people who were interviewed by myself and other journalists were not extremists, yet had been detained and sent to concentration camps called "residential schools" for religious "crimes." These "crimes" for us are basic human rights that every human must enjoy.

The inmates that we interviewed told us that their crimes were reading the Quran with friends, praying to God in public, calling their parents to pray to God, writing that a true Muslim should pray five times per day and that Uighur CCP members are not real Muslims, wearing a headscarf, marrying according to religious requirements, eating and living a Halal life, reading the history of Islam and Uighurs, etc. During our visit to Kashgar "residential schools" in Wensu County, we discovered that the detainees who were described as "extremists" were innocent Muslims whose only crime was being Turkic and Muslim.

During our visit, the Chinese officials who were in charge of the state administration offices in Xinjiang showed us the economic progress of the region and the plans that the government has to turn Xinjiang into a major economic hub for China’s One Road, One Belt project. While the economic progress is to be commended, we observed a very heavy police and military presence everywhere. Xinjiang resembled the occupied Palestinian territories, where the Israeli army and police rule over the Palestinians.

In Xinjiang, the Han Chinese minority was in total control, policing and "re-educating" the Uighurs as the Japanese did in China during World War II. The Uighurs that we managed to approach, while our Chinese guides could not see us, were afraid to speak as our Chinese friends made sure to scare them into not talking to us. We saw this fear even in the Xinjiang Islamic Institute, where the government is ‘educating’ a new generation of imams who speak Chinese and obey to CCP orders.

In your article, you write that Xinjiang has "24,400 mosques, 29,000 clergy and 10 religious institutions." I am afraid that this information is not true. Xinjiang authorities have closed and destroyed many mosques, locked many others, imprisoned hundreds of imams and the Uighurs were afraid to attend their prayers.

The mosques that we visited did not convince us to be real mosques. In the Urumqi Bazar, the Xinjiang authorities had desecrated the holy Chong Baza Jami and turned it into a shopping mall. This beautiful and iconic mosque was filled with Chinese flags and no Muslims were allowed to praise Allah there. In Kashgar, the Id Kah Mosque was turned into a museum operating only for Friday prayers.

The azan (the call to prayer) was even prohibited. When we, the Muslim journalists from Qatar, Turkey, Afghanistan and Pakistan visited the mosque – on my insistence for the Jummah prayers – we found that there were only a few old men praying who were afraid to even speak to us. The mosque had over 12 cameras in its entrance and every elderly believer who was praying was being monitored as being a criminal. Our Uighur guides did not dare to enter the mosque, because they were afraid of losing their jobs if they would be seen inside the mosque. They told us that as state employees believing in God was prohibited.

The Chinese scholars Xu Guixiang, Ma Pinyan and Li Wei told us that the strategy of China’s government was to Sinicize Islam and remove any sign of Turkic and Arabic influence from the mosques as well as from China’s Muslims. In all the mosques that we saw and visited, we observed huge Chinese flags and CCP propaganda posters which were desecrating the Holy places of Islam where believers should not participate in politics, but praise Allah the Almighty. The desecration of Islam resembled the desecration that the Seleucids made against the religion of the Jews in the time of the Maccabees. This desecration which is enforced by "Xinjiang Uighur Autonomous Region Regulation on De-extremification" (Chapter 1, Art. 4) and the prohibition of the practice of Islam by the Muslims of Xinjiang in any aspect of life (Chapter 2, Art. 9) and the indirect declaration of Islam as an extremist religion, discredits the propaganda of the government which claims that it is fighting the "three evils"– terrorism, separatism and extremism – saying that it has no problem with religion. It aggravates resentment toward China by Muslims and instead of resolving the problem, it makes it worse.

While I do respect China as a great world superpower and Xinjiang as part of its territory, I would like to express my humble advice to your very powerful government. When I was in Xinjiang, I told our Chinese friends that while China has every legal and national right to fight terrorism and separatism, it should not humiliate its Muslims as it is doing by considering them enemies and placing them in concentration camps in order to de-Islamize them. China must learn from Russia who had similar separatist problems in the 1990s but has successfully managed to reintegrate Muslims and Islam as part of its inter-religious and inter-ethnic mosaic. As the honorable ambassador mentions, "the people of all ethnic groups in Xinjiang are important members of the big family of the Chinese nation." I strongly believe that XUAR authorities should follow your statement and treat all the ethnic and religious groups of Xinjiang equally. They should understand that the fight against separatism and terrorism should not target Islam and the right of Muslims to practice their religion.

My humble suggestion to Mr. Deng Li would be to advise his government to ease its restrictions on the Muslims of Xinjiang. The declaration of Mr. Shohrat Zakir that most "students" of the "Vocational Training Centers" have graduated is great news, even if it is not true. This shows that the Xinjiang authorities are understanding their mistakes and reflecting. The next step that XUAR authorities must do is to start a process of reconciliation in Xinjiang. They must end the civic and religious restrictions against the Muslims. They must be allowed to have passports, move freely in Xinjiang, China and all over the world, and be able to reunite with their families which have been torn apart and destroyed as a result of religious persecution. The XUAR authorities must close the notorious "Vocational Training Centers," release the religious prisoners and grant amnesty for all Muslims in XUAR. They must abrogate the "Xinjiang Uighur Autonomous Region Regulation on De-extremification" laws and allow the Uighurs to live, practice and learn their religion freely without age and legal restrictions. China should not behave like the ancient Egypt of the Pharaohs with the Muslims. Instead, it should learn from Russia, the British, the Ottomans and other great empires in our world’s history. It should strive to win the hearts and minds of its Muslim citizens and the Muslims of our planet who care for their Muslim brothers in China. By treating the Muslims as citizens and by accepting Islam as part of China’s multicultural mosaic, China will earn the loyalty of its citizens and the admiration of mankind.

China is a great and important country in our world. Its officials should preserve it with compassion and tolerance. By allowing its Muslims to freely practice Islam, the country will do a favor to themselves. They will turn their humiliated Muslim citizens into friends and great patriots.

I pray to Allah to make China listen and understand!