Could there be a new beginning for the Balkan EU membership process? 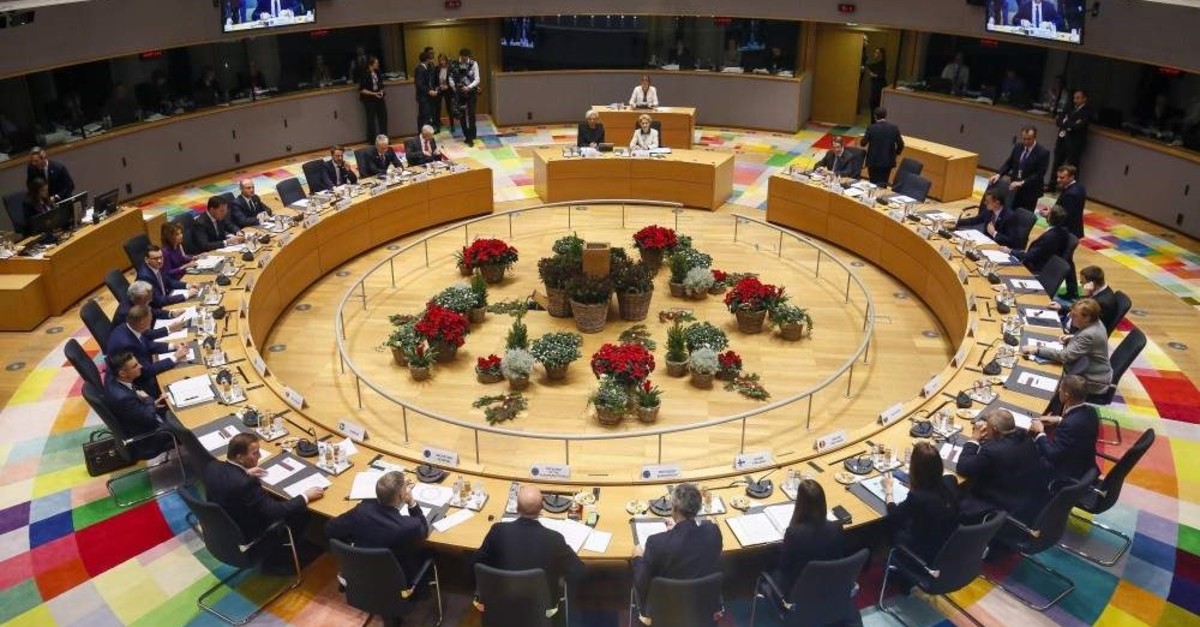 A general view of the round table meeting at an EU summit in Brussels, Dec. 13, 2019. AP
by Dilek Kütük Dec 18, 2019 1:43 am
The Europeanization process in nonmember countries was very attractive during the 1990s due to the fact that the EU was able to influence nonmember states' national policies through the norms and values agreed on in Copenhagen, transform them and also provide a nice overview for the future. So far, the European integration process has played a significant role to reestablish post-war institutions and societies, set up democratic consolidation and to start reconciliation between states and nations in the Western Balkans. However, in recent years, a number of political and economic factors are contributing to uncertainty regarding the EU membership process. These changes in the bloc have created a conservative Europe, which in some ways means stricter and slower integration processes. Balkan countries have remained widely unconcerned, which has led to noncompliance in Balkan politics and a failure to respect the rules.
The loss of reliability
The EU has successfully prevented war at home for decades. This peaceful environment has, unfortunately, not led to a more organized EU – a fact astutely felt in Balkan countries, who have lost their patience with the EU accession process. For example, North Macedonia has a pro-EU government, which resolved the dispute with Greece by changing its name. Kosova with its new government is not planning to pursue a 100% tax increase on imports from Serbia and may restart the EU dialogue process soon. Also, Albania and Serbia have good neighborly relations. That is to say, these positive improvements might lead the EU in a new direction. Unfortunately, many hopeful countries have lost their faith in the bloc's accession process after not seeing results despite extensive reforms and changes made to adhere to EU standards.
The European Council and European Commission have turned a new page with both European Parliament President David Sassoli and European Commission President Ursula von der Leyen taking office. The EU has a new administration but is still dealing with old issues. The biggest issue is the drawn-out European membership process of Balkan countries.
Should Balkan countries continue to aim for membership in the near future? As expert Claudio M. Radaelli said in one of his works, the Europeanization process is now in the phase of retrenchment. According to Radaelli, there are four possible outcomes of the Europeanization process: inertia, absorption, transformation and retrenchment. The last one implies that the national policies of member and nonmember countries become less European than they were before and that the transformative power of the EU has been reduced as a result. Additionally, the fragmented leadership makes EU-induced change improbable. France, Austria, Holland and some other countries don’t support the enlargement process. Even if North Macedonia and Albania implemented changes in favor of the EU, they are still waiting for accession talks promised many months ago. Moreover, Serbia and Montenegro still hope to be members, though they have already opened many chapters and successfully closed some of them. But the delay in opening EU accession negotiations with Albania and North Macedonia, and Serbia and Montenegro’s membership in October 2019 was received with concern across the Balkans.
The EU thinks that the future of the Balkans will remain in with EU but continues to ignore widespread frustration. On the other hand, while Russia continues to increase its political and economic influence, China has invested in the region in an effort to increase its economic expansion in the Greek port of Piraeus and its political leverage as a part of its Belt and Road Initiative, which connects a number of Balkan and East European countries. Also, leaders in the Balkans have tried to reach out to many other countries such as Japan, the United Arab Emirates and Azerbaijan to deepen relations. It can be said that Balkan countries have diversified their foreign direct investment options to reduce interdependency on EU countries; moreover, they have launched some initiatives among themselves. For example; Albania, Serbia and North Macedonia recently discussed a Balkan Schengen zone project that would lift the barriers on the movement of goods and people between the three countries as well as Albania and Kosovo. These are steps for creating their own alternatives to the EU path.
Transformative power
To sum up, in recent years, a number of political and economic factors have spread uncertainty regarding EU membership and as a result, the EU’s lack of transformative power in the region has come to the fore. Both internal and external factors affecting the functioning of the EU’s membership process and its ups-and-downs in recent years have affected its progress as a whole. Though the EU strives to keep the membership process fresh, it has stagnated. So, the new presidencies in the EU will have to deal with old issues. Especially and most importantly, they need a consensus about the enlargement process. On the other hand, Balkan countries continue to make great strides on their own.
*Analyst on Balkans