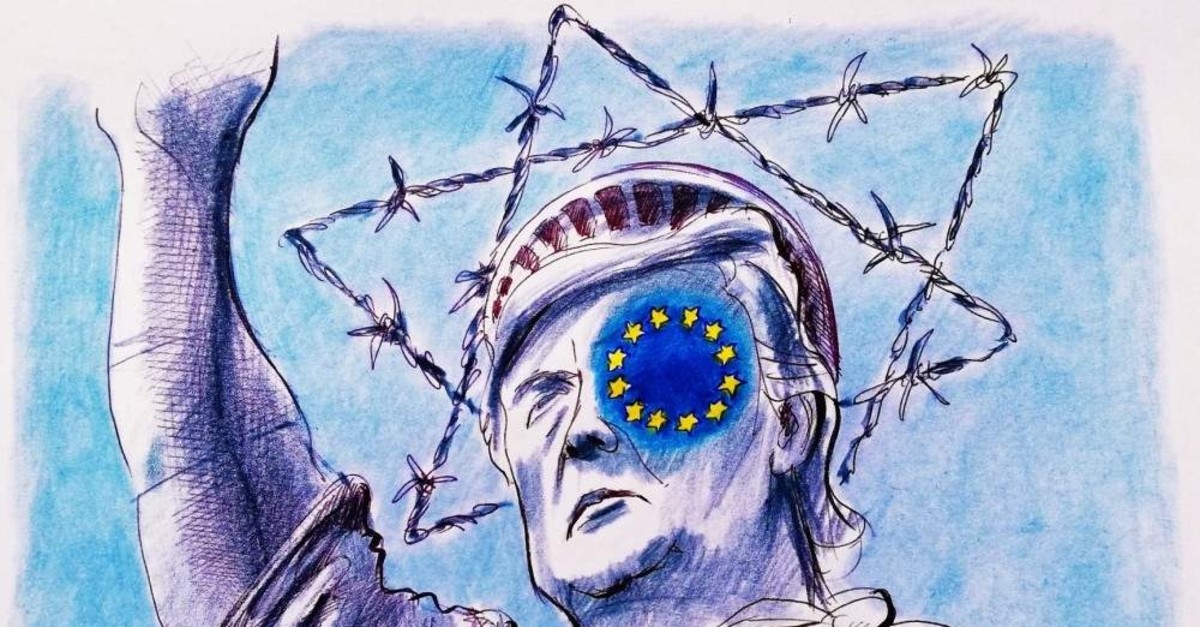 No matter how the U.S. tries to fuel the fire, the EU can lead the international community to solve the Palestinian-Israeli conflict. Standing up to the illegal settlements can be a good start for them

Luxembourg's Socialist veteran foreign minister has written to the new head of European Union foreign policy to urge a debate on recognizing Palestinian statehood. In a note to Josep Borrell, who took office recently as Brussels' chief diplomat, Jean Asselborn said a discussion could support efforts to find a "two-state" solution to the Middle East conflict. The letter suggests that member states could debate recognition at a future similar get-together.

Any decision on establishing diplomatic relations with a new state would be taken by individual member states, but Asselborn wants to at least discuss it at the EU level. "The European Union must continue to promote and support the consensus in favor of the two-state solution," Asselborn wrote to Borrell, who was Spain's foreign minister before moving to Brussels.

"One way to help save this solution would be to create a more equitable situation for both parties," he said and also underlined in this regard, "I believe that it is time to start a debate within the European Union on the opportunity of a recognition of the state of Palestine by all its member states."

In his letter, Asselborn complains that Israel's building of settlements on occupied land also endangers the peace process and is a "flagrant violation" of international law. "The recognition of Palestine as a state would neither be a favor, nor a blank check, but a simple recognition of the right of the Palestinian people to their own state," he argued.

"In no way would it be directed against Israel."

There is sympathy for this position in Europe, but the EU has not taken a united position on Palestinian statehood, regarding it as an issue for member states. European Union foreign ministers will discuss next month whether the 28-nation bloc should modify its Middle East policy amid growing concern that Israeli settlement activity and U.S. diplomatic moves are undermining hopes for a two-state solution.

The EU's long-held stance is that any peace agreement between Israel and the Palestinians should be based on the notion of two states within pre-1967 borders with Jerusalem as their shared capital. The bloc also opposes settlement expansion and insists that it is illegal under international law.

Israel and its ally the United States oppose the recognition of Palestine as a state, arguing that this would prejudice efforts to find a lasting Israeli-Palestinian peace deal. However, to some European capitals, Washington has already put its thumb on the scale by recognizing the divided city of Jerusalem as Israel's capital and by moving its embassy there.

The U.S., a biased mediator

The current U.S. administration has departed from longstanding U.S. policy, distanced itself from established international legal norms and recognized only one side's claims to Jerusalem demonstrating a disturbing indifference to Israeli settlement expansion.

Besides, the U.S. announced a new American doctrine last November that does not consider Israeli settlements a violation of international law. The U.S. has suspended funding for the U.N. agency for Palestinian refugees (UNRWA) and for other humanitarian programmers benefitting Palestinians – gambling with the security and stability of the region.

Against this unfortunate absence of a clear-cut commitment to the vision of two states, the Trump administration has declared itself close to finalizing and presenting the so-called new peace plan for the Israeli and Palestinian conflict, which the Palestinians already rejected.

Palestinians will reject any plan that does not recognize their historical just rights. Convinced that any plan that reduces their Palestinian statehood to an entity devoid of sovereignty, territorial contiguity and economic viability would severely compound the failure of previous peace-making efforts, accelerate the demise of the two-state option and fatally damage the cause of durable peace for both Palestinians and Israelis alike.

In his letter to Borrell, Luxembourg Foreign Minister Jean Asselborn said that hopes for a two-state solution are "being dismantled piece by piece, day after day," and that it is time to consider recognizing Palestine as a state.

"The policy of settlement and demolition risks replacing the two-state solution with a one-state reality, marked by perpetual conflict, occupation and unequal rights," Asselborn wrote.

The EU stance on the conflict

The EU foreign policy stems largely from the stance of the Western European countries towards the Israeli-Palestinian conflict, specifically to the outcome of the Six-Day War of 1967 when Israel conquered the West Bank and East Jerusalem, the Gaza strip, the Sinai Peninsula, and the Golan Heights.

The fate of the West Bank, East Jerusalem, and Gaza are at the center of the Israeli-Palestinian dispute to this day. Over time, Western European nations built a strong position criticizing the Israeli occupation of these territories and propagating Palestinians' right to self-determination. In the 1990s, the newly formed European Union played an important part in negotiating the Oslo Accords and established itself as one of the main donors for the Palestinian National Authority. In the following years, the EU played its most significant role in solving the Israeli-Palestinian conflict as a member of the so-called Quartet on the Middle East, which has outlined a plan for stopping the violence of the Second Intifada.

Over the past four decades, Europe has been seeking ways to advance the Israeli-Palestinian peace process. In the EU's 2017 Global Strategy, the EU argued for close cooperation "with the Quartet, the Arab League and all key stakeholders to preserve the prospect of a viable two-state solution." The EU has repeatedly expressed concern over the ongoing situation in the Middle East and contentious moves by involved parties.

Thus, in the impact of Israel's adoption of the controversial Nation-State Bill in July 2018, which seeks to define Israel as the nation-state of the Jewish people, the EU condemned the bill and declared its support for the two-state solution. More recently, the U.S. administration's recognition of Israeli sovereignty over the Golan Heights led the EU to reaffirm its commitment to U.N. Security Council resolutions 242 and 497, which effectively invalidate Israeli claims to territories occupied in war.

While the EU provides a sort of reactionary political consensus, it fails to contribute to the revival of the peace process. The most recent attempt to resuscitate the two-state solution process – primarily led by Paris – broke down in 2016 and 2017, in part due to Israel rejecting the initiative. Internal obstacles, too, have precluded a more active contribution to, and involvement in, the Middle East peace process. These include legislative, intra-institutional impediments, ideological differences among current member states, Brexit-fueled fragmentation within the EU, and a rightward political wave.

The EU itself at the same time expanded to include eastern European countries which made the formulation of a common position to the Israeli-Palestinian conflict more difficult.

On this issue, member states generally divide into two categories. Western European states, such as France and Germany are committed to EU positions to preserve the two-state solution. On the other hand, Eastern states tend to be supportive of Israel for ideological and geopolitical reasons. In this latter-mentioned group are members of the Visegrad alliance, which is comprised of four eastern and central European states – Poland, Hungary, the Czech Republic and Slovakia. In part, a closer alignment of these eastern and central European governments' positions with those of the government of Israel is the result of the ascendancy of extreme right-wing parties and politics.

The U.S. administration's recognition of Jerusalem as Israel's capital in December 2018 further highlighted the lack of an EU consensus on foreign policy matters pertaining to Israel and Palestine. While no EU member state voted against the December 2017 U.N. General Assembly resolution calling on Washington to withdraw its recognition, six eastern member states did abstain following pressure from former U.S. ambassador to the U.N., Nikki Haley.

In May 2018, Hungary, the Czech Republic, and Romania, in coordination with Israel, successfully blocked a joint EU statement condemning the relocation of the U.S. Embassy to Jerusalem, which took place on May 14, 2018, to coincide with the 70th anniversary of the establishment of Israel.

Additionally, Hungary opened a trade office in Jerusalem with diplomatic status in March 2019. This decision revealed defiance toward the publication of an internal EU memo in the same month, which called on member states to "continue to respect the international consensus on Jerusalem."

Apart from that, the EU began in the last years to engage with numerous internal issues including the effects of the financial crash and the subsequent debt crisis. Additionally, the migrant crisis, caused to a large extent by the war in Syria, turned the attention of the EU even more towards its own borders and its own safety and stability.

Regardless of these developments, the EU still remains one of the most important benefactors of the Palestinian National Authority and to this date, despite subsequent setbacks, the Oslo Agreement is still a milestone of transatlantic foreign policy cooperation.

Palestinians believe that Europe can embrace and promote a plan that respects the basic principles of international law as reflected in the agreed EU parameters for a resolution to the Israeli-Palestinian conflict.

These parameters, which the Union has systematically reaffirmed, reflect their understanding that a viable peace requires the creation of a Palestinian state alongside Israel on borders based on the pre-1967 lines with mutually agreed, minimal and equal land swaps. Jerusalem is the capital for both states, holding security arrangements that address legitimate concerns and respect the sovereignty of each side with an agreed solution to the question of Palestinian refugees.

Palestinians hope that the European governments would further commit to scaling up efforts to protect the viability of a future two-state outcome. It is of the utmost importance that the EU and all member states actively ensure the implementation of relevant U.N. Security Council Resolutions – including consistent differentiation in accordance with U.N. Security Council Resolution 2334, between Israel in its recognized and legitimate borders, and its illegal settlements in the occupied territories.

Europe is facing a defining opportunity to reinforce their shared principles and long-held commitments in relation to the Middle East Peace Process and thereby manifest Europe's unique role as a point of reference for a rules-based global order.

While the United States is standing firmly with Israel's most aggressive elements, it is time for the rest of the international community to stand firm against Israel's violations of international law in Palestinian territory and the European Union can lead this fair challenge.