Brexit: Nightmare or blessing for EU residents in UK? 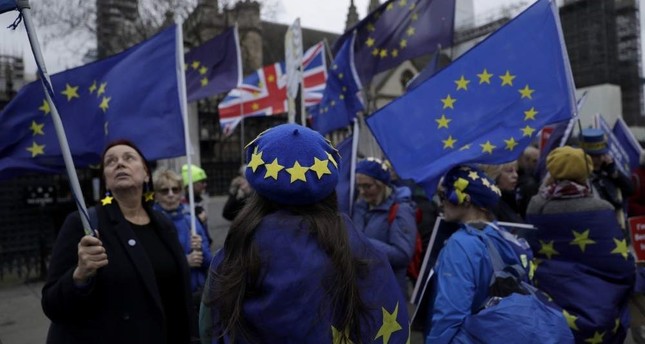 Anti-Brexit protesters hold European flags and wear European flag design berets as they demonstrate outside the Houses of Parliament in London, on the day of Prime Minister's Questions taking place inside, Jan. 8, 2020. (AP Photo)

With only 17 days to go until Jan. 31, commentators in the United Kingdom are focusing on the details and no longer on the hype that has surrounded Brexit for well over three years – a rather positive development. One issue of utmost importance is the fate of the 3.6 million EU nationals who have settled in the U.K. There are rumors and there are facts, but one thing is certain: EU citizens living in the U.K. will for sure have their own viewpoints and their own stories to tell.

There are even books written on this subject or, to be more precise, one volume in particular that conveys the feelings of EU residents unhappy with the developments. "Polish Girl in Pursuit of the English Dream" was penned by Monika Wisniewska, one of the first Polish migrants who, almost one and a half decades ago, came to the U.K. after the British government allowed free movement as part of the country's EU membership.

Coming to the U.K. meant the realization of a dream for Wisniewska as in her own words she told me that, similar to millions of people who arrived with just a bag of clothes and hardly any money, there was something unique and very valuable in her luggage, figuratively speaking: a heart filled with hope and excitement about finding a great job and promising career.

This is exactly the kind of person any country would want and welcome with open arms – future taxpayers, not welfare seekers; men and women ready to roll up their sleeves and fully contribute to the social fabric and economic wellbeing of their newfound host nation.

Although it was of course not smooth sailing securing a job and settling into a new life, those who managed to stayed and spread the good news, and many more followed in their footsteps. But what quite a few new arrivals had not realized before heading to the U.K. was the underlying current of "one day we want to leave the EU," culminating in the fierce campaign that ultimately led to the fateful 2016 Brexit referendum.

During that campaign and thereafter, not only those who resisted calls for an ever closer political union but unfortunately those misled individuals who added their hate-filled doses of racism and xenophobia into the mix took center stage.

Hence, one is well advised to distinguish between two developments. On one hand, there is the rise of anti-foreigner sentiment as witnessed in almost all parts of today's Europe, including the ascent of far-right and extreme political movements. Due to the first-past-the-post electoral system in the U.K., the chances of winning any seat are slim and thus proponents of those bizarre ideas take to social media. Wisniewska came across quite shocking posts, as well as slurs elsewhere, including, in one instance, "Polish go home" sprayed on a wall. These were not specifically targeting her, but she nevertheless felt abused and verbally attacked. It seems reasonable to assume that anyone who sees or hears such abuse starts to question whether he or she really lives in the right place, the right country.

On the other hand, however, there is the legal dimension attached to Brexit, and indeed a number of things that are going to change are already worrying EU nationals. First and foremost is the so-called EU Settlement Scheme. Accessible via a handheld device or by post, the scheme requires EU nationals to register before the actual exit date, which is not expected to take place before January 2021 at the earliest.

Let's recall that the U.K. does not employ a continental identity card system. EU nationals arriving in the country intent on working or settling simply applied for a tax number, called a national insurance number. New arrivals also added their names to the electoral register to be able to vote in local and European Parliament elections. Besides that, there was no formal residency card application process.

However, some EU citizens in the U.K. are considering packing their bags because the settlement scheme is difficult to navigate, with those registering most likely required to produce official letters and documents detailing their five-year, uninterrupted U.K. residency. If a resident has been in the U.K. for less than five years, he or she would be given pre-settled status to be upgraded later. The only difference is the resident would not be able to access social benefits except for health care under the latter status.

The debate centers around two points. First, why is there a need to register and not give automatic permanent status to all EU residents currently living in the U.K? Second, what will happen to future new arrivals? Can they ever make their move in the same way 3.6 million of today's EU U.K. residents – just over 300,000 of whom are Irish nationals who will enjoy free movement even after Brexit – did?

The prime minister has announced that there will be an Australian-style points-based immigration system that no longer distinguishes EU nationals from the rest of the world. Yet, it remains to be seen what will happen to U.K. nationals living in the EU. Will the same approach be taken or could there be a last-minute middle ground formula to be implemented?

Still, in regard to the settlement scheme, it should be clearly stated that U.K. nationals moving to another EU country always had to identify themselves and were required to stay longer than four months in the case of having secured a job, studying, retiring with a pension or having enough personal financial means to not need to ask for government subsidies or social welfare funds, with one exception being unemployment benefits after he or she had paid taxes for minimum period of time. In return, the U.K. national would obtain a photo ID sufficient for traveling across the continent; in other words, he or she had a regulated yet legal and always fully documented status. And they were never discriminated against.

Now that the U.K. is embarking on a path to fully document EU nationals, one should not be afraid of it. After all, an EU citizen moving from one EU country to another always had to wait four months before registration.

What I understand from reading Wisniewska's commentary, however, is something completely different; something that worries her and other EU residents. How can a post-Brexit Britain continue to welcome foreigners, including EU nationals, with open arms and treat them with the same respect that U.K. nationals expect to receive in continental Europe?

How can the overheated Brexit debate now be channeled into calmer waters, allowing for frank yet fair public discourse?

"Polish Girl in Pursuit of the English Dream" is not a verbal warmonger's work of fiction. On the contrary, it sums up the hopes and legitimate expectations of the vast majority of EU nationals who in the past had made the United Kingdom their new home, and why they came here in the first place. Hers is most definitely a voice that should be heard.

So, is Brexit a nightmare or a blessing for EU expats in the U.K.? Probably neither. Once the Brexit dust settles and life returns to normal, chances are that compromises will be found between Brussels and London, and the U.K. will remain a magnet for people from around the world who come because they like the British way of life and not because they hate the EU.

In this context, having British nationals contributing to another EU economy and its social fabric is as important as EU nationals continuing to doing the same in the U.K.

Share on Facebook Share on Twitter
Previous in Op-Ed Iran's leaders continue to play a game of political fortitude and... Next in Op-Ed The last decade has been full of various examples from different parts...
DAILY SABAH RECOMMENDS