Is imperial geopolitics coming back? 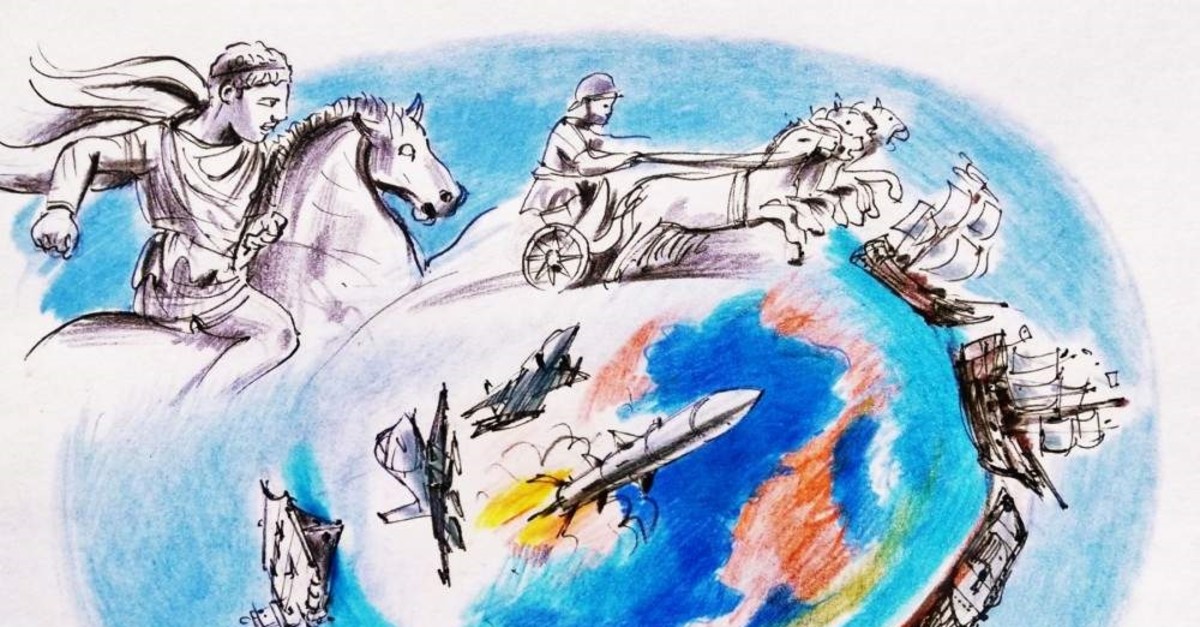 The last decade has been full of various examples from different parts of the globe demonstrating the growing allure of geopolitical thinking in international politics. Regardless if one talks about great powers like the United States, Russia, China and the EU, or middle powers like Turkey, Iran, Germany, Brazil and India, foreign policy choices of many countries across the globe evince increasing doses of geopolitical calculations in the background. In order to better comprehend today's geopolitical rivalries, one needs to first understand how imperial geopolitics shaped international politics in the past.

Traditional geopolitics tries to examine the relationship between geography and politics and ascertain the impact of geographical location and characteristics of states on the interplay of international political competition among them. Geopolitics was first understood as an objective scientific exercise whose primary reason was to offer ironclad statements on the impact of geographical location and physical terrain on the ability of states to maximize their power in international politics. Mastering the universe was considered to be paving the way for regional and global primacy. From the second half of the 19th century until the onset of the Cold War era, geopolitics was mainly an imperial exercise undertaken by great powers. Halford Mackinder, a geographer in the United Kingdom, is considered to be the first important geopolitical thinker. His heartland theory assumes that the particular power that controls the Eurasian landmass would eventually control global politics and master the universe. Unlike Mackinder, Alfred Mahan, a military historian in the United States, argued that the road to global primacy in international politics would go through mastering oceans and other sea lines.

However, imperial geopolitics was closely associated with Germany's foreign policy practices, a latecomer in the struggle for building colonial empires across the globe. Friedrich Ratzel and Karl Haushofer are the most notable German geopolitical thinkers and their thoughts on geopolitics profoundly shaped the foreign policies of Nazi Germany during the interwar years and World War II. To Ratzel and Houshofer, states are like living organisms that require lebensraum, viz. living spaces, to survive in the anarchical international environment. Just as individuals require a healthy body and mental condition, states are also in need of fertile and defensible psychical terrain as well as robust and uncontaminated people to survive in international politics. Darwin's "survival of the fittest" characterization of interpersonal relations would apply to interstate relations quite well. Hitler carried such thoughts one step further in arguing that the German/Arian race was superior to all other races and its purity needed to be ensured through the elimination of Jews, transsexuals and Roma from the German nation. The idea that countries' geographical location is their destiny is very much informed by such imperial geopolitical thinking. Geography serves either as a power multiplier or a constraint on maneuvering capability.

Traces of such thinking are quite visible in the foreign and security policy practices of many countries across the globe. To give an example, Russian elites and people alike tend to believe that Russia should never let hostile countries take control of territories to Russia's west and south mainly because Russia is highly indefensible from these directions. The reason why Russian leadership, particularly the current Russian President Putin, is very much against the idea of NATO's enlargement toward post-communist countries in Central and Eastern Europe, as well as the Caucasus, is that Russians believe their country would be surrounded by hostile nations and this would be a direct assault on Russian geopolitical interests in the post-Soviet area. From the Russian perspective, Russia is a great power and its geopolitical primacy in the post-Soviet area should be recognized by other great powers.

Russia is also quite adept in using its geographical location and rich natural resources in its relations with neighboring countries. Being the main gas and oil provider to many countries in Europe, Russia believes that this provides it with huge leverage in its interactions with the countries that import such resources. By periodically increasing the price of oil and gas and by pushing further for the construction of alternative pipelines tying Russia to individual European countries, such as the Nord Stream II pipeline or Turk Stream pipeline, Russia has been forcing the countries lying in its neighborhood to toe its line in foreign policy. Russian geopolitical tradition is also immersed in the ideas that Russia is entitled to its sphere of influence and Russia is an imperial nation that would do well to enlarge its sphere of influence if she wanted to achieve its territorial integrity and preserve its sovereign democracy.

Similar to Russia, China also adopts a very lucid geopolitical approach in its foreign policy. While investing in area-denial and anti-access military capabilities aims at curtailing the access of the United States to East China and South China Seas, the construction of massive infrastructure projects in the larger Eurasian region and across the globe targets connecting many states to China. Surrounded by more than a dozen countries, Chinese leadership tends to believe that China's territorial security would best be ensured if all these countries were connected to China through diverse economic relationships and multiple infrastructural projects. The idea that China is the Middle Kingdom and sits at the center of regional politics in Asia is quite geopolitical.

Another manifestation of such geopolitical thinking can be observed in the context of Turkish foreign policy practices dating back to the early years of the Republic. It has already been a part of a Turkish security culture that Turkey is the inheritor of the Ottoman Empire and all other countries that lie in Turkey's vicinity gained their independence through the wars waged against Turks. Such thinking seems to have led the majority of Turkish people to internalize the ideas that Turkey is surrounded by enemies to all directions and Turkey's territorial integrity and national security would be ensured if Turkey had a powerful military and pursued a prudent and vigilant foreign policy approach.

Lying at the intersection of three different continents and possessing vital sea passages like the Dardanelles and Bosporus straits, Turkey is concurrently both secure and insecure. Its geographical location and the physical characteristics of its terrain can be seen as assets and liabilities in Turkey's relations with other countries. For example, while Turkey had to join the western camp in the early years of the Cold War era with a view to resisting the territorial claims of the Soviet Union, it had to organize a military incursion into Cyprus in the summer of 1974 to ensure that the island did not come under Greek Cypriot rule, which would have otherwise curtailed Turkey's maneuvering capability in the Eastern Mediterranean region.

Similarly, Turkey feels exposed to myriad security challenges emanating from the wider Middle East due to its proximity to the region. Turkey also tries to leverage its transit country role in its relations with the European Union. One of the core arguments of those who think the European Union would do well to admit Turkey as a member is that Turkey would help lessen the EU's excessive reliance on Russian gas and oil resources. Turkey would simply connect the energy thirsty European Union members to energy abundant countries in the Caucasus, Central Asia and the Middle East.

The idea that geography is destiny manifests itself in the security culture and practices of other countries as well. For example, while the United States is mainly a sea power trying to project power across the world through its blue water navy and marine forces, Russia, China and Germany are textbook examples of land powers. Land powers tend to invest a lot in their armies and defensive military capabilities mainly because they feel surrounded by numerous neighboring countries. On the other hand, sea powers do not have too many borders with other countries and benefit from their island status. The United States is surrounded by two vast oceans to the west and east and it has relatively two weak neighbors to the north and south. It is not located in close proximity to many conflict-riven places in the world and developments in far distant places tend to have a minor impact on core American security and economic interests.

A similar situation can be observed in the context of the United Kingdom, which is an island country and has long benefited from its splendid isolation. Rather than taking an active role in great power competition among land powers of the Eurasian region, both the United Kingdom during the 19th century and the United States during much of the 20th century played offshore-balancer roles. Whenever the prospects of a Eurasian land power laying claim to regional hegemony increased, they worked for the formation of counter-hegemonic alliances and at times sent troops abroad to help defeat potential regional hegemons. The United Kingdom played such a role during the Napoleonic Wars in the early years of the 19th century. The entry of the United States to World Wars I and II evinces a similar logic on the part of American statesmen.

The same logic is now quite evident in the growing efforts of the United States to help contain the rise of China in East Asia. Leaving behind the decades-old engagement policy of the previous administrations, President Trump has defined the rise of China as the No. 1 geopolitical challenge leveled against American primacy in global politics. To make sure that the United States maintains its hegemonic role in global politics and China does not ascend to regional hegemony status in Asia, the Trump administration is now pursuing a containment policy. Not only the scope of American military deployment to the region widened but also the United States is now doing its best to ensure an anti-Chinese block emerges. Both the Free and Open Indo-Pacific Initiative and the so-called Quad Initiative aim to create a counter-Chinese power block by pushing the traditional American allies in the region to gear up their military expenditures and improve security cooperation among them.

It is now past time to take stock of imperial geopolitical thinking to make sense of current geopolitical rivalries.